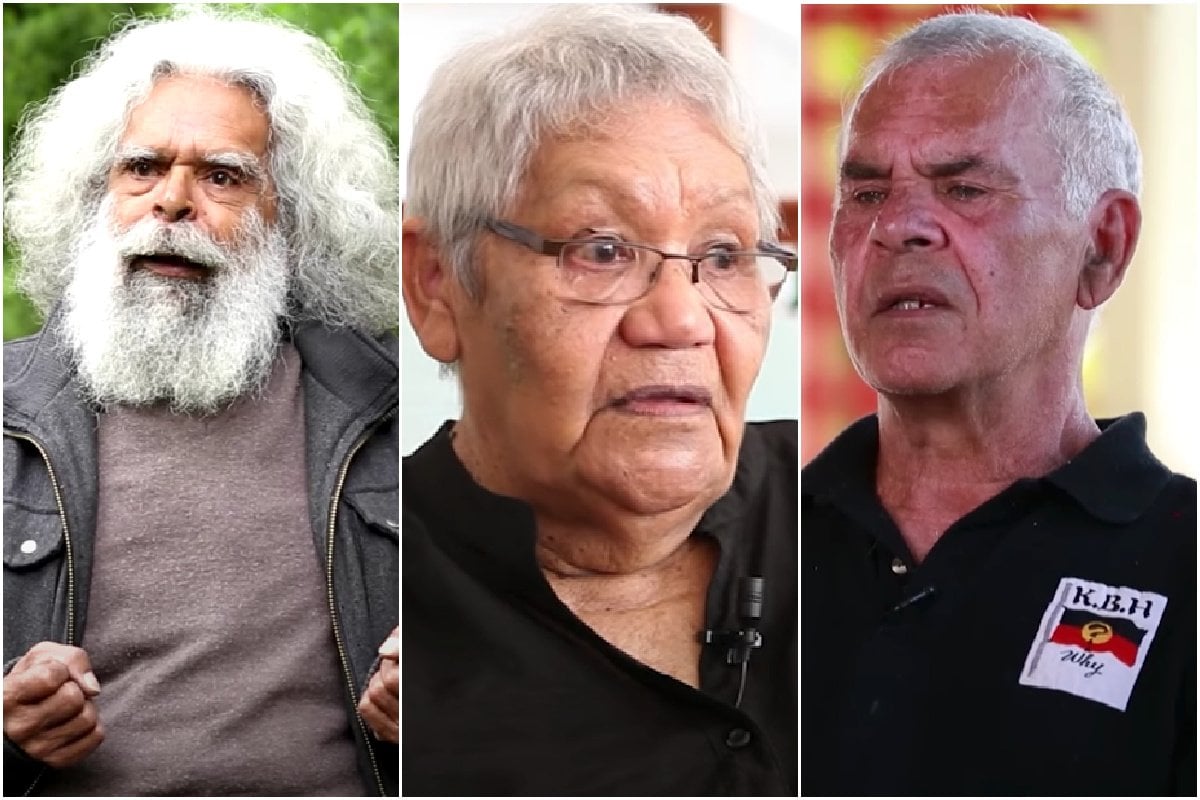 "I was stolen from Royal Women's Hospital and raised in an institution. The program in there - apart from the sexual abuse and the unusual punishments - was to persuade me against any sense of my Aboriginality," - Actor Jack Charles, age 78.

"I am one of eight children that were removed all at once....the trauma was incredible to the point where I've forgotten two years of my life. I know in those two years is something pretty traumatic...which is okay, I believe my spirit protects me from going there," - Aunty Lorraine Peters, age 82.

"When we were born we were given a spirit and a soul by the creator but they turned around and dismantled that, or flogged it out of us. I'm still going through it...never ever have I had that feeling of home and being allowed to be home again," - Michael Welsh.

This is not historical pain.

There are thousands of Stolen Generation survivors living across Australia, still grappling with the impacts of what happened to them as children.

A number have shared their stories with the Healing Foundation. But for many more, it's too painful to talk about.

This week, National Reconciliation Week, new research from the Australian Institute of Health and Welfare, commissioned by the Healing Foundation, has shone a light on just how real that trauma is.

It found that survivors of the Stolen Generation over 50 - of which there are more than 27,000 - face worse life outcomes than other Indigenous people.

71 per cent of those survivors rely on government payments.

43 per cent have had days without money for basic living expenses in the past year alone.

Compared to other Indigenous people over 50, survivors are more likely to be living with ill health and other stressors and are 1.4 times more likely to have poor mental health.

HOUSING: Compared to the general non-Indigenous population aged over 50, #StolenGenerations survivors of the same age are:
- 4.1 times the rate of not owning a home
- 6.4 times the rate of living in an overcrowded house@AIHW data #MakeHealingHappen #auspol #NPC pic.twitter.com/QJheoL97xR

The Healing Foundation says survivors fall into the "gap between the gap," as they continue to grapple with a life and a culture stolen from them in their formative years.

By 2022, all living stolen generations survivors will be 50 years and over and be eligible for aged care.

As CEO Fiona Cornforth told AAP, "We have a unique opportunity with the current reforms in the aged care sector to get care systems right for the special health, cultural, and healing needs of stolen generations survivors."

What happened to the Stolen Generations?

Forcible removal was the reality for an estimated one in three First Nations people, who were taken from their families by government policies until as recently as the 1970s.

As Ms Cornforth, a Wuthathi woman herself, told Mamamia's news podcast The Quicky, "the idea was that our culture was inferior and wasn't civilised."

Listen to Fiona's interview below. Post continues after podcast.

They were forced to assimilate into non-Indigenous society and culture and punished for practising their own. As Ms Cornforth explains, "the event - the forced removal - happened over many decades in the past, but the impacts are still unaddressed and carried across generations today."

Australians Together reports that many children were psychologically, physically, and sexually abused while living in state care or with their adoptive families.

They were also often told their families didn't want them, that their parents were dead, that their culture was wrong, and were often forced to live in harsh, cruel conditions.

The reality of intergenerational trauma.

More than one third of adult Aboriginal and Torres Strait Islander people are descended from older generations who were forcibly removed from their families.

As Australians Together explains, it's not just survivors themselves that experience high rates of depression, anxiety, post-traumatic stress and suicide - their parents, families and descendents also face greater disadvantage.

"Trauma is a human experience, and the experiences of trauma associated with the events that happened to Aboriginal and Torres Strait Islander people like the forced removal of children from loving and nurturing families will cause any human being to be in a state of distress. And so what the human body does in response is fight flight or freeze. The central nervous system does that... to protect us. If I am in a place of strength, I can see all positives and options and choices. I am completely aware of everything in front of me to choose from.

"But if I am in a place of distress, I can only fight, flight or freeze. And there are so many systems that our people have to interact with every day that perpetuate trauma and re-trigger those experiences. Like the justice system, the education settings and health systems. Again our opportunities and our possibilities are reduced to that fight, flight or freeze. And to protect ourselves and our families we are less likely to encourage our families to interact with those systems," Ms Cornforth explained.

"The evidence is compelling. Removal is the origin of trauma for too many of our peoples. Yet it is simply not considered or accounted for in policy, in funding decisions, or service delivery."

In a pre-budget submission, the Healing Foundation put forward several recommendations it says will fulfil the aspirations of the 1997 Bringing Them Home report, which came as a result of a national inquiry that investigated the forced removal of children.

It was the first time this tragic chapter of our nation's history was presented in any kind of public or formal way, and came up with 54 recommendations to address the ongoing trauma caused. They included a national Apology, which was given by the then Prime Minister Kevin Rudd in 2007. But many of the recommendations remain outstanding.

The Healing Foundation says top priorities moving forward include a survivor and government co-designed redress scheme for survivors and government investment in healing programs focused on counselling and cultural reconnection.

As Ms Cornworth explained to The Quicky, "We're in an unprecedented time where action informed by healing and trauma awareness is in the palm of our hands. We have so many more resources than we once did about what effective healing looks like. I would encourage every individual to have a look at where you work, your sector, the system you're a part of.... and see what you can do to change things so it's an equity approach. It's not diversity or inclusion, it's an equity approach."

This National Reconciliation Week, the theme is: More than a word. Reconciliation takes action. Increased awareness and education as Stolen Generation survivors enter aged care, as the Healing Foundation suggests, would be a good place to start.

If you need health or wellbeing support, call Lifeline on 13 11 14; or visit Gayaa Dhuwi for more options.

National Reconciliation Week (NRW) occurs on the 27 May - 3 June and is a chance for all Australians to celebrate Aboriginal and Torres Strait Islander culture. You can find out more here.