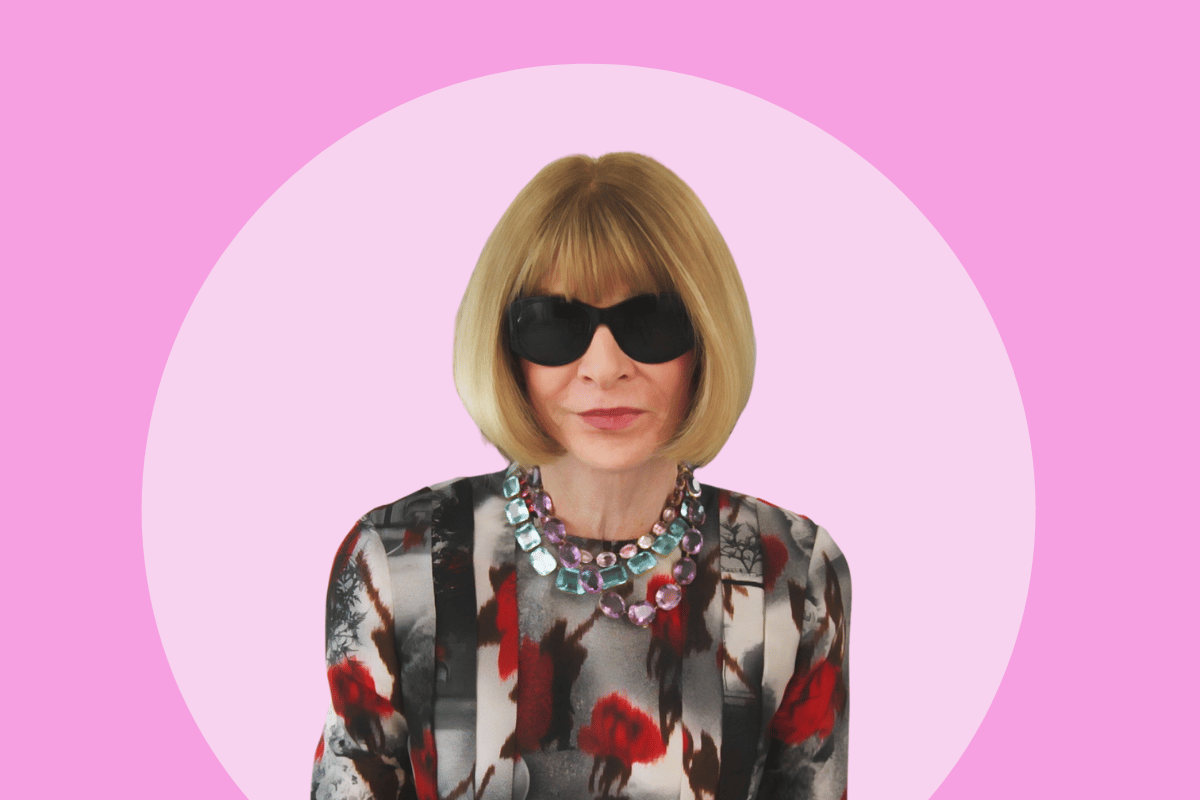 A full fringed bob and large dark sunglasses. Her look is almost as iconic as she is.

For more than 30 years, Anna Wintour has held the position of Vogue editor-in-chief. Not too bad... And she is also Vogue’s global editorial director, and Condé Nast’s global chief content officer too.

While Wintour is integral in defining the zeitgeist, she is arguably as well-known for serving as the inspiration for the ruthless character Miranda Priestly, played by Meryl Streep in The Devil Wears Prada.

But she also remains a bit of an enigma.

Enter respected New York-based fashion and culture journalist, Amy Odell, who illuminates Wintour with her new book, ANNA: The Biography. It’s already receiving praise for being the most revealing portrait of Wintour ever published, and we love tea, so…

In an excerpt published by Time ahead of the book’s release next week, this is what we learned.

1. Wintour is “militant” in planning the Met Gala.

"Where is everybody? It’s time. Where are they? Can you tell me where they are?", are the questions Wintour is heard demanding, writes Odell.

It's just as well that her Vogue staff have all the answers.

They know the prearranged arrival time of each guest, and when they are on their way, the car in which they will arrive, and any unfortunate outfit emergencies that may unfold en route, like say, a broken zipper, that needs addressing before the grand reveal of one's outfit.

2. But she ain't so great with names.

Odell writes, “As with her assistants, Wintour has had a habit of not learning the names of some at the Met that she has worked with - year after year - to plan the party, a former staff member recalls.”

“Sometimes she addresses them as 'you' and points; other times she calls them variations on their names. Her directives have often been so absurd the Met team just laughs them off.”

So, does anyone remember Emily - I mean, Andy - from The Devil Wears Prada?…

3. “Can you please tell her [Kim Kardashian] to sit down?”

Remember that custom wet-look latex Thierry Mugler dress that Kim Kardashian wore to the Met Gala in 2019? You know, the nude coloured one with individual crystals hanging off it, that was air-gaspingly tight?

So tight, in fact, that Kim did not take her seat at the Gala dinner.

“Can you please tell her [Kim] to sit down?” Wintour asked her personal friend and former longtime West Coast director of Vogue, Lisa Love.

"Love had to explain that, actually, Kardashian physically could not sit," Odell writes in the book.

4. Serena Williams is "in" and the Hilton sisters are "out".

It’s very simple, in Wintour’s world you are either “in” or “out”. And the category in which she deems an individual, can make or break a person’s social status and... spirit.

Some are always “out,” says Odell, like “low-performing assistants, the Met’s event planners who tell her she can’t hang a dropped ceiling over a priceless statue, the Hilton sisters.”

Then there are those who are always “in” - for their “success, power, creativity and beauty”, including the likes of Serena Williams, Tom Ford, Roger Federer, and Michelle Obama.

But don’t get too comfortable if you’re in the “in” crowd. You can always be shafted, as were designers André Leon Talley and Isaac Mizrahi.

Despite support from Wintour that spanned three decades, following the closure of Mizrahi’s label in the late ‘90s after a loss of financial backing, Wintour went cold on the relationship.

Mizrahi later rose from the ashes to relaunch, and was expecting Wintour to take her front-row seat at one of his shows in the early 2010s. After 20 minutes, it was clear: She was a no show.

“It was a blow,” Odell quotes Mizrahi from his memoir, I.M. “I took it as a sign that my years as a couturier were waning.”

But the bright side? It seems you can also clammer out of the “out” bucket and back into “in”, as Kimmy K has proven. It was only in 2014 that Wintour implied Kardashian and now-ex-husband Kanye West were not "deeply tasteful".

Wintour and fallen Hollywood director, Harvey Weinstein “seemed to have a relationship that went beyond a typical industry friendship,” writes Odell.

She adds that their “decades-long relationship” afforded him generous and unique allowances. Weinstein was permitted to split the cost of a table at a Met Gala with Jimmy Choo co-founder, Tamara Mellon, and was discreetly pulled from a red carpet queue so he wasn’t forced to wait.

Most tellingly, Odell says that Wintour had to be dissuaded from having lunch with Weinstein in the wake of the damning New York Times story that broke in 2017, which detailed sexual assault allegations against the Hollywood producer.

"It took a full eight days after the Times story came out for her statement denouncing his behaviour to appear in the paper," writes Odell.

There was also Mario Testino and Bruce Weber, Vogue’s famed photographers who were also accused of sexual misconduct as #MeToo gave flight.

“This time, however, Wintour took a different course of action, announcing that month that, despite them being her personal friends, Vogue would stop working with them right away,” writes Odell.

Oh, and there was Galliano.

Yes, the foul-mouthed Dior designer who declared his love for Hitler and went on an antisemitic tirade in a French bar in 2011.

Following the fallout from his rant, Wintour managed to get Galliano a job at Maison Martin Margiela (now Maison Margiela), and, writes Odell, Wintour “was the one who called Parsons to ask if Galliano could have a faculty appointment”.

“The school was prepared to give him a three-day class to teach, but was forced to cancel it after a wave of backlash”.

"While there are those who think Wintour should be fired or forced to resign, Wintour’s influence remains profound and unmatchable," muses Odell in the book.

After decades at the helm, at 72 years old, "Wintour has built her own kingdom. And the world’s most beautiful, most powerful people are living in it," she writes.

“The rest are just looking on.”

Keen to read more from Rebecca Davis? You can find her articles here, or follow her on Instagram,    @rebeccadavis___

Reply
Upvote
1 upvotes
God I'm glad I'm not famous or a part of this whole "society" thing, it sounds exhausting. All the "who's in, who's out" stuff is so pointless, it makes me wonder if these people stopped developing emotionally in high school.
A
azzuri 4 months ago