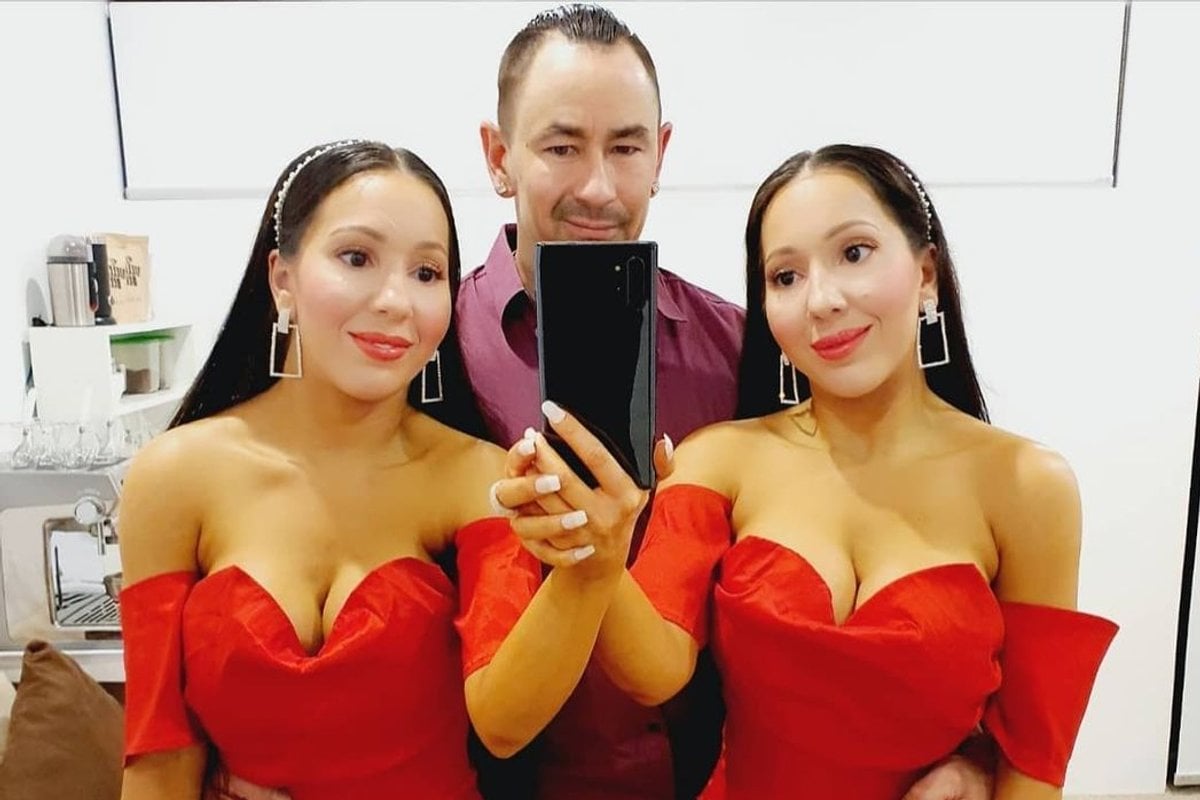 So close, in fact, that the identical twin sisters share a boyfriend. Oh, and they want to both carry his babies at the same time.

The Australian women, who have claimed the title of 'world’s most identical twins' aren’t shy about their unusual lifestyle, and frankly, they really don’t care what anyone else thinks.

In a video posted to their YouTube channel in 2017, the Perth twins first spoke in depth about their plans to start a family with their shared boyfriend, Ben Byrne.

Ideally, they said, they would fall pregnant at the exact same time and their children would be born as close together as possible.

“We want to experience pregnancy together, we want our bodies to look the same. Because we’re so close we always want to be together,” Lucy said at the time.

But on the topic of how to make that happen, the 33-year-old sisters weren’t sure.

“It is a bit of a dilemma,” Lucy said. “We know that’s where nature comes in, we can’t control these things. You can’t force these things.”

By December 2018, they hadn’t fallen pregnant, but their plans hadn’t changed.

They told the Today show that they still wanted to have babies with Ben, and, if the law preventing polygamous marriages could change in Australia, to marry him one day.

“Our mum is actually convincing us to go naturally, give birth naturally, so I don’t know how that’s going to work [because] we need to be pregnant at the same time,” one sister said.

Lucy and Anna dress alike, eat exactly the same meals, do the same workouts and have undergone the same plastic surgeries to keep their bodies, and their lives, as identical as possible.

“We do everything together. We’re never more than a few metres apart, we work [together]. We share everything,” they told a UK talk show in 2016.

“You name it and we do it. We’re never apart. I don’t think we’d function without each other. We have separation anxiety. We’re bound to each other.”

But perhaps the most surprising aspect of their relationship is that they share a boyfriend.

Their relationship with Ben Byrne – who is a fraternal twin himself – is not new. They’ve been dating for 10 years.

“The first night we met him, we both kissed him,” Anna told the New York Post.

“It was great from the start. We just hit it off straight away. It’s so much easier for us to share a boyfriend.

“I don’t mind that he comes over to kiss Lucy, because then he’s going to kiss me.”

During their interview with This Morning in 2016, they explained how the relationship could work so well for so long.

“He understands we’re together 24/7. He never favours one twin to another. There’s never any jealousy. If he kisses me, he’ll kiss my sister straight away,” one twin said.

???? TWO TO LOVE ???? Whose SUBSCRIBED to our Youtube Channel? ???? ANNA AND LUCY ???? #twinningandwinning #bloggerstyle #fashionmodels #styleinspo

The twins revealed that they share the same bed with Ben, and will have sex with him at the same time.

They have also said that Ben will hold both their hands during a movie.

In fact, for them sharing a boyfriend is much easier than having two separate partners.

“We’ve had separate boyfriends in the past and it hasn’t worked, but now it’s much easier and its great,” they told a Caribbean news website in 2015.

“We’re with each other 24/7, me and my sister; it’s just easier to share a boyfriend because we’re always together.”

But of course, while the relationship works for them, they acknowledge that others won’t be so open-minded.

“People can judge all they want, but we’re just doing what makes us happy,” they’ve said.

And on the topic of pregnancy, Anna told her YouTube followers: “I know there are a lot of people out there thinking WTF, but it’s our body and our life and you just have to respect our choices.

Reply
Upvote
1 upvotes
I mean, each to their own, but I just find this icky
L
luvlee a year ago