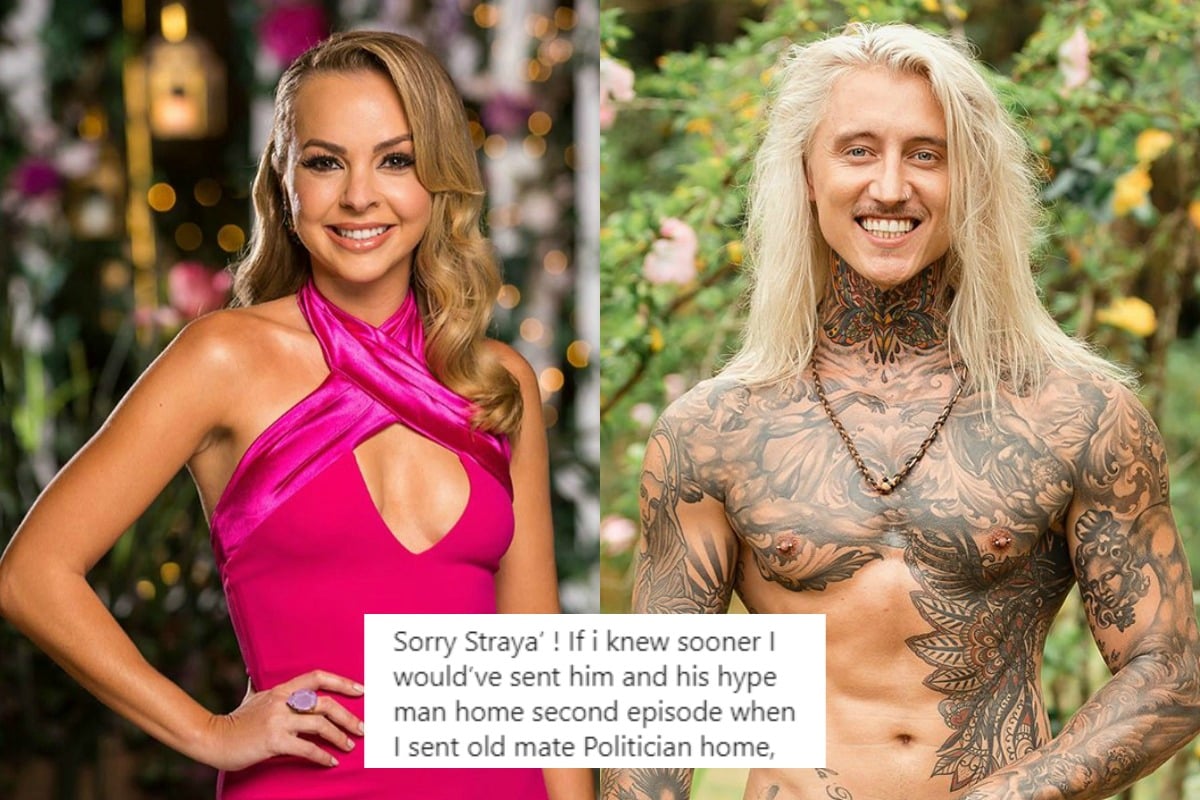 The drama has continued to play out both on and off screen during this season of Bachelor in Paradise.

While some cast members have complained about the show's editing process, others have questioned some contestants' bad behaviour (ahem Ciarran) and their intentions for being in Paradise (ahem Ciarran). And one of those people includes former Bachelorette Angie Kent.

For the past couple of weeks, Angie has been spilling all the tea by calling out just how genuine (or ingenuine as Jamie would say) the contestants were from her season of The Bachelorette. And we have been not-so-secretly living for it.

So to keep you up to date on all the Bachie drama, here's every single thing Angie has said about this season of Bachelor in Paradise.

Angie apologises to... the entire nation.

After last night's episode of Bachelor in Paradise, Angie took it upon herself to apologise to Australia for not sending Ciarran and Timm home earlier on The Bachelorette.

The reality TV star commented on a photo shared by the Bachie Funny Instagram account that showed a scene from Mean Girls where Miss Norbury asked the class full of familiar Bachie contestants "who has ever had feelings for Ciarran Stott?"

And how many of ya now have regrets? 🙋 #bachelorinparadiseau

"Sorry Straya’! If I knew sooner, I would’ve sent him and his hype man home second episode when I sent old mate Politician home, because NO ONE f*cks with my sisterhood," Angie commented on the post.

"Sorry that at some point we were all victimised by Regina George," she added, referencing the film.

And clearly she wasn't the only one who thought so.

Angie calls out the "pretend daters".

Last week, Angie posted a video to her Instagram stories, calling out the guys from her season of The Bachelorette who she claimed were only on the show to get into Paradise.

"Me sitting here knowing that 98 per cent of the fellas from my season were cast and only there to get on Bachelor in Paradise," she captioned the video of her sipping wine.

"This season should have been renamed '98 per cent from Angie’s Season of The Bachelorette, in Paradise. Love that for me."

And it's not hard to see why she thinks that. Contestants Timm Hanly, Ciarran Stott, Glenn Smith, Jamie Doran, Jackson Garlick, Matt Whyatt, Alex McKay, Scot Fuller, and Niranga Amarasinghe were all from her season of The Bachelorette. 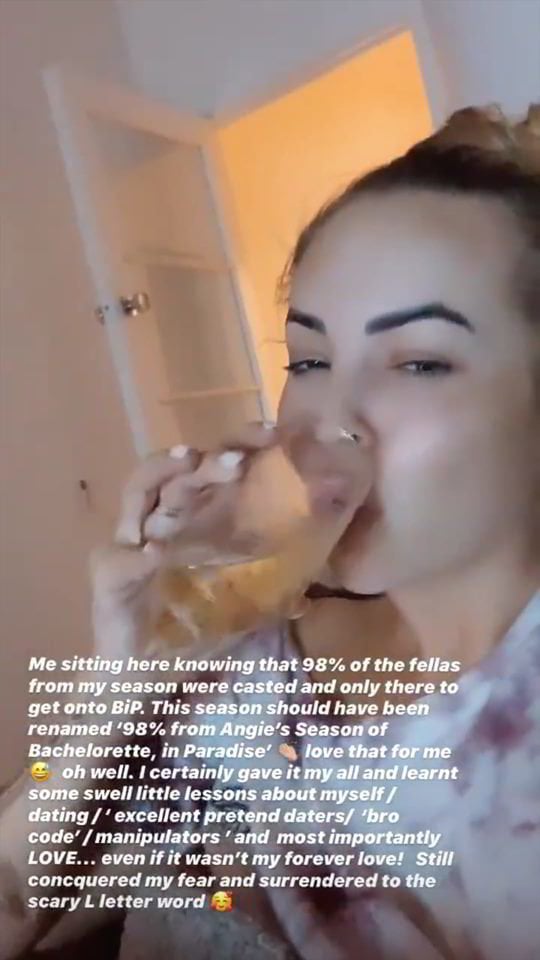 Angie went on to explain that she learnt some important lessons from her time on the show, particularly when it came to "pretend daters".

"I certainly gave it my all and learnt some swell little lessons about myself / dating / 'excellent pretend daters' / 'bro code' / 'manipulators' and most importantly LOVE... even if it wasn’t my forever love!"

The So Dramatic! podcast later shared Angie's video on Instagram. And former Bachelor in Paradise contestant Jules Bourne had a few things to say about it.

"Is it really any of [Angie's] business what any of the dudes do after bachelorette, after she solidifies her *NON-INTEREST* in them all," he wrote, directly tagging Angie.

"I mean she has every right to be mad BUT, *technically*... I feel she shouldn't be upset about what the rest of the dudes do because, technically her intentions should be to 'end up with the one and only'." 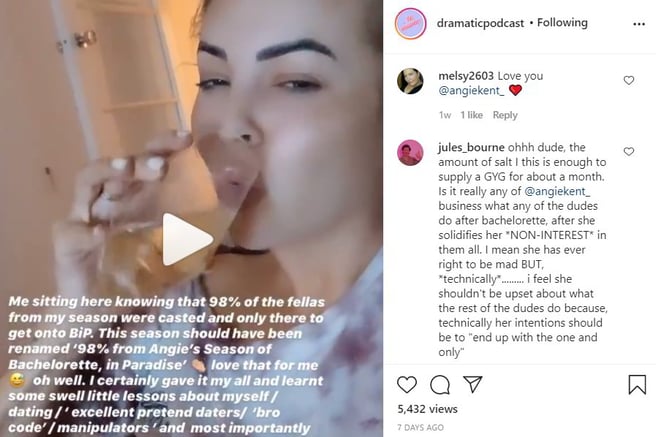 Angie responded to Jules saying it's not about what the guys have decided to do after The Bachelorette, but about the ones who lied about going on the show for genuine reasons.

"It’s not about that dude. It’s about the lying. That a lot of them have admitted they haven’t come on for genuine reasons when I 100% did. So they can do around saying this and I respond with how I feel, and I’m shunted for speaking my truth in response to it all... I can state how I feel. I lived it," she replied.﻿

Another commenter also questioned Angie's expectations for going on the show.

“Was it not naive for Angie to think everyone was 100% genuine? Surely she had to know some of them would use the opportunity to gain fame and opportunities, no?," they wrote.

“Is it also not a bit full of yourself to think a dozen guys would all be into you?"

But Angie wasn't having a bar of it.

She responded saying that she didn't expect all 20 men from her season to like her. But she did hope that "the men who were acting like they were equally interested and invested in what we had going, was the truth".

“If you wanna stay on to dick around you can. But don’t pretend to want to be in it to be the one at the end when I was there fully vulnerable wanting to find someone,” she wrote.

Angie shared that she told the contestants many times during filming that they could leave if they felt the show wasn't for them.

“Of course they don’t show everything that happens on the show as we know very well. But I know my truth and what I put into this experience and unless you’ve been in it you really would not understand. All I wanted was honesty. Not all of them to like me."

In a second comment, Angie pointed out that she has stayed silent and tried to keep out of all the drama.

"So let the girl say one thing. Everyone else seems to be going in hard out," she wrote.

Bachelor in Paradise continues tonight at 7.30pm on Channel 10.