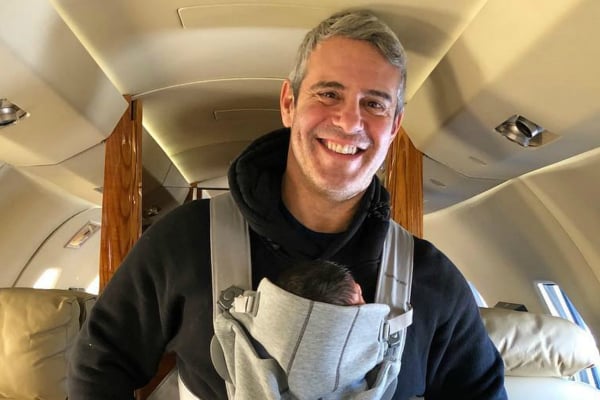 When you finally become a parent, after years of hoping and dreaming, and you share a photo of your baby with the world, what do you want? Gushing.

What do you get? Judgement.

US talk show host Andy Cohen found that out when he posted a photo of himself with his newborn son Benjamin on a private plane. Cohen’s son arrived via surrogate on February 4.

“I’m in love,” he wrote on Instagram, alongside a picture of him holding his baby to his chest. “And speechless. And eternally grateful to an incredible surrogate. And I’m a dad. Wow.”

Over the weekend, he followed that up with the photo taken on the private plane, as he flew his son home from Los Angeles to New York. Benjamin was in a baby carrier. Cohen had a huge smile on his face.

“Digging the #DadGear!!!” he captioned it.

That’s when the dad-shamers came out.

“Google says it’s too early to take baby on plane,” sniffed one. “Wealthy do what they want.”

“Hey, idiot,” posted another. “Head needs to be covered and ears could pop. Better check with a good nanny now.”

The criticisms went on:

“He is supposed to be in a bundle wrapped up, three days old. I thought you were better than that, Andy.”

Okay, okay. As Cohen explained on his talk show Watch What Happens Live in December last year, becoming a dad has taken him “many years of careful deliberation, a fair amount of prayers and the benefit of science”.

“Family means everything to me and having one of my own is something that I have wanted in my heart for my entire life,” he said. “And though it’s taken me longer than most to get there, I cannot wait for what I envision will be the most rewarding chapter yet.”

Does anyone seriously think that, after all that, he would not have checked with his doctor if it was okay to fly with his baby on a private plane?

Plenty of commercial airlines in the US – and Australia – will let a baby travel under the age of seven days if the baby has a doctor’s clearance. Plus, there are advantages to a private plane over a commercial airline, such as the baby not being stuck in a cabin with hundreds of other people and their germs.

So, dad-shamers, back off. Back right off. Look at Cohen’s face. See the joy. At the age of 50, his lifelong dream is coming true. He’s a dad, finally. This baby is wanted and loved (and he’s getting flown around on a private plane).

Have you had any experiences with dad shaming? Tell us in a comment below.