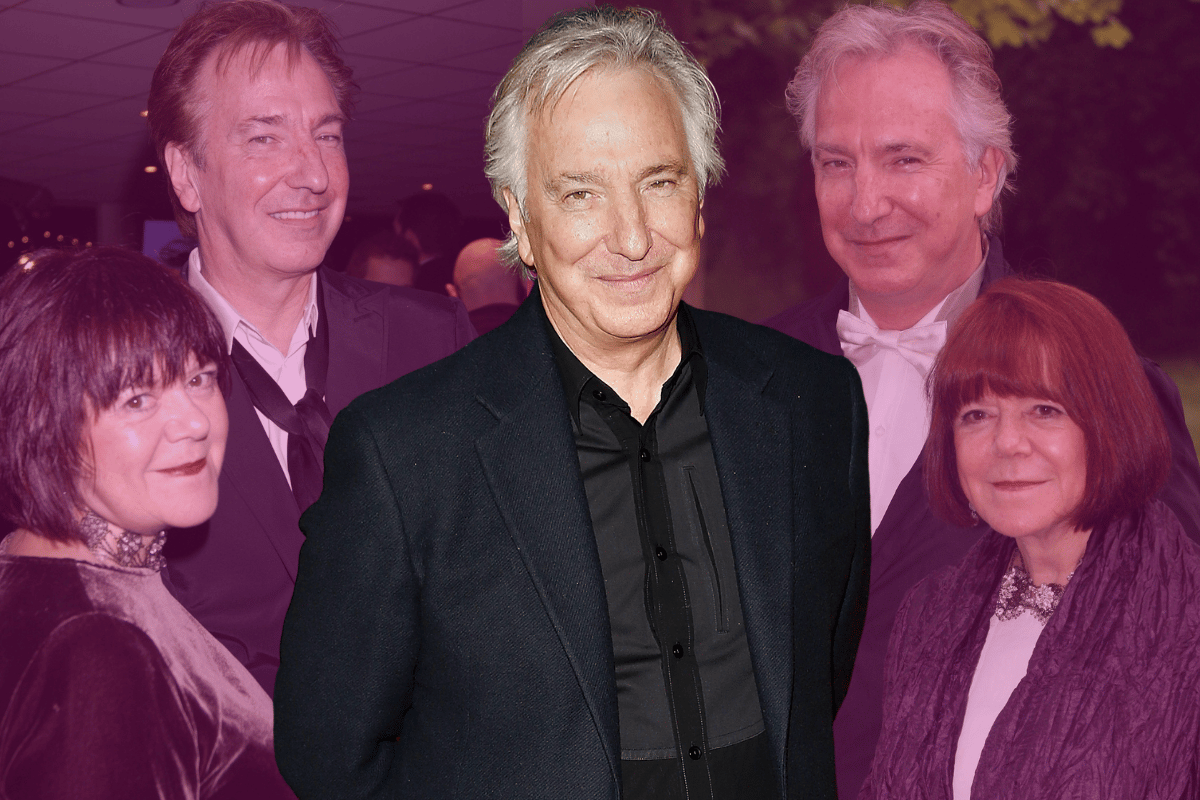 Acclaimed actor Alan Rickman was at the height of his fame in the early 2010s, with a string of films under his belt such as the Harry Potter franchise, starring in Love Actually alongside Emma Thompson, and Die Hard.

In 2012, Rickman married his partner of over 47 years: Rima Horton. The pair had met as teenagers and had been together ever since.

That same year however, Rickman had reportedly received a sobering cancer diagnosis, prompting him and Rima to make their partnership 'official'.

With a powerful on-screen presence, we thought it important to unpack Rickman's personal life, including his upbringing, his late career change and incredible legacy.

Alan Sidney Patrick Rickman was born on February 21, 1946, to parents Bernard and Margaret. Rickman grew up on a council estate in West London, with his three siblings.

His mother was Welsh, and his father was Irish. Bernard, a factory worker, died of lung cancer when Rickman was only eight. Margaret later remarried, only to divorce Rickman's stepfather years later.

Recently, a letter Rickman wrote to his younger self re-emerged, showcasing his pretty amazing wisdom. The letter was originally published in the book Dear Me: A letter to my 16-year-old self.

Alan Rickman's letter of advice to 16-year-old Alan Rickman (from the book, 'Dear Me'). pic.twitter.com/6DNsi6J5Vq

As a child, Rickman won a scholarship to a good school in Hammersmith, London. It was here that he studied vocal delivery and enunciation, as he was actually born with a speech impediment that affected his jaw movement. 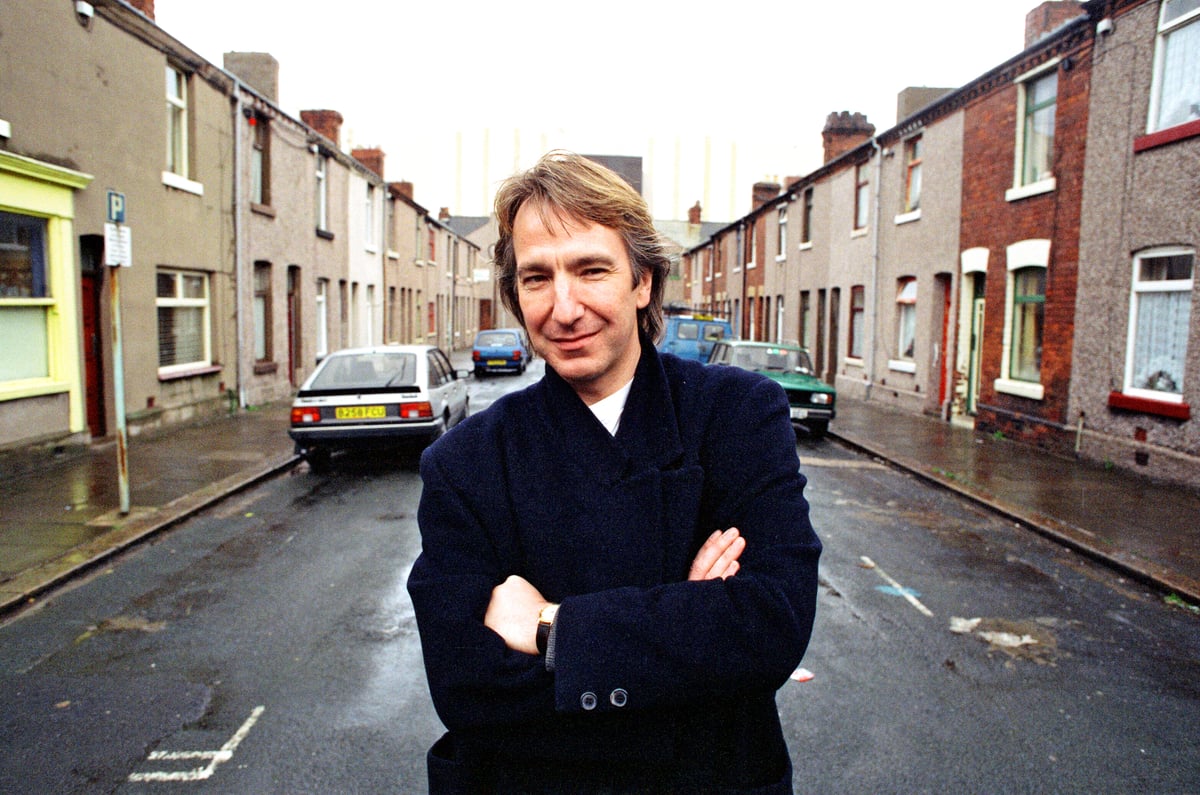 Image: Getty. He performed in plays at school, but decided to study graphic design once he turned 18.

He went on to open a design business, but later decided to audition for a place at Rada where he studied vocational training for actors.

It was from here in the 1970s that Rickman began his acting and theatre career.

Rickman spoke about the craft of acting in an interview with Hello! Magazine, saying: "I take my work seriously. And the best way to do that is not to take yourself too seriously."

Rickman spent over a decade doing various roles in theatre and Shakespeare productions, before landing his first movie role at the age of 46: in the one and only Die Hard. 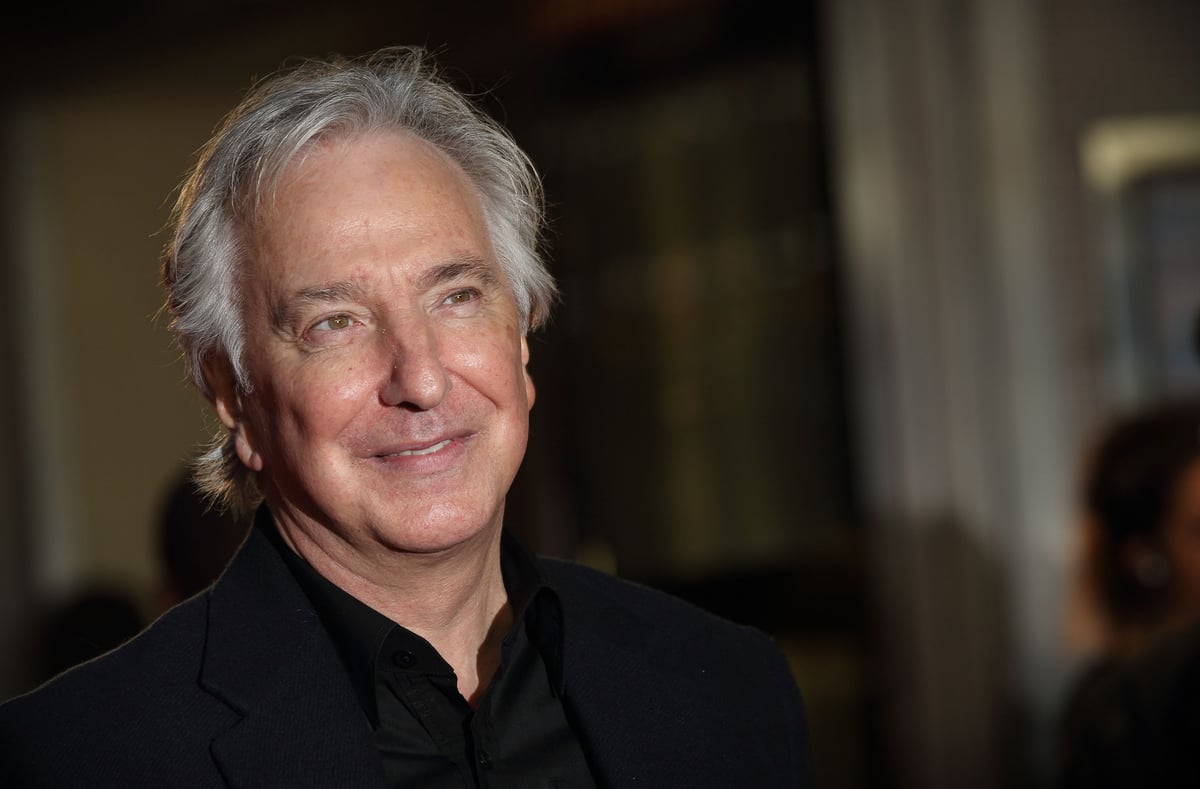 In 1991 came Robin Hood: Prince of Thieves, where Rickman was once again the main antagonist, a role which won him a Bafta.

Then came some good 'ol Jane Austen in the classic Sense and Sensibility, Rickman starring alongside Emma Thompson, Kate Winslet and Hugh Grant - all of whom would become great friends.

But there are two roles in particular that captured the world's attention: Rickman's work in the Harry Potter franchise and cult Christmas film Love Actually.

Listen to Cancelled: Love “you don’t even speak the same language” Actually. Post continues after audio.

In Love Actually, he played the cheating husband of Thompson caught in a love affair with his secretary.

When it comes to Harry Potter, the intimidating enigma of Severus Snape was the perfect role for Rickman.

It was later revealed by J. K. Rowling that she actually shared with Rickman the future for his character, Snape, and his true allegiance long before it was revealed to the world.

His performance throughout the franchise is made even more sentimental considering the film's upcoming 20th anniversary and reunion special. 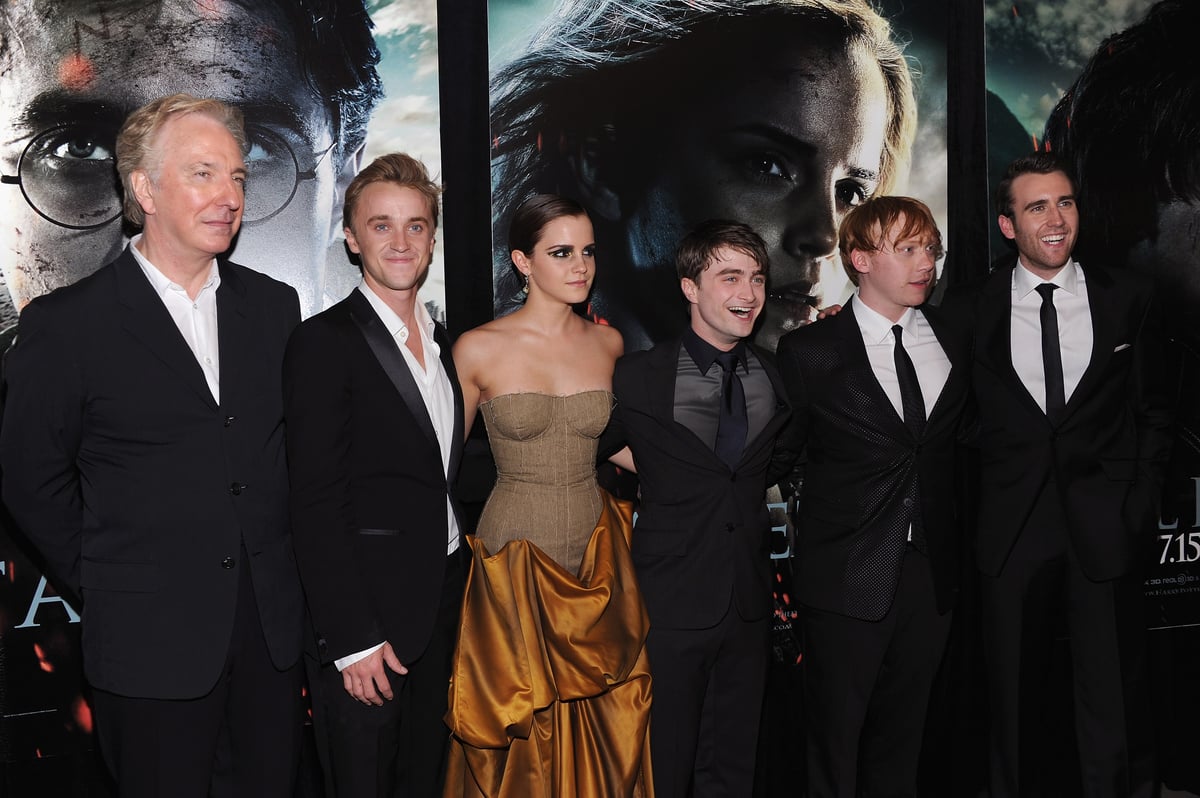 It was while Rickman was a teen at the Chelsea School of Art, that he met a fellow student called Rima Horton.

And ever since 1965, the pair were each other's number one.

Rima was a university economics lecturer and a Labour Party Councillor from 1986 to 2006.

Rickman said to Hello! Magazine of his relationship: "I think every relationship should be allowed to have its own rules. She's tolerant. She's incredibly tolerant. Unbelievably tolerant. Possibly a candidate for sainthood." 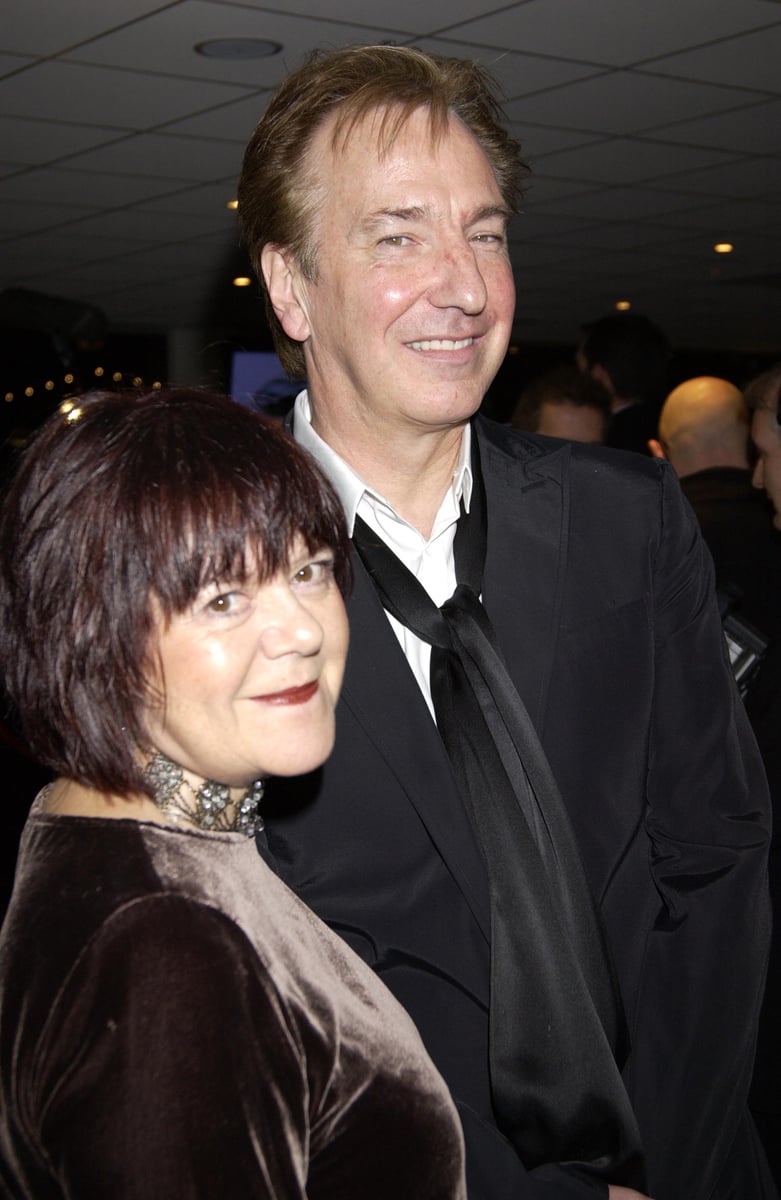 In a separate interview, Rickman also said: "We're just as messy and complex as any other couple, and we go through just as many changes. But I really respect her. Rima and I can sit in a room just reading, and not saying anything to each other for an hour, then she'll read something to me and we'll both start giggling."

The couple never had any children, Rickman once saying about the decision: "You should remember I am not the only one involved. There is another person here. I would have loved a family."

He continued: "Sometimes I think that in an ideal world, three children, aged 12, 10 and eight, would be dropped on us and we would be great parents for that family."

In 2012, the pair decided to marry secretly in a private ceremony.

It wasn't until 2015, that Rickman revealed he was married, telling German newspaper Bild, "We are married, just recently. It was great because no one was there. After the wedding in New York, we walked across the Brooklyn Bridge and ate lunch."

He also laughed that he bought Rima a $200 gold band ring "that she never wears". 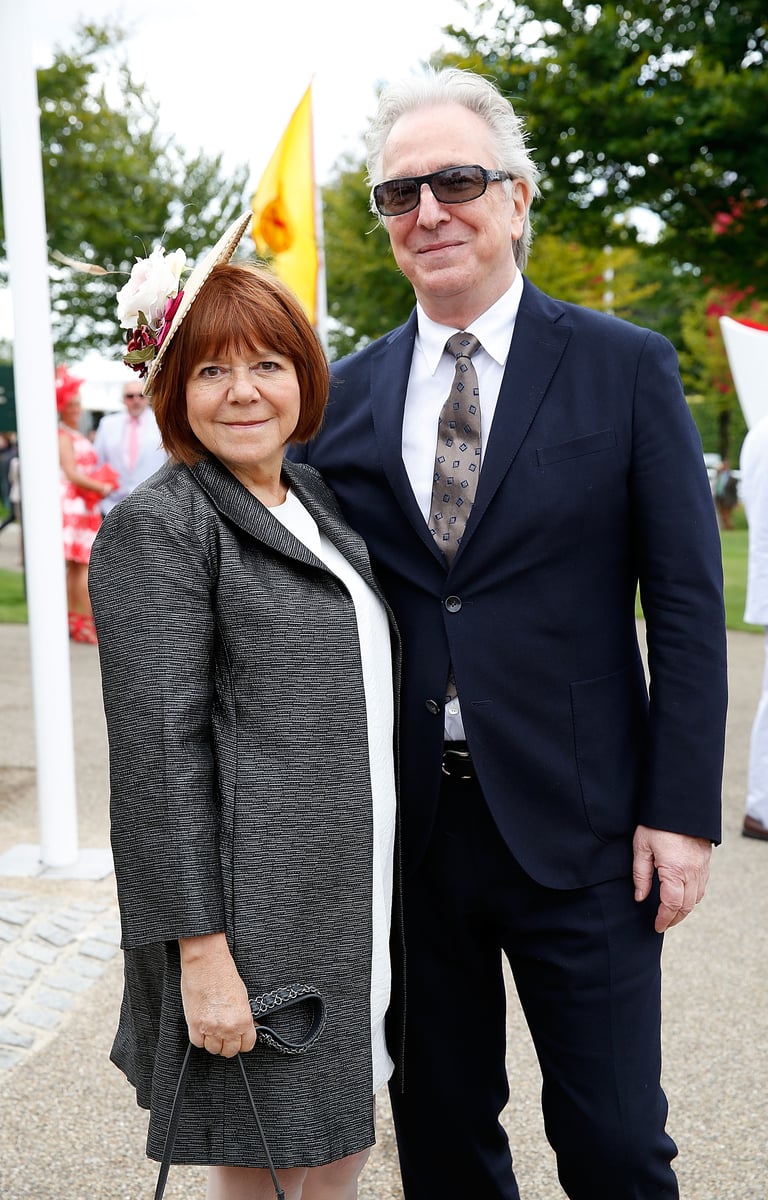 It has been thoroughly reported that the couple decided to wed after Rickman received the news he had been diagnosed with pancreatic cancer.

According to Looper.com, Rickman chose to keep his cancer diagnosis a secret from the world, sharing the news with only his closest friends and family, and going about his work as usual.

While Alice Through the Looking Glass is officially Rickman’s last role, he had planned on starring in The Limehouse Golem, but in the end, he was replaced by Bill Nighy due to Rickman's illness

Bill Nighy later said after Rickman's passing: "At the time we didn't really know how ill he was. Obviously, it was a great loss to everybody."

A statement from Rima and his family said, "The actor and director Alan Rickman has died from cancer at the age of 69. He was surrounded by family and friends." 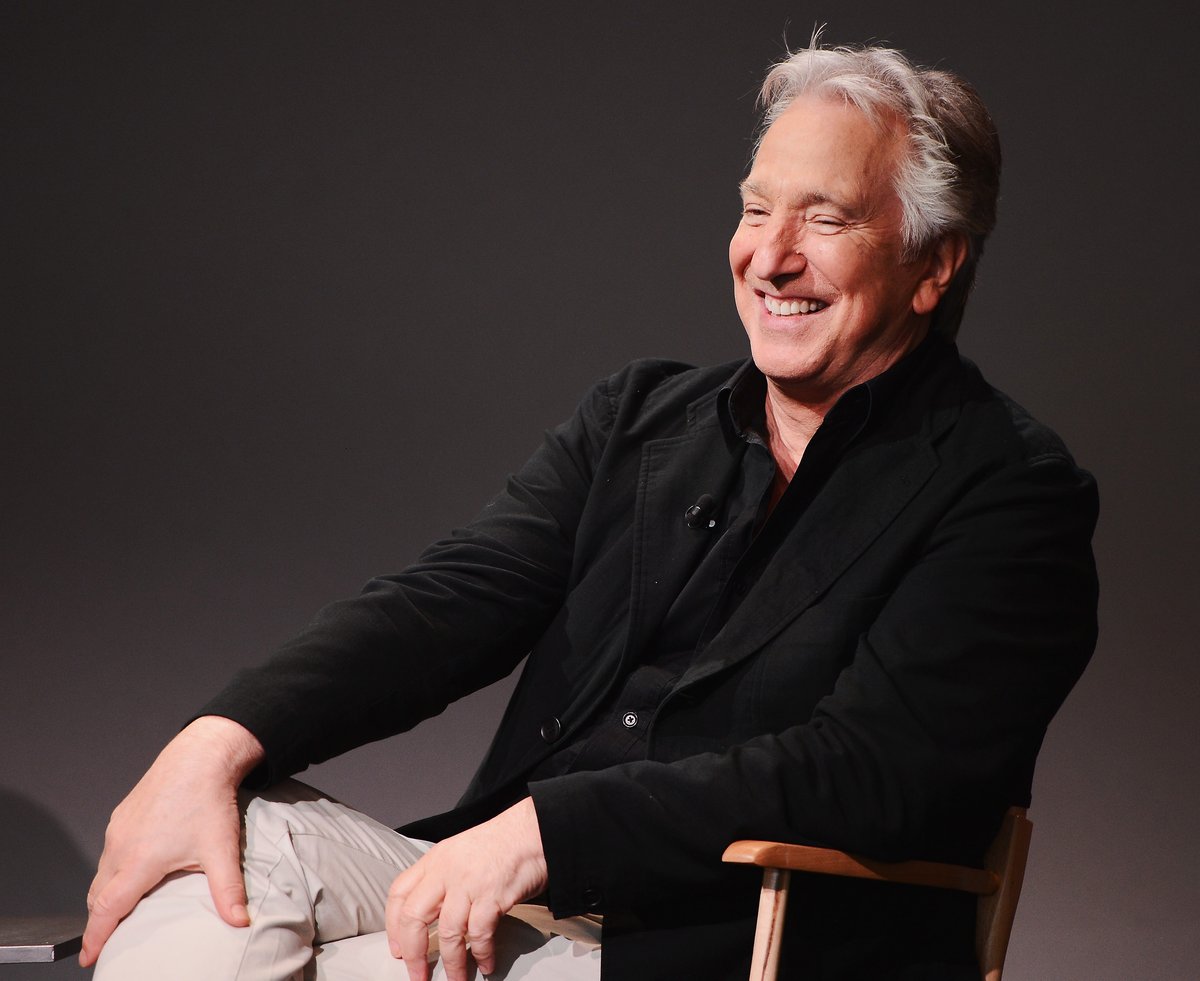 Image: Getty. Emma Thompson, 62, who worked with Rickman many times, released a loving tribute to her friend and frequent co-star, calling him a "rare and unique human being".

"Alan was my friend and so this is hard to write because I have just kissed him goodbye," Thompson’s statement began.

"He was the ultimate ally. I trusted him absolutely. He was, above all things, a rare and unique human being and we shall not see his like again."

Emma Thompson won't be appearing in the #LoveActually short because it would be "too sad" without Alan Rickman https://t.co/DRClWMyqWl pic.twitter.com/osHpQuECdH

Another fellow co-star, Kate Winslet, shared her devastation at the time, writing: "He was loved enormously by so many. He was an exceptionally warm and giving man and an utterly phenomenal actor and gifted director."

She continued: "I remember being so intimidated by him when we worked together when I was 19, because he had such a powerful and commanding presence. But the reality of course, was that he was the kindest and best of men. My life was enriched by knowing him."

There was also an outpouring of grief from the Harry Potter community, including his fellow actors.

Daniel Radcliffe said, "He is one of the most supportive people I’ve ever met in the film industry. He was so encouraging of me both onset and in the years post-Potter. I'm pretty sure he came and saw everything I ever did on stage both in London and New York. He didn't have to do that. I will carry the lessons he taught me for the rest of my life and career."

Matthew Lewis, who played Neville Longbottom, said: "I recalled the trailer in which Alan offered me some of the greatest advice I ever received about this mad profession we shared. I will treasure those memories. He inspired my career more than he ever knew and I'll miss him."

Alan Rickman. Incredible actor and director. Above all, the most generous, funny, loving friend to us. @Deborra_lee and I will miss you so .

There are no words to express how shocked and devastated I am to hear of Alan Rickman's death. He was a magnificent actor & a wonderful man.

What's evident is the outpouring of grief that occurred in the wake of Rickman's death, especially given the additional icons we lost in 2016 such as David Bowie and George Michael.

Just recently it was announced the diaries of Rickman are to be published, with 27 handwritten volumes to be edited down into a single book.

"I'm delighted that Canongate will be publishing Alan’s diaries," Rima said to The Guardian.

"The diaries reveal not just Alan Rickman the actor, but the real Alan: his sense of humour, his sharp observation, his craftsmanship and his devotion to the arts." 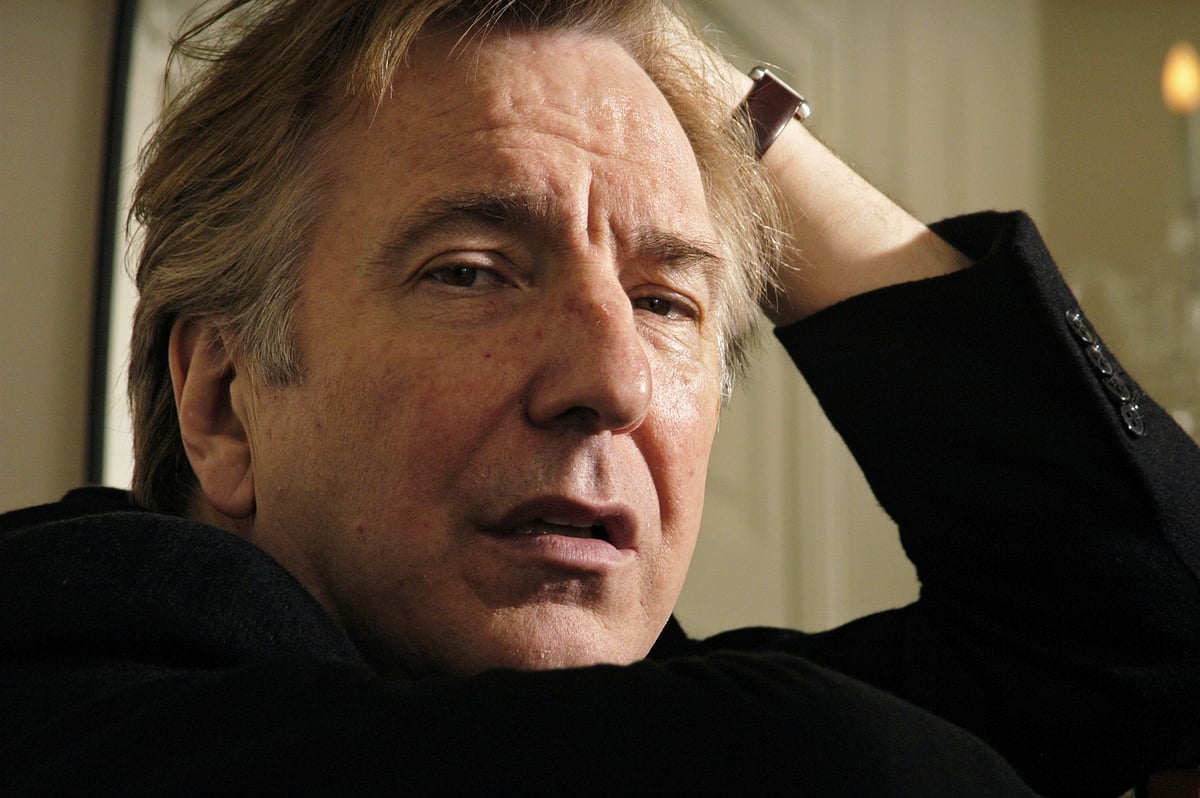 Image: Getty. What is your favourite Alan Rickman film? Let us know in the comments!

S
skeetsie40 a month ago