In February 2020, Ahmaud Arbery was shot and killed in broad daylight while out for a run in a South Georgian town in the US.

Now, over a year later, three men have been convicted of his murder, after shooting and chasing the 25-year-old through their neighbourhood.

Gregory McMichael, 65, his son Travis McMichael, 35, and their neighbour William "Roddie" Bryan, 52, have been sentenced to life in prison for the murder, aggravated assault, false imprisonment and criminal intent to commit a felony.

What happened to Ahmaud Arbery.

In May 2020, months after the murder, a graphic video of the incident, filmed by an anonymous source, was posted on Twitter and then deleted, but not before it quickly went viral.

In the video, a Black unarmed man in exercise clothes can be seen running along a street in Brunswick, Georgia, at 1pm, before a white pickup truck blocks his path. One white man is standing next to the driver’s door while another is perched in the vehicle’s flatbed.

The view is obstructed for a few minutes, and some shouting can be heard. The video then shows the Black man trying to run around the truck before a gunshot rings out. He and the white man on the road engage in a struggle before another shot is fired. A third gunshot hits him, and he falls to the ground.

25-year-old Ahmaud died at the scene.

For two months, neither of his pursuers, a father and son named Gregory and Travis McMichael, were arrested or charged, even though Gregory admitted to police that Travis was responsible for the shooting. 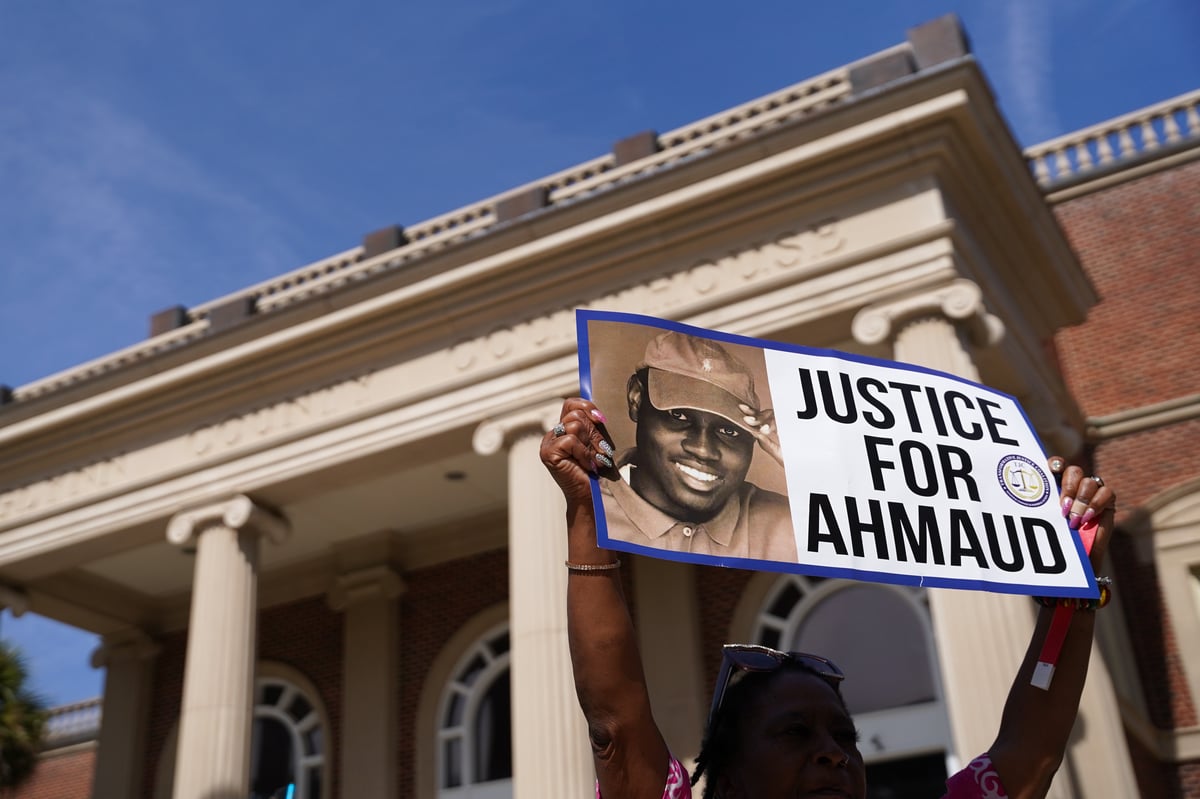 Image: Getty. They told police that Ahmaud resembled a suspect that had committed burglary in the area, with a police report obtained by the New York Times quoting that Gregory "was in his front yard when he saw Arbery hauling ass down the street, and called to Travis, 'The guy is running down the street, let’s go'."

The McMichaels got in their pickup truck, armed with a 357 magnum and a shotgun, and began chasing Ahmaud through the neighbourhood.

A jury found the three white men accused of killing Arbery guilty on most of the 29 charges they faced the day before Thanksgiving. https://t.co/XvIasZHYMR

They told police they called out to him and said "stop stop we want to talk to you," and when Travis exited the vehicle to approach, Ahmaud "attacked" him.

During a struggle over the gun, the report states, Travis fired two shots.

Police ultimately decided not to press charges because "the men who shot Arbery were compliant with Georgia’s open carry law, as well as laws regarding both citizen’s arrests and stand-your-ground," reports The Cut. 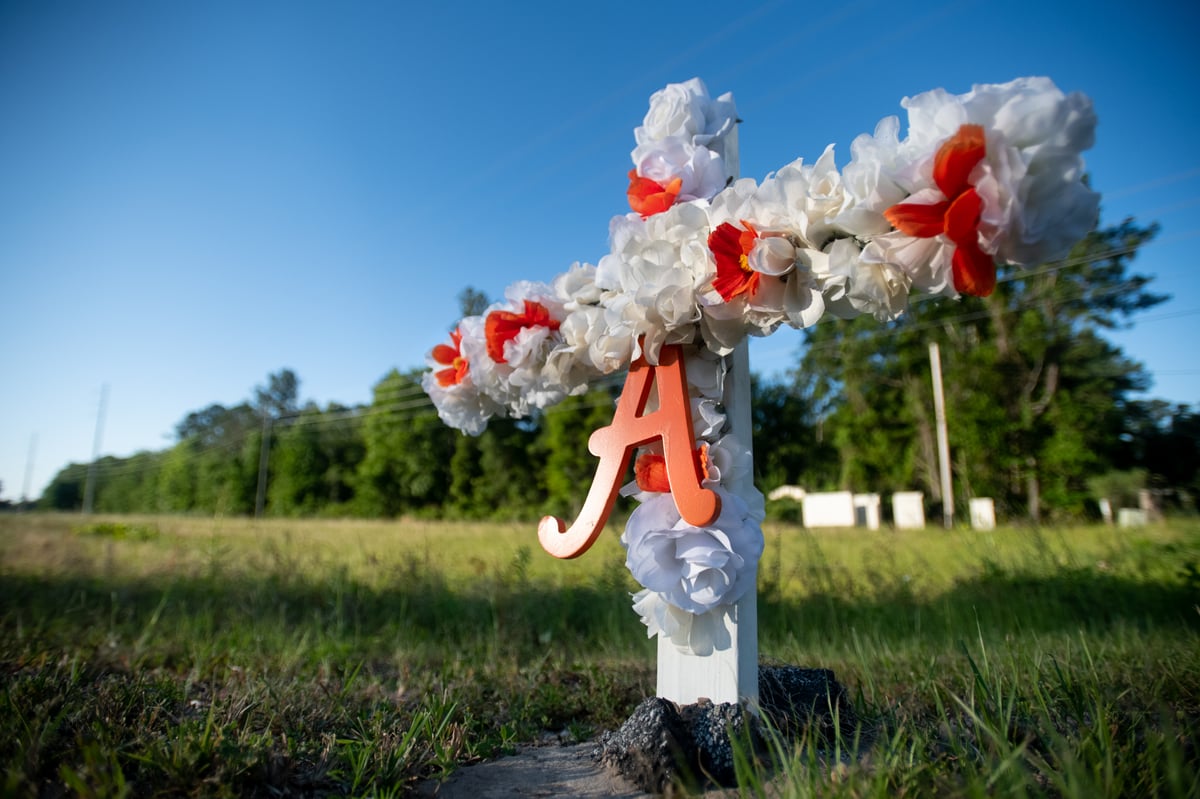 Image: Getty. But as the attorney representing Ahmaud's family points out in a statement:

"Mr Arbery had not committed any crime and there was no reason for these men to believe they had the right to stop him with weapons or to use deadly force in furtherance of their unlawful attempted stop. This is murder."

The mother of #AhmaudArbery had to wait 74 days before her son's murderers were arrested, after prosecutors allegedly shielded them from charges.pic.twitter.com/k2PbiCoZVZ

"He was out for his daily jog and he was hunted down like an animal and killed," his mother added, while being interviewed by CBS.

In May, Gregory and Travis McMichael, and their neighbour William "Roddie" Bryan, were eventually arrested. Bryan had joined the McMichaels in their pursuit and recorded Ahmaud's final moments.

The court case hinged on whether the three men, under a now-repealed Georgia law permitting citizen arrests, had a right to confront Arbery on a hunch he was fleeing a crime.

The reactions to the guilty verdict. 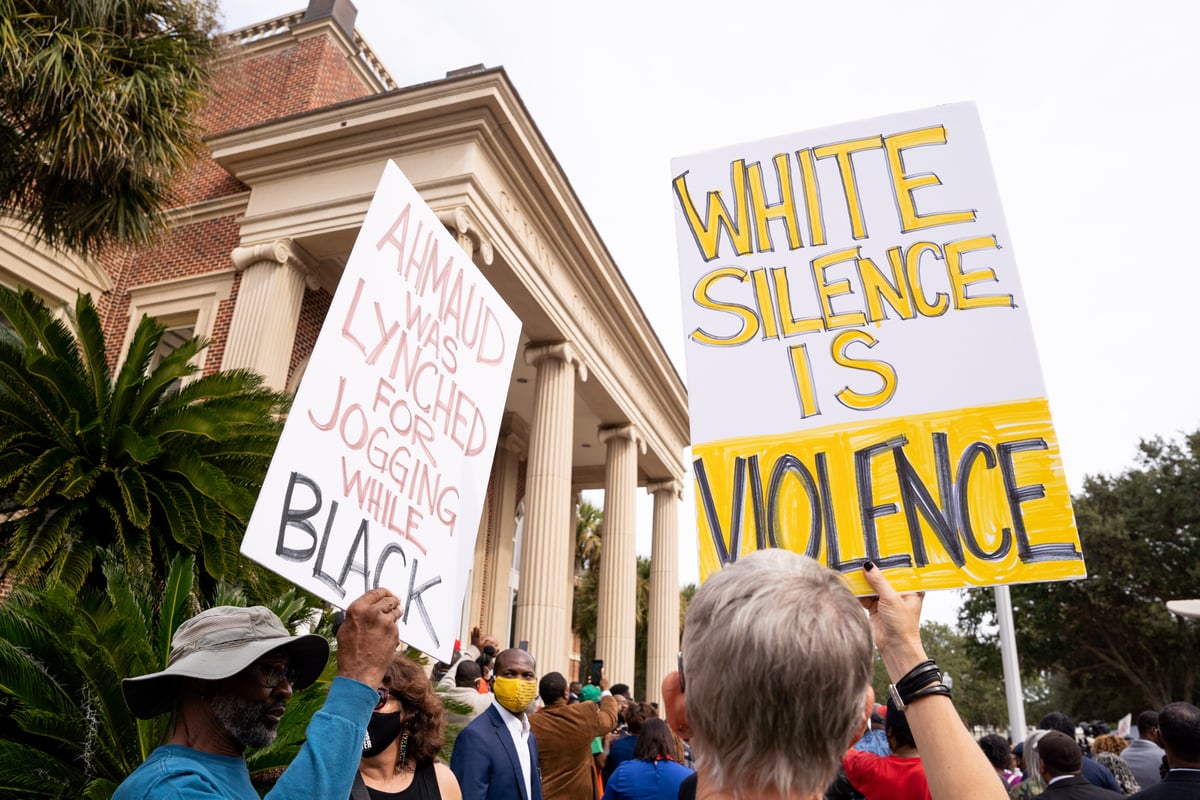 US President Joe Biden said that while the verdict reflects that the US justice system is "doing its job", no one should fear violence "because of the colour of their skin".

"Nothing can bring Mr Arbery back to his family and to his community, but the verdict ensures that those who committed this horrible crime will be punished. While the guilty verdicts reflect our justice system doing its job, that alone is not enough," he said in a statement.

"Instead, we must recommit ourselves to building a future of unity and shared strength, where no one fears violence because of the colour of their skin."

US Senator Raphael Warnock and Bernice King, the daughter of Martin Luther King Jr, are among many who also reacted to the news on social media.

I'm grateful to the jury for their service and for a verdict that says Ahmaud Arbery’s life mattered. He was a son, a nephew, a child of God, and he did not deserve to die in this way.

I'm praying for Ahmaud’s family as they begin the difficult journey towards healing.

#AhmaudArbery should be here.

The McMichaels and Bryan are indeed guilty of taking his life for no other reason than for him being Black.

I’m praying for and thinking of Ahmaud’s family, including his mother, Wanda Cooper-Jones, who in this moment, is still missing her son. pic.twitter.com/JNKCzfSXP8

The trio are sentenced to life in prison for the murder.

This week, a Georgia judge sentenced McMichael junior, McMichael senior and Bryan to life in prison for what he called the "chilling" 2020 murder of Ahmaud Arbery.

The McMichaels will now spend the rest of their lives in prison but the judge ruled that Bryan could seek parole after 30 years in prison, the minimum sentence allowed for murder under state law.

The judge said he gave the McMichaels the harshest sentence open to him in part because of their "callous" words and actions captured on video.

"It was a chilling, truly disturbing scene. Arbery was hunted down and shot and he was killed because individuals here in this courtroom took the law into their own hands."

The judge continued: "When I thought about this, I thought from a lot of different angles. I kept coming back to the terror that must have been in the mind of the young man running through Satilla Shores."

Defence lawyers have said they will appeal the convictions. 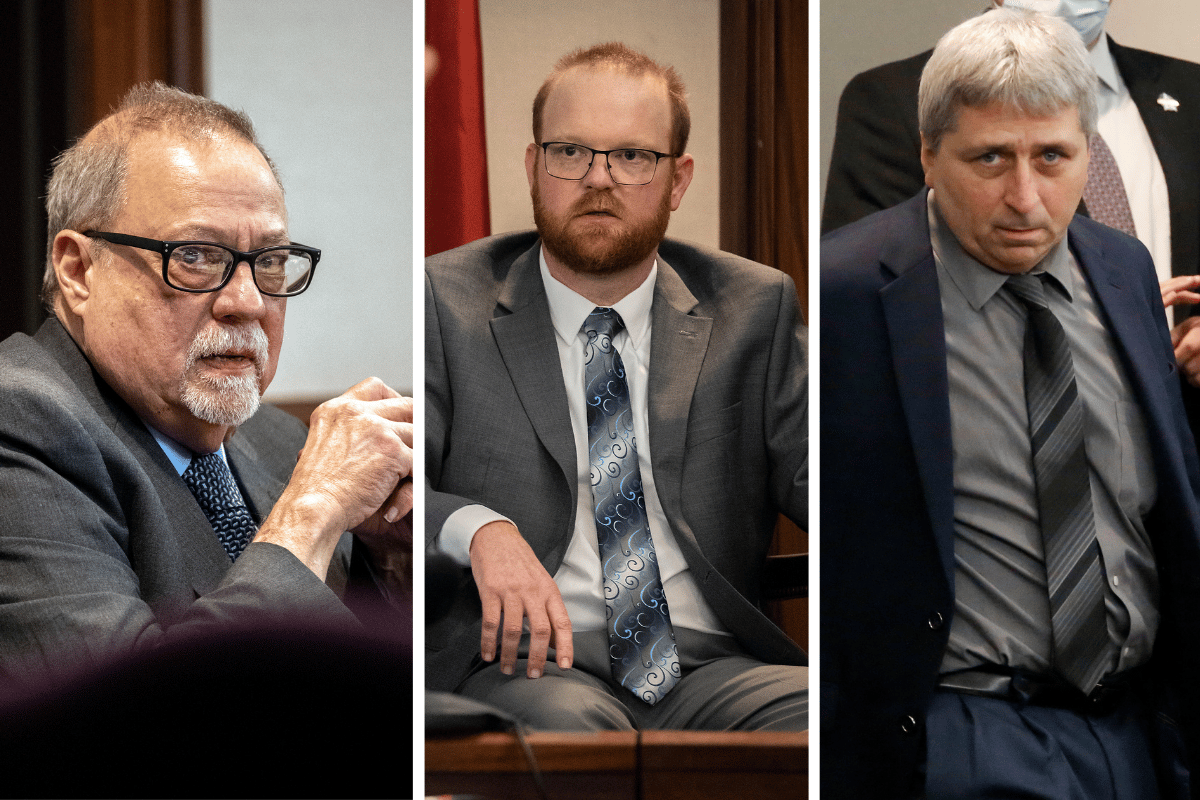 "They chose to target my son because they didn't want him in their community," Wanda Cooper-Jones, Arbery's mother, told the court on Friday.

"When they couldn't sufficiently scare him or intimidate him, they killed him."

Marcus Arbery Sr, Ahmaud’s father, also addressed the court. "When I close my eyes, I see his execution in my mind, over and over. I will see that for the rest of my life. Not only did they lynch my son in broad daylight, they killed him while he was doing what he loved more than anything: running. That's when he felt most alive, most free, and they took all that from him."

This week, leading civil rights attorney Ben Crump said on Twitter: "These brutal crimes nearly went unpunished because of the deep corruption that pervades so many of our systems.

"The tragic murder of Ahmaud Arbery must not be in vain. America, we are showing progress. Now is not the time to retreat. We must continue to demand better from law enforcement, from our justice system and from our society as a whole." 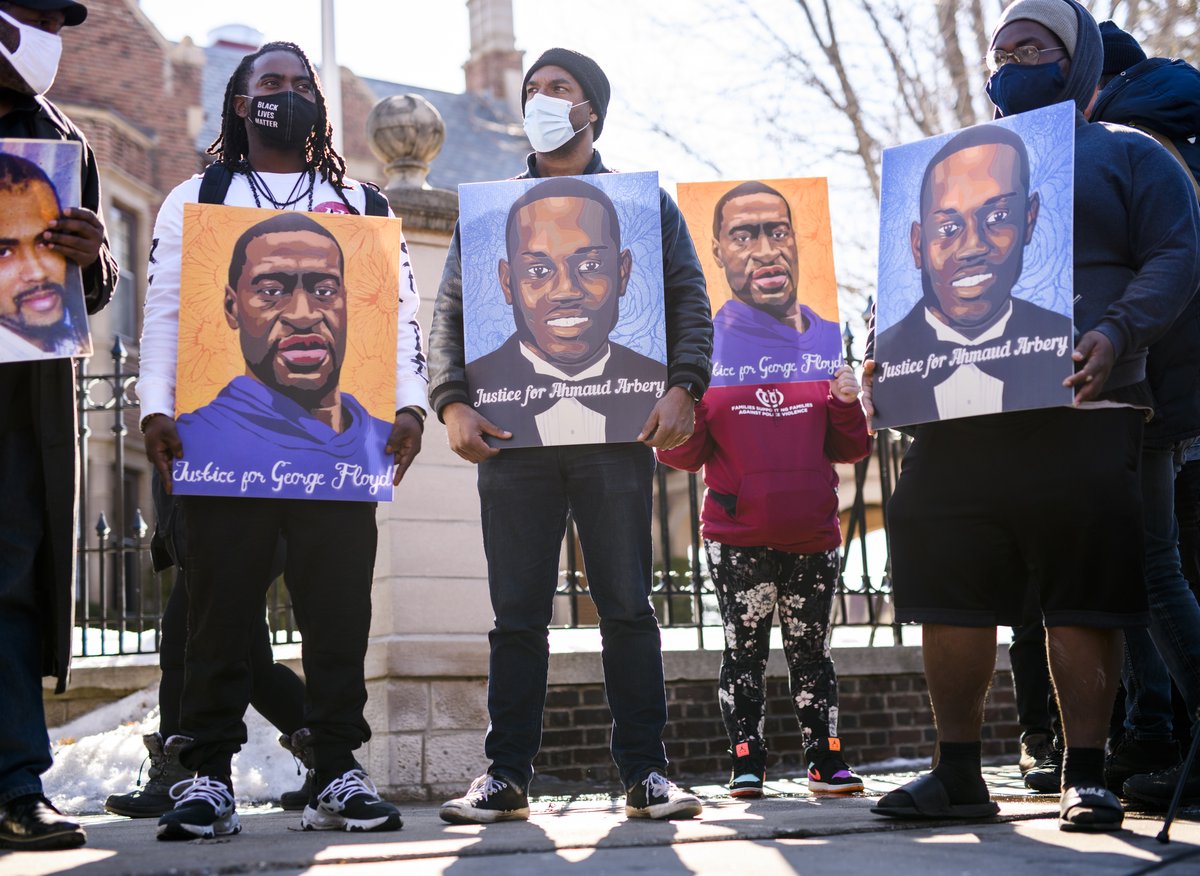 Reply
Upvote
6 upvotes
I'm glad we got the correct result, now lets get to work on the police and DA who tried to suppress it originally.
L
laura__palmer 2 months ago

Reply
Upvote
1 upvotes
@snorks I think you will notice that the man who filmed the murder was charged and convicted along with the father and son. So the information I provided was, in fact, correct.
S
snorks 2 months ago