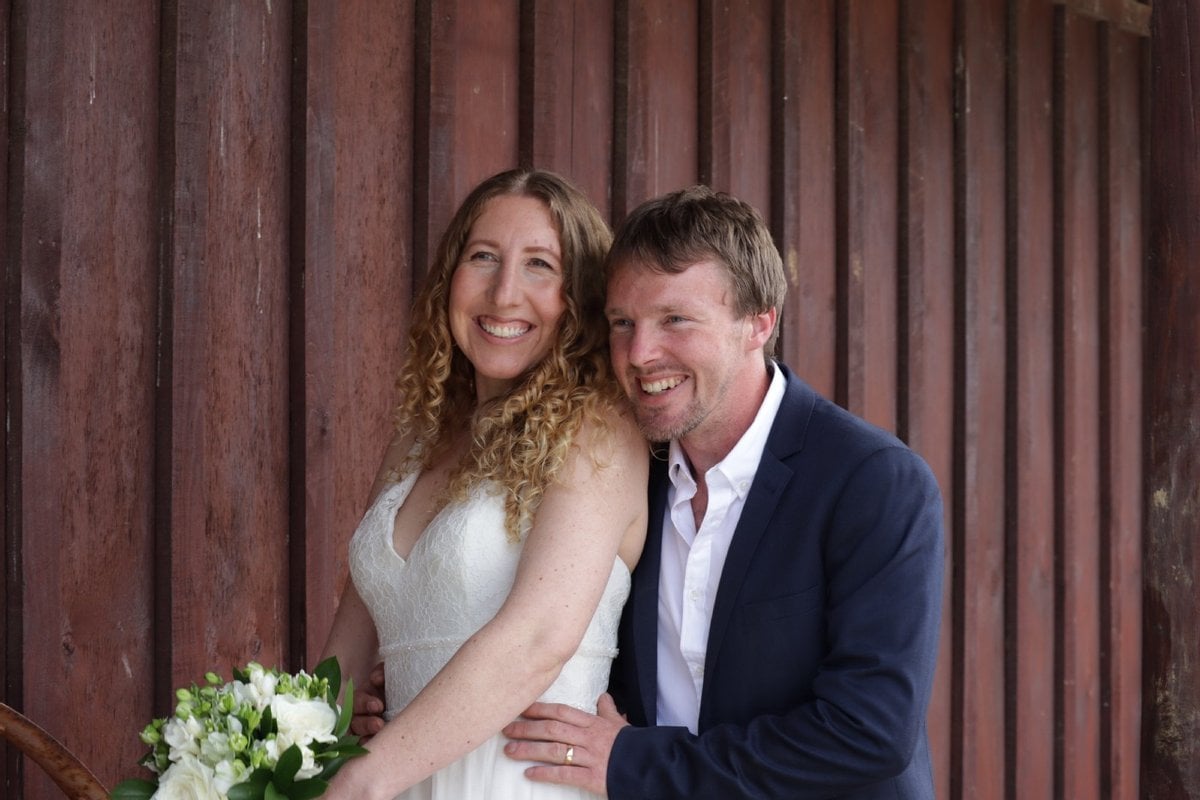 I could feel my body shouting, “Here comes mid-life!” and that wasn’t something I wanted to face yet, especially since my husband is still in his early 30s. But, I found myself standing in front of an airport bookstore display. It was filled top to bottom with: Don’t Sweat It by Nicky Pellegrino. A menopause book. I wrestled over whether to buy it. Picked it up. Put it back down again.

I knew once I’d read it, I couldn’t unread it. I would know what I was heading into. I’d know all the horrors of menopause and ageing as a woman, and I’d have to face them. I wouldn’t be able to pretend I was ageing-backwards anymore, like I’d been joking about with my much younger husband.

Watch: Do we need a new word for middle-aged? Post continues after video.

Video via Mamamia Out Loud.

Our age gap love has never been an issue. At 31 his beard is turning white in patches, while at 43 I still haven’t found a single grey hair on my head. But ageing with a husband who is 12 years younger feels a little scary. We’ve only been married a year and when we started dating three years ago, I convinced myself the age difference wouldn’t matter. And it doesn’t. It hasn’t.

Menopause is the start of losing my youth, losing my waistline, losing control. It’s not sexy - that was my view on it and the one society often tells us. I wanted to pretend it wasn’t happening; that menopause is years away and that, somehow, having a younger husband delays it.

“You’re only as old as the man you feel,” I laugh and tell people when they ask about our age gap, which isn’t very often. We look similar in age. Or at least we do for now. But will that always be the case?

I remember seeing a wedding photo of my aunty and uncle when I was a kid and thinking how much she’d aged compared to him. (And she was younger than him.) Will people think the same thing about me in a couple of years?

I stood in the airport, holding the pink menopause book and found myself heading for the counter.

“I bought this,” I told my husband, showing him the cover.

“Cool!” he said. “I’m going to go get a coffee. Can you watch the bags?” He doesn’t seem bothered by the idea of me ageing at all. I can’t help feeling bothered by it. I have no idea what to expect. The only symptom I’ve experienced so far is a lack of periods. Is that going to be it for me?

I’d heard that your experience of menopause is often similar to your mother’s, but my mum had already had a hysterectomy by my age. She’d been placed on the old form of Hormone Replacement Therapy (HRT) and then slipped quietly into post-menopause.

“I didn’t even notice,” she said. Would that be my experience too?

I opened the book and couldn’t put it down. I read it in three days, and the more I read, the more excited I got. I looked up every site the book recommended. I joined three perimenopause and menopause Facebook groups. I watched TED Talks. I was hooked.

Listen to The Quicky's episode on menopause. Post continues after podcast.

I talked with dozens of women and devoured their stories, the good ones and the awful ones. I wanted to hear about every symptom, every stage, every treatment. I learned about the new Menopausal Hormone Therapy (MHT) and looked up specialists to read their recommendations. I found podcasts and blogs and more books.

It felt like being let in on a secret - one I no longer found scary, but empowering. I brought up menopause with every single person I met: the hairdresser, friends at a barbecue, my sisters, my chiropractor, my doctor. Did other people know what I knew? I had to find out.

My husband listened attentively to way more than he probably cared to hear.

I wanted to make sure everyone had heard about perimenopause because to me, and many of the women I interviewed, it had been such a mystery.

The chiropractor and the doctor had only briefly heard about it in their training.

“I’ve always felt like I was missing something with my women patients. Like I was treating disconnected symptoms I knew were somehow connected,” the chiropractor said.

The doctor, a young man who was trained within the last decade, said they’re taught almost nothing about menopause at medical school, unless they’re specifically interested in the topic. Nothing at all about perimenopause.

“It’s strange how little we’re told, considering it’s not rare,” he said. “Half the population will go through it.”

I told my husband what he’d said.

“Well, it’s not a very sexy topic,” he replied.

I stared at him. Seriously? Don’t judge him too harshly here. I didn’t. My husband is usually a smart man and this topic is new for him too. I decided to hold my tongue.

“Bowel cancer isn’t sexy and they learn about that.”

After talking to women in their 30s to 60s, I’m starting to think we’re all wrong about menopause and ageing as women.

Yes, the hot flushes, chin-hair growth, mood swings, and dozens of other symptoms aren’t at all fun from what I’ve been told.

But once that’s over, older women I spoke to said postmenopausal life is great.

Many of them said they have new energy, a revived libido, and calm, focused minds. Women in retirement (if they retire, which I don’t plan to) tend to spend more time than men exercising, being involved and active in the community, and getting into their hobbies.

They no longer feel the need to impress or people please. They’ve relaxed into their authentic selves and can be who they really are.

Now, that sounds pretty damn sexy to me.

Ageing is very much a mentality. We can’t avoid it, but I don’t think I need to panic either. Good relationships are about more than how we look on the outside.

Anyway, I may look older than my husband eventually, but no one says I have to act my age...

Have you ever been through perimenopause? We’re here to help! The Very Peri Summit, presented by Mamamia is coming soon! Get your early bird tickets now so you don’t miss out!

R
rosiecat a month ago

Reply
Upvote
I think it’s sad the author is so worried about an age gap in her relationship and actually (the horror!) looking her age. Hopefully she can learn to be more accepting of herself and her intrinsic value.
R
rbk a month ago