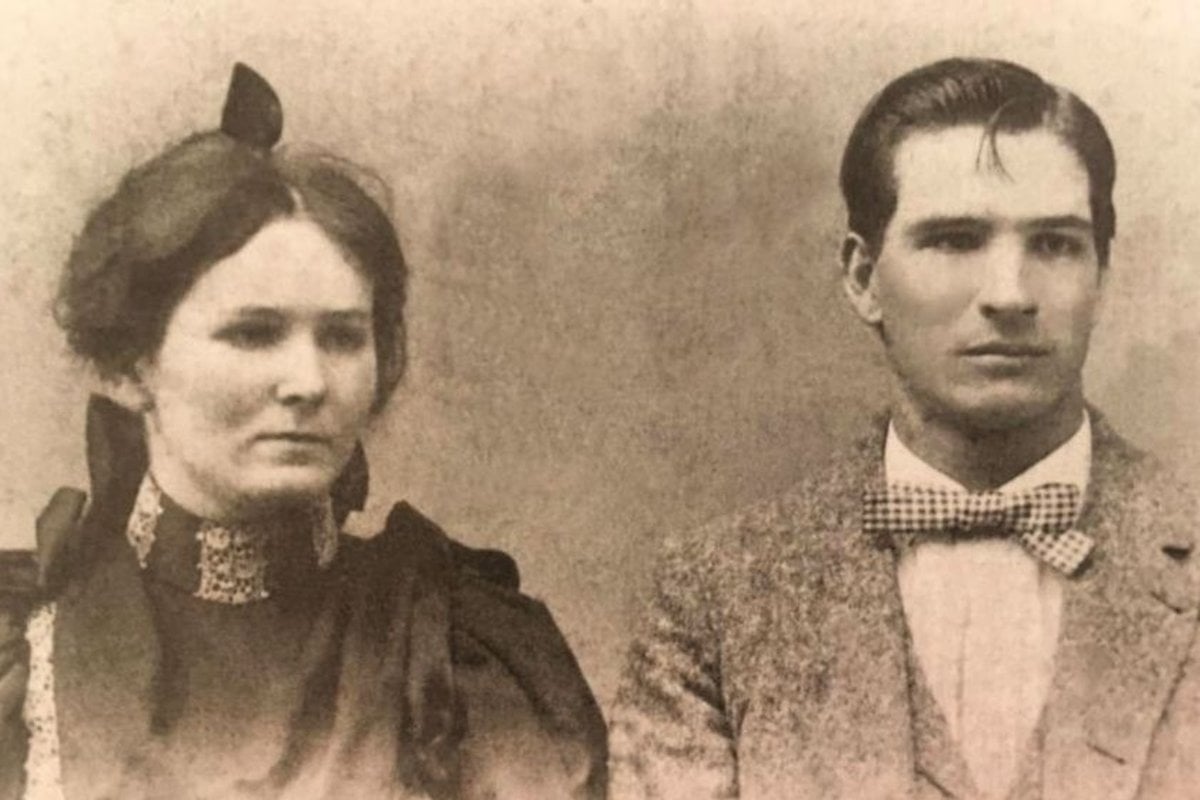 Erasmus, who everyone called Trout, had just moved to the tiny village of Livesay's Mill in Greenbrier County in West Virginia and was working at a local blacksmith shop.

Zona, the daughter of a local farmer, was immediately smitten with this tall, fit, mysterious stranger.

They married just a few months after their first meeting. By all accounts, they seemed to have a happy union.

That is, until Zona was found dead on their kitchen floor.

WATCH: Psychic Debbie Malone on how to tell if there are spirits around you. Post continues below.

On the morning of January 23, 1897, Trout went to his neighbour's house. He asked his black neighbour Martha Jones, who everyone in the village called Aunt Martha, whether her 11-year-old son Anderson could go to his house to do some chores and check on Zona who he said was feeling unwell.

According to the Washington Post, when Anderson arrived at the property, he found Zona's lifeless body sprawled across the kitchen floor.

Despite his young age, Anderson knew the danger of being black in the United States at the time and he was concerned the crime would be pinned on him. So he ran home and told Aunt Martha what he saw.

By the time the local doctor, Dr JM Knapp, arrived at the house, Trout had already prepared Zona's body for her funeral. This was considered unusual, as it was a Victorian custom for a female family member or friend to prepare the body.

While Dr Knapp tried to examine Zona's body to determine the cause of her untimely death, Trout wept and wailed and clung to his wife's limp body.

In the end, Dr Knapp gave up and just listed the cause of death as "everlasting faint", which is what the Victorians called a common heart attack.

A few days later, Zona's wake was held at her mother's house. Though his wife was laid out in an open casket, Trout wouldn't let anyone near her head. He fussed around the casket the entire time, adding a scarf to her neck and a veil to her head. Then he propped her head up with pillows.

He paced back and forth in front of the coffin, making sure no one got a clear view of the body until Zona was buried in the Soule Chapel Methodist Cemetery.

While Trout's behaviour seemed odd at the time, most of Zona's friends and family put it down to grief. After all, the couple had only been married for a few months and Zona was only 23 at the time of her death.

Zona's mother, however, thought there was more to the story.

Mary Jane Heaster had never warmed to her son-in-law. She didn't like him and felt like there was something off about him.

After Zona's death, she prayed for her daughter to come to her and tell her side of the story.

And, according to Mary Jane, Zona did just that.

She appeared to her mother one night and told her about the night she died - the night before young Anderson Jones found her on the kitchen floor.

Zona said on that night she had prepared a meal without any meat and that had thrown Trout into a rage. He placed a hand on either side of her neck and, with a quick motion, snapped it.

She told her mother that this wasn't the first time her new husband had been violent towards her.

According to Mary Jane, Zona appeared to her four nights in a row to recount the same story. The last time, she turned her head 180 degrees to drive her message home.

Mary Jane told her story to Prosecuting Attorney John Preston. Preston dismissed the ghost story as a tall tale told by a grieving mother, but was intrigued by the fact that Dr Knapp didn't perform a proper autopsy. He ordered Zona's body to be exhumed.

Dr Knapp, along with two other physicians, once again examined Zona's body while Trout was present. Trout reportedly became increasingly agitated as they moved towards her neck.

They found Zona had finger-shaped bruises on her neck, and her neck had been snapped.

Trout was arrested and charged with his wife's murder.

During the trial, the jury learnt Zona was actually his third wife. His first wife had left because he was physically abusive, and his second wife had died in mysterious circumstances.

The defence called Mary Jane as a witness in an attempt to discredit the prosecutor's case. But Mary stood firm and recounting her story about Zona's late night visits, as reported by the West Virginia Explorer.

After just one hour and 10 minutes of deliberations, the jury came back with their verdict. They found Trout guilty, and he was sentenced to life in prison.

On March 13, 1900, Trout died in prison. He was 39 years old. After his conviction, Zona's ghost never appeared to Mary Jane or anyone else in Greenbrier County again.

But the legend of Zona Shue and the Greenbrier Ghost who solved her own murder continues to be one of West Virginia's most haunting and beloved stories.

Read more of our Extraordinary Stories:

The true story of 'The Silent Twins', who decided one had to die so the other could be free.

For years, Emilie Sagee was haunted by a ghost who looked exactly like her.

The enduring mystery of Pauline Picard, the girl who went missing once and was found twice.