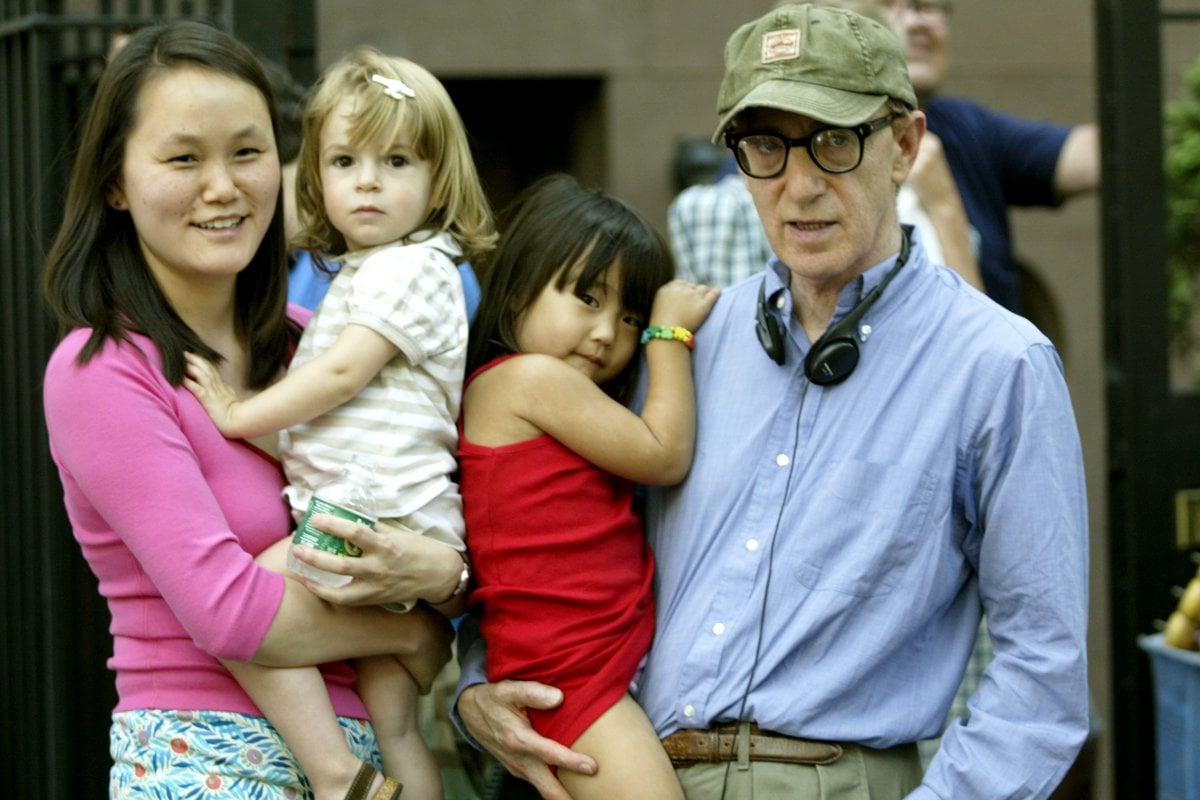 It was January 1992 when Mia Farrow discovered that her adopted daughter, Soon-Yi Previn, was involved in a relationship with her then-boyfriend, Woody Allen.

"[I] was at his apartment because I wasn’t working that day," Farrow explained in HBO's new documentary series, Allen v. Farrow.

"[There was a] stack of Polaroid pictures, of pornographic pictures of a woman, a girl. And I picked them up, and I realised all of them were of Soon-Yi. It was my own child," she continued.

Watch the trailer for Allen v. Farrow below. Post continues after video.

"They wouldn’t put them in Playboy," Farrow said of the photos. "They were Hustler pictures. Really, really raunchy pictures."

Previn, who was adopted by Farrow and her former husband (composer André Previn) as a child, was in her first year of college, while Allen had been in a relationship with Farrow for more than a decade.

When Allen and Previn's relationship later surfaced publicly, Allen admitted that he had no moral qualms with their relationship.

"I didn't feel that just because she was Mia's daughter, there was any great moral dilemma. It was a fact, but not one with any great import. It wasn't like she was my daughter," he told Time Magazine in an August 1992 interview.

"I am not Soon-Yi's father or stepfather. I've never even lived with Mia. I never had any family dinners over there. I was not a father to her adopted kids in any sense of the word."

Previn agreed, later telling Vulture in 2018: "We didn’t think of him as a father. He didn’t even have clothing at our house, not even a toothbrush."

In the controversial exclusive interview with the publication, Previn shared she was "madly in love" with Allen. 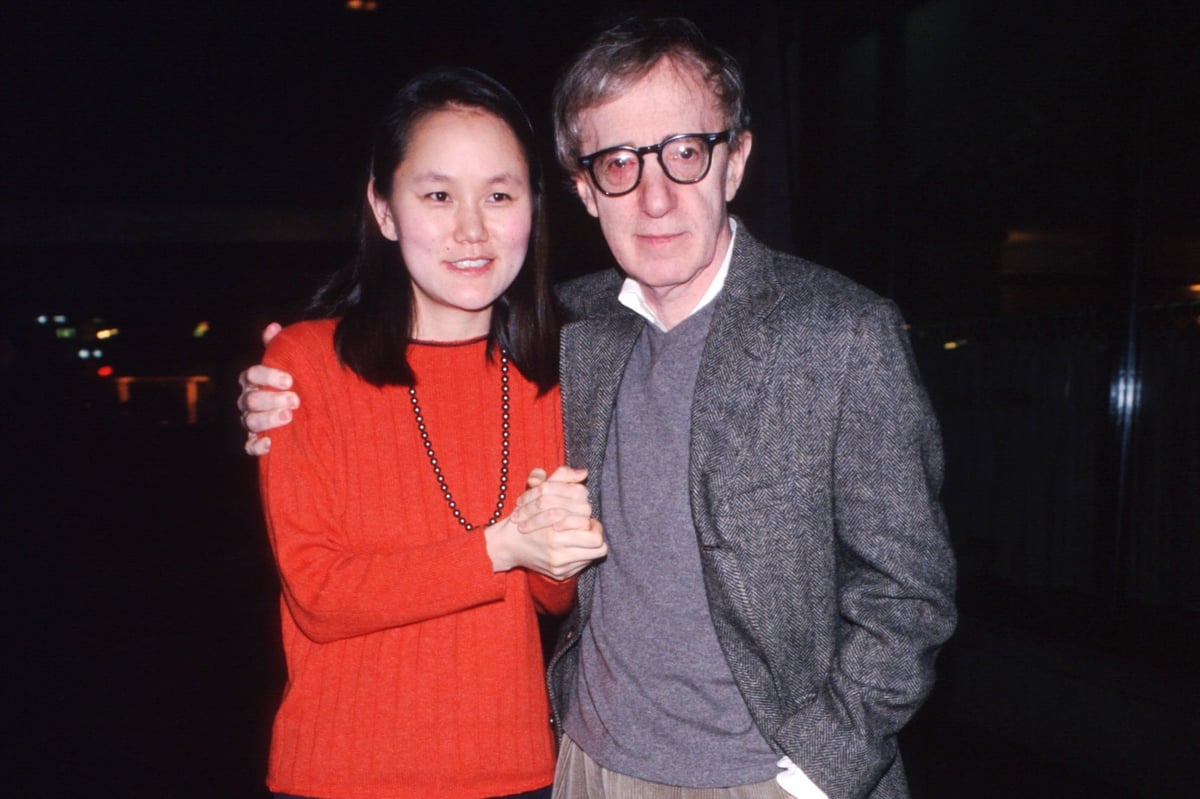 "[I was] completely attracted to him, physically and sexually. I know he’d said that I’d meet someone in college, but I’d already decided," she told Vulture.

"From the first kiss I was a goner and loved him."

To this day, almost 30 years later, Woody Allen and Soon-Yi Previn are still together.

The controversial couple wed in Venice, Italy, on December 23, 1997.

Since then, the pair have adopted two daughters together, Bechet Dumaine Allen and Manzie Tio Allen. 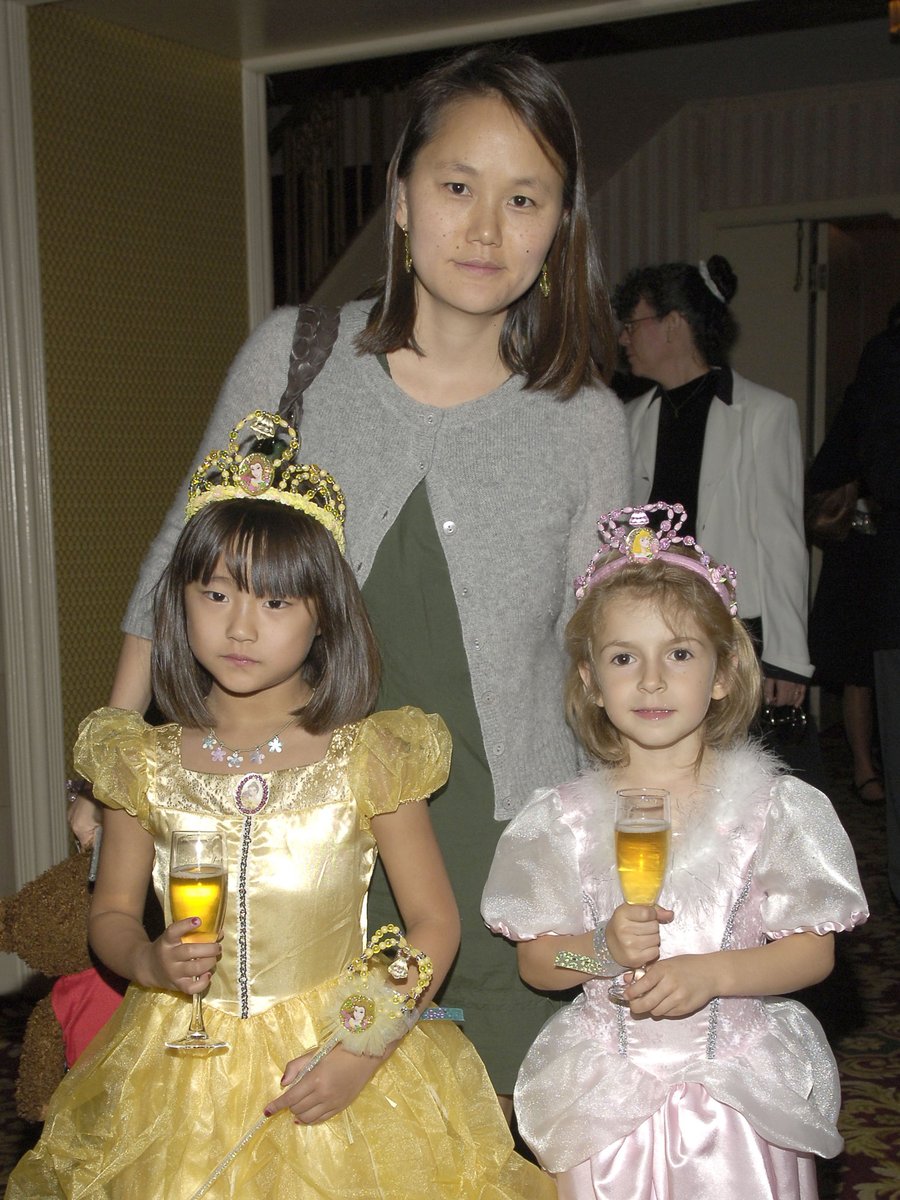 While Bechet and Manzie have never spoken to the media, the pair often feature their parents on their social media accounts.

"I am proud of my parents," Bechet posted on Instagram last month, amid the release of Allen v. Farrow.

"I consider myself one of the luckiest people on Earth to be adopted by these two wonderful people."

In response to Dylan Farrow's allegations that Allen sexually abused her as a child, commenters called Allen a "predator" on Bechet's post.

Dylan Farrow alleged that Allen sexually assaulted her in the attic of Mia Farrow's New York home when she was seven years old. She also claimed the director groomed her, touched her inappropriately and that he once "buried" his head in her lap after taking off her underwear.

Both Allen and Previn have long vehemently denied the allegations.

"Before you start saying things like this, you should think about whether or not you can back your claims," Bechet responded.

"If you’ve read at all about the investigation that happened years ago, you will realise that you don’t have any reason to be commenting on things like this on my Instagram posts," she continued.

"But this is my family and my life and the fact that you think you have any right to express your uninformed opinions on my Instagram, for whatever reason I don’t know, is ridiculous. We should live in a world where we question the validity of the information that is constantly being thrown at us on the internet and in the media. We need to do better."

It's believed Bechet and Manzie grew up in a townhouse with their parents on Manhattan's Upper East Side.

According to Page Six, both girls, who are currently attending college, have worked with Allen on his films.

While Bechet has previously worked as a costume trainee, Manzie has worked as a production assistant.

Although Bechet and Manzie haven't spoken to the media about their parents, Allen's other biological child, Ronan Farrow, participated in the Allen v. Farrow documentary series.

The award-winning investigative journalist, who was a major figure in the #MeToo movement, has long spoken out against Allen. 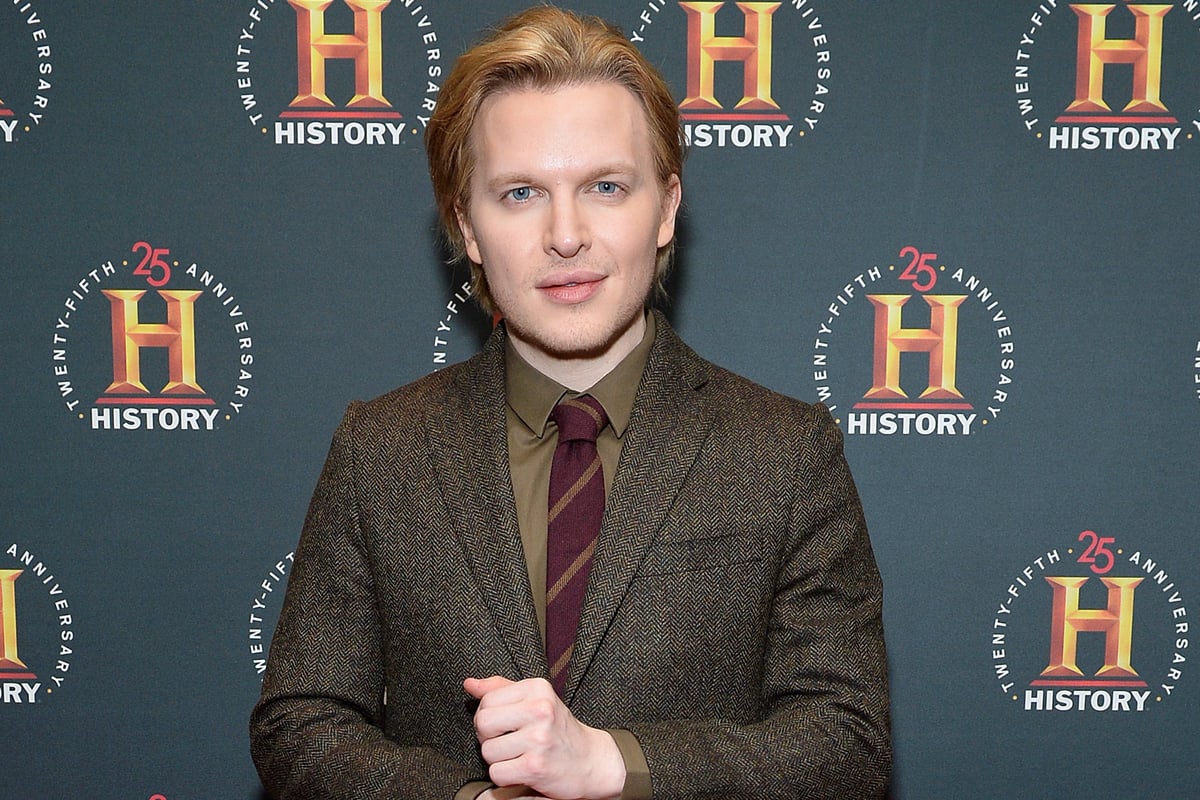 In the latest episode of Allen v. Farrow, Ronan, 33, alleged that Allen offered him financial support on the condition that Ronan supported the director publicly.

"He made funding my college education contingent on me speaking out in his support publicly," he explained.

"The offer always stood that if I were willing to publicly go against my mother and my sister that he would offer financial support, support for my education and perhaps a comfortable life with a powerful, influential guy."

As for Soon-Yi Previn, the now 50-year-old no longer has a relationship with her adoptive mother, Mia Farrow.

In Allen v. Farrow, Farrow, 76, claimed that Allen "weaponised" Previn against her.

"He's weaponised two of my children that he's turned against me," Farrow said, referring to Previn and her adoptive son Moses, who previously defended Allen. 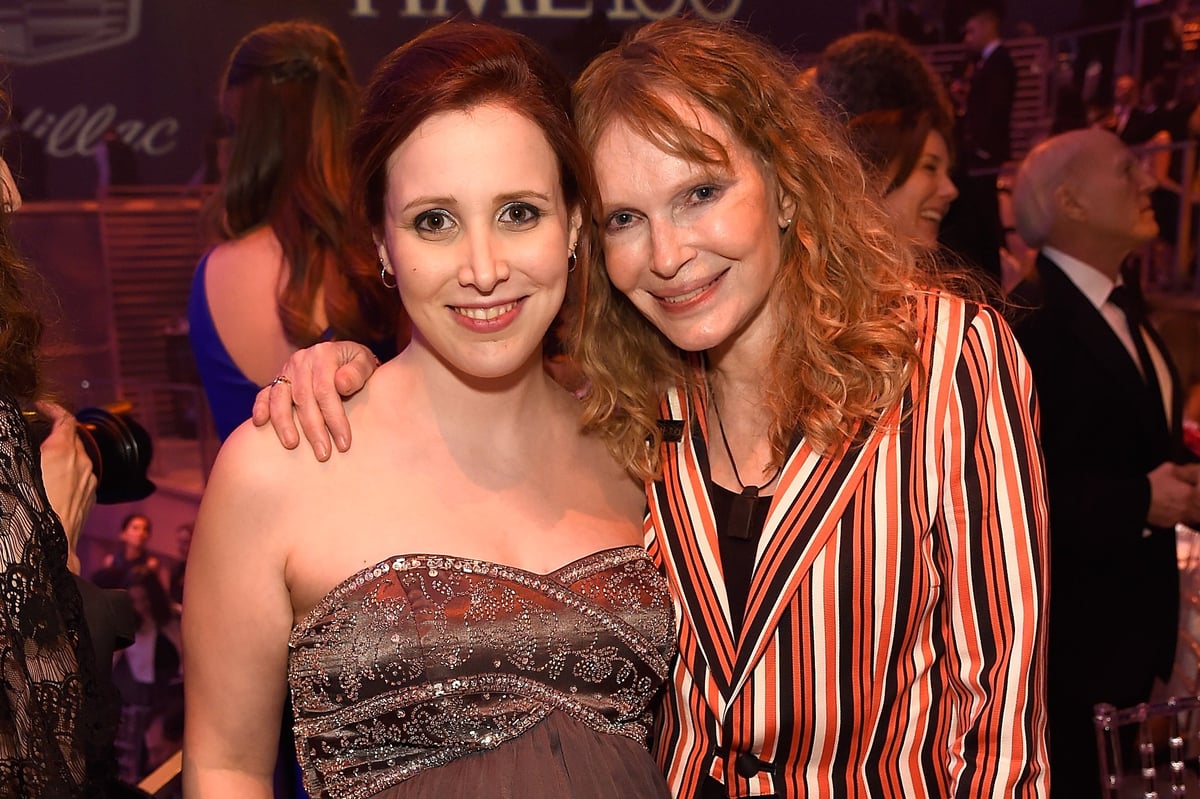 "I love Soon-Yi. It took me six years to throw away the Christmas stocking I knitted for her thinking she would come back, but she didn't."

In response to the Allen v. Farrow documentary, Allen and Previn have labelled the series a "shoddy hit piece".

"These documentarians had no interest in the truth," a statement from the couple read.

"Instead, they spent years surreptitiously collaborating with the Farrows and their enablers to put together a hatchet job riddled with falsehoods.

"Woody and Soon-Yi were approached less than two months ago and given only a matter of days 'to respond'. Of course, they declined to do so."

All four episodes of Allen v. Farrow are available to watch on Foxtel now.

Reply
Upvote
1 upvotes
One of the adopted daughters looks like Dylan probably cuz Woody Allen said we need to adopt a blonde girl.
The TV series Allen vs Farrow is very believable
C
cat a year ago