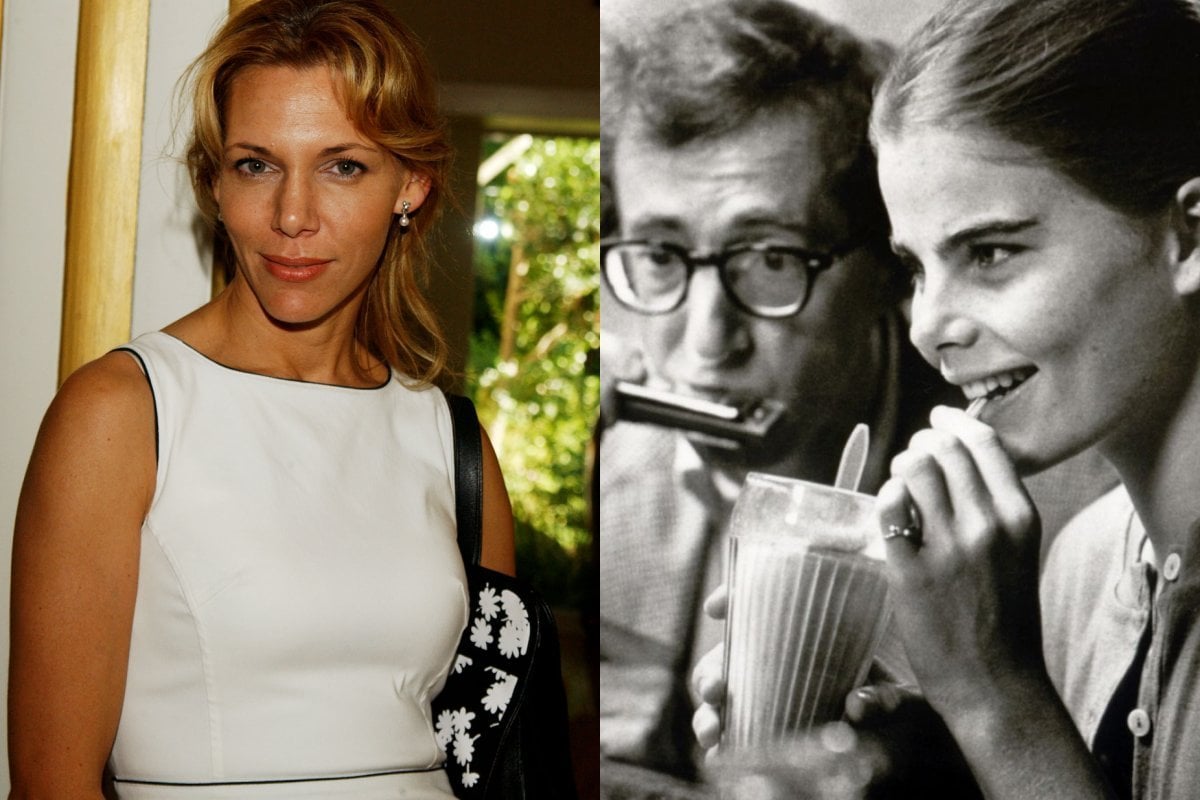 In 1976, 16-year-old Babi Christina Engelhardt was dining with a Penthouse photographer at the legendary New York City restaurant, Elaine's.

The blonde-haired, green-eyed model caught the eye of acclaimed director Woody Allen across the room. He was 41 at the time.

While walking back from the bathroom, Engelhardt dropped a note on Allen's table that read: "Since you've signed enough autographs, here's mine!"

Allen soon phoned her and according to Engelhardt the pair began a clandestine eight-year affair.

Watch the trailer for Allen vs Farrow. Post continues below.

The affair would remain a secret until 2018 when Engelhardt (who has now dropped the Babi and goes by Christina) spoke to The Hollywood Reporter about it.

The affair is making headlines again in 2021 after Engelhardt's appearance in the new HBO docuseries Allen vs Farrow (you can watch the first two episodes on Foxtel and Binge now).

In the 2018 article, Engelhardt said she was a willing participant in the relationship, but felt uneasy in the wake of the #MeToo movement and believed it was time for her to bring it out into the open.

"What made me speak is I thought I could provide a perspective," she told The Hollywood Reporter. "I'm not attacking Woody. This is not 'bring down this man.' I'm talking about my love story. This made me who I am. I have no regrets."

In the article, Engelhardt said Allen phoned her at her family's rural New Jersey home and invited her to his Fifth Avenue apartment. He never asked her age, but Engelhardt told him she was living with her parents in New Jersey and completing high school, while trying to get her modelling career started in Manhattan.

Within a few weeks, they were sleeping with each other. Engelhardt didn't turn 17, the legal age of consent in New York, until that December.

“Well, I was 16 when I met him but I’m going to stand by that 17 we developed a relationship,” Engelhardt said in Allen vs Farrow. “But I didn’t tell him what my age was… just wasn’t that I was holding back anything. He didn’t ask me, I didn’t ask him.”

A few people in Engelhardt's life knew about the affair but they didn't raise an eyebrow. Her family didn't question her when Allen would call her on their home phone.

"I'd holler out, 'Babi, it's Woody!' My brain didn't think something romantic; I was 11 or 12 and a huge fan. I mean, Bananas?!" her younger brother Mike told The Hollywood Reporter.

In 1979, Allen released Manhattan. The film followed Allen’s character, a middle-aged divorcee who starts dating a 17-year-old girl. In the movie, the teen played by Mariel Hemingway, who went on to earn an Oscar nomination for Best Actress in a Supporting Role. Engelhardt believes she was the inspiration behind the film.

“After I saw Manhattan – I’m the same age and there’s Mariel [Hemingway] looking like myself and I thought, oh my God, I’m his muse. I’m an inspiration,” she said in Allen v. Farrow. “And I even said, ‘Am I the muse?’ [Woody] goes, ‘Of course you’re my muse.’”

They had been sleeping together for four years when Allen told Englehardt he wanted to introduce her to his "new girlfriend". She told The Hollywood Reporter it came as a surprise to her as she thought she was his girlfriend.

The new girlfriend was actress Mia Farrow, who was 14 years older than her and who had risen to fame for her roles in Rosemary's Baby and The Great Gatsby.

"I felt sick. I didn't want to be there at all, and yet I couldn't find the courage to get up and leave. To leave would mean an end to all of this. Looking back now, that's exactly what I needed, but back then, the idea of not having Woody in my life at all terrified me. So I sat there, patiently, calmly trying to assess the situation, trying to understand why he wanted the two of us to meet," Engelhardt wrote in her unpublished memoir.

Engelhardt told The Hollywood Reporter she eventually grew fond of Farrow and even engaged in a number of "three-way sex sessions" with Allen and Farrow in Allen's penthouse apartment.

When she was 23, Engelhardt ended her relationship with Allen. She moved to Rome and a few years later started working as an office assistant to filmmaker Federico Fellini.

Now 61, Engelhardt sees her relationship with Allen as complicated.

On one hand, she's proud of the teenager who was able to seduce a "celebrated genius". On the other hand, she now knows that she had no agency in the relationship and that it ultimately caused her years of "sorrow".

“I was very much in love with him, I thought he was magical,” Engelhardt says in the documentary. “I felt I was the lucky one. That’s where I was coming from at that time of my life.”

Despite this, Engelhardt knows the relationship "took a toll" on her.

The first two episodes of Allen vs Farrow are streaming on Foxtel and Binge now.

Reply
Upvote
1 upvotes
Woody Allen is a disgusting predator and I cannot believe that he still has defenders.
C
cat a year ago

Reply
Upvote
3 upvotes
Let’s not call it an affair, it was clearly abuse. The age of consent in the US is 18. He groomed and abused her, like he did go Soon-Yi.
G
guest2 a year ago