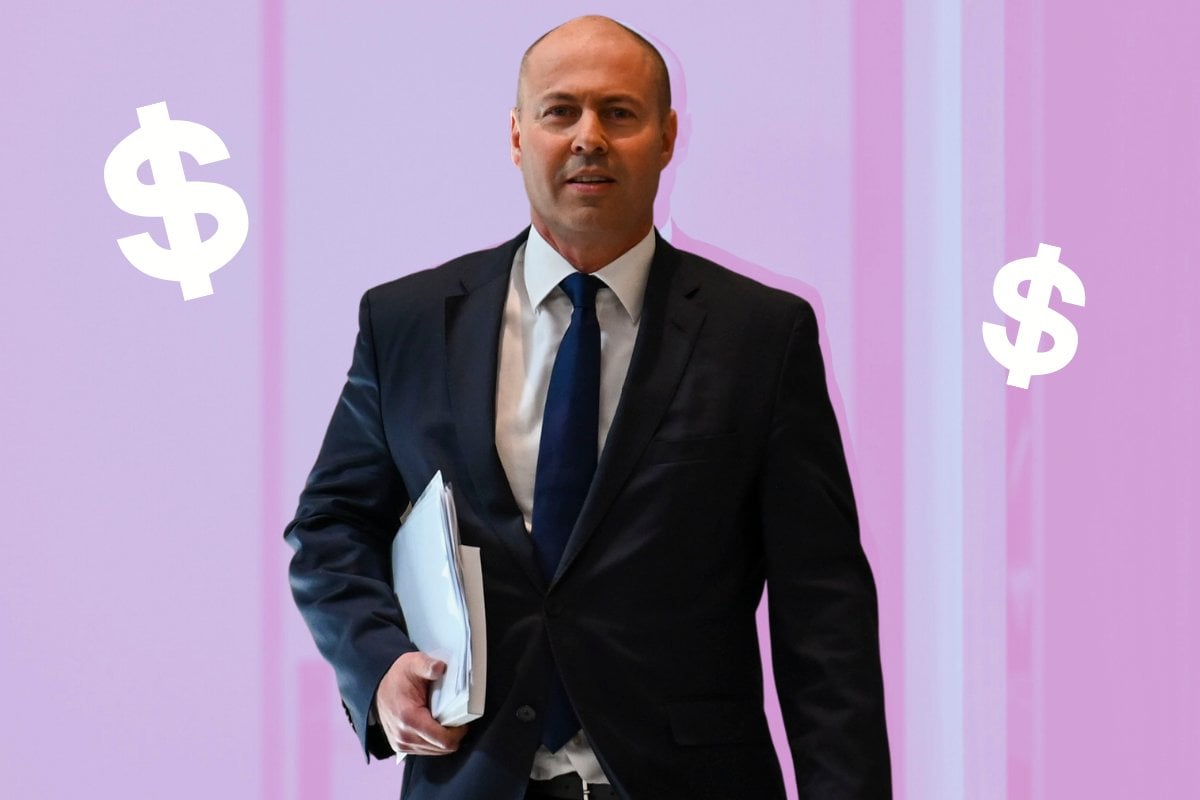 Right now, everyone is talking about the 2022 Federal Budget.

Treasurer Josh Frydenberg handed down this year's budget papers on Tuesday night, outlining how the government will spend funds if they win the upcoming federal election (on a yet to be decided date).

While the budget focused on the rising cost of living, a number of measures centred around women in the areas of safety, health, economic security and leadership.

So what does the budget actually mean for women?

To help you better understand numbers, we've broken down all the budget measures that are focused on women, including what the experts are saying.

The government announced they will provide "targeted funding for women’s health and wellbeing" in this year's budget. This includes:

$330.6 million will be provided over four years from 2022-23 to fund initiatives supporting the maternal, sexual and reproductive health of Australian women and girls. This will support the National Women’s Health Strategy 2020-30.

The government will provide funding to establish a National Women's Health Advisory Council. They will also provide additional investments in a range of areas, including increasing the awareness of cardiovascular disease in women and enhancing bereavement support for families who have experienced stillbirth.

With one in nine Aussie women affected by endometriosis, the government will invest $58 million to support diagnosis, treatment and management.

The funding will go towards building treatment centres, improving telehealth services and offering Medicare rebates for MRI scans related to the disorder. Doctors will also be provided with guidance on the best treatment plans.

The government will invest $9.7 million in surge capacity for BreastScreen Australia to support women who missed out on breast screening due to COVID-19.

Lastly, $1.2 million of funding will go towards engaging with senior midwifery practitioners to consult and map maternity service models, and develop options to integrate service models into emerging and current primary care models.

Helen Dalley-Fisher, the convenor of the Equality Rights Alliance, says the $58 million endometriosis funding is a "really good step forward".

"It's fantastic to see some funding going not just to research in relation to endometriosis, but also into the pain clinics," she told Mamamia.

"We see this as part of a progression [so] we'd be looking for then... moving into some education around getting GPS to be able to diagnose endometriosis better. And once you've got those three pieces in place, you've got a pretty good plan for dealing with endo."

She also praised the funding for the Women's Advisory Health Council as "there's been a real lack of attention to women's health in recent years".

"We've got a women's health strategy, but nobody's really watching whether or not it's being implemented or whether we're getting results from it. And so having an advisory council to monitor that, and actually do some of the work around talking to women... that's a really good piece of work."

However, Dalley-Fisher says there needs to be more focus on women's reproductive and sexual health in the budget.

"That's an area where Australia actually lags a little bit behind our international partners. We're not great at getting particularly young women to have access to different forms of contraception, for example, and so there's some real work to be done there."

The government says improving the safety of women and girls is a "key priority", with one woman killed by a partner every 11 days.

To combat gender-based violence, the government is providing a further $1.3 billion (bringing the total to $2.5 billion) to support the implementation of the National Plan to End Violence against Women and Children 2022-2032.

The funding is focused on four pillars within the national plan; prevention, early intervention, response and recovery.

Gender equality and safety advocates say the budget doesn't go far enough when it comes to addressing violence against women.

"Prevention is critical to ending gender-based violence. Yet tonight the government failed to resource a critical pillar of violence prevention efforts in schools: upskilling the educators who will be asked to deliver critical lessons to students across the country."

"How students are taught is as important as what they are taught. And if respectful relationships education isn’t implemented well - it not only doesn’t help, it can be actively harmful."

“Everyone knows that domestic and family violence is one of the main reasons women and children are pushed into homelessness in Australia," she said in a statement.

"Our Federal Government must do more to help prevent homelessness occurring when people are escaping violent situations The severe shortage of long-term housing means women and children escaping domestic and family violence are often left with nowhere suitable to live."

The government will provide $482 million to "enhance women’s economic security" which will focus on "maximising flexibility and choice".

$346.1 million will go towards establishing Enhanced Paid Parental Leave (PPL) for Families, allowing eligible working parents to share up to 20 weeks of fully flexible leave to use in ways that suit them.

The government is also broadening the PPL income test to include a household income threshold of $350,000 per year.

$38.6 million will be provided over the next four years from 2022-23 to support women in trades. More support will also be given to women who commence in higher paying trade occupations on the Australian Apprenticeship Priority List, such as mentoring and wraparound services.

Women in the tech workforce.

$3.9 million is being used to fund the 'Supporting Women’s Mid-Career Transition to the Tech Workforce' initiative.

A further $18.5 million will go towards the Workplace Gender Equality Agency, which will help private sector organisations find opportunities to close the pay gap and increase women’s workforce participation.

When it comes to women's economic security, Dalley-Fisher says more needs to be done to support women's access to affordable housing.

"We haven't seen anything on the affordability of housing that's actually going to really help women in this budget, we've seen... an extension of the deposit guarantee for first home buyers, but we know those schemes tend to actually put a little bit of upward pressure on house prices," she told Mamamia.

"We would have liked to see some of the money that's going into infrastructure, going into providing the infrastructure of homes [and] the sort of builds that would provide properties that could then be used to reduce the wait times on social housing, because that takes some of the economic pressure off women."

She also said she was "disappointed" to see the lack of measures designed to deal with the cost of childcare.

"And so we do need something done about childcare and it was a disappointment to not see that in the budget."

To better support women in leadership positions, the government is funding the following initiatives:

The government will provide an additional $18.2 million for the Women’s Leadership and Development Program, including $9 million from 2023-24 to 2025-26, to expand the successful Future Female Entrepreneurs program.

Lastly, $9.4 million will be used to expand the Future Women’s Jobs Academy and to support gender balanced boards.

Reply
Upvote
It reduces funding to prevent climate change and is nothing but a shameless attempt to buy votes. A budget that shows zero leadership- what else would we expect from this government though.
S
snorks 2 months ago