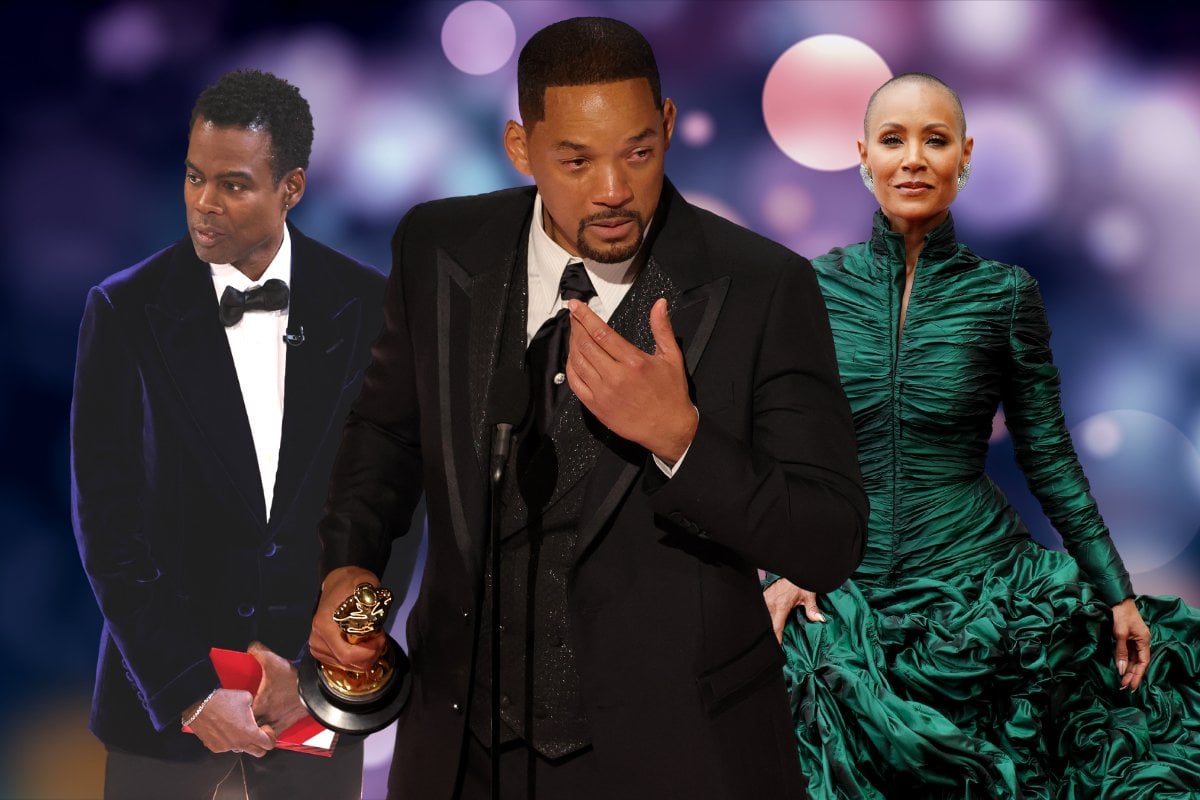 Yesterday we watched pop culture history in the making.

In a fit of rage.

Dubbed "The Slap Heard Around The World", it instantly became a 'remember when' moment. A moment that will be discussed and debated and dissected for years to come.

It was a surreal moment because we're used to seeing celebrities at their most 'manufactured'. Especially at events like the Oscars. They smile and wave on the red carpet. Laugh along at the host's jokes, even when they're the butt of them. They thank all the right people during their acceptance speech. And have just the right amount of fun at the after parties. Every movement, every word is carefully crafted to ensure that if they do become the viral story from the event, it's for the right reasons.

Watch the trailer for King Richard. Post continues below.

Will Smith striking Chris Rock threw all of this out of the window. It felt like a glitch in the matrix, like we were seeing something we definitely weren't supposed to.

It also felt surreal because of the sheer speed of the incident. Just seconds before Smith stalked onto the stage, Rock had made a joke about Jada Pinkett Smith's shaved head.

"Jada, I love you. G.I. Jane 2, can't wait to see you," the comedian said. It's important to note here that Pinkett Smith's head is currently shaved because she was diagnosed with alopecia in 2018, an auto-immune disease which leads to significant hair loss.

At first, Smith appeared to laugh along with the joke, then he quickly walked on stage, hit Rock, and sat back down.

The slap happened so quickly that no one - not Rock, not the crowd, not the people working behind the scenes at the biggest award show in the world - knew whether it was real or staged.

It was only when Smith returned to his seat next to his wife and yelled out, twice, "KEEP MY WIFE'S NAME OUT OF YOUR F**KING MOUTH," that we realised this moment was 100 per cent genuine.

There was real, unmitigated rage in Smith's face.

The crowd was shook.

For a split second the world was lost for words, and then suddenly, like the sound of wind whooshing past your ears, the world became incredibly loud.

Within minutes, a fierce debate about the incident erupted on social media. And in the coming hours, it seemed like everyone had an opinion. And everyone had chosen a firm side.

Celebrities and social media personalities were releasing 'personal statements' about the incident.

Fights erupted in the comments sections. Twitter was more of a bin fire than normal. TikToks were hastily recorded and uploaded before the next award had even been handed out.

Soon, it became clear there were two distinct 'sides' to the argument. And that each side couldn't fathom listening to the other side.

First, there were those who believed Smith was justified in his reaction. The people on this side of the fence argued that Smith's violence was a reaction to a long history of black women being the butt of the joke. They argued that by making fun of Pinkett Smith's auto-immune disease and her hair, Rock had crossed an uncrossable line. A line that had been crossed way too many times before.

A quick peruse of Twitter will show you how much the joke upset women of colour who have been the target of this kind of public humiliation for far too long.

Funny how people are calling the slap toxic masculinity, while excusing the toxic masculinity, misgynoir, and ableism in the “joke.” Words are violence. Quit tone policing the reaction to violence. Maybe Chris Rock should have kept Will Smith wife’s name out fucking his mouth. pic.twitter.com/7XvbKCGTx5

Alopecia is a painful experience that many Black women go through and should not be joked about.

The concept of being ‘the protector’ can be a form of toxic masculinity.

Black women are rarely protected and deserve to be protected.

How does a black man make a whole documentary highlighting the importance of Black hair and then turn around and diss a Black woman struggling with alopecia??? Doesn’t make sense to me #BlackTwitter #WillSmith #Oscar pic.twitter.com/kIEP8lsuki

People on this side of the argument believed Smith was standing up for not only his wife, but a group who had been maligned forever, and a group that felt visceral relief that someone had finally stood up for them in such a public manner.

Alongside this group were those that were outraged that a joke had been made about a woman's auto-immune disease in the first place.

This group was also rightfully angry because they had witnessed people with illnesses and disabilities being the butt of cheap jokes for far too long.

Both these groups could sit right where Pinkett Smith was sitting in that moment and feel deep empathy for her. They could also feel the rage Smith felt.

seeing someone get slapped

for making a joke out of someone’s medical condition.#Alopecia

The people on this side of the fence are right.

On the other side of the fence are the people who strongly believe that violence is never the answer, no matter the question.

These people believe that by striking Rock, Smith bought into a dangerous narrative that's all too real for anyone who's ever been a victim of men's violence. Or lost someone they love to men's violence.

For these people, seeing the pure rage in Smith's face, and witnessing a man lose control and act out in violence, was extremely triggering.

Glennon Doyle summed it up best when she posted on Instagram: "Violence is never "proof of love". That's a deadly idea that has fueled and excused domestic (and all) violence for far too long."

As someone who grew up in a DV household if you’re seeing the Oscar stuff & being triggered bcoz ppl are saying it’s defence/honour - believe it’s absolute BS. You know what you know. You’ve seen how it’s an excuse to lay hands. It’s triggering because it’s truth.

According to Judd Apatow, Will Smith has so much raw power that he could have easily slain Chris Rock with a single slap to the face pic.twitter.com/e7Tl7YynGI

Violence isn’t ok. Assault is never the answer. Also? This is the 2nd time that Chris has made fun of Jada on the #Oscars stage, & tonight he went after her alopecia. Punching down at someone’s auto-immune disease is wrong. Doing so on purpose is cruel. They both need a breather.

Twenty minutes after the slap, Smith once again stepped onto the Oscars stage. This time to accept the Oscar for Best Actor for his portrayal of Venus and Serena Williams' father Richard in King Richard.

He cried throughout the speech, explaining that "love makes you do crazy things". He attempted to compare himself to Richard Williams, saying like Richard, he is a family man who will do anything to protect his family. Once again, buying into the narrative that it's okay to be violent in the right circumstances.

Smith's speech garnered a standing ovation and after the ceremony wrapped up, he was celebrated by the industry, with footage of him dancing to his music at the Vanity Fair afterparty going viral.

People on this side of the fence believe the celebration of Smith only further cements the dangerous narrative around men's violence and rage.

These people are right too.

Both of these narratives can be true at the same time.

Chris Rock's joke was deplorable. In a five-second soundbite he made fun of an autoimmune disease that many women silently suffer from. A disease that is misunderstood and underrepresented in mainstream media.

In that same five second soundbite, he diminished Pinkett Smith's role as one of the most successful women of colour in Hollywood and turned her into a cheap punchline.

In that five second soundbite, he also made light of the pain she had endured over the last four years while dealing with her diagnosis and its impact on her self image.

It was a terrible joke, and Smith and Pinkett Smith, and everyone watching from home, had every right to be mad. But that doesn't excuse the use of violence.

Furthermore, Rock has form. At the 2018 Oscars, he made another joke about Pinkett Smith, referring to her as a "TV actor". And you only have to do a light Google to find all of Rock's other controversies. In 2020, he defended fellow comedian Jimmy Fallon's use of blackface in a 2011 skit.

It's understandable that Smith had reached his breaking point. And he had every right to call out Rock's behaviour. But that still doesn't excuse violence.

LISTEN: What really lead to the Will Smith Oscars slap. Post continues below.

Two men behaved appallingly in the heat of the moment. And at the end of the day, there were no winners in this situation.

Not Rock who was assaulted on live TV. Not Smith who will be forever marred by the violence of his actions. Not Pinkett Smith who will forever be associated with Rock's joke and Smith's reaction to it. And certainly not the millions of people around the world who felt deep fear, and anger, and sadness watching all this play out on their TVs and on social media.

There are two narratives surrounding this moment. And both of them, unfortunately, are true.

Reply
Upvote
2 upvotes
Both narratives can be true at the same time? Really? How?
Time for a new narrative I'd say.
<
<deleted> 4 months ago

Reply
Upvote
@guest he him judging by all the past situations where men assaulted women at the oscars, its quite possible that there wouldnt have been any reaction if Chris Rock wasnt a man.
<
<deleted> 4 months ago

Reply
Upvote
@guest he him you cant have looked very hard. Jim Carey assaulted Alicia Silverstone in 1997 (ironic as you will find Carey loudly proclaiming is disgust about Will Smith to whomever will listen), and Adrien Brody assaulted Halle Berry in 2003.
And in 1973 John Wayne had to be restrained by 6 security guards from attacking the  Sacheen Littlefeather out of nothing but racist hatred and bigotry.  Clint Eastwood also got on stage and insulted her and was cheered by the audience.
Resources
Very Peri
News
General
Opinion
True Crime
Politics
Sport
Explainer
Entertainment
Celebrity
Reality TV
Movies
TV
Books
Rogue
Royal
Lifestyle
Beauty
Fashion
Weddings
Home
Wellness
Health
Fitness
Travel
Food
Family
Before The Bump
Pregnancy
Baby
Kids
Teens
School
Parent Opinion
Work & Money
Money
Finance
Career
Lady Startup