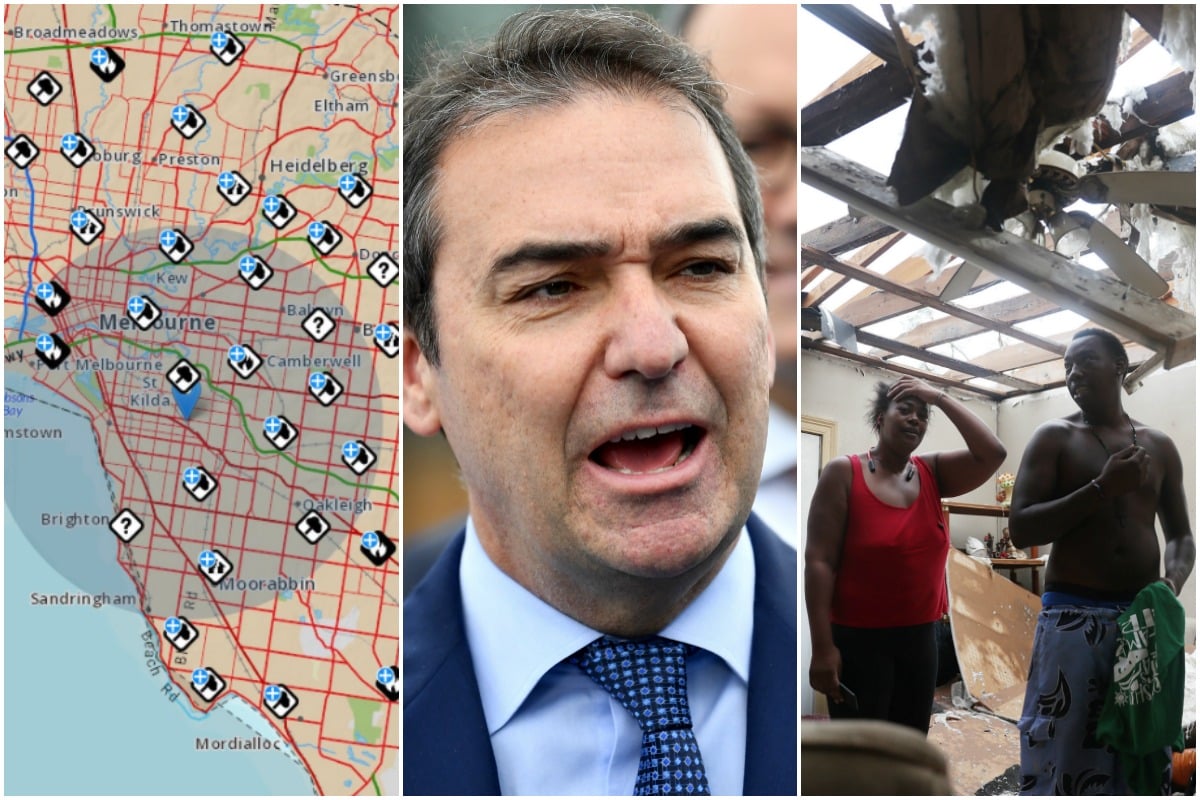 A wild storm ove﻿﻿rnight in Melbourne has left three people dead, including a four-year-old boy who died when a gum tree fell on him in Blackburn South.

A 59-year-old Tecoma man died when his vehicle was hit by a tree, and a 36-year-old woman, who was a passenger in a car, was also killed when a tree fell on her car on the Maroondah Highway.

The SES has received close to 2000 calls for help, most of those in the east and south east.

JUST IN: There has been a tragic development after a storm lashed parts of Victoria, with confirmation that a third person has died - a four year-old boy. @ChristineAhern #9News pic.twitter.com/HyC87ayUcG

The Bureau of Meteorology warned residents to “batten down the hatches” as a cold front swept through the state with damaging winds, thunderstorms and possible hail.

Winds were set to reach gusts of more than 120km/h outside of Melbourne, including areas such as Wonthaggi, Sale, Bairnsdale, Orbost, Falls Creek and Omeo. 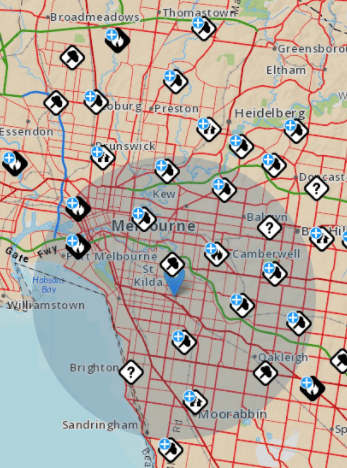 Victoria must return to coronavirus case numbers not seen since early July before Premier Daniel Andrews spells out how restrictions will be eased.

While the state had 23 deaths on Thursday, the daily case number dropped to 113 and it has been below 150 for the past four days.

Most key statistics are showing that the worst of Victoria's second outbreak is over and there is growing anticipation about how the government will ease current restrictions.

Melbourne's stage-four lockdown and the stage-three rules for regional Victoria are due to end on September 13.

But Mr Andrews said it was too early to go into detail about how restrictions will ease, only saying that a roadmap will be made public "soon".

Victoria is in the depths of lockdown fatigue, with police vowing to end daily protests that have happened this week in suburban Dandenong.

A large police presence greeted the latest protest on Thursday night, with about 100 people in attendance.

DANDENONG: Despite lower crowd numbers compared to previous nights, an anti-lockdown protest in Dandenong has continued for the second night in a row, with people warning they’ll continue to march every night despite the heavy police presence.@theheraldsun https://t.co/vBNww6rdIZ

Two men were arrested at the gathering after allegedly failing to provide identification for breaching the chief health officer's directions and police issued a further 17 fines.

COVID-19 appears to be spreading into Sydney's northern suburbs and up into the Central Coast with nine new cases detected yesterday from 30,000 tests.

Further investigations have revealed COVID-19 cases have attended a number of locations in the CBD, Hornsby, Willoughby, and the Central Coast.

There are six NSW COVID-19 patients in intensive care, with four ventilated.

In Queensland 7000 prisoners in the state's corrections system remain in lockdown after a corrective services trainer was diagnosed with the virus.

The state only recorded one new case yesterday - a man in hotel quarantine.

More coronavirus measures have been eased in South Australia with communities near the Victorian border given back their freedom to move between the two states.

From Friday, people living or working 40 kilometres each side of the border will be allowed to come and go but will be subject to regular COVID-19 testing.

The buffer zone was dropped last week, closing SA off to everyone except essential travellers coming from Victoria.

Premier Steven Marshall says the easing of restrictions comes after the remaining virus cases in regional areas close to South Australia were cleared. 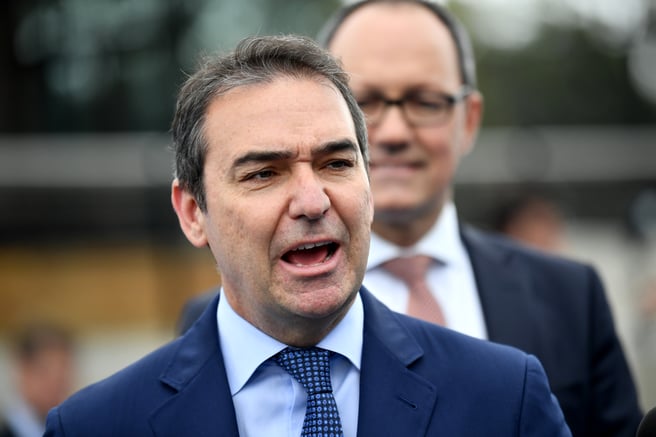 "We've always said we wanted to remove that restriction the very second that we could," Mr Marshall said.

"It has been an enormous imposition on those border communities. We apologise for the inconvenience and frustration."

In other changes now in place, people travelling to SA from Queensland, the Northern Territory, Western Australia and Tasmania who transit through the Sydney or Canberra airports will no longer need to self-isolate for two weeks.

Home gatherings in SA can also increase from 20 people to 50.

There were no new coronavirus cases reported in South Australia on Thursday, and only three are still considered active.

Argentine barley shipments have started streaming toward China after a three-year lull as a trade conflict between Asia's top buyer and main supplier Australia changes global supply flows of the grain used for livestock feed and beer.

Argentina is on track to send at least 250,000 tonnes this year and a record 380,000 tonnes in 2021, according to export licences and private company declarations seen by Reuters. That is up from virtually nothing in 2019.

"China turned toward us this year because of its conflict with Australia," an Argentina-based trader said, referring to a political spat that saw China slap steep anti-dumping and anti-subsidy duties on Australian barley imports in May.

Australia's barley output - estimated at 10.2 million tonnes in the 2020/21 crop year according the US Department of Agriculture - dwarfs Argentina's 3.5 million tonnes.

Hurricane Laura has made landfall in southwestern Louisiana as one of the most powerful storms to hit the state, with forecasters warning it could push a massive wall of water 65km inland from the sea.

Laura made landfall just before 1am on Thursday as a Category 4 storm packing winds of 240km/h in the small town of Cameron.

"This is one of the strongest storms to impact that section of coastline," said David Roth, a forecaster with the National Weather Service.

Hurricane Laura is the strongest storm in more than 150 years to hit Louisiana.
@GaryTuchmanCNN, on the ground in Lake Charles, Louisiana, says it “felt like we were experiencing an earthquake with dozens of aftershocks.” https://t.co/r2jslJviut pic.twitter.com/oTbSPaY8n8

"We worry about that storm surge going so far inland there because it's basically all marshland north to Interstate 10. There is little to stop the water."

Officials across the hard-hit area said it would be several hours before they could get out to begin search and rescue missions. Downed trees blocking roadways were expected to be the biggest immediate challenge for rescuers. 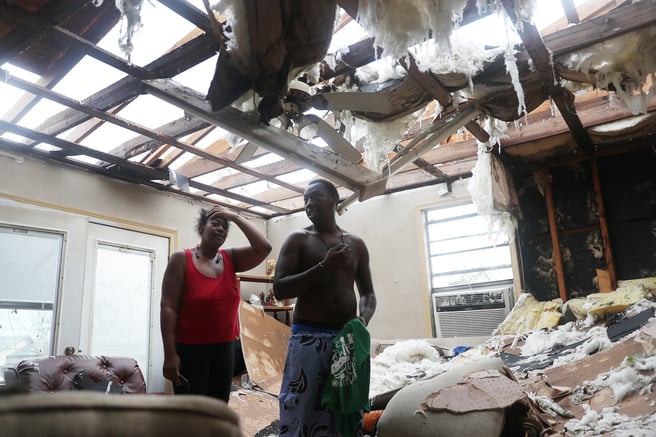 Latasha Myles and Howard Anderson stand in their living room where they were sitting when the roof blew off around 2:30am as Hurricane Laura passed through the area in Lake Charles, Louisiana. Image: Joe Raedle/Getty

At least four people have been confirmed dead.

- The European Commission says it has signed a contract on behalf of EU states with British drugmaker AstraZeneca for the supply of at least 300 million doses of its COVID-19 vaccine. This is the same deal Australia has signed.

- There are calls for Christchurch shooter Brenton Tarrant to be sent back to Australia to serve his prison time.