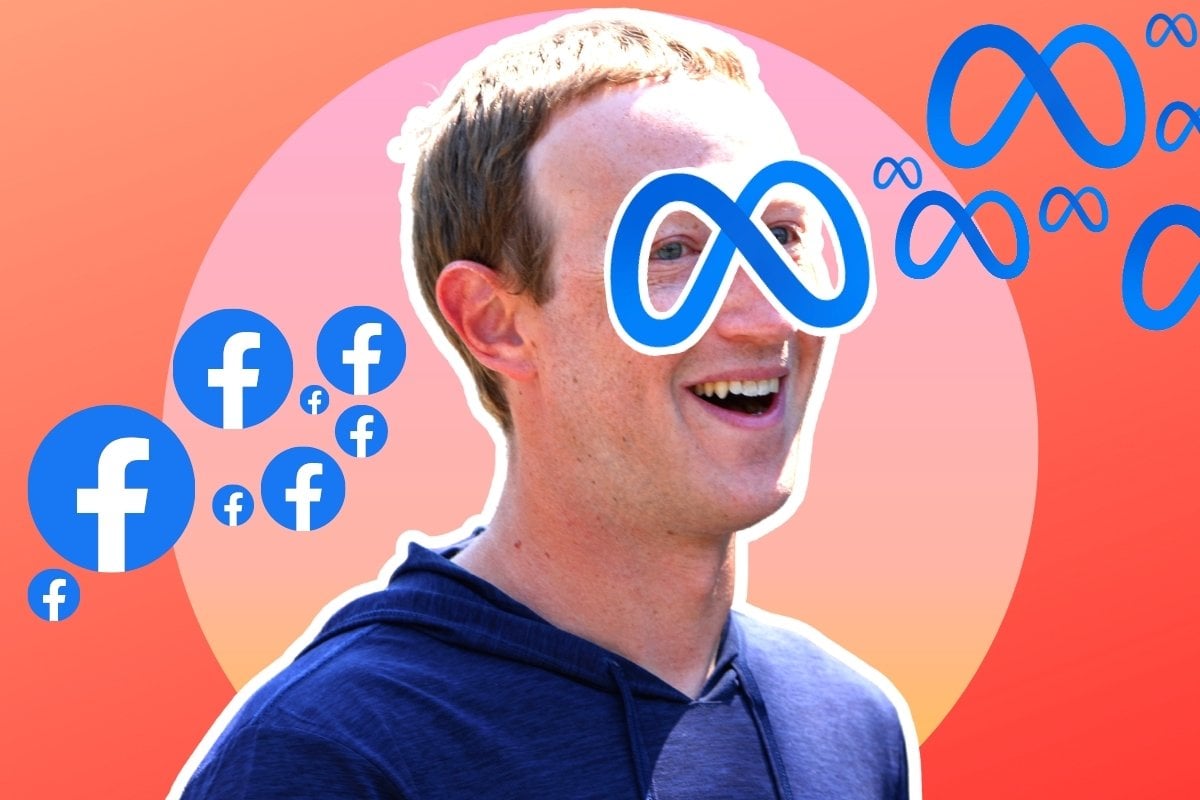 Somewhere deep in the bowels of Facebook's Silicon Valley head office, a public relations executive is patting themselves on the back.

I mean, the idea to change the company's name was genius. Now, no one is going to remember the 'Facebook Papers' — those leaked internal documents that showed the company well and truly knows (and downplays) how much harm its products are causing.

Besides, Facebook is ready to move on, to become a fully fledged "social technology company", rather than just an app that an enterprising college student named Mark Zuckerberg originally invented to rate the attractiveness of his female peers.

The rebrand (which is a fancy PR term for 'Hey everyone, look over there!') involves switching the Facebook corporate name to — wait for it....

(Quick, what and where is a metaverse? Anyone?)

The metaverse is the next evolution of social connection. It's a collective project that will be created by people all over the world, and open to everyone. You’ll be able to socialize, learn, collaborate and play in ways that go beyond what’s possible today. pic.twitter.com/655yFRm8yZ

"In the metaverse, you’ll be able to do almost anything you can imagine — get together with friends and family, work, learn, play, shop, create — as well as completely new experiences that don’t really fit how we think about computers or phones today.

"In this future, you will be able to teleport instantly as a hologram to be at the office without a commute, at a concert with friends, or in your parents' living room to catch up."

[Note to self: Seek comment on whether you'll be able to stop a parent's hologram from popping in unannounced.]

Basically, said Zuckerberg, the name change is a reflection of the fact that the company is pivoting to be about more than its 17-year-old social media platform.

It's looking toward a theoretical future in which users seamlessly traverse online, virtual and augmented worlds.

The move explains some of Facebo– sorry, Meta's recent product announcements, including the release of its new virtual reality headset and a platform called Horizon Workrooms, which will allow colleagues to gather in virtual reality in lieu of attending in-person meetings.

The new name comes, of course, with a snazzy corporate logo, which is either an infinity symbol or the eye mask of an animated supervillain.

How it started: How it's going: pic.twitter.com/m7KiminsYn

Wait, so is the Facebook app changing its name?

If you're fretting about how to explain all of this to your Facebook-loving dad who has only just got the hang of emojis, there's no rush.

The Facebook app itself will be retaining its name (as will the company's other brands, Instagram and WhatsApp); it's only the parent company that's becoming 'Meta'.

It's kind of like how in 2015, Google restructured itself under a parent company called Alphabet. Or how the tobacco giant, Philip Morris (which owns cigarette brands including Marlboro and Benson & Hedges), rebranded to Altria Group in 2001. Or how rapper Kanye West recently changed his name to Ye, because it's the most used word in the Christian Bible — or something.

In other words, nothing about this announcement will really affect the average consumer. It's a corporate play that likely involved millions of dollars worth of consultancy fees and lots of boardroom discussion about 'innovation' and 'pivoting' and 'disruption'.

It's about the company moving into new fields without carrying the baggage of its tarnished hero product.

See, the platform has been in a sticky spot lately. There was its struggle to halt misinformation about the COVID-19 pandemic and the 2020 presidential election. And recently, the revelations leaked by a former employee that the company actively put profits ahead of consumer safety — reports that led to a congressional hearing.

No surprises then that the Meta move has been met with an enormous eyebrow raise by many.

I have done many things in the past that I'm not proud of but I have changed my name to Meta so they don't count anymore!

Facebook is changing its name to Meta. They should have just stopped at Meh pic.twitter.com/LniWs5wqOn

I preferred “meta” when it was attached to “mucil.”

Facebook changing its name to Meta feels the same as when one of my spiritual friends would change their name to Ramana or Moksha or some grandiose bullshit. It's like shut the fuck up Darryl, you're a white asshole from the suburbs like the rest of us and you work in IT.

If it really wanted to be Meta, Facebook should have renamed itself “Itself”.

The PR exec must be so proud.