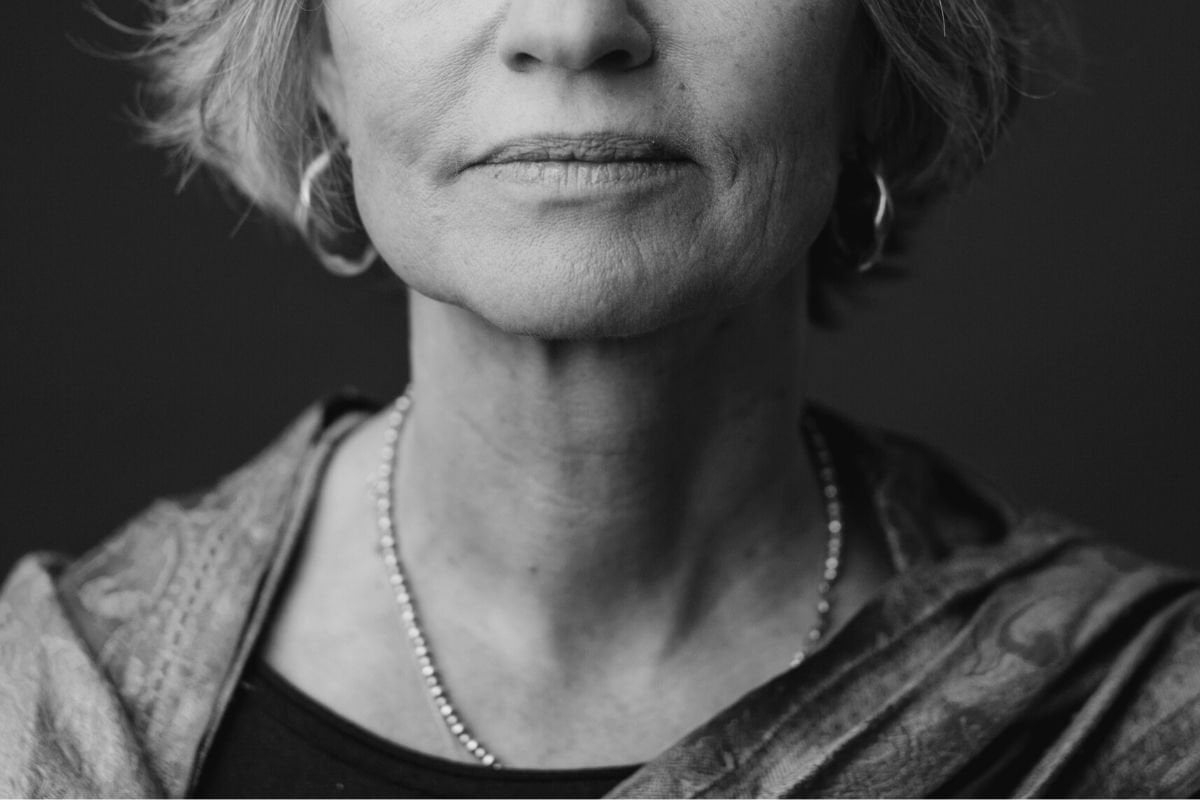 Warning: This post deals with graphic descriptions of child abuse and rape and may be triggering for some readers.

When Annie*, 50, watches rom-coms and the couple on screen start making love or passionately kissing on a park bench at sunset, it grosses her out.

To her, it doesn't seem real or even mildly plausible.

Despite being in three long-term relationships Annie has never had a loving, enjoyable experience of sex. Sex has always been a violent act in Annie's world. From the age of 10, her life has been dictated by a tragic tale of abuse, rape and torture.

Her stepmum was her first abuser.

As Annie told Mamamia, she used to "tie me to a chair and penetrate me with objects".

"She would cut me on my vagina and clamp things - like pegs - on my breasts," Annie said.

Her stepmum never gave an explanation for the abuse, only to tell Annie it was a "game".

As a young girl, Annie would dissociate herself from the trauma, so much so she only remembers flashes of that time now. She does remember a metal ruler being used to make cuts on her body. She's thankful she doesn't remember what her stepmum put inside her.

When her father died, Annie didn't have to go to that home anymore. But at 11, she was being sexually assaulted and raped by other members of her family.

Three different cousins - two boys and one girl - raped her over the course of the next two years. Hands would creep under duvets in the TV room, but like during her stepmum's abuse, Annie felt like she couldn't say a word.

"I remember coming home and feeling this hatred towards my mum because I felt like I couldn’t tell her because it would cause too much trouble," she told Mamamia.

Annie grew up in the country in the 80s, in a time when stranger danger was the only kind of danger they were taught to fear.

By the time she was 15, Annie was homeless. She'd spent her childhood being told she was "difficult" and "spoilt" as she'd kick up a fuss so she wouldn't be sent to her abusers' homes. During her teenage years, Annie was filled with an anger she didn't know what to do with, so she attached herself to the first guy that came along and paid her attention - a relationship her mother showed her the door over.

Annie fell pregnant aged 18, and went on to have four children with two different men. She stayed in the relationships despite being physically, sexually, financially and emotionally abused.

"Every relationship I have been in, they’ve been abusive. But I just thought that was normal," she explained. "I never walked away because I was so desperate for a family for my kids."

Despite raising four children amongst three abusive relationships, Annie managed to graduate in her 30s with qualifications to become a social worker. Once again, she was faced with adversity, forced to leave her first job after being sexually harassed by her superior.

In her 40s, Annie was sexually assaulted again. Her son's friend, then 24, tried to rape her in her own home. Her labrador pulled him off her, and she took him to trial. He went to prison for 12 months.

As Annie told Mamamia, she hasn't been strong enough to get justice for her 10-year-old self yet. Or the woman abused in her 20s and 30s. But she often wonders what she would do if she had the guts.

"I don’t know what I want. I want a genuine apology and an admission of guilt," she said, referencing her childhood trauma. All of those family members remain alive.

Annie has never told anyone, before this interview, all the intimate details of the trauma she's experienced. She's ashamed that so much violence has happened to her in so many different circumstances.

"I have always blamed myself because it just keeps happening," she said.

But Swinburne University of Technology research re-confirmed in 2020 that child sex abuse survivors are five times more likely to be the victims of sexual assault later in life. That likelihood increases if survivors experience abuse before the age of 12.

When Annie was in her late 30s, she became addicted to opioids after she was given them to help with a neck injury. She can still remember the euphoria.

"I remember thinking ‘is this what it feels like to be normal?'"

Annie has spent her entire life scared of her own shadow. The drugs eased that feeling for the next five to six years until she finally kicked the habit. Now she relies on counselling and support from the Blue Knot Foundation, which has helped her overcome her feelings of shame.

She's telling her story now because she spent her entire life in silence.

Right now we're seeing a reckoning amongst the women of Australia, as they stand up and tell their stories of sexual assault, harassment and abuse. Annie is relieved that, as a nation, we're finally doing something about it, and she wants her story on the record. She wants children and women to not do what she did - suffer in tortured silence.

Now, in her 50s, Annie doesn't know if she'd describe herself as 'happy.' She's content. She has her good days and her bad days, but she still suffers the effects of post-traumatic stress disorder (PTSD). She's still looking over her shoulder. She's still fearful of men.

But she's so thankful women are finally feeling supported enough to tell their stories. She is willing to be a voice to the silent, until they find their own courage to tell their truth.

If you experienced abuse as a child, resources and support are available via Blue Knot Foundation. Visit the website or call 1300 657 380 between 9am–5pm AEDT to speak to a trauma counsellor.

*Name changed for privacy and legal reasons. The subject of this article is known to Mamamia, but has chosen to remain anonymous. The photo used is a stock photo from Getty.