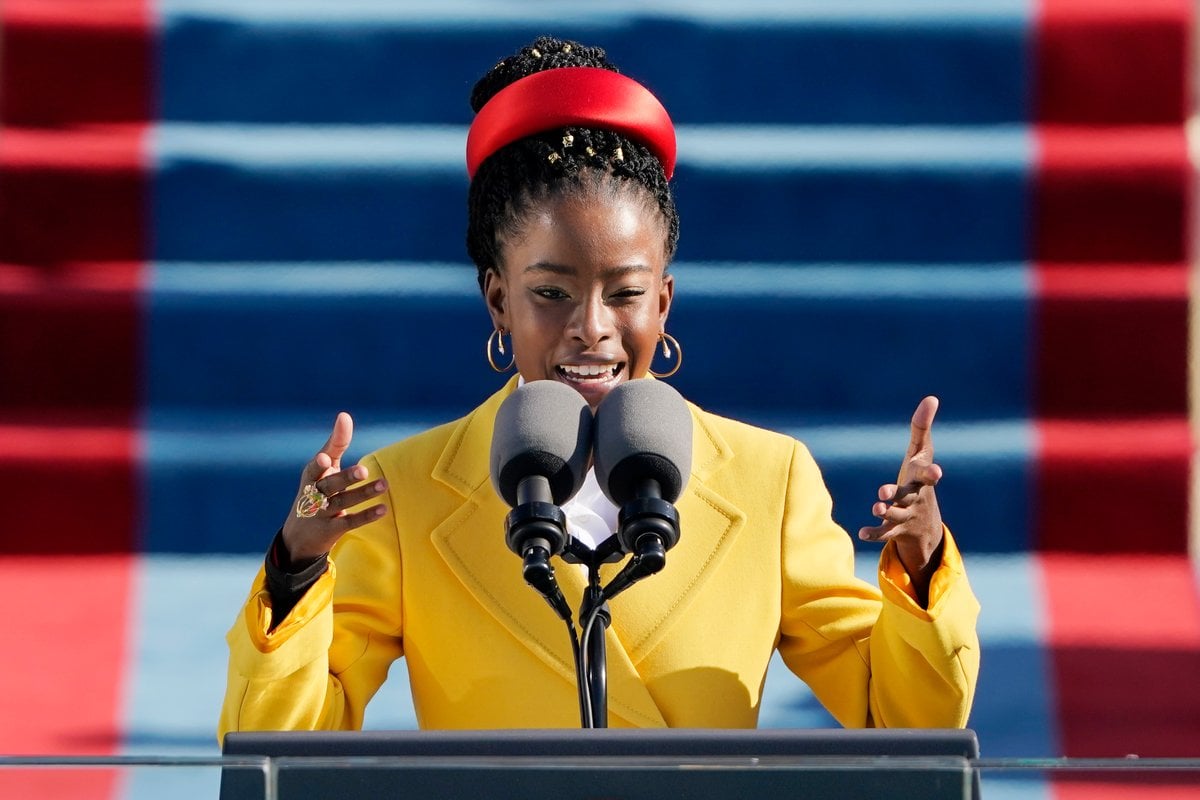 Those are just some of the high-profile women who are fans of 22-year-old poet Amanda Gorman.

Stepping on to the world stage at President Joe Biden's inauguration last month, Amanda Gorman became a household name after she recited two original poems in front of hundreds of millions of people.

At the inauguration, Gorman became the youngest inaugural poet in American history when she read her poem, "The Hills We Climb".

Then on Sunday, Gorman made history again by becoming the first poet to step onto the Super Bowl stage - certainly an unlikely but mighty match.

Watch: Amanda Gorman recites 'Chorus of the Captains' at the Super Bowl. Post continues below.

Planned before she became a sensation at Biden's inauguration, Gorman's reading of her original poem, 'Chorus of the Captains' paid tribute to three Americans - educator Trimaine Davis, nurse manager Suzie Dorner and Marine veteran James Martin - for their heroic contributions during the pandemic.

Here's what you may not know about Amanda Gorman.

Amanda Gorman has a speech impediment.

You wouldn't know from her powerful performances, but Amanda Gorman struggled with a speech impediment growing up. She was unable to pronounce her 'Rs' up until a few years ago.

Recently speaking to Michelle Obama for Time magazine, Gorman said her speech impediment, compounded by the colour of her skin, has caused her to grapple with impostor syndrome several times.

"Speaking in public as a Black girl is already daunting enough, just coming onstage with my dark skin and my hair and my race—that in itself is inviting a type of people that have not often been welcomed or celebrated in the public sphere," she told the former First Lady of the United States.

"Beyond that, as someone with a speech impediment, that impostor syndrome has always been exacerbated because there’s the concern, Is the content of what I’m saying good enough? And then the additional fear, Is the way I’m saying it good enough?"

But while Gorman previously saw it as a weakness, she doesn't anymore - and she's proud to join the pool of other influential people who also have speech impediments, including President Joe Biden.

"Now I really look at it as a strength because going through that process, it made me a writer, for one, because I had to find a form in which I could communicate other than through my mouth," she says. "And two, when I was brave enough to try to take those words from the page onto the stage, I brought with me this understanding of the complexity of sound, pronunciation, emphasis."

Gorman, who is a Harvard graduate, also shared how she combats stage fright before each performance. To ease her nerves, the 22-year-old will repeats a personalised mantra before stepping on to stage each time.

The poem is inspired by Mark Mancina and Lin-Manuel Miranda's song "I Am Moana (Song Of The Ancestors)" in the Disney movie Moana, which has the line: "I am the daughter of the village chief. We are descended from voyagers. Who found their way across the world. They call me."

Gorman's own mantra is: "I’m the daughter of Black writers who are descended from Freedom Fighters who broke their chains and changed the world. They call me."

Amanda Gorman was born in Los Angeles in 1998 and was raised by her single mother, Joan Wicks, who is an English teacher. She has a twin sister, Gabrielle Gorman, who is a graduate of UCLA's School of Film and Television where she concentrated in screenwriting.

Amanda Gorman was raised by her mother, Joan Wicks, a 6th-Grade English teacher. She also has a twin sister, Gabrielle Gorman, who is an activist and filmmaker. pic.twitter.com/lAeAH6hVap

In 2017, Gorman was named the first National Youth Poet Laureate in 2017. She has previously spoken about how her mother's profession in education had a seminal impact on her understanding of language.

"Having a mother as a sixth grade English teacher in an inner city public school gave me an up-close and personal view of how literacy influences young students," Gorman told Studybreaks in 2017. "I realised that education can really be a life-or-death resource. That sounds dramatic, but to kids who grow up in these neighbourhoods, it’s not. It’s reality. School and college is a pathway to get off the streets, to break a cycle...

"My mother worked so hard while raising three kids to get her doctorate and master’s degrees in Education. She inspires me every day to seek higher education not only for myself, but for the other students around me."

As for what the 22-year-old's future holds, Amanda Gorman has said she plans to run for president in 2036, the first year she will be eligible to run - which Hillary Clinton confirmed after the inauguration via Twitter.

Wasn't @TheAmandaGorman’s poem just stunning? She's promised to run for president in 2036 and I for one can't wait. pic.twitter.com/rahEClc6k2

In January, Gorman spoke to Los Angeles Times about what it means to have a woman of colour as Vice President for the first time.

“There’s no denying that a victory for her is a victory for all of us who would like to see ourselves represented as women of colour in office,” she said. “It makes it more imaginable. Once little girls can see it, little girls can be it. Because they can be anything that they want, but that representation to make the dream exist in the first place is huge — even for me.”

Clearly, this is only the start of Gorman's powerful presence on the global stage.