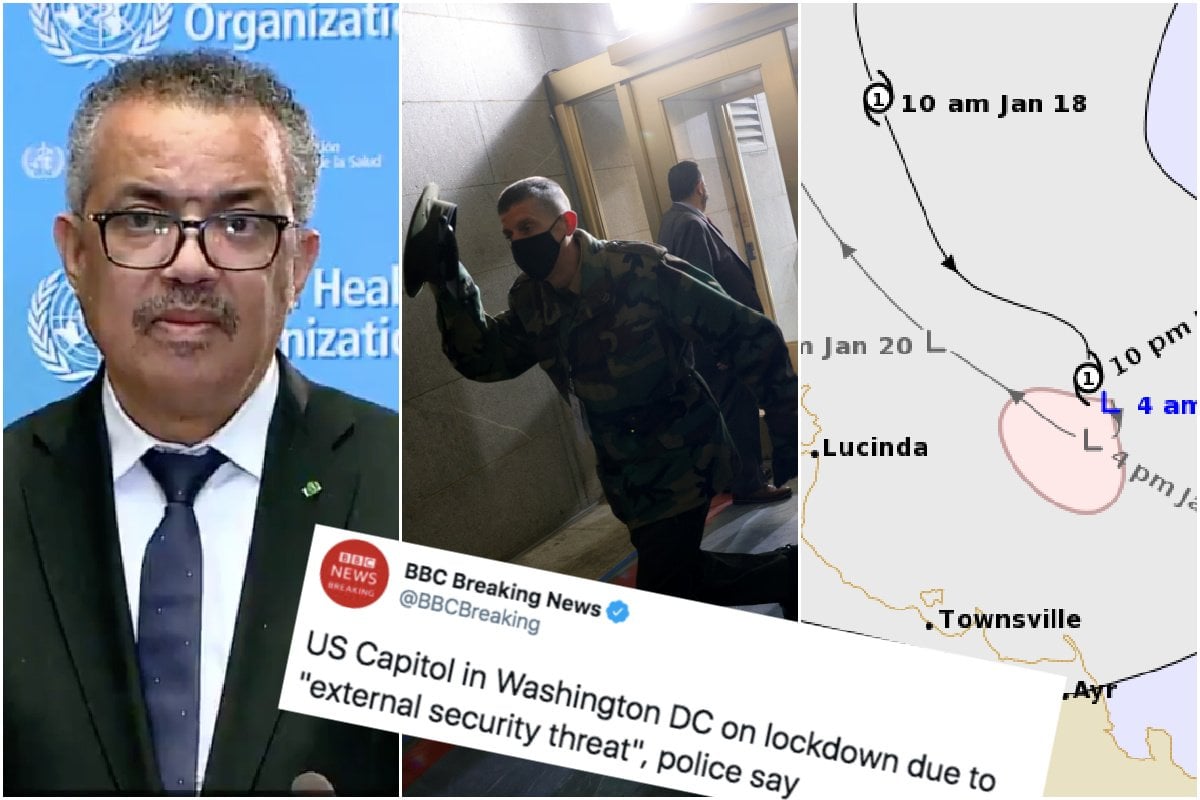 The world is on the brink of "catastrophic moral failure" in sharing COVID-19 vaccines, the head of the World Health Organisation says, urging countries and manufacturers to spread doses more fairly around the world.

WHO chief Tedros Adhanom Ghebreyesus said the prospect of equitable distribution was at "serious risk" just as its COVAX vaccine-sharing scheme aimed to start distributing inoculations next month.

He noted 44 bilateral deals were signed last year and at least 12 have already been signed this year.

"This could delay COVAX deliveries and create exactly the scenario COVAX was designed to avoid, with hoarding, a chaotic market, an uncoordinated response and continued social and economic disruption," he said.

Such a "me-first approach" left the world's poorest and most vulnerable at risk, he said at the opening of the body's annual Executive Board meeting in virtual format.

A delegate from Burkina Faso, on behalf of the African group, expressed concern at the meeting that a few countries had "hoovered up" most of the supplies.

Observers say this board meeting, which lasts until next Tuesday, is one of the most important in the UN health agency's more than 70-year history and could shape its role in global health long after the pandemic ends.

The head of Australia's health department believes it is unlikely international borders will substantially reopen this year, even if most people are vaccinated against coronavirus.

Brendan Murphy downplayed the prospect of a widespread easing of border restrictions, meaning dreams of international travel this year remain on hold.

"The answer is probably no," Professor Murphy told the ABC on Monday.

"Even if we have a lot of the population vaccinated, we don't know whether that will prevent transmission of the virus."

Brendan Murphy has downplayed the prospect of a widespread easing of border restrictions, meaning dreams of international travel this year remain on hold. #TheProjectTV https://t.co/L8mN7XFybl

The government is planning to distribute the Pfizer vaccine as well as the locally produced AstraZeneca jab.

Nobel Prize-winning immunologist Peter Doherty has no major concerns about the Pfizer vaccine.

He also backed the safety of the AstraZeneca vaccine, which he expects will save lives.

"You don't expect there to be any danger in the sort of product they're using and I don't think there's any evidence there has been," Professor Doherty said. "I'd be surprised if the vaccines don't dramatically reduce transmission."

No new locally acquired cases of coronavirus were reported in Australia on Monday.

Participants in a rehearsal for US president-elect Joe Biden's inauguration have been evacuated from the West Front of the Capitol on orders of security officials after a fire in a homeless encampment, officials say.

Those who had gathered for a walk-through, including a military band, were directed to head indoors and moved in the direction of a secure location inside the Capitol complex.

A small fire in Washington DC has triggered a shut down of the US Capitol Building, revealing just how tight security is heading into Inauguration Day.https://t.co/VJhp1Z2vtk

People involved in the rehearsal said security officials yelled "this is not a drill".

Four law enforcement officials told the Associated Press there had been a blaze several blocks away and the rehearsal was evacuated in an abundance of caution.

The Capitol complex and surrounding areas have been locked down after a riot there on January 6.

Thousands of Victorians stranded in Sydney are now able to return home, although parts of the NSW capital remain blacklisted.

Twenty-five of Sydney's 35 local government areas were downgraded from "red" to "orange" zones at 6pm on Monday as part of Victoria's "traffic light" permit system.

The Blue Mountains and Wollongong also moved from red to orange, while 16 local government areas along the NSW-Victoria border changed from orange to green, permitting unrestricted entry.

People travelling from an orange zone still need to apply for a permit online and get tested within 72 hours of their arrival in Victoria, isolating until they receive a negative result.

Victoria notched a 12th consecutive day without a local coronavirus case on Monday, although a tennis player and three staff members tested positive to COVID-19 in hotel quarantine.

Nick Kyrgios has criticised Novak Djokovic after the world No.1 reportedly wrote to Australian Open organisers asking them to ease quarantine restrictions for players.

There are 72 players in hard quarantine and unable to train outside their hotel rooms for 14 days after positive COVID-19 tests on tournament charter flights.

Djokovic reportedly sent Australian Open boss Craig Tiley a letter with six demands he wanted actioned for the players in lockdown in Melbourne.

Kyrgios, ranked 47th in the world, took to Twitter on Monday night to share his opinion on the matter.

"Djokovic is a tool," Kyrgios wrote while sharing a news report.

Kyrgios criticised Djokovic time and again in 2020 for organising the Adria Tour exhibition event in the Balkans, where multiple players including the top-ranked Serbian contracted the virus.

Australians on unemployment support are expected to again receive $40 a day from April when the coronavirus supplement ends.

The JobSeeker payment is currently being boosted by $150 a fortnight but the higher rate is slated to finish on March 31.

Services Australia's website reads: "From 1 April 2021, your payment will change to the normal JobSeeker payment rate for your situation."

According to a payment rate chart on the government agency's website, that means single Australians with no children will receive $565.70 per fortnight.

The federal opposition, welfare and business groups - as well as former Liberal prime minister John Howard - have previously called for the $40-a-day rate to be increased.

A spokeswoman from the Department of Social Services said the coronavirus supplement was a temporary measure. Treasurer Josh Frydenberg has ruled out extending the program.

Cyclone Kimi has weakened into a category one system off far north Queensland and forecasters say it now appears unlikely to cross the coast.

North Queenslanders had earlier been battening down the hatches as the former category two tropical cyclone lurked off the coast.

The Bureau of Meteorology (BOM) said Cyclone Kimi was travelling southeast about 135km north of Townsville about 1am AEST on Tuesday.

Cyclone Kimi has been downgraded to a Tropical Low, but Queensland is far from out of the firing line with the system's erratic behaviour putting authorities on alert. #9Today pic.twitter.com/dYDsRlPvby

But the bureau also said a coastal crossing as a tropical cyclone was becoming unlikely and destructive winds were no longer expected near coastal and island areas.

Kimi was expected to drift towards the south-southeast and become slow moving early on Tuesday off the coast between Hinchinbrook Island and Townsville.

Residents from Innisfail to Bowen, including Townsville, have also been told to prepare for abnormally high tides.

- England has extended the rollout of its COVID vaccine to people over the age of 70, with 3.79 million Brits receiving the vaccine so far.

- The Museum of London will provide a permanent home to a helium-filled balloon depicting President Donald Trump as a nappy-wearing orange baby.

- US prosecutors have charged a Californian man who they allege has been living for three months undetected in a secure area of Chicago's O'Hare International airport.

- A Russian court has sentenced Opposition Leader Alexei Navalny to 30 days in prison on charges of violating the terms of his parole while he was in Germany recovering from a poisoning attempt he says the Kremlin launched.

fedup a month ago

Reply
Upvote
Re: Australia border remaining closed. This is  a good thing it is the main thing that will keep us safe. Before Covid people flitted unnecessarily around the world and it causes the spread of many illnesses. I think the Covid experience might change behaviour of people. Might not be such a bad thing.
anonymous a month ago