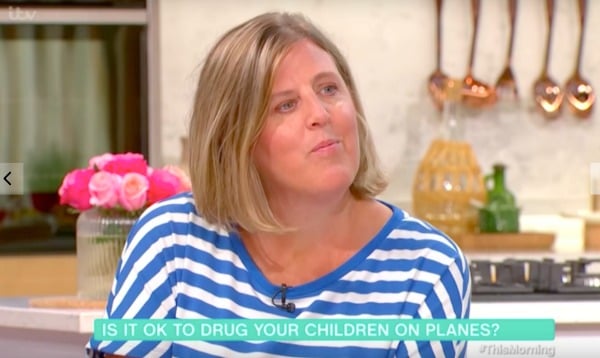 A British mum has received backlash after admitting she sedates her children to keep them calm on long-haul flights.

Mother of four and journalist Shona Sibary, 46, explained on the This Morning television program that prior to embarking on extended plane travel, she chooses to give her children the sedating anti-histamine, Phenergan Elixir. The medication is intended to treat allergies, but is commonly administered by parents travelling with children, as it often causes drowsiness – hence subduing them.

The mum explained that she didn’t view this as ‘drugging’ her kids, but merely helping them to sleep well on the journey – and had taken medical advice to do so.

Dr. Ranj Singh appeared on the show with Sibary, and raised concerns about the potential risks of such medications.

“As a doctor, I would never advise any parent to do that, because technically speaking we shouldn’t,” Dr. Singh said.

“You are essentially relying on the side effect of a medication.” He then suggested that a potential solution could be to not take the long-haul flight if the plane ride is so problematic.

“I am not embarrassed, I just don’t think it is fair when somebody else who has paid an absolute fortune for an economy flight seat,” she said.

“Why should they put up with a screaming child for 15 hours? What I struggle with is this parent-centric attitude that the whole world has to revolve around children. Why should your child take precedent over everyone else? If I had my way they would be in a different cabin altogether, they’d be in the hold sedated!”

Sibary further explained, “I am not doing it for selfish reasons.”

The mother’s perspective outraged many viewers, who felt her actions were akin to child abuse. On both Twitter and Facebook, viewers accused Sibary of bad parenting practice.

"You are relying on what is essentially a side effect of a medication which could be unpredictable, and surely there will be people saying don't go on that extra long-haul flight?", one commented.

Another added, "Its very irresponsible to drug your children on planes."

Many viewers agreed with Dr. Singh's suggestion that alternative plans could be made if Sibary's children found plane travel so traumatic.

"Leave it a few years and try again. Some times you have to sacrifice when having children and this may be one of them," one post said.

Some parents admitted that they use Phenergan in a prescribed form to help with sleep issues, but were outraged that Sibary would use it "just to shut them up".

There were also many comments suggesting Sibary occupies her children better, rather than sedating them. One mother wrote:

"Why not stimulate and engage in activities to do on the flight? Absolutely shocked at this."

Before phenergan, my daughter would vomit 7-10 times on the 40 minute flight from Launceston to Melbourne... sure, I could just never leave Tasmania but how realistic is that? I use it on long car trips too. Motion sickness is no joke. I’m going to keep “drugging” my child.

If you're going to do it, test it first. We had doctor prescribed phenergen for my two yr old daughter's hives to help her get some sleep at night as well as reduce the hives and it sent her batty. She went crazy for about an hr before just zonking out. I'll never give it to her again. If she had that reaction on a plane it would have been truely awful for all parties involved.