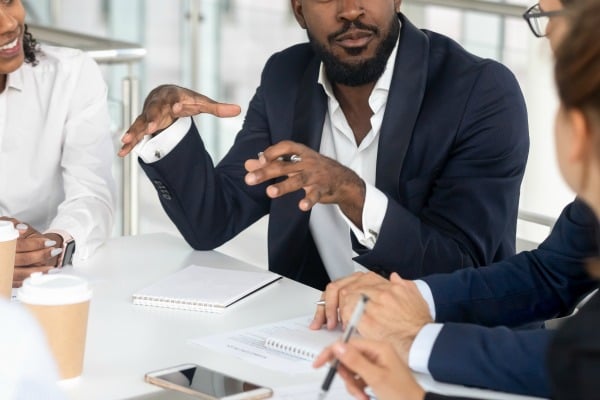 Jack’s* first thought was one of shock.

“Huh? What do you mean my outfit is distracting? What do I even do with that information?” he thought as he sat across from his boss in a feedback meeting.

He’d been pulled aside about a work thing. But the chat ended in a weird interaction about his daily attire in the office.

“You need to be conscious of how your presence in a room can have an effect on other people,” the boss said.

Jack is a pretty ordinary Melbournian 30-year-old. He’s slightly taller than the average bloke, is confident and likeable, and gets on well with his fellow insurance brokers.

There’s no dress code at work, but everyone sticks to a similar vibe; professional and corporate.

“We’re not talking ties, but it’s a collared shirt and a suit pant every day kind of office,” Jack told Mamamia.

Confused by the comment, Jack asked his boss for some examples and was pointed towards his third button. He liked to leave it undone.

“I have a bit of chest hair, but is anyone really getting distracted by a couple of centimetres of chest hair? It made me think ‘am I going crazy?'” Jack explained.

His boss expanded on his point. “It could take away from the message you are trying to convey professionally,” he explained.

Jack didn’t really respond – telling the man, who was only a few years older than him, that he’d “think about it” before leaving the chat perplexed.

“I could understand people getting feedback about dressing too casually, but I fit the mould in terms of corporate attire. So I was thinking, is this valid feedback? Is this what other people are thinking too? Do I need to take this on board, or can I discard this feedback?” he told Mamamia.

His colleagues (both male and female) were equally as shocked, “Really? That’s never crossed my mind [about you],” one of the women said.

Jack saw two choices. Either he ignores the comment and goes on wearing his shirt how he likes, or he does up his third button based on one piece of feedback.

"I took the path of least resistance. That's what I do now, I do up the extra button. Purely because as much as I'd like to say 'Nah, I will do what I want, thanks' I don't want to incite any additional friction," he told Mamamia.

Jack explained he didn't want to rock the boat or "make a thing out of it" so he swallowed his pride and sucked it up.

It's not really a big deal to him. It's now just a running joke amongst his colleagues and a funny story he tells at the pub.

You see, Jack hadn't had this experience before.

For women, it's a daily occurrence. It's built into our psyche as something to expect or at least be aware of. Jack gets that now. He also now gets why women don't call it out: sometimes it's too hard and sometimes it's just not worth it. It's part of the reason why it's just one of those 'things' women put up with.

The day Sarah Hanson Young refused to be slut-shamed. Post continues after video.

"I think it's given me an insight into what women go through, but without the emotion attached... which is such a big part of what females go through," he said.

"More than anything it's given me an insight into the confusion of it. In the sense of, 'how is what I am doing impacting you in any way?'"

The key difference for Jack is that he isn't upset because of it. Because it's not common in his world, or in the world of men.

It's common in ours - in women's lives - but we're not just confused, we're also sick of calling it out.

"I didn't see it before. But suddenly I see it everywhere... I see someone at work and think, 'oh you've got your third button undone,' I am aware of things I'd never even thought of before."

*Name changed. Jack's identity is known to Mamamia but has chosen to remain anonymous for privacy reasons. The feature image used is a stock photo.

I'm sorry, but what is it exactly that "women go through" that this guy now understands?