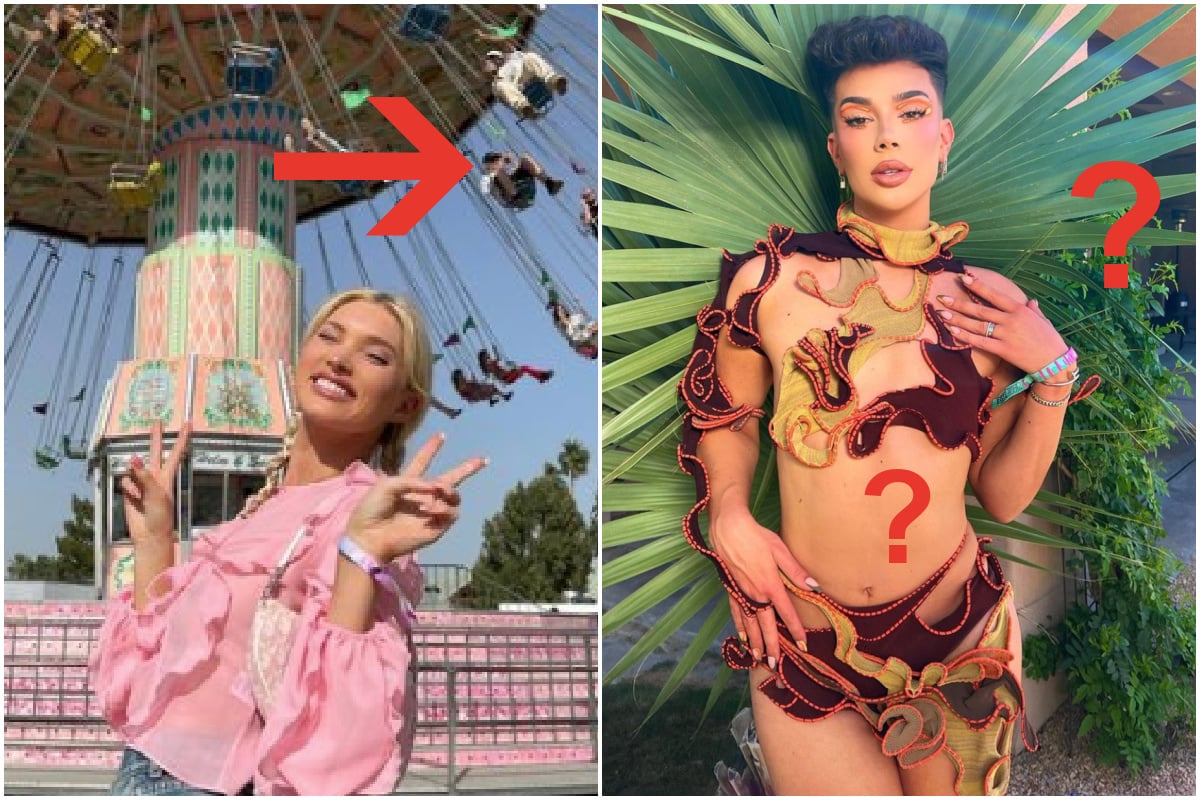 All I've done for several days now is watch strangers get ready for a music festival I don't fully understand.

I'm so confused about precisely all of it.

For example, is there a theme and why is it slightly cowboy? Do they create new landfill specifically for Coachella outfits, and what do they do when it takes up every square inch of the state of California?

It seems that no one is there for the music, they are only there for the content. And imagine being a normal person constantly in the background of everyone's photoshoots?! 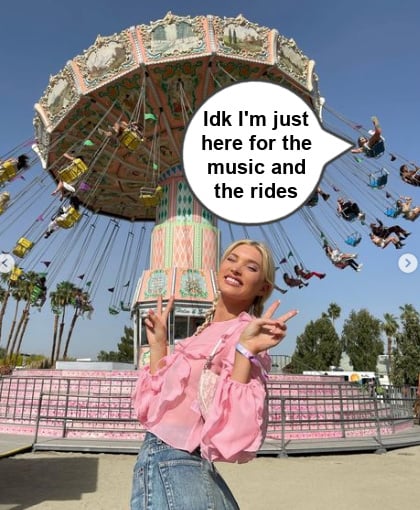 So given my extensive knowledge the frankly sickening number of hours I've spent on TikTok, here are the biggest moments from the Coachella weekend, recapped.

Timothée Chalamet, who I love unconditionally, had a lovely, wholesome time at Coachella.

He wore early 2000s style board shorts that would've been hideous and upsetting on anyone else but somehow made me like him more.

Another video of Timothée Chalamet at #RevolveFestival
(via alanaalovee) pic.twitter.com/mP5uvSD7hq

He did smoke a number of cigarettes which, when paired with the board shorts, made him look like a lad but sweetheart you are forgiven. Because the man was just having the time of his life.

At one point, he was spotted kissing Nigerian model and activist Sarah Talabi, who was then approached for comment by Page Six.

"Everyone is asking me if I was kissing Timothée Chalamet at Coachella, and that is a good question," she said.

"But a great question would be asking our world leaders why the Earth is now losing 1.2 trillion tons of ice each year due to global warming and why climate crisis reform has been completely ineffective. I encourage you to contact your local representatives and ask them that."

Well. That's a brilliant point. Now you say it.

Maybe there is an election in Australia right now. And maybe instead of thinking about it, I've been watching people put colourful gems on their faces for no reason? In order to attend a festival where they film it all on their phones? So that the people watching on their phones wish they were there? In person? To also film it on their phones? 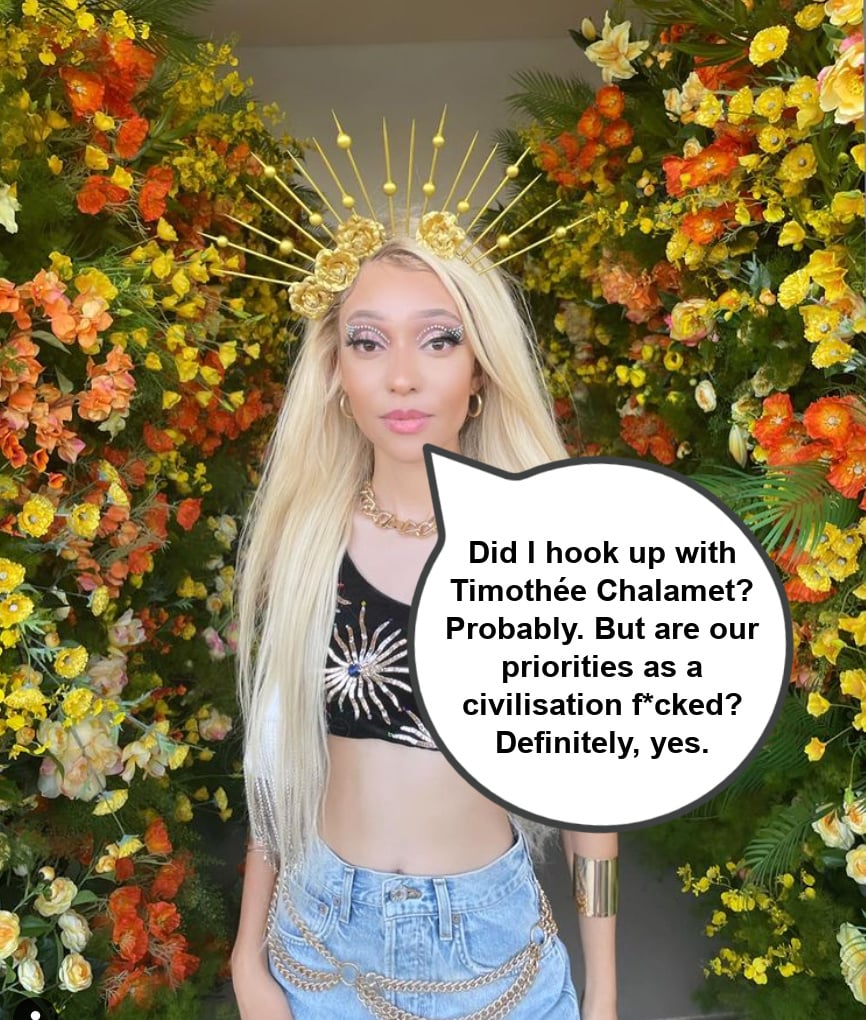 But also did you kiss that glorious small man y/n and was it nice and do you have his number and idk like how did he smell.

There was a fashion misunderstanding.

Or alternatively, as a COVID molecule.

But there seems to have been a misunderstanding.

Because with the arrival of two of the internet's coolest people - Hailey Bieber and Kylie Jenner - there was an immediate vibe shift.

THEY LITERALLY WORE JEANS AND A T-SHIRT.

Imagine dressing as COVID and then realising it wasn't a dress up party omg.

Do you think everyone silently went to the bathroom and washed off their face gems. 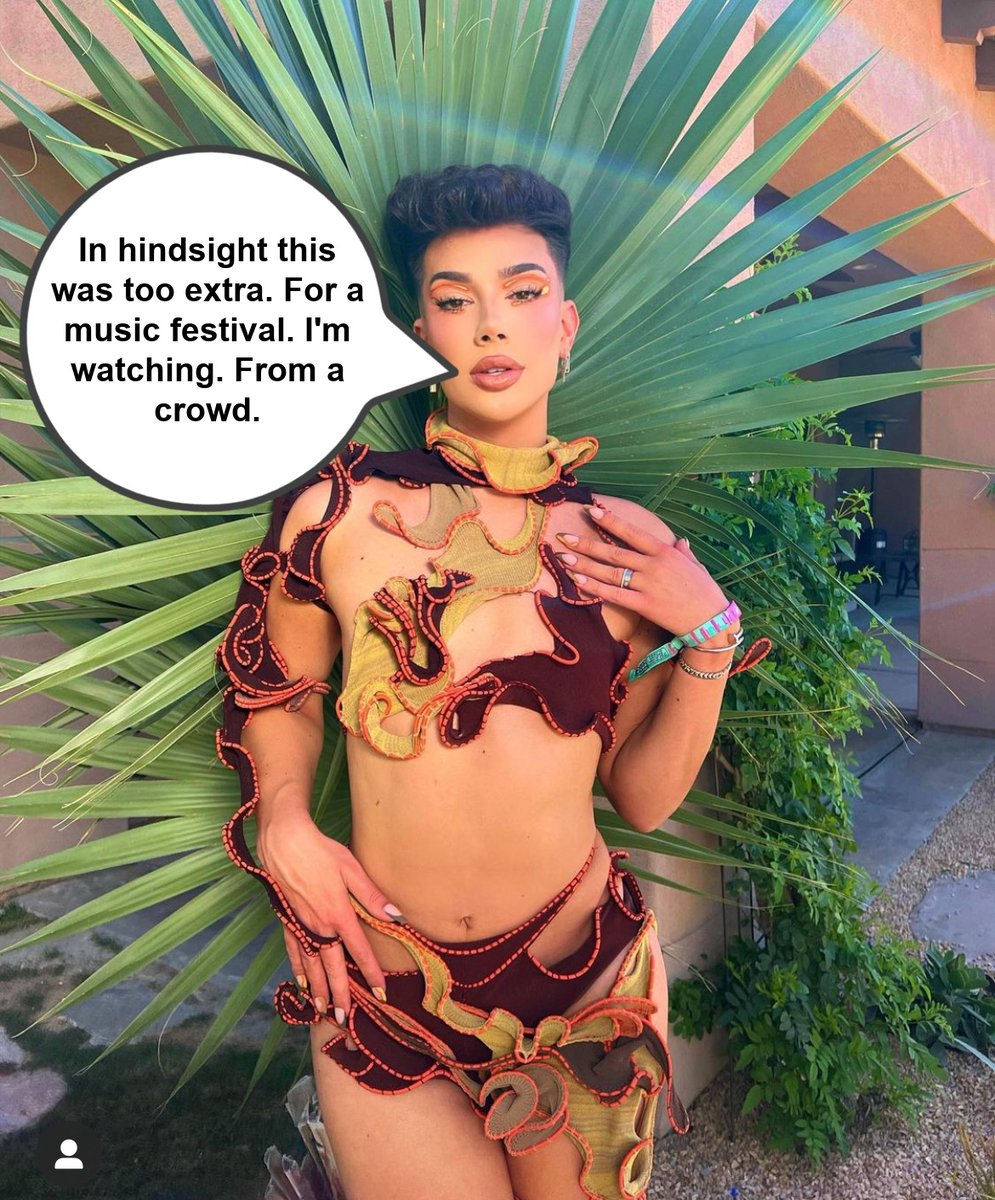 'OK so maybe it was too much.' Image: @jamescharles.

Next year everyone's going to come in jeans and a t-shirt and Kylie will show up as a literal CGI version of herself in an elaborate mermaid costume and everyone will feel ridiculous again.

Harry Styles made people feel things in their genitals.

Okay so. Harry Styles appears to love women (Stevie Nicks, Shania Twain, his fans) in a way that feels deeply respectful, and the fact that that's a novelty needs to be interrogated, but not right now because he's gyrating in sequins.

I feel so many things and none of them I can explain.

He performed his viral song 'As It Was' live for the first time, as well as two new songs - including one about how s**t boyfriends are, which yes. They are Harry. They don't wear nearly enough sequins and they never sing live with Shania Twain.

Straight after singing the masterpiece that is One Direction's 'What Makes You Beautiful', Styles invited Shania Twain on stage to perform 'Man! I Feel Like a Woman' and 'You're Still the One'.

On stage, he explained, "in the car with my mother as a child, this lady taught me to sing."

You're still a child but do go on.

"She also taught me that men are trash."

Everyone except you and Timothee. Who's just over there.

Harry pls. How did you get so good with words.

It truly was a holy weekend.

Oh no. It's the influencers. They're upset.

You see, one of the most exclusive Coachella events, Revolve Festival, didn't go quite as planned. And by that I mean thousands of people got stranded in the desert with no water and abandoned it altogether.

A lot of very, very attractive people turned up to attend the invite-only, influencer event. There was only one problem: everything.

In order to get to the festival, they had to turn up to an empty parking lot and get a shuttle bus. But there appears to have been a problem with the shuttles (????) and so a number of people with huge Instagram and TikTok followings posted about the SHEER INDIGNITY of being expected to WAIT IN A LINE like a PEASANT.

Joseph Kapsch, a reporter for LA Mag, tweeted on Sunday that influencers were "stranded in the dirt with no water, under the hot sun for HOURS, waiting for buses that aren't coming."

One person on the ground told Kapsch there were, "alleged fights, screaming, everyone is dizzy."

In what Kapsch called an 'only in LA moment,' "security had crowds of influencers yelling how 'important they were and why they deserved the first seat'."

"One of the guards said, 'I don't know who the F these people are. I don't who is actually important and who is lying or if any of them are important'."

If that isn't the quote of the decade I don't know what is.

The event still went ahead, with celebrity guests like Kendall Jenner and Kim Kardashian, who I'm guessing didn't have to get the shuttle.

Thankfully, we have another weekend of this absolute chaos to come. We can only hope the influencers have recovered from the trauma of having to wait in line.

Reply
Upvote
They're all so very thirsty.