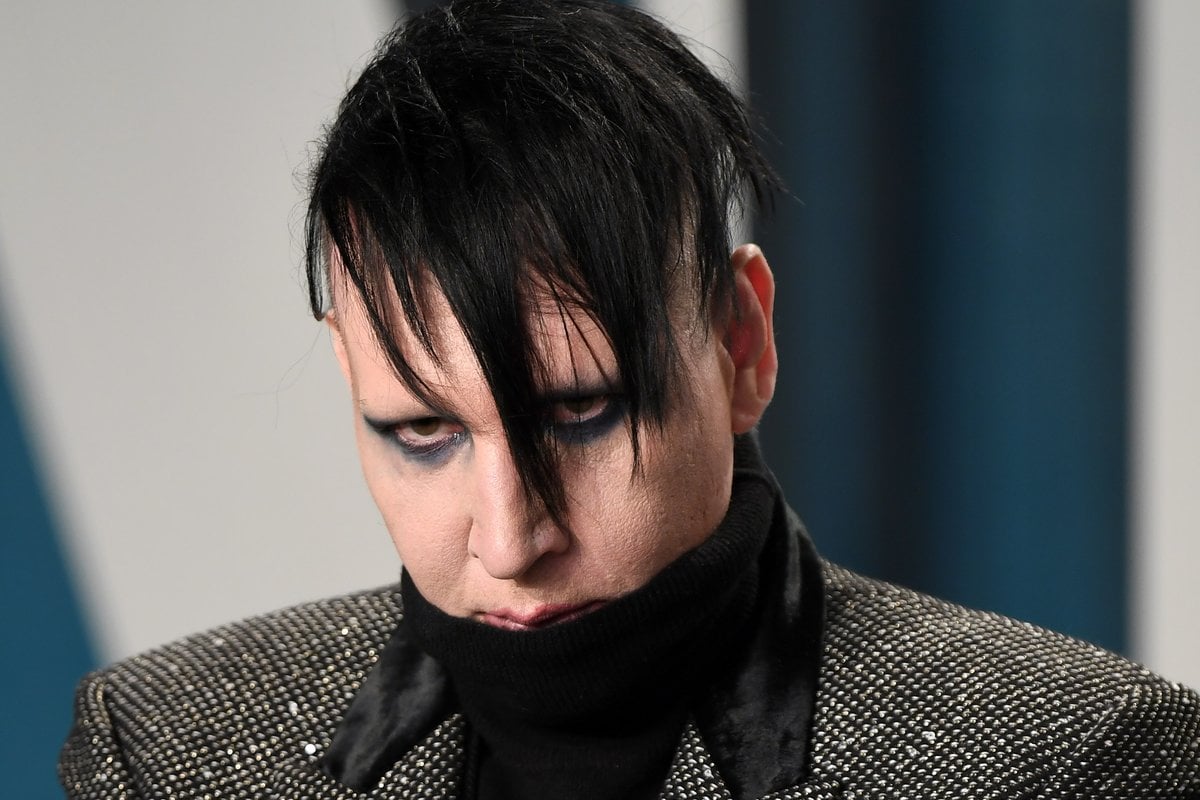 This post deals with domestic violence, sexual assault, and self harm. It may be triggering for some readers.

This week, Evan Rachel Wood accused Marilyn Manson of being a "dangerous man" who subjected her to years of abuse.

The Westworld actor, who was 18 years old when she first met Manson, dated the industrial metal musician for several years. When their relationship began, Manson was 36 years old.

"The name of my abuser is Brian Warner, also known to the world as Marilyn Manson," Wood, now 33, shared on Instagram.

Watch: Evan Rachel Wood spoke about standing up to domestic violence in 2019. Post continues below.

"He started grooming me when I was a teenager and horrifically abused me for years. I was brainwashed and manipulated into submission," she continued.

"I am done living in fear of retaliation, slander, or blackmail. I am here to expose this dangerous man and call out the many industries that have enabled him, before he ruins any more lives.

Afterwards, Wood shared the testimonies of at least four other women who reported allegations of rape, intimidation, drugging, violence, and psychological abuse by Manson.

"He was very skilled at gaslighting his inner circle," she shared on Instagram.

"I'd witness him inflict his psychological abuse on everyone he employed, everyone he dated. He would dictate the perimeters of our reality. Horrifying, deranged behaviour and insane scenarios became normalised. He was extremely interested in mind control, torture tactics and spy devices to gather information for blackmailing and manipulation."

Another woman, model Sarah McNeilly, shared that she suffered from PTSD following her relationship with the musician.

"I was emotionally abused, terrorised and scarred," she shared. "I was locked in rooms when I was 'bad', sometimes forced to listen to him entertaining other women. [I was] kept away from certain friends or if I didn’t, he would threaten to come after them. I was told stories of others who tried to tell their story and their pets ended up dead."

Another woman, known as the artist SourGirrrl, accused Manson of rape.

"He would tie me up for the first of many times and rape me. I sobbed on the floor in the hotel and when I looked at him, he was smiling," she said in a statement.

"He told me I wasn't allowed to wear pants. He would throw objects at me like glass. He could cut me during sex. He called me crazy. He called me autistic. He would make fun of my race. He destroyed my belongings."

Read more: Evan Rachel Wood and four other women have accused Marilyn Manson of "horrific abuse". Here are their stories.

In light of the allegations, singer Phoebe Bridgers shared her own experience with Manson on Twitter, adding that she had visited Manson's home with some friends when she was a teenager.

"I stand with everyone who came forward," she continued.

Afterwards, the 26-year-old alleged that Manson's associates knew about the alleged abuse.

"The label knew, management knew, the band knew. Distancing themselves now, pretending to be shocked and horrified is f**king pathetic," she alleged.

I went to Marilyn Manson’s house when I was a teenager with some friends. I was a big fan. He referred to a room in his house as the “r*pe room”, I thought it was just his horrible frat boy sense of humor. I stopped being a fan.

I stand with everyone who came forward.

The label knew, management knew, the band knew. Distancing themselves now, pretending to be shocked and horrified is fucking pathetic.

"Obviously, my art and my life have long been magnets for controversy, but these recent claims about me are horrible distortions of reality," he wrote in an Instagram post.

"My intimate relationships have always been entirely consensual with like-minded partners. Regardless of how — and why — others are now choosing to misrepresent the past, that is the truth."

Afterwards, reports emerged police had swarmed Manson's Los Angeles home to conduct a welfare check after a friend called "concerned for his wellbeing." (A rep for the singer later confirmed that Manson is fine.)

According to TMZ, a witness outside the property told police they "heard someone inside shouting that they wanted to leave".

For many, however, the allegations against Marilyn Manson didn't come as a surprise.

In fact, Manson's alleged behaviour has been hiding in plain sight for years.

In recent years, Evan Rachel Wood has alleged abuse by an ex-partner whom she kept anonymous.

While she didn't name anyone at the time, Evan shared that the man who abused her began grooming her when she was 18 years old. (As mentioned earlier, Wood met Manson at 18. They later went public with their relationship when Wood was 19.)

In 2018, Wood testified before the United States House Judiciary Subcommittee on Crime, Terrorism, Homeland Security and Investigations as a domestic violence and rape survivor in support of the Sexual Assault Survivors' Bill of Rights Act.

"My experience with domestic violence was this," she said. "Toxic mental, physical, and sexual abuse, which started slowly, but escalated over time, including threats against my life, severe gaslighting and brainwashing, waking up to the man that claimed to love me raping what he believed to be my unconscious body, and the worst part, sick rituals of binding me up by my hands and feet to be mentally and physically tortured until my abuser felt I had 'proven my love for them,'" she continued.

"In this moment, while I was tied up and being beaten, and being told unspeakable things, I truly felt like I could die, not just because my abuser said to me, 'I could kill you right now,' but because in that moment I felt like I left my body, and I was too afraid to run."

In 2019, Wood testified in support of the Phoenix Act, which extends the statute of limitations for survivors of domestic violence. 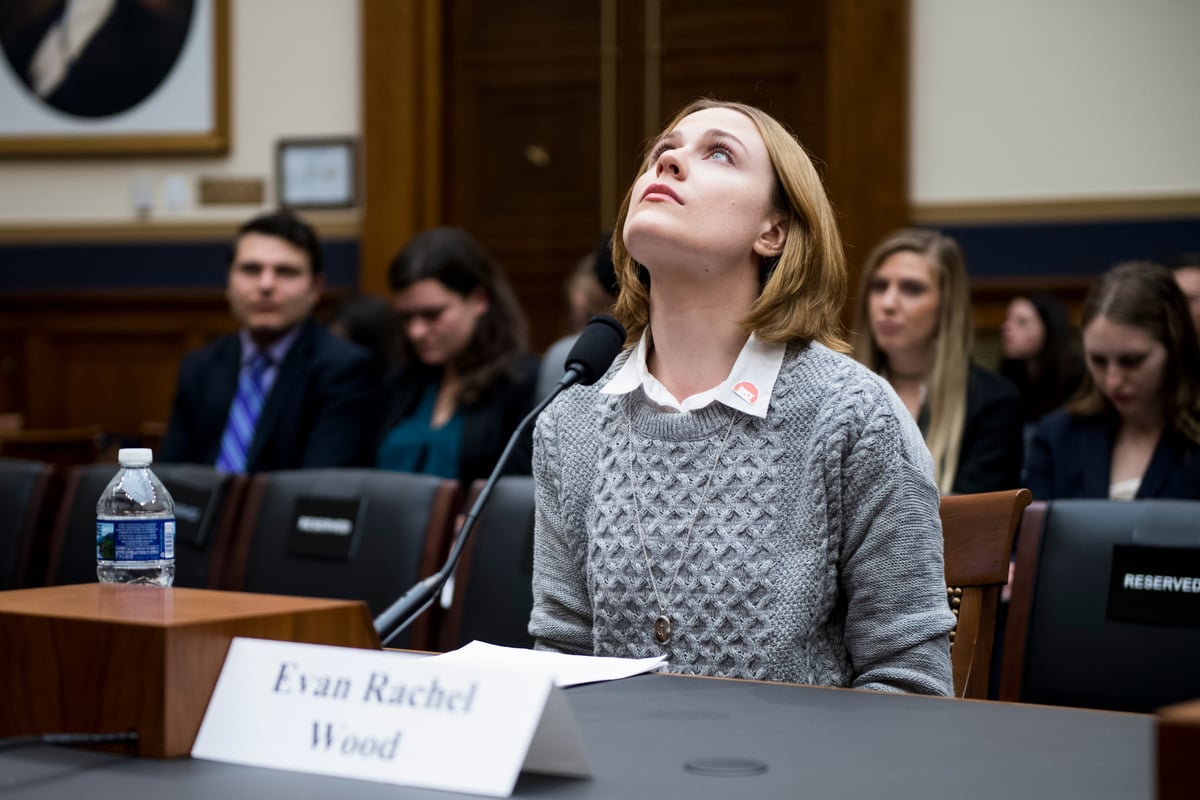 During her testimony, Wood described being both physically and psychologically abused when she was 18 years old.

The following year, Manson cut short an interview with Metal Hammer after the publication questioned the singer about Wood's testimony.

"Personal testimony is just that, and we think it’s inappropriate to comment on that," Manson's team later said in a statement.

"Unfortunately, we live in a time where people believe what they read on the Internet, and feel free to say what they want with no actual evidence. The effects can be catastrophic and promoting non fact based information is wholly irresponsible."

But off-stage, Manson's behaviour is even more concerning.

In his 1998 memoir, Manson described multiple sexual encounters, sharing how he tricked girls into drinking tequila disguised as beer until they passed out, and making rape threats in anonymous phone calls.

Then, in an interview with Spin in 2009, Manson spoke about his split from Evan Rachel Wood, sharing that he had called Wood 158 times while self-harming, before blaming her for it. 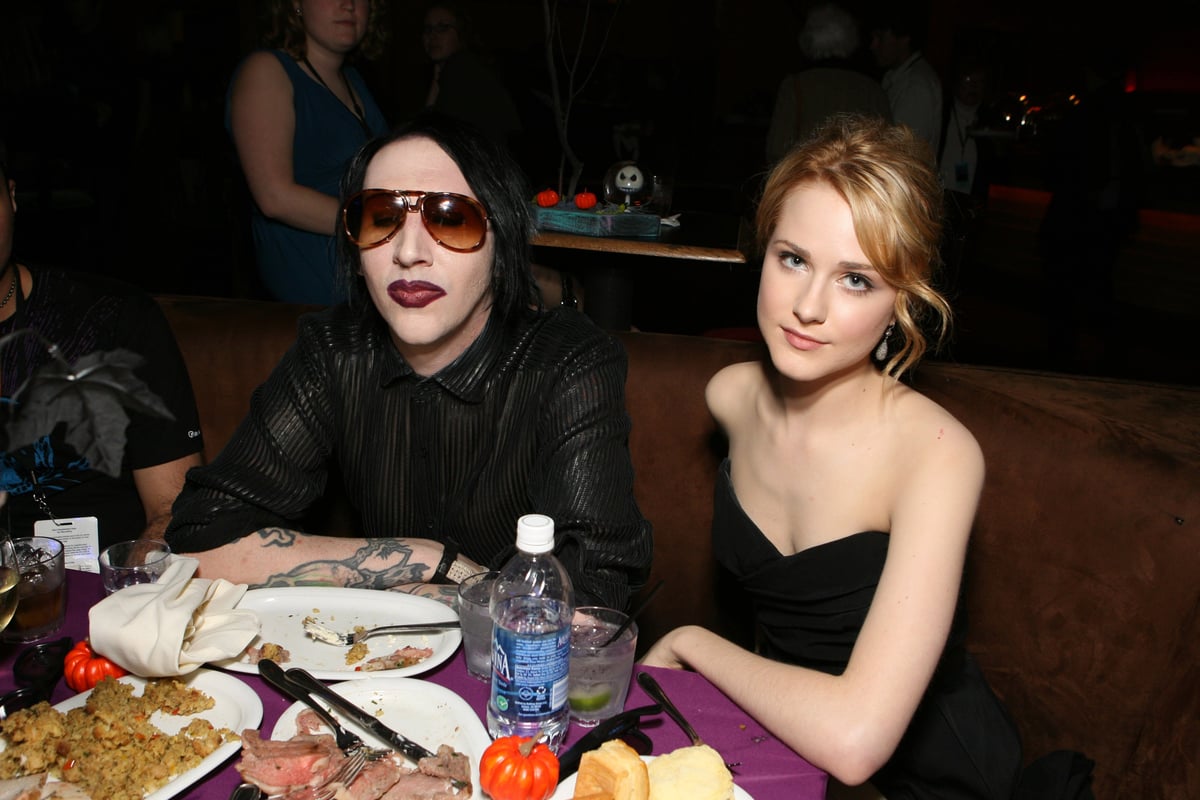 "I wanted to show her the pain she put me through. It was like, 'I want you to physically see what you've done,'" Manson said.

He added: "I have fantasies every day about smashing her skull in with a sledgehammer."

When Manson detailed his violent fantasies, there should have been concerns for Wood's safety. As Patricia Arquette tweeted in 2009: "Marilyn Manson cutting himself 158 times when he called Evan Rachel Wood after [their] break up it’s not [love], it’s abuse."

But at the time, many outlets simply brushed the comments off as part of Manson's theatrics.

"The comments in Spin where Manson had a fantasy of using a sledgehammer on Evan and he cut himself 158 times was obviously a theatrical rock star interview promoting a new record, and not a factual account," Manson's team told Metal Hammer.

"The fact that Evan and Manson got engaged six months after this interview would indicate that no one took this story literally."

There have also been allegations of abuse filed against Manson in the past.

In 2018, a police report was filed against Manson for unspecified sex crimes. Months later, however, the case was declined by the Los Angeles district attorney due to an "absence of corroboration".

Now, in light of this week's allegations against Manson, the singer's label, Loma Vista Recordings, have dropped him.

But despite the swift move from Loma Vista Recordings, it's galling to see how long the music industry has clearly ignored Marilyn Manson's misogynist and, frankly, concerning behaviour.

Manson's alleged behaviour was an open secret in the music industry. In fact, Evan Rachel Wood told us everything we needed to know a long time ago.

But routinely, the music industry has played it off as part of his shock-rocker antics. As another part of his elaborate, button pushing act.

This post was originally published on February 4, 2021, and updated with new information on February 5, 2021.