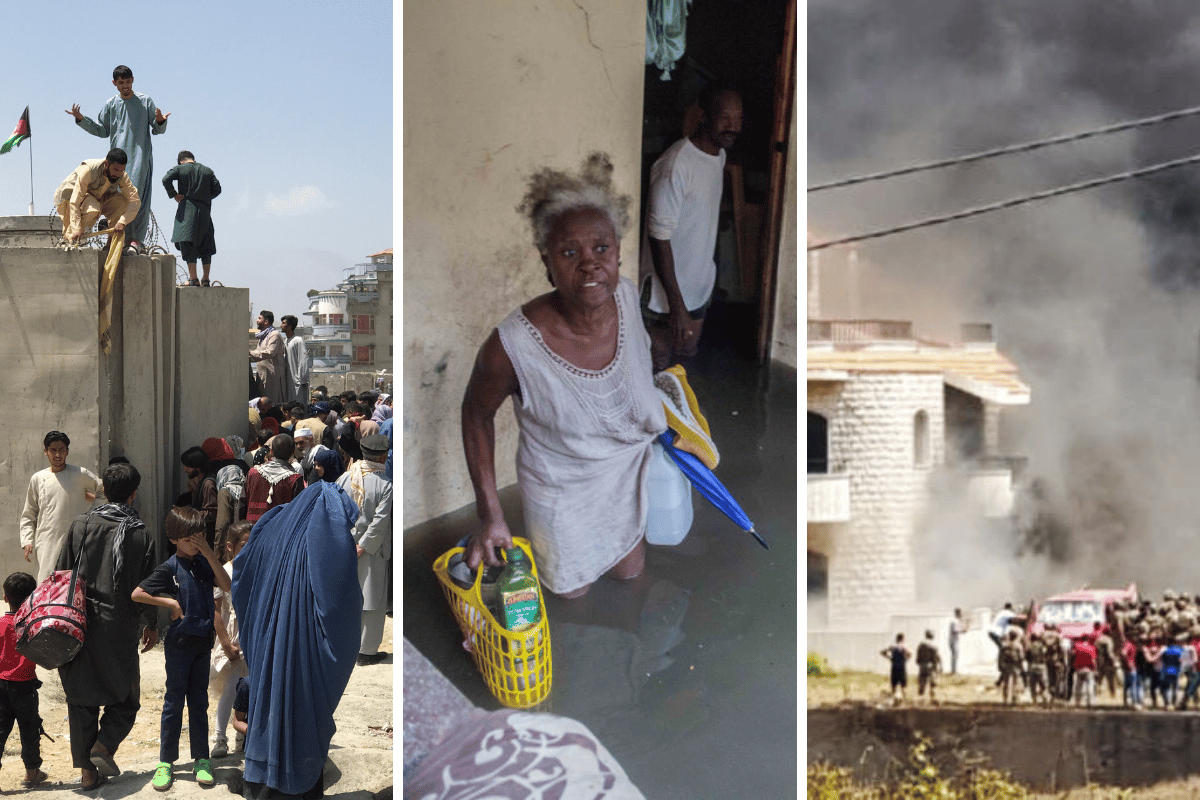 It's been a particularly devastating news week.

In a time where we're all still dealing with a global pandemic, people are being displaced from their homes, having to flee to safety and caught up in violence, as crises unfold around the world.

Images of men, women and children desperately trying to flee Afghanistan fill our feeds, after the Taliban seized control of the country in just over a week.

Meanwhile in Haiti, many are in need of food, shelter and medical aid after a 7.2-magnitude earthquake struck the country on Saturday, damaging thousands of buildings, killing at least 1,941 people and injuring more than 9,900 others.

The country, which is still recovering from another major earthquake 11 years ago, was also hit by a tropical storm on Monday.

Lebanon has also been dealing with its own humanitarian crisis. Just this week, 28 people were killed and another 79 injured when a fuel tank exploded in Lebanon’s northern region of Akkar.

It comes almost a year after the devastating explosion in Lebanon’s capital city of Beirut on August 4, 2020. The country is also dealing with a fuel crisis, which has seen power plants, hospitals and water pumping stations close and left many without electricity and clean water.

So if you, like many of us, have been wondering what you can do to help in these times, here are just some of the ways we can support communities in need right now.

How can I help people in Afghanistan?

CARE Australia are one of the first Aussie charities to dedicate a fundraising appeal to Afghanistan. They are planning to meet the needs of displaced Afghan families, as well as the local economy and livelihoods of host communities, and will provide hygiene kits to prevent the risk of COVID-19 transmission.

You can donate to CARE Australia here.

Women for Women International is a nonprofit humanitarian organisation that provides support to female survivors of war. On Twitter, the organisation said they are collecting donations to help women find safe places to meet and stay connected.

You can donate to Women for Women International here.

Afghanaid is supporting families and providing emergency assistance to men, women and children affected by the conflict.

You can donate to Afghanaid here.

The UN Refugee Agency is responding to the crisis by supplying emergency shelter, food, health, water, sanitation support and cash assistance. But stocks are running low.

Afghan Women and Children and Jalala foundation have teamed up to protect women and children fighting to survive after decades of war.

You can donate to the Afghan Women and Children foundation and Jalala Foundation here.

The ICRC are "determined to stand by the Afghan people and help men, women and children cope with the unfolding situation," the director-general said in a statement.

Since the start of August, over 4,000 people wounded by weapons have been treated at 15 ICRC-supported health facilities.

You can donate to the International Committee of the Red Cross here.

The humanitarian organisation provides aid to displaced families where they can, supplying necessary items like clothes, blankets and kitchen items.

Aside from donations, you can write to your local MP calling for the Australian government to accept Afghan refugees and support those who are already in Australia.

In an article published in the Sydney Morning Herald, Arif Hussein, a human rights lawyer with the Refugee Advice and Casework Service and Zaki Haidari, a refugee from Afghanistan, said Australia could help by implementing a one-off humanitarian intake of vulnerable Afghans.

"Especially minority groups such as the Hazaras and women and children who have been displaced by the war and are seeking refuge on the streets of Kabul," they wrote.

They also called for the government to grant permanent protection to Afghan refugees who are currently on temporary protection visas. This would allow "them to finally restart their lives without the prospect of being returned to Afghanistan".

The Refugee Advice & Casework Service have provided a helpful template for you to email to your local MP.

Mamamia's news podcast The Quicky speaks to two experts to find out how the situation deteriorated so quickly in Afghanistan. Post continues below.

How can I help people in Haiti?

The non-profit organisation is working on the ground in Haiti and has developed short- and long-term responses to help the community. They provide wound care and other essential services like clean water to the community.

You can donate to Hope for Haiti here.

CARE was already working near the epicentre of the earthquake and have distributed tents, water and basic relief items to thousands of people who have been displaced.

You can donate to CARE Australia here.

UNICEF and their team are working on the ground to provide urgent aid to children and families in need.

You can donate to UNICEF here.

Save the Children are collecting donations for their Children’s Emergency Fund which allows them to reach children caught up in crises like in Haiti and Afghanistan.

How can I help people in Lebanon?

Australian-Lebanese model Jessica Kahawaty has set up an online fundraiser to support those struggling in Lebanon. The funds will be distributed to NGOs, families and students and will go towards providing food and clean water to those who need it.

UNHCR are responding to the crisis by supplying emergency shelter materials, including plastic sheeting, large tents and mattresses to those in need.

Save the Children are collecting funds for their Lebanon Crisis Relief Fund to provide families with essential items and psychological support for children.

Do you know any other ways we can support these communities in need? Share them with us in the comments below.