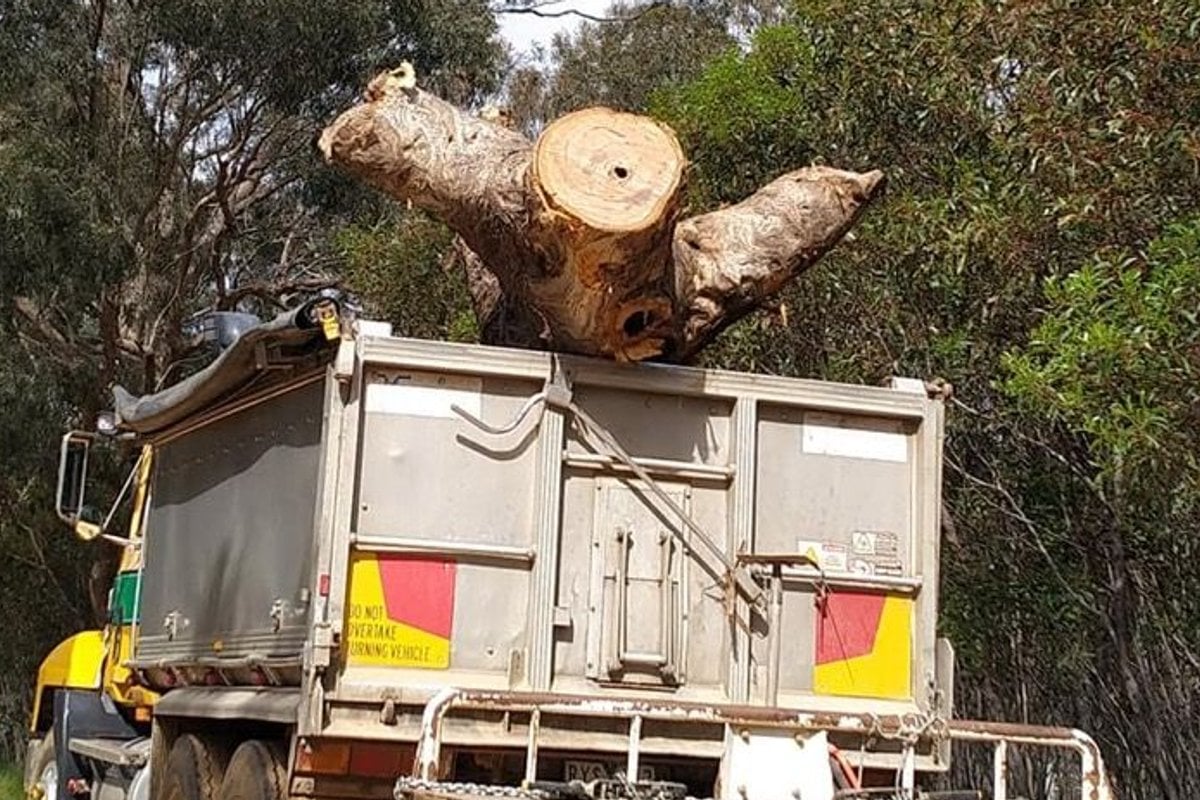 On Monday, chainsawed pieces of a once-towering Yellow Box eucalypt tree were loaded into the back of a truck in western Victoria.

To the state government, that tree represented an obstacle to its new Western Highway, which is currently under construction between Ballarat and Stawell.

To the Djab Wurrung traditional owners, it represented a connection to their land, to their ancestors and ancient songlines.

Watch: "I'm tired of begging and asking for our humanity": Indigenous Lives Matter.

This sacred 'Directions Tree' was felled on Monday, despite the best efforts of protestors who have spent years trying to save a corridor of more than 200 culturally significant trees from the $672 million highway duplication project.

News of Monday's events drew an outpouring of grief from a number of Indigenous people, activists and allies.

"I can feel the chainsaws tearing through my heart, my spirit, my DjapWurrung body is in pain," tweeted Sissy Austin, a Djab Wurrung woman and member of First Peoples' Assembly of Victoria.

"Today I laid on the floor and cried. Cried for our mother, DjapWurrung Country."

So how did this happen? And how has the government responded?

What is the significance of the trees?

The contested area falls in a 12.5 kilometre section of the new highway between Buangor and Ararat.

That land is of particular significance to Djab Wurrung women, as it is home to several Birthing Trees, including one that is more than 800 years old. According to estimates, women have delivered babies in these sacred hollow-trunk trees for 50 generations.

So if you liked the Avatar film, maybe you’d appreciate how it feels when your sacred ancestor trees are torn down by the very government who want to Treaty with us. Absolutely gutted and feel the pain of our ancestors right now 😞 pic.twitter.com/sWt3k36jb3

Speaking to Sydney Criminal Lawyers last year, Djab Wurrung man Zellanach Djab Mara explained: "After a birth, the father would have the placenta and the mother would have the seed from the bush tucker. They would go and plant a tree, which is called a Directions Tree.

"That tree would then represent that baby. And that baby would grow in conjunction with that tree. So, that’s there for that child to go back to and reflect on their life."

So, why build a highway there?

The Daniel Andrews Labor government has promised that the Western Highway upgrade will get motorists to their destination "sooner and safer".

"More than 6000 vehicles travel the Western Highway west of Ballarat each day, including 1500 trucks. This traffic is expected to double by 2025," Major Road Projects Victoria states.

"There have been more than 100 crashes and 11 fatalities on the Western Highway between Ballarat and Stawell in recent years. It is vital for the safety of the community that this upgrade is completed."

It argues that the current plan for the highway has undergone an extensive public consultation process and is the "most environmentally and culturally respectful option".

How has the dispute unfolded?

A group of traditional owners established the Djab Wurrung Heritage Protection Embassy at the highway construction site in June 2018 to protect their sacred country from being razed.

Their presence, and a series of legal challenges, managed to halt construction last year.

However, in September 2019, the Andrews government reached an agreement with the Eastern Maar Aboriginal Corporation (the registered Indigenous organisation for the area) to proceed, by altering the plan so that 15 culturally significant trees would be spared.

According to the government, the tree felled on Monday was not one of those protected under the agreement.

But the Djab Wurrung Heritage Protection Embassy — which is independent of Eastern Maar — has asserted that the Yellow Box was, nonetheless, a sacred Directions Tree and ought to have been saved.

mounted police cordon for captain cook. contempt and destruction for #DjabWurrung. it's still 1788 in this fucking colony pic.twitter.com/09VgX14713

...and then I was reminded that we don’t matter to the colony. pic.twitter.com/rJrt0y6AEj

Protestors swarmed on the site this week in the hopes of halting further destruction. But Victoria Police followed, arresting 60 people by Tuesday afternoon.

Footage reportedly taken at the site on Monday, captures protestors being pulled to the ground by groups of uniformed police.

Construction is due to continue.

Reply
Upvote
This tree was important to the  Djab Wurrung people because it's part of their living culture. It's not some artifact of the past, it's a place of spiritual significance to current  Djab Wurrung people, it's the the past, the present and the future. That is what non-Indigenous Australians need to get their heads around if they want to understand why this causes so much hurt and why it's unacceptable to cut it down.
G
guest2 2 years ago

Reply
Upvote
5 upvotes
@laura__palmer From what I have read of the matter (from the Victorian Govt),12 families make up the Djab Wurrung people and they were the ones consulted. A list of 250 protected trees was agreed upon by both parties and the trees now the subject of this dispute were not on that list.   Surely, if the tree had been that significant to the Djab Wurrung people, it would have been included in the protected trees?
C
cat 2 years ago

Reply
Upvote
@guest2 so you think people are getting arrested just for the fun of it?
G
guest2 2 years ago

Reply
Upvote
2 upvotes
@cat Those arrested are from a different activist group not associated with the Eastern Maar Aboriginal Corporation with whom the agreement was made by the Government.
L
laura__palmer 2 years ago

Reply
Upvote
@guest2 That has nothing to do with my comment. If you want to understand why people in the community are upset over this tree, that is what you need to get your head around. There are members of the group who do not agree that this tree should have been cut down. Aboriginal people aren't all one hive mind who agree on everything.
C
cat 2 years ago

Reply
Upvote
2 upvotes
Why on earth could the highway not go around? 12.5km is not that far, I’m positive highways have taken bigger diversions for far less
G
guest2 2 years ago

Reply
Upvote
3 upvotes
@cat The tree had not been included in the agreement between the Government and the Eastern Maar Aboriginal Corporation, so at this stage of the project it may well be too late for any change of plans.
C
cat 2 years ago

Reply
Upvote
@guest2 they should never have planned a highway that was going to require the removal of sacred trees, they could and should have avoided the whole issue from the beginning.
G
guest2 2 years ago

Reply
Upvote
1 upvotes
@cat Representatives  from the  Eastern Maar Aboriginal Corporation issued a statement regarding the fiddleback tree removal, 'that despite its age and majesty, extensive reassessments did not reveal any characteristics consistent with cultural modification.   It did not appear to have been altered by our peoples for usage in our cultural traditions'.  Major Roads Projects Victoria have said that the 5 large trees, including the birthing tree will not be removed.
The highway project went through an exhaustive process and was approved by the relevant Traditional Owner Groups (an independent environmental process), the Supreme Court and the Victorian Ombudsman (who reviewed the approval process).   There appears to be bipartisan approval for the project and respectful of the cultural values of he traditional owners of that area.
C
cat 2 years ago

Reply
Upvote
@guest2 yes I’ve also read the government press releases. They don’t mention that the assessment was that these trees weren’t ‘as’ culturally significant, not that they weren’t culturally significant. That the laws only require the planning groups to consult with one group of owners, not all the families in the area. That even the group that did sign off in February had wanted to protect these trees, but were beaten down by negotiators with far more money and power than they had, and had to sign the agreement to save the other trees. That members of the local indigenous groups have been camped next to these trees for two years to protect them. Or that that guarantee for the 5 large trees was that they wouldn’t be removed in the next fortnight if workers were allowed to keep working, a ridiculous ploy that was thrown out when the Supreme Court put a 3 week injunction in place.
News
General
Opinion
True Crime
Politics
Sport
Explainer
Entertainment
Celebrity
Reality TV
Movies
TV
Books
Rogue
Royal
Lifestyle
Beauty
Fashion
Weddings
Home
Wellness
Health
Fitness
Travel
Food
Parents
Before The Bump
Pregnancy
Baby
Kids
Teens
School
Parent Opinion
Work & Money
Money
Finance
Career
Lady Startup
Relationships
Sex
Dating
Separation
Friendship
Family
Real Life
Couples