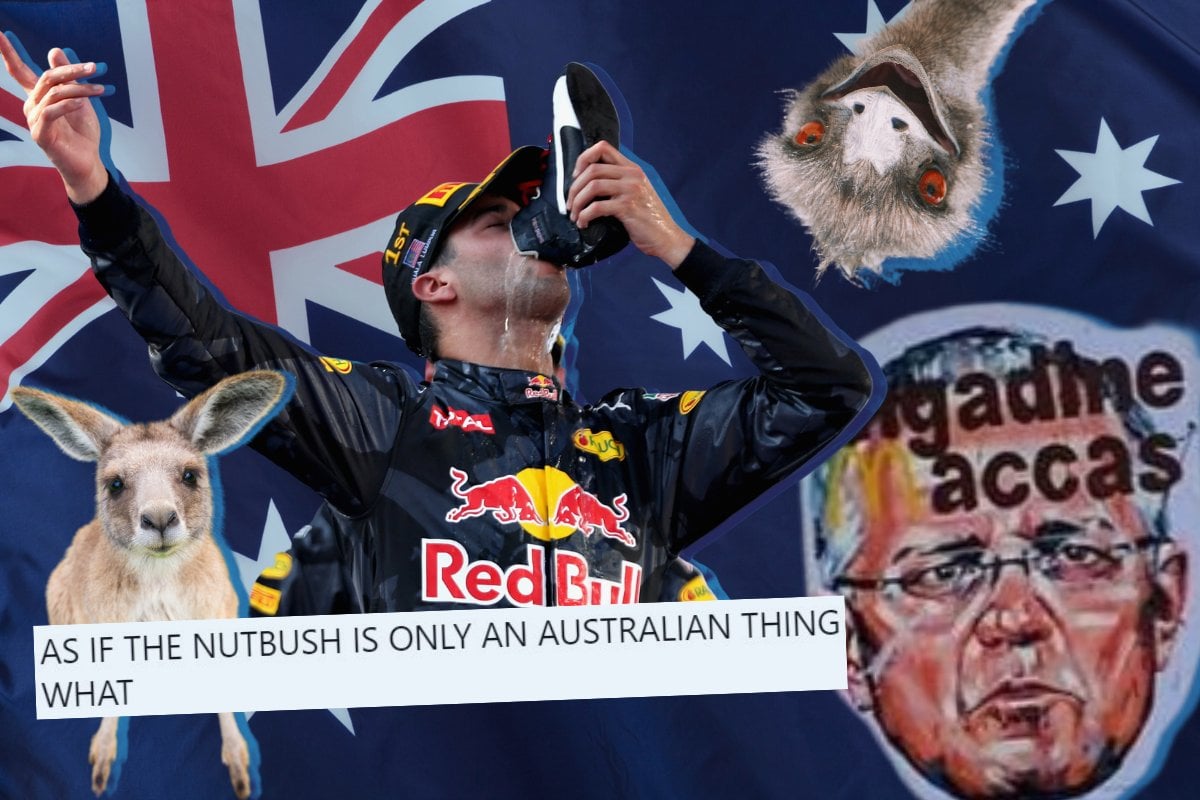 This may or may not come as a surprise to Australians, but... this country is weird.

I mean, for starters, it's a fairly inhospitable chunk of land with seemingly endless amounts of killer creatures. But goodness, there is so much more.

Personally, I'll never move on from the time I learned you all call a weed eater a 'whipper snipper'. That haunts me every damn day.

Mamamia asked its community of... non-Australians about the strangest, most confusing things Australians do and say.

Look, I don't know if this will be... confronting or not, but maybe grab yourself a schooner (more on that later) or something in preparation, because this is what we came up with:

1. Australians love to gamble. I hail from the non-two-up-playing half of the ANZAC countries and was extremely confused to learn there is a gambling-based game that is only legal to play on the day we commemorate veterans. Truly bizarre. NSW also seems to have pokie machines in ABUNDANCE, and I don't know how or why it happened - but I even get texts from a betting agency???

2. All Australian celebrities are from reality TV shows. EVEN THE HOME AND AWAY AND NEIGHBOURS STARS.

3. "Everyone goes to bed at 9pm and gets up ridiculously early. I now do this as well and blame Australia."

4. "Being drunk in a pub seems to be some sort of crime?"

5. The obsession with abbreviating... everything. So many of these just make sense - like Maccas. Who has the time to say McDonalds? But if someone's name is Steve, calling him Steve-o is actually MORE WORK.

why do Australians have to shorten everything?? Does Arvo mean Avocado or Afternoon????

6. "Honestly the use of the C-bomb as a positive bro-ey word still startles me." True. There are few places on earth where calling someone c*** means you're mates, but calling someone mate means you think they're a... yeah.

8. Australians eat one of their national animals.

11. "My boyfriend hates the way we pronounce T as D. I.e. water as wader. His daughter's name is Kitty and Australians pronounce it Kiddy. Which drives him mental. But humours me no end."

12. "Weirdly specific but my Scottish dad hates when Aussies say 'bread rolls' instead of just 'rolls'? It's like a weird trigger for him."

15. Alcohol is not sold in supermarkets which is highly inconvenient but also... doesn't seem to curb any drinking culture issues.

16. Speaking of... can someone please explain a shoey. Why? WHY?

Why the F do Australians drink alcohol out their shoe?

which is at the same time completely baffling and also makes all of the sense in the world https://t.co/SmmwOeCo3I

19. I was once forcibly made to learn the Nutbush in a pub, because apparently nothing gets an Australian going like a Tina Turner song from the 70s.

21. Just a reminder of how an Australian prime minister went for a swim and disappeared, presumed drowned, and Australians... named a pool after him.

22. A PRIME MINSTER a.k.a the dude running the country is not only known by Australians as SCOMO, but said PM addressed publicly rumours that he s*** himself in a Maccas after a footy game. Only in Australia.

23. Having voted multiple times in my homeland, without feeling a desperate need for sustenance, the 'democracy sausage' really threw me for a loop.

24. "I really enjoy how you can swear at politicians here and no one bats an eyelid."

25. "Musk should never, ever be the flavour of something edible."

26. "'Bring a plate' - back in the day my mum didn't understand why she had to bring a plate to a party. So she brought A PLATE only to find out it meant bring a plate of food."

SEE, AUSTRALIA? You're weird. We love you dearly, and I'll fully embrace a shower beer, but you're weird.

Reply
Upvote
1 upvotes
Of course we have to use celebs from reality TV, everyone else who has ever been in Neighbours or Home and Away now makes $10million a film.