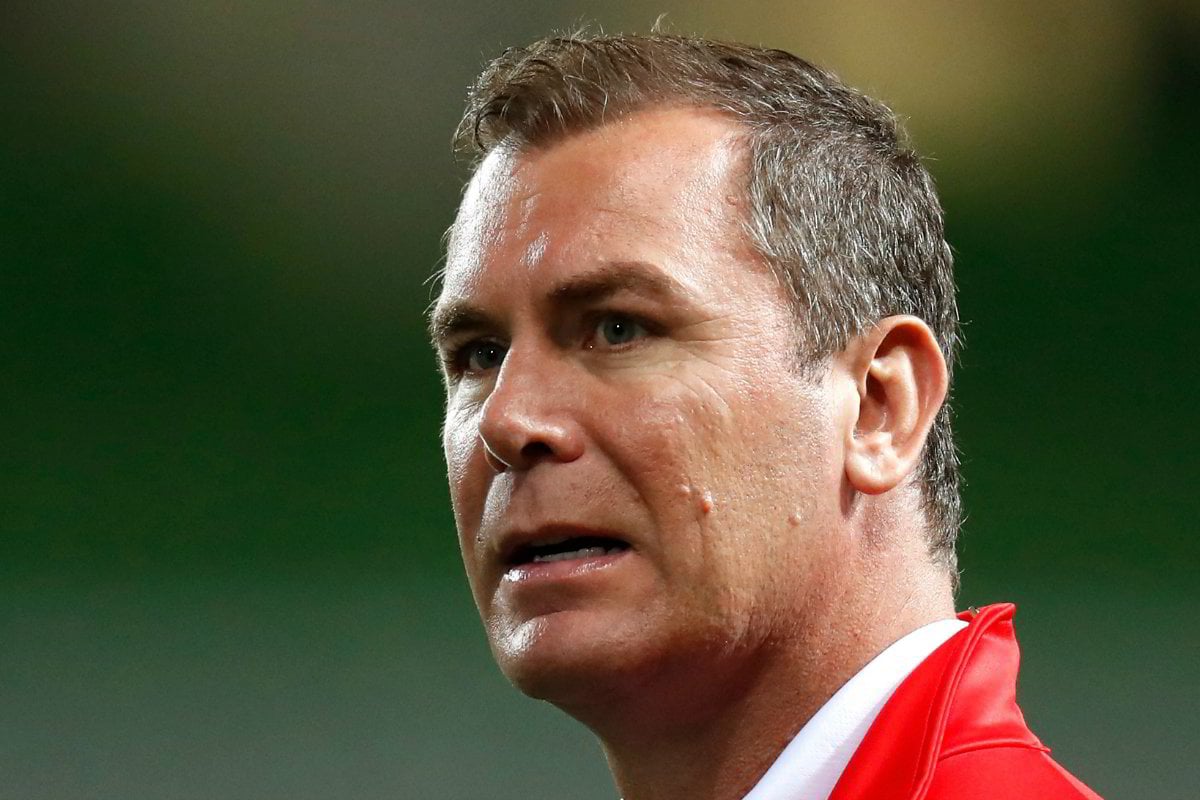 It's ostensibly for a good cause. The former AFL player turned commentator will be removing his clothes on Seven's The All New Monty: Guys and Gals, a program that uses the lure of stripping celebrities to raise awareness of various cancers.

Yet however admirable the goal, Carey's casting is anything but.

Watch: Wayne Carey is apparently about to face his 'biggest challenge'. Ok.

In 1997, he pleaded guilty to indecent assault after grabbing a woman’s breast on a Melbourne street, allegedly asking her, "Why don’t you go and get a bigger set of tits?" The matter settled out of court.

In 2007, Miami police were summoned to a luxury hotel after Carey allegedly smashed a wine glass into the face of his then girlfriend, Kate Neilson, during a confrontation in the hotel's restaurant. When police went to the couple's suite, Carey lashed out and kicked a female officer in the mouth. He was convicted of battery on a law-enforcement officer, while Neilsen decided not to press charges.

In 2008, police were called to Carey's Port Melbourne home amid reports of a domestic dispute. When they arrived, he assaulted them and had to be subdued with capsicum spray. He was convicted and fined $2000 for assault and resisting police.

While initially sacked from Channel 9 and 3AW, television networks and the AFL community ultimately forgave Carey these crimes. Or at least that's the message they sent when he was returned to the Seven commentator's chair in 2014 and cast on weekly 7Mate panel show Talking Footy.

And now on Sunday, there he'll be, dancing around with his gear off on prime time television, where he'll likely be identified as an "AFL great" or "football legend" or some other shiny superlative.

The audience will laugh and cheer and tweet along, because his ongoing mainstream media presence has allowed us to forget what he's done; and because in casting him, television networks have given us implicit permission to dismiss his crimes as simply 'in the past'.

As long as high-profile offenders are offered up as cheeky entertainment, as long as they are given a platform (on which any of ﻿a dozen other people could easily have stood instead), then it's clear: our culture still isn't willing to take this issue seriously.

Reply
Upvote
2 upvotes
People like him never change. His image can be contrived to be polished up. He can write pathetic 'I'm a changed person' autobiographies but I for one do not believe that he ever deserved to be elevated into the TV presenter world after his repeated violent offences. There are so many other decent people who aren't criminals  around who could have been doing his job on TV.
K
kathryn.downs84 2 years ago

Reply
Upvote
2 upvotes
I am a family lawyer and happen to be old enough to remember this individuals transgressions I am horrified by why anyone would give him oxygen for anything he has priors & form ......not matter how noble the charitable cause I won't be watching with him in it
News
General
Opinion
True Crime
Politics
Sport
Explainer
Entertainment
Celebrity
Reality TV
Movies
TV
Books
Rogue
Royal
Lifestyle
Beauty
Fashion
Weddings
Home
Wellness
Health
Fitness
Travel
Food
Parents
Before The Bump
Pregnancy
Baby
Kids
Teens
School
Parent Opinion
Work & Money
Money
Finance
Career
Lady Startup
Relationships
Sex
Dating
Separation
Friendship
Family
Real Life
Couples