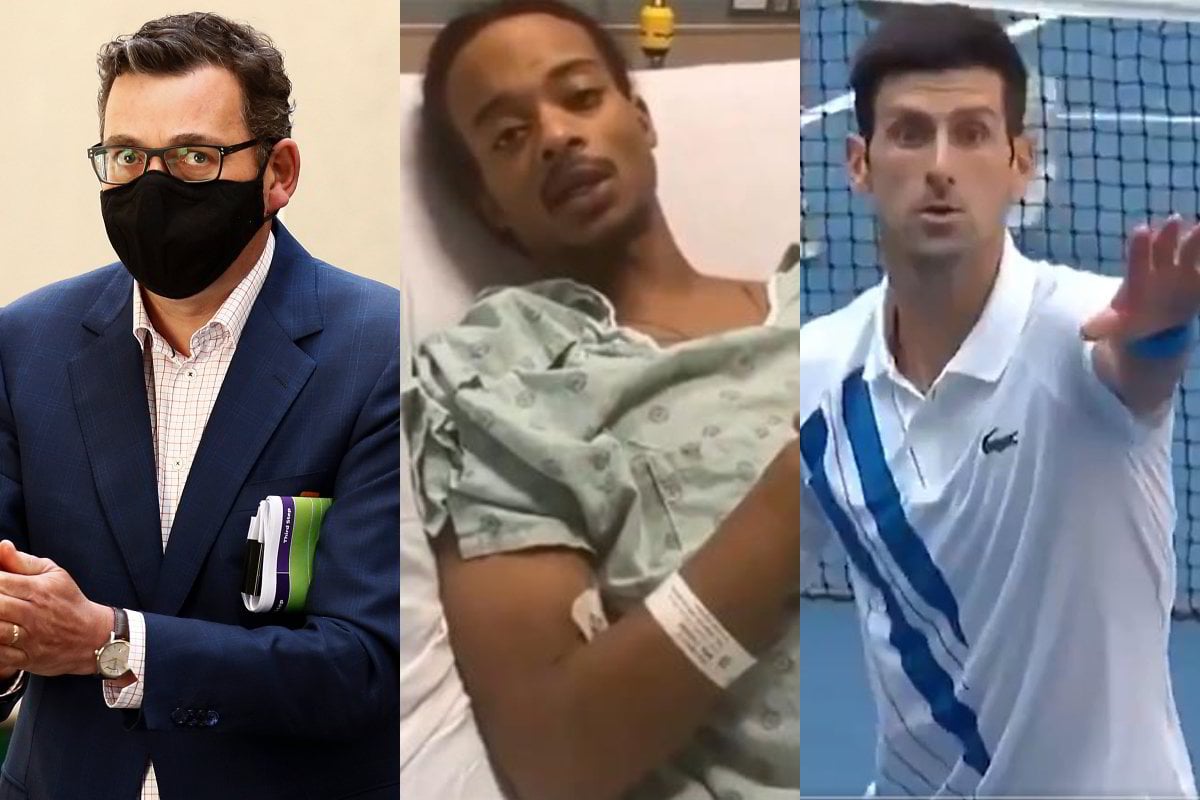 Victoria has recorded 41 new cases of coronavirus in the 24 hours to Monday﻿, the state's lowest daily increase since late June.

The state has recorded nine more deaths, taking the state's death toll since the start of the pandemic to 675.

#COVID19VicData for 7 September, 2020. There were 41 new cases reported and 9 lives lost. Our thoughts are with those impacted. More information will be available later today. pic.twitter.com/NfCMBdBDzP

It's the lowest daily increase since 41 cases were reported on June 28.

Under the plan, Melbourne's stage four restrictions will remain in place for another two weeks, though from September 14 the nightly curfew will start an hour later at 9pm and run until 5am.

People living alone will also be able to nominate a friend or family member who can visit them, while two hours of daily exercise will be allowed, including "social interactions" such as having a picnic at a local park or reading a book at the beach.

Depending on who you speak with, Victorian Premier Daniel Andrews is either a statesman of our times, or a dictator. The Quicky looks at the real Dan Andrews. Post continues below.

The curfew won't be lifted until October 26, with people able to leave their homes for non-essential reasons.

The lockdown will only lift on that date if the average number of new cases falls below five and there are fewer than five unknown source cases.

Up to five visitors from a nominated household and outdoor gatherings of up to 10 people will also be allowed.

"I want a Christmas that is as close to normal as possible and this is the only way, these steps are the only way that we will get to that point."

The premier said the nominated 14-day average of five cases provided a 97 per cent chance of avoiding having to go back into lockdown.

Victoria's average daily number of cases during the previous 14 days was about 100.

The last step will come into effect from November 23, if Victoria goes 14 days with no new cases, allowing public gatherings of up to 50 people and 20 home visitors at a time.

All remaining restrictions will be removed when Victoria goes 28 days with no new cases, although masks will likely remain compulsory for some time.

Regional Victoria, however, will be able to move to the third step of restrictions "quite soon".

"It will be, perhaps, a matter of weeks before regional Victoria can move to a very different range of settings compared to metropolitan Melbourne," Mr Andrews said.

"Leave no one behind." That's the message from Victorian businesses who have SLAMMED the state government's 'roadmap to recovery', calling it a road to nowhere. #9Today pic.twitter.com/wMk6qvWIWV

Victorian Chamber of Commerce and Industry Chief Executive Paul Guerra was among a chorus of critics who said the plan did not do enough to protect struggling businesses.

"We were hoping for a road to recovery. Today we have been delivered a road to nowhere," he said.

"We can't continue to let business and jobs be decimated on the way to controlling the spread of the virus."

Mr Morrison spent Sunday evening reviewing the details of the plan, and is expected to respond in more detail on Monday.

On Sunday, Victoria recorded 63 new cases and five more deaths, taking the state's toll to 666 and the national figure to 753.

Free COVID-19 vaccine could be available by early next year.

British and Queensland-designed coronavirus vaccines could be available early next year under two deals struck by the federal government at a cost of $1.7 billion.

Prime Minister Scott Morrison will on Monday announce a free COVID-19 vaccine would be made available progressively through 2021, should promising trials prove successful.

The Oxford vaccine is slated to be available from early 2021 while the University of Queensland version is on track for midyear.

More than 84.8 million vaccine doses would be manufactured, primarily in Melbourne.

"By securing the production and supply agreements, Australians will be among the first in the world to receive a safe and effective vaccine, should it pass late-stage testing," Mr Morrison said.

"There are no guarantees that these vaccines will prove successful. However, the agreement puts Australia at the top of the queue, if our medical experts give the vaccines the green light." 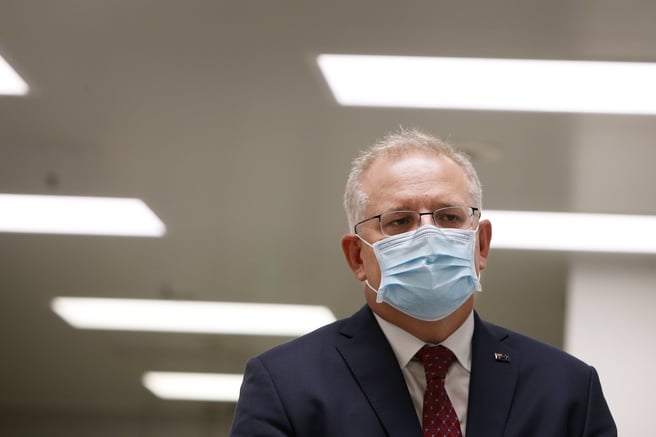 The first stage of the agreement would see 3.8 million doses of the University of Oxford vaccine delivered in January and February 2021.

Health Minister Greg Hunt said it would not be mandatory, but the government wanted to see as broad coverage of the population as possible.

Both agreements will also allow for doses to be provided to Australia's partner countries in the Pacific and Southeast Asia.

The University of Oxford/AstraZeneca vaccine is in the third phase of trials and is considered one of the best hopes in the world, with regulatory approval expected to be sought shortly.

UQ has recently announced that pre-clinical testing showed the vaccine is promising and already effective in animal models.

Experts believe the vaccination of at least two-thirds of the population will be required to have a chance of halting the spread of COVID-19.

Two Sydney schools are closed after students tested positive to COVID-19, while the number of cases linked to a CBD gym has grown to 64.

The prestigious Kincoppal-Rose Bay School in Sydney's east is closed for on-site learning on Monday after two year 7 students were among the 10 new cases reported in NSW on Sunday.

Lidcombe Public School in western Sydney is also closed after a new case was linked to the school.

Both schools are undergoing a deep clean and contact tracing is underway.

Of the 10 new cases, two are under investigation - a man in his 40s from northern Sydney and a child from western Sydney, with their origins currently a mystery.

Three other cases have been linked to the City Tattersalls Club gym cluster, bringing its total to 64, and one is a contact of a previously reported case.

The other four of Sunday's cases are returned overseas travellers in hotel quarantine.

One of the new cases has been linked to Hyde Park Medical Centre in Liverpool Street in Sydney's CBD.

Patients who attended the centre's physiotherapy, pathology, dermatology and dental practices and pharmacy on the ground floor between August 24 and September 5 have been asked to watch for symptoms.

All patients and staff in close contact have been advised to isolate and get tested.

Police also handed out 81 fines worth $1000 each for alleged breaches of public health orders at the protests.

A nurse working with infected patients at Ipswich Hospital was one of two people diagnosed on Sunday. The other is the sister of a student at Staines Memorial College, who was already in quarantine.

She said both new cases were part of the outbreaks at the Brisbane Youth Detention Centre and Queensland Corrective Services training centre.

Testing previously found it was likely the clusters were linked to three women who lied on their border declarations after returning from Victoria in July.

Two of them then spent more than a week in the Brisbane area visiting restaurants, cafes and working before testing positive to coronavirus.

The cluster at the detention centre at Wacol began when a prison worker tested positive for coronavirus in August.

It lead to a second cluster at the nearby Correctional Services Training Academy when a senior trainer became infected.

Some of the staff potentially exposed at the centre also worked at the Arthur Gorrie Correctional Centre.

Southeast Queensland prisons went into lockdown 10 days ago as a result, with 7000 prisoners confined to their cells.

"Nothing but pain." Jacob Blake finally speaks after shooting.

The man shot seven times in the back by a police officer in Kenosha, Wisconsin, has spoken publicly for the first time.

Jacob Blake, 29, said he is in constant pain from the shooting, which doctors fear will leave him paralysed from the waist down.

#JacobBlake released this powerful video message from his hospital bed today, reminding everyone just how precious life is. #JusticeForJacobBlake pic.twitter.com/87CYlgPDBj

In a video posted on Twitter by his family's lawyer Ben Crump, Mr Blake said from his hospital bed: "Twenty-four hours, every 24 hours it's pain, nothing but pain.

The father-of-six, also said he has staples in his back and stomach.

"Your life, and not only just your life, your legs, something you need to move around and forward in life, can be taken from you like this," Mr Blake said, snapping his fingers.

He added: "Stick together, make some money, make everything easier for our people out there, man, because there's so much time that's been wasted."

Mr Blake, who is black, was shot in the back by a white police officer on August 23 after walking away from the officer and two others who were trying to arrest him.

The officer, Rusten Sheskey, opened fire after Blake opened his own SUV's driver-side door and leaned into the vehicle.

The shooting was captured on video and posted online, sparking several nights of protests and unrest in Kenosha, a city of about 100,000 between Milwaukee and Chicago.

Mr Sheskey and the other officers who were at the scene were placed on administrative leave pending the outcome of an investigation by the Wisconsin Department of Justice.

None of them have been charged.

Djokovic disqualified from US Open.

Top seed Novak Djokovic has been disqualified from the US Open after hitting a ball in anger that struck a female line judge in the throat during a match against Spain's Pablo Carreno.

The moment that #1 Novak Djokovic knew that his #USOpen and his undefeated 2020 season were over. pic.twitter.com/uwd5fbXKb1

The world No. 1 went 5-6 down in the first set and frustrated, struck a ball in the direction of the official. It struck her in the throat, causing her to gasp.

Djokovic held his hand up in apology and rushed to check she was okay, before she left the court.

After about 10 minutes of discussion with the referee, the umpire declared that Carreno Busta had won by default.

Djokovic was the favourite to win the tournament and claim his 18th Grand Slam title, with his rivals Roger Federer and Rafael Nadal both absent.

- Nearly 3000 new cases of COVID-19 have been reported in the UK, in the largest daily figure since May.

- Around 15,000 firefighters have been battling two dozen fires across the state of California, as a heat wave sees temperatures reach up to 52C in Death Valley.