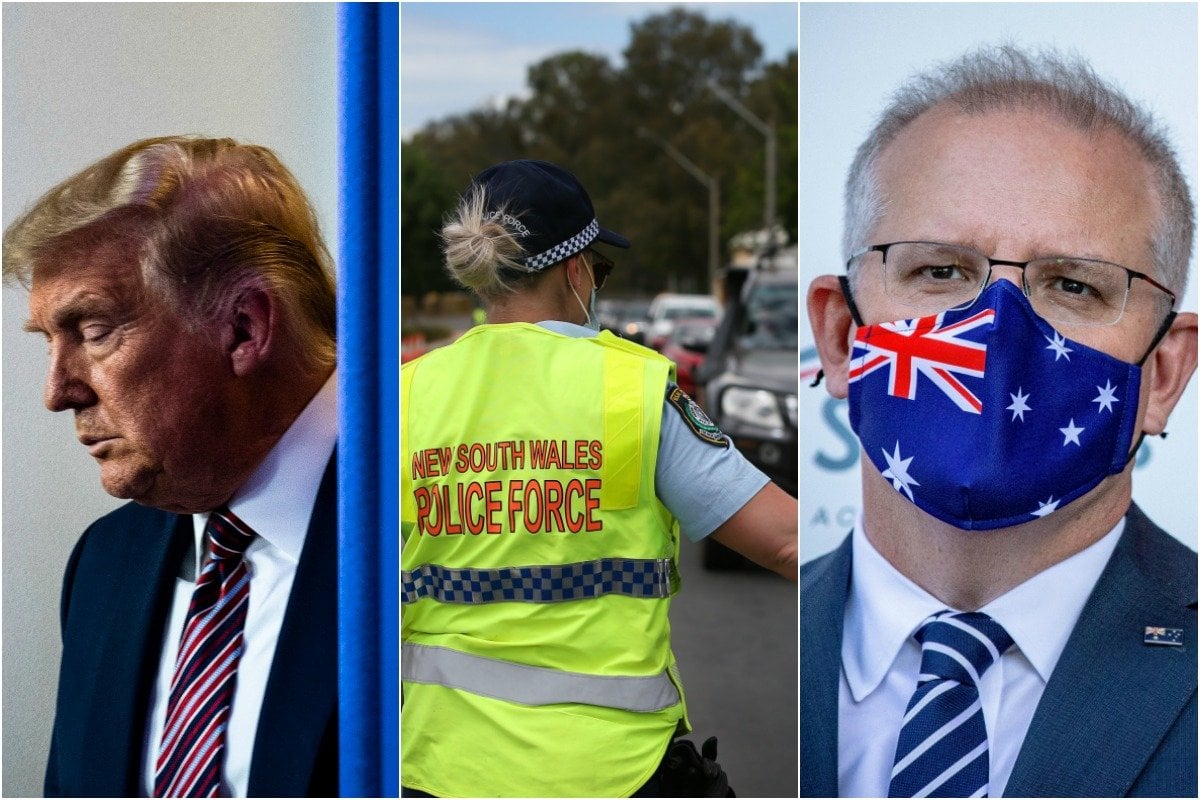 A 14-year-old boy is seriously injured after being stabbed in the back and arm during an "absolutely horrific" attack at a western Sydney school.

The boy was stabbed at Arthur Phillip High School in Parramatta just before 8.30am on Monday.

He has been taken to Westmead Children's Hospital in a stable condition, a NSW Ambulance spokesman said.

Four ambulance crews were sent to the school and a strong police presence remains in place. No arrests have yet been made.

"Our paramedics did an exceptional job in stabilising and providing treatment for the teenager who had suffered some pretty serious injuries," he added.

"It's absolutely horrific when we respond to jobs like these, especially when it involves someone so young. It's every parent's worst nightmare."

Mandatory outdoor mask rules in Victoria are no more, as the NSW border reopens to the state ending months of exile.

As part of sweeping changes effective from midnight on Monday, Victorians no longer have to wear masks outdoors unless unable to safely physically distance.

They must still wear masks in indoor environments including workplaces, supermarkets and public transport, and carry them at all times.

Statement on further easing of restrictions in Victoria: pic.twitter.com/NKnwxC81er

Other rule tweaks from Monday include 15 home visitors being allowed per day, up from two, while limits on outdoor public gatherings rise to 50 people.

Large restaurants, cafes and pubs will be able to host up to 150 customers indoors, while smaller venues will be limited to 50 and must keep QR code records.

Premier Daniel Andrews also outlined additional moves back to normality, including up to 30 home visitors per day from December 13 - just in time for Christmas - and 25 per cent of staff returning to workplaces from November 30.

Victoria extended its streak without a new COVID-19 infection or death to 23 days, as its border closure with NSW came to an end at midnight on Monday.

From 12.01am Monday 23 November, the NSW-Victoria border is open. Thank you to the residents of our border communities for your patience and understanding during this time. pic.twitter.com/ujRax3iXDv

SA has 'no regrets' about lockdown.

The South Australian government is defending the decision to lock down despite low case numbers and revelations a pizza shop worker allegedly gave false information to contact tracers about his whereabouts.

Chief Public Health Officer Nicola Spurrier presented modelling at a Sunday press conference that showed the state had a 99 per cent chance of a "significant" COVID-19 wave if it did not enter a lockdown last week.

She said she had "no regrets" about the decision and would only feel fully confident SA had escaped a second wave in a few weeks.

South Australia's lockdown may have been brief, but for some people, it came at the worst possible time - interrupting key moments in life, that had been months, even years in the planning. @9keziahsullivan #9News pic.twitter.com/mtiaaQckdt

The state recorded just one new coronavirus case on Sunday, an overseas traveller in her 20s who was in a quarantine hotel. The Parafield cluster in suburban Adelaide remained stable at 26 cases.

The revocation of the stay-at-home order means bars and restaurants are back open, though bookings are capped at 10. Hairdressers, gyms and schools are back too.

But South Australians are being warned to be vigilant and urged to wear masks.

Two children have died and another boy, aged one, is critically injured after a car carrying six people crashed into a dam at Wyaralong, in southeast Queensland.

Queensland police say the car was submerged in the water before the occupants were recovered by emergency services and witnesses on Sunday afternoon.

A one-year-old boy is in hospital and two other children have tragically died after their family car crashed into a dam south-west of Brisbane. #9Today pic.twitter.com/I5AcMg4Yc0

A four-year-old girl and a 13-year-old boy were pronounced dead at the scene. Two off duty doctors were among passersby who helped pull victims from the water.

A man and a woman were also taken to hospital with leg injuries for further assessment.

Another defeat for Trump election claims.

After a scathing court setback in Pennsylvania, President Donald Trump faces increased pressure from fellow Republicans to drop his efforts to overturn the US presidential election and concede to Democrat Joe Biden.

Since Biden was declared the winner two weeks ago, Trump has launched a barrage of lawsuits and a pressure campaign to prevent states from certifying their vote totals.

So far, attempts to thwart certification have failed in courts in Georgia, Michigan and Arizona.

For Trump to have any hope of remaining in the White House, he needs to eliminate Biden's 81,000-vote lead in Pennsylvania. The state is due to begin certifying its results on Monday.

Trump's lawyers vowed a quick appeal, but lawyers who opposed him in court say he is out of time.

Some of Trump's fellow Republicans in Congress are breaking ranks.

Republican Senator Pat Toomey said the ruling closed off any chance for a legal victory in Pennsylvania and called on Trump to concede the election.

It's time for the president to concede and "facilitate" the transition process, Toomey says. https://t.co/Tps0RwhtR5

Liz Cheney, a member of the Republican leadership team in the House of Representatives, earlier called on Trump to respect "the sanctity of our electoral process" if he does not succeed in court.

Chief of Defence: ADF must 'own' Afghan findings.

Chief of Defence Angus Campbell has warned if the defence force doesn't 'own' the Brereton report on Australian war crimes and fix them, this horror may happen again.

The report from Justice Brereton released last week found that 39 Afghans were allegedly murdered by Australian special forces in 23 incidents.

"I want the ADF to acknowledge that this is something we've got to own because if we don't own it, we won't fix it and if we don't fix it, this horror may appear again," he told ABC TV.

WATCH: Defence Force Chief General Angus Campbell on whether he really believes that the commanders had no idea that 39 unlawful killings took place on their watch. #auspol #insiders pic.twitter.com/UxTTQvNZba

He committed to be held to account to make sure the report is dealt with thoroughly and also for his duty and performance as the commander in the Middle East in 2011.

"There is no shortage of officers, senior, non-commission officers and soldiers, who are looking at this report and reflecting on their part in this story and it is not a good story at all," he said.

Morrison in quarantine at The Lodge.

Prime Minister Scott Morrison has returned from Japan and began his two week mandatory quarantining on Sunday at The Lodge.

He is isolating alongside his staff photographer Adam Taylor who has shared pictures of the prime minister on an exercise bike, getting his COVID test and walking around in thongs and board shorts.

The Sunday Telegraph reports the residence has been divided into red, yellow and drop zones  - with not even the AFP allowed in the red or yellow zones unless there is a security issue.

How does a prime minister pass the time while in quarantine? The Sunday Telegraph has spoken to Scott Morrison and obtained exclusive pictures in lockdown. https://t.co/OpQbIclzwn

Morrison must remain outside of the dining room while a "drop" of food is made, and is only allowed to enter upon receiving a Whatsapp message.

Everyone else who enters the country from overseas has to enter hotel quarantine at their own expense for 14 days.

A man has been killed by a large shark at Broome's popular Cable Beach in Western Australia's north, with a couple who dragged him from the water unable to save his life.

The man, a Broome local aged in his 50s, was bodyboarding 30 to 40 metres offshore on Sunday morning when he was attacked.

He was recovered from the water and treated by local police before St John Ambulance officers arrived but was pronounced dead at the scene.

Police fired shots at the shark, which remained very close to the shore for about half an hour and is yet to be found.

Its species is not yet known, with the water described as being "very murky", but Insp. Pears said it had been described as about three to four metres long.

WA's fisheries department has deployed a patrol vessel to monitor the area and all local beaches will remain closed until Monday morning.

Research from the University of NSW has prompted the scientists to nominate the platypus for threatened species listing both nationally and in NSW.

Within Australia's threatened species categories, a "vulnerable" listing is one step under "endangered".

The researchers combed through all available data on platypus observations, and found sightings were down 32 per cent in NSW, 27 per cent in Queensland and seven per cent across Victoria.

Drought, bushfires, wild predators and illegal fishing nets are some of the main threats to platypus numbers.

- US President-elect Joe Biden will reveal the first appointments to his Cabinet on Tuesday and has promised to build an administration that reflects the diversity of the country.

- The UK government will announce a new system of local restrictions to replace the lockdown lifting on December 2 and is warning "Christmas will not be normal."

- The Duke and Duchess of Cambridge are mourning their nine-year-old cocker spaniel Lupo who died last weekend.