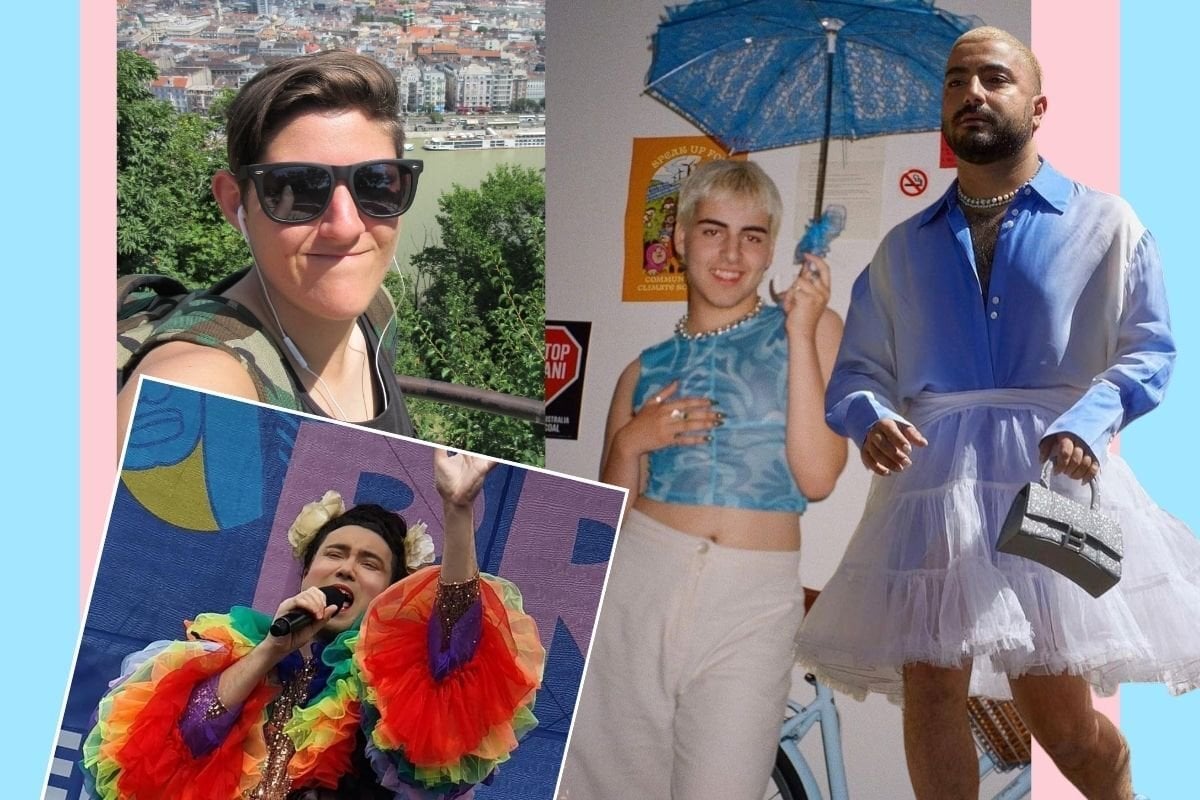 Through conversation with our four transgender interviewees - Melbourne jazz singer, cabaret performer and CEO of Transgender Victoria, Mama Alto; Geelong-based fashion stylist and co-host of Mamamia podcast, What are You Wearing?, Deni Todorovič; Construction worker from NSW's Central Coast, Jess Peroy, and Year 11 student, Theo Boltman - this is their list of collective top priorities for progress.

To make Australia safer, fairer and more inclusive for the transgender community.

Trans, gender diverse and non-binary people: You are loved. You are valid. You matter. pic.twitter.com/9u1YJLShTn

Obviously individuals and organisations can and should take it upon themselves to implement these opportunities for progress where possible, but with a federal election around the corner, what do our politicians say in response? Mamamia asked them.

This gets a little heavy, but is necessary reading, so buckle up, and make a cuppa.

This is what the federal government told us –

On the need for gender-neutral language, a spokesperson from the Attorney-General’s Department told Mamamia, that “the government supports the rights of individuals to make use of any pronouns or descriptors they prefer while encouraging respect for the preferences of others.”

Meanwhile, in response to the discrimination often faced by transgender people when using public bathrooms, the spokesperson said, “As a general proposition, a person should use facilities that correspond to their gender identity,” advising that “any concerns about inappropriate behaviour or potentially criminal conduct should be immediately referred to the police".

While both are positive steps, the government stops short of introducing any initiatives that either prevent or address the underlying issues of protection from discrimination.

Deni Todorovič shares their coming out story with Mia Freedman on No Filter. Article continues after video.

A spokesperson from the Department of Health told Mamamia that “the Federal Government is committed to supporting, protecting and promoting the health and wellbeing of LGBTIQ+ people”.

“That is why the Government has included LGBTIQ+ people as a priority population across a number of national health strategies, plans and frameworks. This is in recognition of their experienced health disparities, and acknowledges that each individual has unique and often complex health needs.”

As for the exclusion of gender-affirming surgery being covered by Medicare, the spokesperson asserts there “are a range of surgical procedures and consultation services eligible for Medicare rebates” - and sites the important role of private health insurance.

But of course, we know that not everyone has the privilege of being in a position to afford private health care.

And yet, on the need for better educated and trans-aware doctors, the spokesperson says - rather broadly - they’re “working with a range of stakeholders… to ensure better health for all Australians and equitable access for vulnerable groups including the LGBTIQ+ community.”

Indeed, in addressing the unique and dire mental health outcomes for trans youth, the department says it has invested a record $2.3 billion “to reform the mental health and suicide prevention system”.

They continue, “This funding ensures all Australians, including LGBTIQA+ Australians can access the support, treatment and services they need, when they need them.”

But how much money has gone towards an organisation that specifically addresses the unique needs and nuances of LGBTQI+ health?

Meanwhile, in a letter penned to Federal Health Minister Greg Hunt dated March 5, 2020, the Royal Australian College of Physicians (RACP) wrote that those who identify as trans or gender diverse or experience gender dysphoria are “an extremely vulnerable group who need the support of clinicians, the health system, their families, friends and wider support networks”.

These groups “experience stigma and extremely high rates of depression, self-harm, attempted suicide and suicide,” the RACP stated, going on to push the Australian government on three measures; to work with states and territories to improve access to and consistency of care within and across jurisdictions; to facilitate the development of a robust evidence base through funding and research into gender dysphoria; and to develop evidence-based fact sheets that will be made available to all patients and their families to support informed consent.

The calls have been backed by Transcend Australia, the first parent-led, national peer support network and community for parents and carers supporting their trans, gender diverse and non-binary child.

It’s up to the individual states, it seems.

“Given the clinical nature of the activities, it is appropriate that states and territories undertake this ongoing development of an evidence-based national approach,” said the department spokesperson.

Listen to Mia Freedman talk to Georgie Stone, the teen who changed gender. Post continues after.

A spokesperson for the Department of Education, Skills and Employment told Mamamia that while the Australian government is committed “to supporting school communities to be safe, supportive learning environments that promote wellbeing, resilience and learning outcomes for all students… it is the responsibility of the government and non-government education authorities in each state and territory to manage schools, including ensuring equal access to education and support for all students’ wellbeing.”

While the spokesperson shed light on the various anti-bullying initiatives in which the government has invested funding, it is the ‘Respect Matters’ program that focuses on LGBTQI+ students, consisting of targeted respectful relationships education resources for diverse student groups, including students and their families who identify as LGBTQI+.

“All students have the right to be safe at school and bullying of any nature is unacceptable. All schools have a responsibility to ensure that their students are safe, respected and supported each day,” said the spokesperson.

As for improved education in the workplace, the spokesperson for the Attorney-General reiterated the Sex Discrimination Act which prohibits discrimination on the grounds of gender identity, sexual orientation and intersex status in public life, employment and education.

They emphasised that the Australian Human Rights Commission has the power to investigate and attempt to conciliate certain complaints of sex discrimination, including gender identity and sexual orientation discrimination.

The spokesperson also encouraged those who believe they have been unlawfully discriminated against to consider contacting the Australian Human Rights Commission to lodge a complaint.

“Labor has a proud record of taking action to protect LGBTQ Australians from discrimination."

"In government, we would work with the LGBTQ community with respect to these issues.”

We hope every single trans kid across Australia gets to watch this message of love and support. 🏳️‍⚧️@georgiestone16 @SuzyWrong @jezwiggins pic.twitter.com/D1QfSQVniT

'I want growth and joy through togetherness.'

While it may be easy to be overwhelmed by the politicisation of wide-ranging issues that affect transgender people, at its core, it's actually really simple.

Our schools and workplaces and media and public spaces and healthcare and society needs to do better by trans Australians - to make their lives fairer, safer and more equitable.

Our government needs to do better too - whoever that is to be after May.

But it's about more than statistics - or labels. 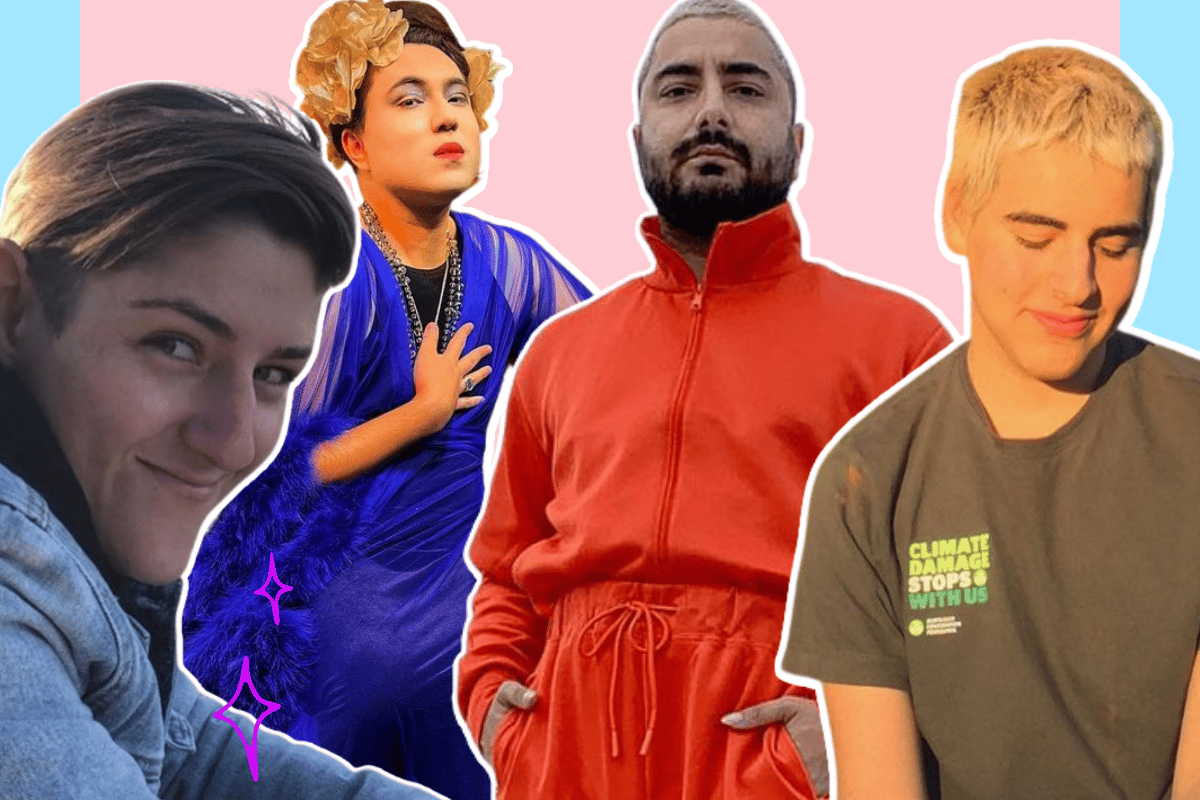 Says Jess, “Honestly, I just love just being outdoors. Camping, kayaking, hanging out with my friends. That's, that's who I am and what I love. I’m just me. Jess.”

“At my true self,” contemplates Theo, “I exist as a being beyond gender. I’m a Jewish person. And I'm a person that has been named Theo. I go to a school. I will graduate soon. I'm a teenager - that's who I am at my core. And that has nothing to do with my gender.”

Meanwhile, Mama Alto has a simple dream: “I just want for myself, and for the world, to be able to create growth and joy through togetherness.”

“I’m just a fashion-obsessed ‘wog boy’ from Geelong who loves Turkish bread from their local Turkish restaurant, who loves watching reality TV with their mum; who loves the beach in summer and watching the Geelong Cats play in the winter. Just very regular.”

Keen to read more from Rebecca Davis? You can find her articles here, or follow her on Instagram,  @rebeccadavis___