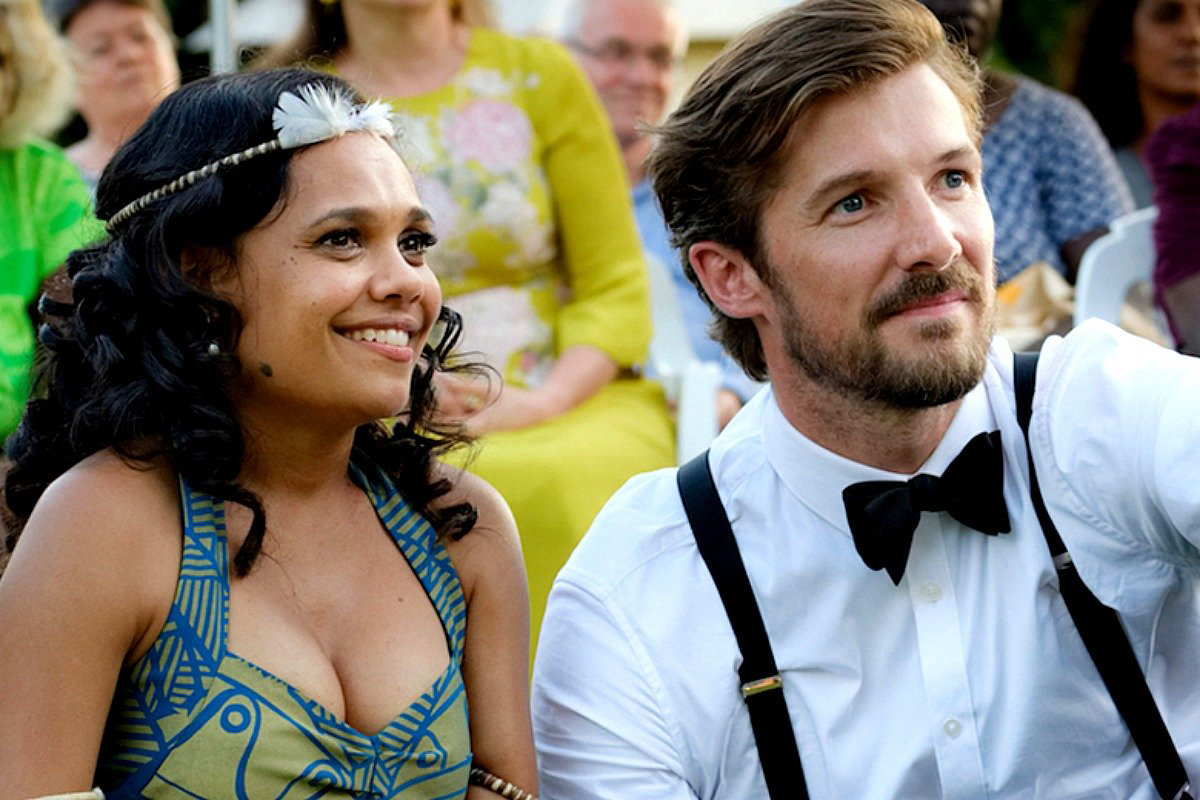 If romantic comedies have taught us anything, it’s that true relationship magic is forged in the fires of attraction, opportunity and, in many cases, rage.

In the movies it’s what’s known as a ‘meet-cute’, a scene where our leading characters meet in a memorable way that often leads to a clash of personalities or a wry misunderstanding that ends up driving the plot forward and forcing them to form an unbreakable bond.

For Top End Wedding stars Miranda Tapsell and Gwilym Lee, their meet-cute took place on a cold dark day in London, with Miranda fresh off an exhaustive long-haul flight and Gwilym having little to no knowledge of the romantic comedy realm or what awaited him in Australia.

However, just moments into their ‘chemistry test’ and the actors knew instantly that they’d forged the type of bond that would allow them to fall in love on screen against the backdrop of the Northern Territory.

In Top End Wedding, Miranda and Gwilym play Lauren and Ned, a newly engaged couple who head to her hometown of Darwin to pull off their dream wedding in just ten days. They arrive to discover that Lauren’s mother has gone missing and so embark on a cross-country adventure to find her.

“Miranda was on holiday and travelling around Europe, she was going to be in London and so very kindly gave up her morning to meet me,” Welsh actor Gwilym told Mamamia.

“I was just jetlagged and grumbly and then our casting director practically begged me to meet Gwilym,” Miranda confirmed. “When I finally arrived and met him I just thought ‘I’m an idiot’. Why would I not want to meet Gwilym?

“I remember breaking out of character in the audition. I was meant to be supporting him through this but he just brought so much compassion and naivety to the role, I was seeing that character come to life before me right now.”

For successful Australian actress Miranda, Top End Wedding was very much a labour of love, intertwining her love of storytelling with her desire to show off her home state. A region of Australia that rarely gets its turn in the spotlight on the big screen.

“As a Territory girl I really took my hometown for granted, as many teenagers do,” the 31-year-old The Sapphires star said. “So camping and hiking were just not a novelty for me, I wanted to go out to the big smoke and make something of myself, particularly in acting. So when making this movie I just really wanted to remind myself why the Territory is so special. Seeing it through new eyes, particularly Gwilym’s, who had never been there before, I had forgotten how powerful home is,” she said.

For Gwilym, venturing deep into the landscape of the Northern Territory, a place where many Australians have never travelled was both eye-opening and an asset to his character.

“My character Ned has a ‘fish out of water’ element to him as I did filming, so no acting required really,” the 35-year-old Bohemian Rhapsody star said. ” It was amazing, there were many people in the crew who had not been there before so we were on this whole voyage of discovery together. We were lugging camera equipment over quite intrepid landscapes, it’s almost guerrilla filmmaking.”

While Top End Wedding does feature a range of rom-com staples, with a swoon-worthy proposal and even a tension-filled moment in an airport, Miranda was adamant when working on the script that certain movie cliches would not appear.

Thanks to this vow, there is nary a makeover montage or a villainous female character in sight.

“I love rom-coms and I love actresses like Reese Witherspoon, Meg Ryan and Julia Roberts, but I didn’t grow up in New York or know that kind of life so I cannot speak from that place,” Miranda said. “One of the movie tropes I really, really wanted to avoid with this movie was with the male love interest.

“I feel like the males in rom-coms are always jerks and so it’s refreshing to show a man who is incredibly supportive of his wife-to-be, why else would you marry her if you’re not going to do that?

“There’s also the fact that Ned always puts himself in Lauren’s shoes before he chooses to judge her and that was something that was so inherently important to me.”

Following on from their successful chemistry test in London, Miranda set Gwilym one more task to complete before he was able to join her on-screen.

“I was made to watch a list of rom-coms first,” he said. “Miranda is just an encyclopedia of rom-coms so she gave me a list of romantic comedies to watch before even entering the country. It was a stipulation of my visa application before I could work in Australia.”

“He was not even allowed to talk to me before he did that,” Miranda confirmed. “He couldn’t be on first name basis with me until he watched them all.”

“I wasn’t even allowed to look at her,” Gwilym agreed. “I got a quick education on romantic comedies and it was so important as I realied you so often see this sense of toxic masculinity with the male characters in these movies but Ned just wants what is best for the love of his life.”

Top End Wedding is a movie that will make you fall back in love with rom-coms and remind us that true movie magic is all about chemistry.

Top End Wedding is now available to watch on Netflix, it is rated M.

You mean "exhausting," not "exhaustive." "Exhaustive" means "totally comprehensive" or "including everything." You could say, for example, that someone did an "exhaustive" tour of Europe if they thoroughly explored the continent. But a fight from Australia to London that leaves you "jetlagged and grumbly" is simply "exhausting."

Nice article though! I'm looking forward to seeing the movie.