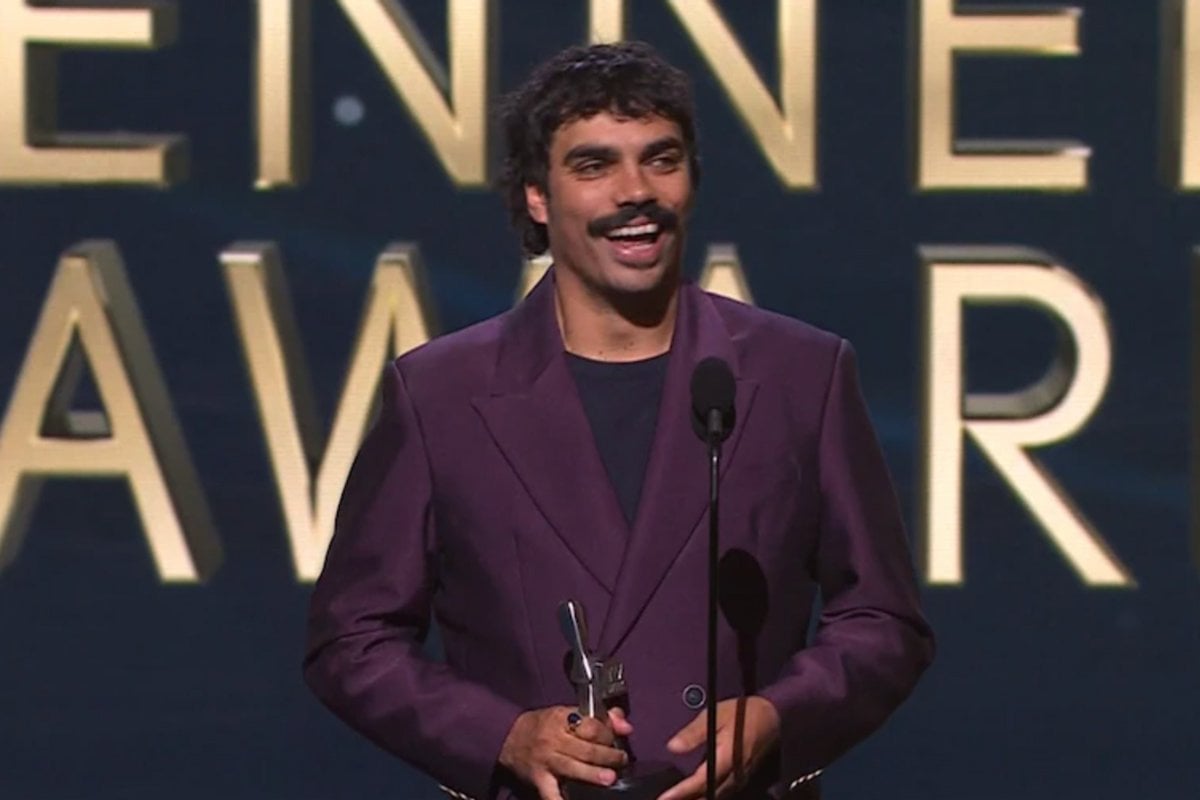 Last year, television presenter Tony Armstrong spoke a simple truth about Australia. It was a truth so apparently uncomfortable that it made news headlines and ignited comments sections for days afterwards.

Tony was on Network 10's panel show The Project, when he weighed in on Incarceration Nation, a NITV documentary about the overrepresentation of Indigenous Australians in the prison system.

"And we've just got to be better."

The clip went viral. It's not the first time the Barranbinya man's words have cut through, and it won't be the last.

Though the former AFL player is still coming to grips with his surging public profile as the new sports presenter on ABC News Breakfast, he's seizing the opportunity.

But it hasn't always come easily to him.

Tony was raised off country in Western Sydney by his white mother (his father left before he was born) and was one of just three Indigenous children at his boarding school in Victoria.

"You put up all these defence mechanisms without even realising it. Every room you walk into, you're basically the only Blackfella. Everywhere you go, you're always a point of difference," he told Mamamia's No Filter podcast.

"I used to get pretty nervous, because kids are ruthless. They'll just come out and ask questions. And when I was younger, I didn't know sh*t about [culture], really... So I got bloody good at ripping yarns, because when you're a kid, you want to come across as knowing who you are."

As he's gotten older, he's not only learned more about culture and about race, but embraced that learning process.

"I'm lucky now to be really comfortable in who I am," he said.

His football career was integral to that. Tony played 35 games in six years for Adelaide, the Sydney Swans, and the Collingwood Magpies, clubs that boasted legendary Aboriginal and Torres Strait Islander players.

"That was great for me, because I got to be surrounded by culture from the age of 18," he said.

"And I've had some titans of the game who have become friends of mine, and have helped me along my journey, which I'm still absolutely on. And I will always be on."

Sport was also a way for Tony to make friends, recently saying in an interview: "I'm an only child. I loved how team sports can bring you a sense of collegiality. You join a sports team. Straight away you've got 22 friends."

In fact, while Tony has never met his father and is not interested in pursuing a relationship with him, he now feels ready to visit his country, meet his mob, to immerse himself in the culture that runs through his veins. He had plans to do so before the COVID-19 pandemic siloed Australian cities.

"I just want to go to where I'm from, really get in touch with one side of my heritage - and probably the side that I identify with the most because I walk around with it," he said to Mamamia.

He is, sadly, well acquainted with the prejudice he's made to endure as a result; the ignorance, the tokenism, the racism - both systemic and explicit. 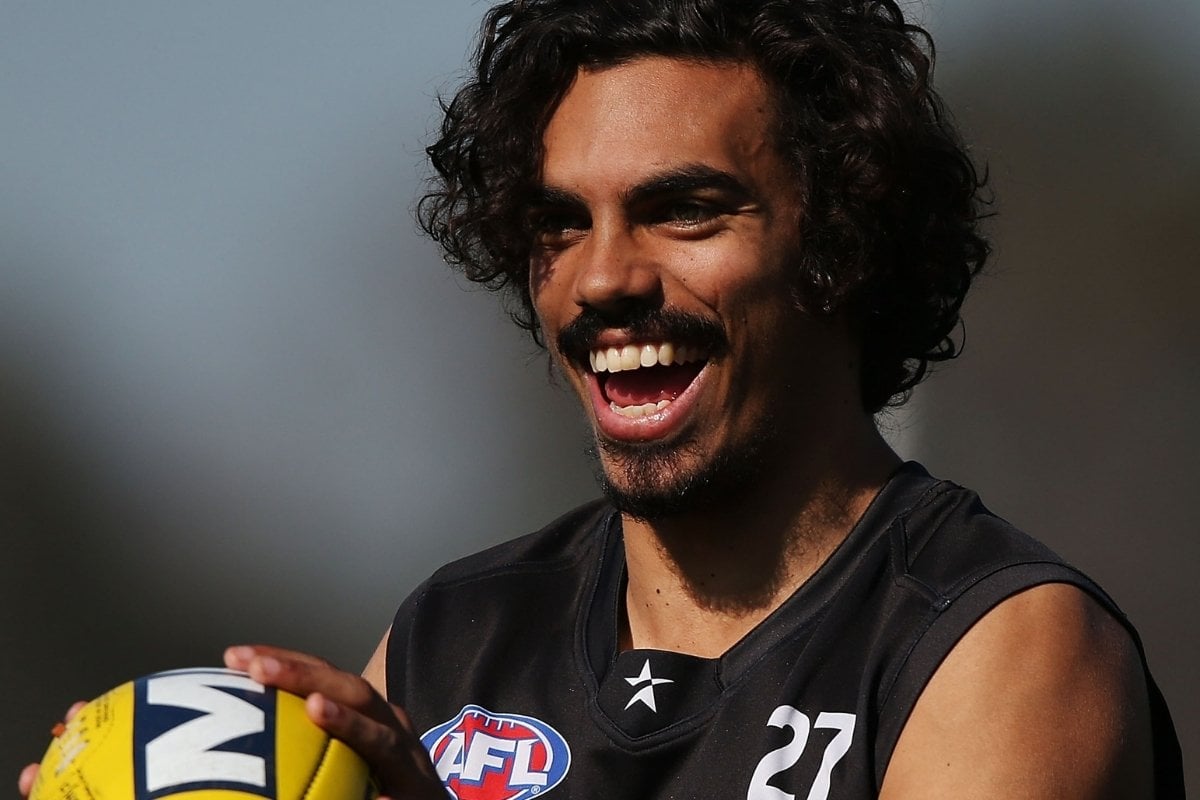 Tony played in the AFL between 2010 and 2015. Image: Getty. Once, while jogging in Princes Park, Melbourne, he noticed two young teenagers watching him. As he approached, he knew they were going to say something. He could feel it coming.

"They said, 'Run faster! The cops are chasing you!'

"And I'm like, f**king hell, man. It really took the wind out of my sails because they knew exactly what that meant.

"I was just like, what do I do? Do I stop to blow up at them? Of course not. Because everyone's just going to think I'm a bully.

"That one really rocked me... I was just like the arrogance, the entitlement. And then also, what are they around? What is in their sphere, what language are they hearing at home or in the schoolyard for that to come out? It sucks."

Listen to more of Tony Armstrong's story, including his strong relationship with his mother and how his soaring public profile is impacting his dating life, on No Filter.

It's incidents like that, and many others far more insidious, that have encouraged him to use his platform like he does.

But as he's said many times, he longs for the day where he and other Indigenous people in the public eye don't have to bear the burden of educating Australians about persistent discrimination and disadvantage, where those simple, uncomfortable truths generate action rather than headlines and debate.

Tony is relatively new to the world of TV presenting.

While still playing AFL, he was asked to provide some comments for the National Indigenous Radio Service - a government-funded satellite program sent to Indigenous radio stations across the country.

And from that moment Tony realised he "seemed to have a bit of a knack for it".

He became the first Indigenous person to call an AFL game on commercial radio in 2019. In early 2020, he began filling in for sports presenter Paul Kennedy on the ABC's News Breakfast show. Then in 2021, he was given the full-time role, which he has made his own. And this year, he hosted his own show on ABC called A Dog's World. He also has a panellist role on The Project from time to time too.

And at the 2022 Logies this week, Tony won the TV Week Logie Award for most popular new talent. He also took to the stage with tennis player Dylan Alcott, the pair presenting an award together for the most outstanding sports coverage.

Shut up bro. I’m a blackfulla and I am duty bound to respect the land I’m on.

It took a few phone calls and some door knocking but we found him...

In his speech, Tony said: "There is a lot of people I need to thank end. The old cheese, my mum, she is a superstar, has done everything for me and has been a superstar and I would not be up here without her so a big thanks to her and please give her a clap, she will love it back home."

And the response was overwhelmingly.

In his speech, Tony also thanked the National Indigenous Radio Service, saying: "If I hadn't started calling AFL football, I wouldn't have ended up here at the ABC."

Reflecting on the award-win on News Breakfast, Tony said: "I'm pretty overwhelmed. Clearly a lot of people voted, so it's a really nice feeling. I feel warm and fuzzy. Thank you so much for all the support you gave me along the way. It hasn't really sunk in yet."

Reply
Upvote
2 upvotes
The schools are doing well in education of indigenous culture now (compared to when I was little), but there still seems to be some hesitation to teach kids about what indigenous Australians have endured due to colonization. My 5 year old son seemed to have this idea that aboriginal people invited Europeans to Australia and it was a very peaceful process. I had to explain that wasn’t really the case.
L
laura__palmer 10 months ago

Reply
Upvote
6 upvotes
As a white person, I think it's important to stand back and listen to the voices of non-white people. And, when you do that, it's plain to see that Australia is a racist country and has a long way to go to right all the wrongs. If your first instinct is to contradict lived experiences and take offence, then you are part of the problem.
News
General
Opinion
True Crime
Politics
Sport
Explainer
Entertainment
Celebrity
Reality TV
Movies
TV
Books
Rogue
Royal
Lifestyle
Beauty
Fashion
Weddings
Home
Wellness
Health
Fitness
Travel
Food
Family
Before The Bump
Pregnancy
Baby
Kids
Teens
School
Parent Opinion
Work & Money
Money
Finance
Career
Lady Startup
Relationships
Sex
Dating
Separation
Friendship
Family
Real Life
Couples