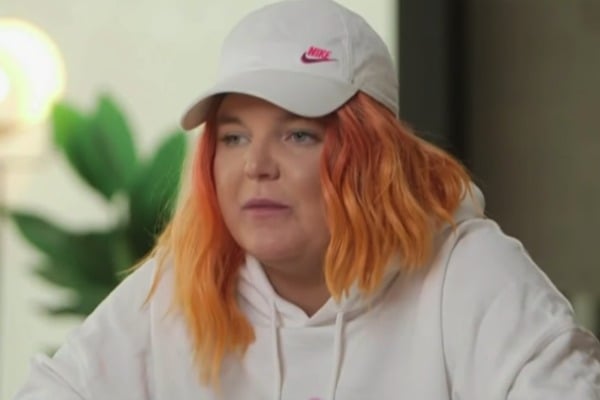 “To be able to wake up in your van at a hostel with all your friends. Have breakfast together out in the garden, go to the beach for the day. Set up your equipment as the sun sets and play for six hours to a crowd of people that are jumping, dancing, singing along.”

Busking in Byron Bay is the happiest Toni Watson (or Tones and I as the world now knows her) has ever been. She wasn’t famous. She wasn’t rich. And only locals knew her name.

Now Tones and I is an international superstar with a net worth of more than a million dollars. But six months into her fame, she realised she hadn’t had a single happy day.

Watch: Carrie Bickmore’s revealing interview with Tones and I on The Project. Post continues after video.

Last year, Toni was catapulted into the limelight after her hit Dance Monkey reached number one on the official music charts in more than 30 countries.

She went from singing on the streets of NSW’s Byron Bay to opening Splendour in the Grass 2019. It’s an incredible achievement she still struggles to wrap her head around.

“The Splendour in the Grass video to busking is only three months apart,” she told The Project on Wednesday night. “I had no idea what was about to happen. I was happy and content and I loved busking.”

“That was easily the best time of my life,” she added.

For the people that don’t know my story, I was living out of my van and I was a full time street performer//busker until April this year. Every Tuesday I would play at the @the_arts_factory_lodge talent show. It’s where I first played dance monkey and it’s where I really found my feet in music. To say thank you, THIS SUNDAY I’m going back and playing my last show there (sad)! It’s $5 on the door and all the money will go back to the arts factory. There is limited space so first in best dressed. The show will kick off at 5:30 but I will have another talented busker played 4:30. I love you Byron bay, I love you arts factory. Let’s make it big for old times ❤️❤️❤️

In November last year, the 26-year-old won four ARIA awards, including Best Female Artist. She was universally lauded for the stirring acceptance speech she gave, telling the crowd: “Thank you for letting me know that I’m OK just the way I am.”

The next day, however, she woke up and felt sad.

“I had this overwhelming sadness and not wanting to celebrate it,” she told The Hit Network’s Carrie & Tommy on Wednesday. “I was like, ‘Why am I not happy, this is meant to be exciting.’”

Days later she posted on social media about her pain.

"I don’t want to take anything away from my well-deserved achievements and to my fans I love you unconditionally but I have been hiding a big black hole for a while now and feel if I hide it like most artists do then how are we going to help the next generations of young artist to come?" she wrote.

"Truth is (and we have all seen it) with success comes judgement and opinions, this I was prepared for, it’s normal (which is sickening) but the relentless bullying that follows every proud moment tears my mind in two."

Toni described her rise to fame as living through the "best and worst time" of her life.

"Six months into everything I said to myself, I don't think I've been happy one day since all this stuff has happened," she told The Project from lockdown, where she's been able to escape the realities of fame for a while.

Toni misses the freedom of her busking days. Of being able to play where and when she wants. Now she's expected to work to other people's timetables and show up to fancy parties with the rich and famous.

"I went to one party in Beverly Hills in this rooftop fancy thingy... and it was too fancy for me. Everyone there was someone," she said. "I ended up leaving and going back to watch Netflix in the hotel room."

Becoming famous has made Toni realise it's not all it's cracked up to be, and it's definitely not what's important.

"There's so much more to life than just achieving your dream career. You want to be healthy, you want to have good friendships, you want to be a good person - which is the most important thing," she told The Project.

Parents of 0 to 5 year olds, need an impossible quick break from the kiddies? Take our short survey now.

Reply
Upvote
2 upvotes
Hope that Toni finds her feet and then her path; I think that she's already achieved her aim to be a good person.
Z
Zepgirl 2 years ago