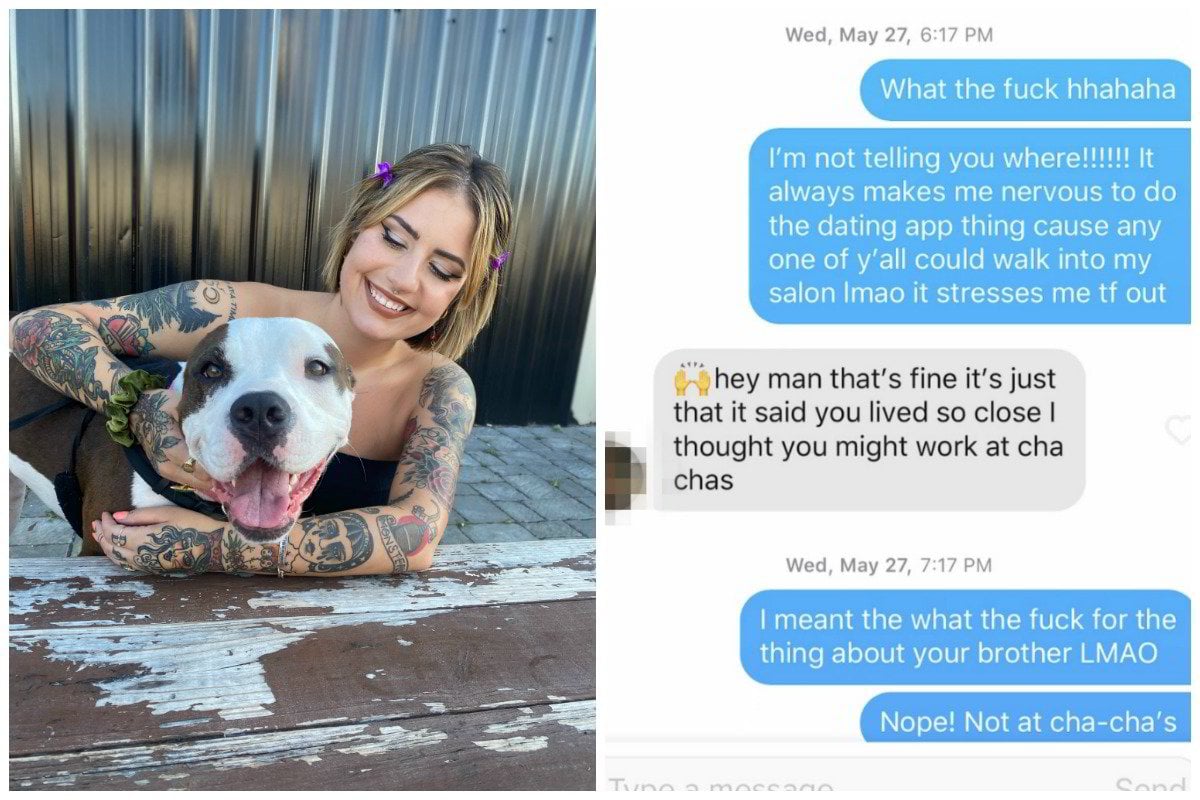 Something really terrifying happened to me at my work (at a hairdressing salon) last week.

A few months ago, I was trying out my luck on dating apps.

I eventually stopped responding to messages, stopped looking at the apps, and in the end just deleted them altogether.

Then today, while at my work, I saw a man walk in and out of the salon without calling ahead, a new rule we have in place due to COVID-19. I figured it was just a random new client that didn’t know better and went about my business.

A little while later, I went up to the front desk to check my books. As I was sitting behind the desk, the same man I had seen previously walked in the door without calling, again, and walked directly up to me.

Man: "I’ve been trying to get a hold of you for a while."

And this is where I completely blank and have NO idea what the hell he’s talking about. I haven’t been on any dating apps in months.

I look at him confused, trying to still be polite.

He pulls his mask down so I can see his face, and I still don't recognise him.

Man: "Yeah you said this would be your worst nightmare but I’ve been trying to get a hold of you so I figured I’d just try to get an hour of your time."

And that’s when I realised who he was.

A man on Tinder back in May had asked where I worked. I told him I was uncomfortable disclosing that information to men on the internet. Once I realised what was happening... I immediately started sweating and my heart was racing. My arm hair was standing up.

Man: "Yeah they told me, I’ve just been trying to get a hold of you."

Man: "How come you never messaged back?"

Man: "Did you, really? Or are you just saying that?"

I never told this man where I worked.

In fact, I explicitly told him that I would NOT tell him, and that it would be my worst nightmare for someone to just show up at my job. I have no idea how he tracked me down, as none of my social media even had any of the same names-first or last.

He chose to show up anyway. 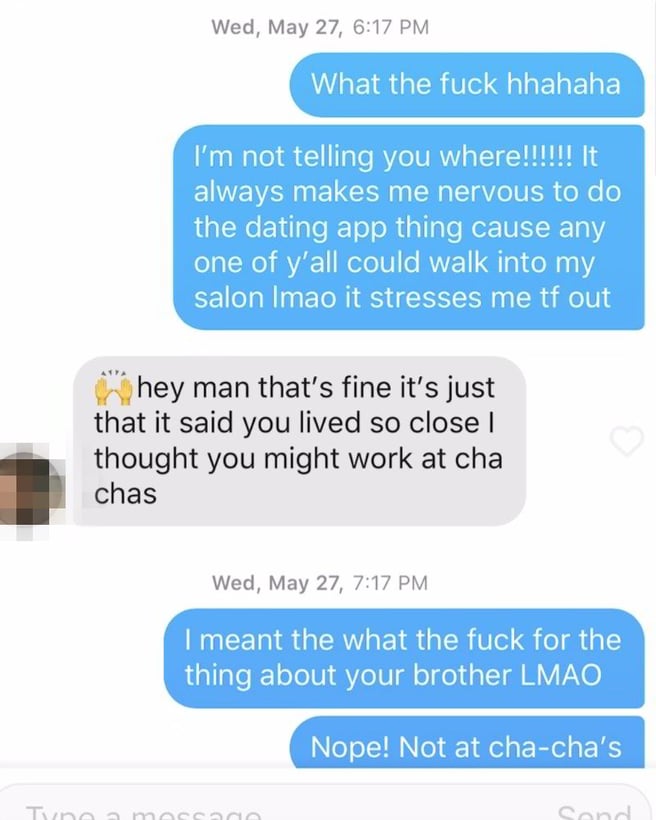 I had never met this man.

But he felt comfortable and entitled enough to me – a woman he had never met – to show up at my JOB. Demanding my time? Demanding to know if I was lying about meeting someone?

I walked away hot and sweaty and scared. How did he find me? Why did he show up at my job, out of the blue months later? What was this supposed to accomplish? What if I had gone on a date with him?

Have I been stalked?

This man stalked me.

After asking me to let him know the next time I choose to delete Tinder, the man left.

I immediately walked to the back of the salon and shakily grabbed my phone to call my girlfriend and tell her what happened.

At the end of my shift, a coworker pulled my car around to the front so I wouldn’t have to walk out the back.

Another colleague walked out with me.

I drove around for a while before heading home in case he followed me and called my girlfriend the second I was home safe with locked doors.

I asked her if she thought I should call the police.

Does it even matter?

But what if this happened again? What if he did this to someone else?

I called the non-emergency number the next day.

The officer I spoke to said no crime was committed and ended the call with "good luck to ya."

He lacked any empathy for what I was telling him until I became emotional. Only then did I hear any kindness in his voice.

It was just as I had anticipated.

I shared my story on my Facebook page in hopes of warning other women in my area about this guy. I made the post public.

Thanks to the attention my shared post received, multiple individuals with connections to my local police department reached out to me about the situation.

I finally got to talk to someone that took me seriously. A former homicide/sex crimes detective that now works in stalking and harassment.

He explained that what happened definitely qualifies as stalking/harassment and I have every right to be frightened by this man and furious with the police for how it was handled.

He actually called my stalker and had to have a 50 minute conversation with him about why what he did was not okay.

He explained how he found me – he used the Tinder distance locater to narrow down the salons near him.

He looked at the websites for each salon in his vicinity.

This is where is gets really weird, and to best tell the story, I’m going to jump into the exact words the detective used:

In response, the man explained he felt offended for being "left on read" or ghosted.

The officer explained to him that even if that's the case, he had no right to stalk me to the point of showing up at my place of work three months later. The officer said he believes in Jake’s head that it might be like a rom-com where the guy just shows up and gets the girl.

I have decided to pursue legal action.

I have to sit in a courtroom next week and tell this man and a judge the way this interaction has affected me.

Like how I still don’t drive straight home after work.

Or how for three nights last week I didn’t sleep until the sun came up because my roommate wasn’t home and I was scared to let my guard down.

But I am so glad I refused to back down. Women deserve to feel safe and be heard.

I refuse to go down easy.

*Name has been changed to protect anonymity.

Reply
Upvote
I went to meet up with a guy years ago who I’d met online. He was an hour late or more so I text him not to worry about coming. I ate my lunch and went to leave and the guy showed up. I’d told my dad where I was so called him and he stayed on the phone until I was safely locked in my car. The guy actually followed me to my car. Over the following weeks, I had several hundred missed calls and messages from this guy. Imagine if he hadn’t been late. Imagine if maybe I hadn’t realised he was like that and started dating him. Terrifying. Eventually I changed my number and that was the end of that. Scary.
S
simple simon 2 years ago

Reply
Upvote
Not just rom-coms. There was an episode of Seinfeld where Jerry met a woman socially, and wanted to see her again. So he found out where she worked and he and George hung out outside waiting for her.
I remember at the time thinking that was creepy.