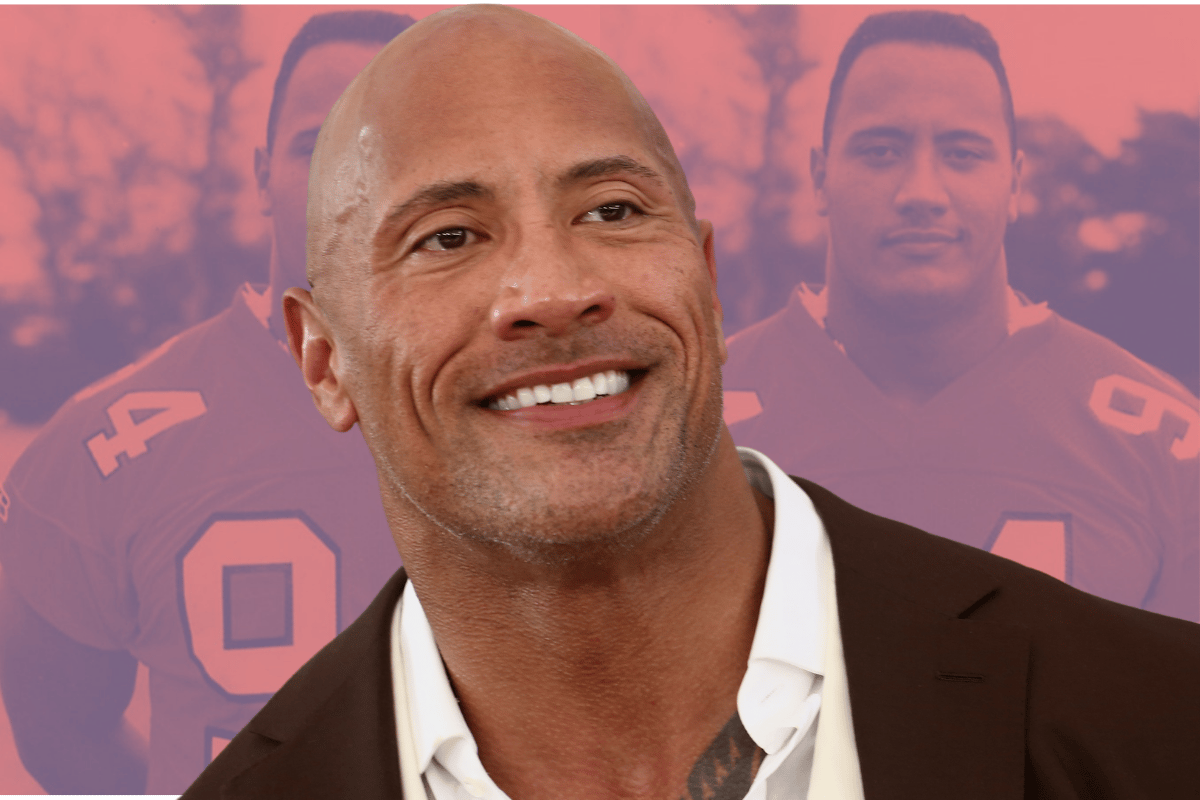 Dwayne 'The Rock' Johnson has had many lives.

He's been the barrelling action movie star with rippling biceps and a world-famous smile. He's been The Rock – 'The People's Champ' – one of the WWE's biggest superstars. And he's been Dwayne Johnson, a burly football player who was nicknamed 'Dewey' by his teammates.

But long before Johnson became the world's highest-paid male actor, the 49-year-old was living a drastically different life.

Watch the trailer for Young Rock below. Post continues after video.

Moving around the country – and even internationally – was challenging.

"I was always the new kid so that made me a target," he told news.com.au.

"We moved so much that we lived in 14 different states because my dad was on the road which was unsettling and disorientating. I used to get into a lot of fights. I wouldn't start them, but you know when you're the new kid."

When Johnson was 14, the actor came home to find an eviction notice on the door to his family's one-bedroom apartment in Hawaii.

"We were living in an efficiency [studio] that cost $120 a week," Johnson told The Hollywood Reporter in 2014.

"We come home, and there’s a padlock on the door and an eviction notice. My mum starts bawling. She just started crying and breaking down. 'Where are we going to live? What are we going to do?'" 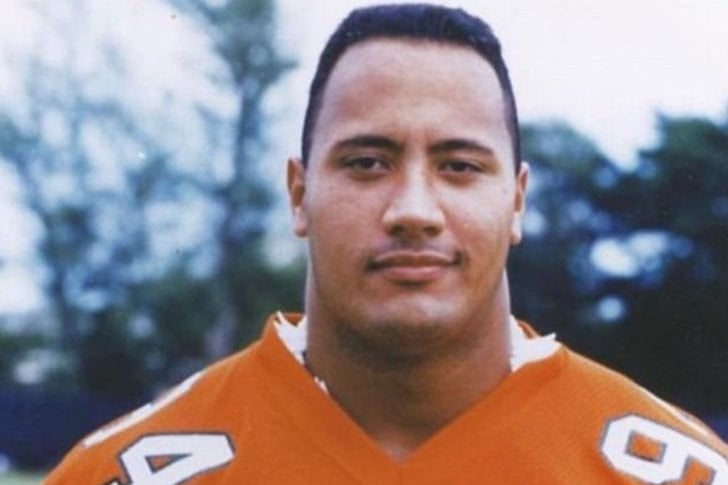 Around that same time, Johnson turned to petty crime. In fact, by the time he was 17 years old, Johnson had been arrested "eight or nine times".

"Thirteen is when I started to veer off the tracks," he recently told The Sun.

"I started getting arrested for fighting, theft, all kinds of stupid [stuff] that I shouldn’t have been doing," he added.

At 15, Johnson faced another emotional challenge when his mother, Ata, attempted suicide.

"She got out of the car on Interstate 65 in Nashville and walked into oncoming traffic," he told Express.

"Big rigs and cars were swerving out of the way. I grabbed her and pulled her back on the gravel shoulder of the road.

"What's crazy about that suicide attempt is that to this day, she has no recollection of it."

In his later years of high school, however, a man changed Dwayne Johnson's life forever.

"My grades got better, and I started getting recruited from every college across the country," Johnson said, according to The Profile. "My thought process started to change. That’s when I started thinking about goals and what I wanted to accomplish."

After receiving offers from several colleges, Johnson decided on a full football scholarship from the University of Miami, where he studied a Bachelor of General Studies in criminology and physiology.

While Johnson was passed over by the NFL after college, the then 24-year-old was signed by the Calgary Stampeders in the Canadian Football League.

But Johnson's football career was cut just two months into the season after he suffered several injuries.

"I had just seven bucks in my pocket, I had nowhere to live and I had to move back into my parents' house and that was a low blow," he told news.com.au. "I was lost, I didn’t know where I was going to go, what was going to come next because I couldn’t see a future."

Afterwards, Johnson, who had also recently separated from his girlfriend, struggled with depression.

"That was my absolute worst time," he told Express.

"I reached a point where I didn't want to do a thing or go anywhere. I was crying constantly."

After moving back in with his parents, Johnson turned his attention to following his father's footsteps in the world of wrestling. 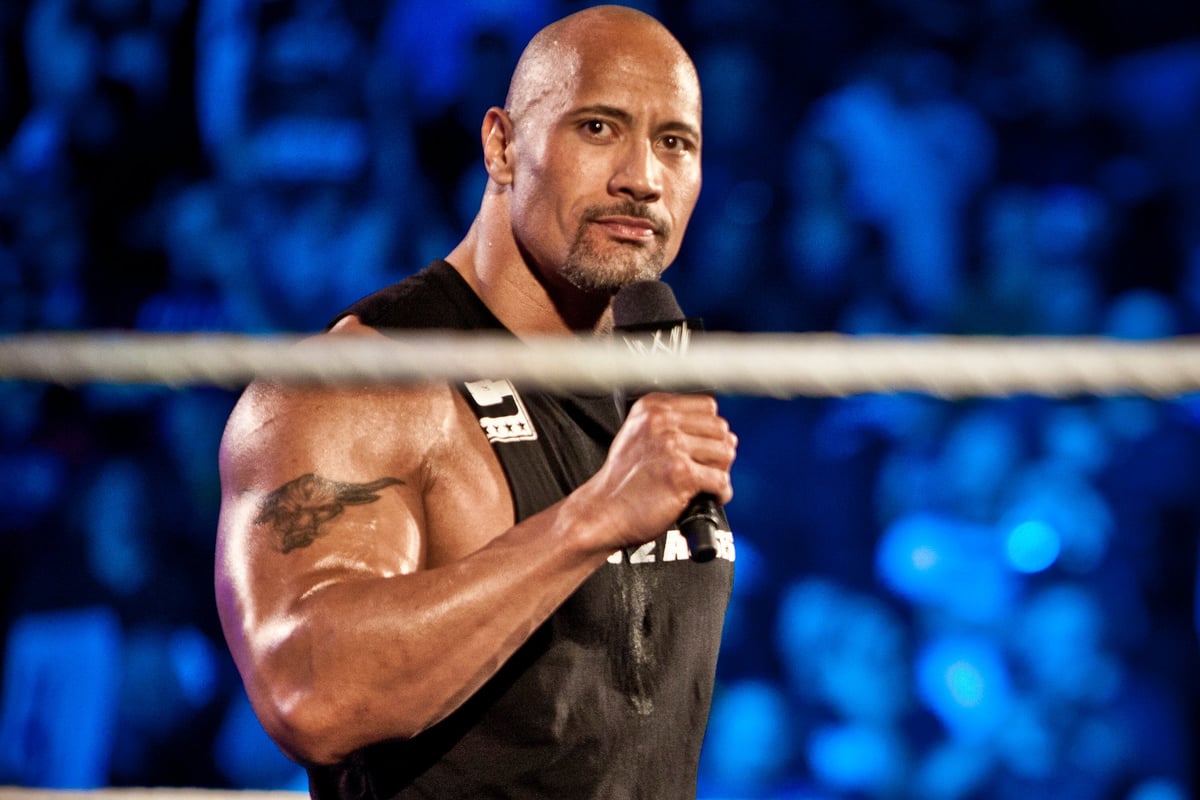 Image: Getty. At first, Johnson's father was against his career plans.

"Looking back, I understand that he was thinking, 'Man, I wrestled for 40 years, and this is what I have to show for it: a tiny apartment in Tampa. I don't want this for you,'" the 49-year-old told Fortune.

But in 1996, Johnson made his World Wrestling Federation (WWF) debut under the name 'Rocky Maivia', a combination of his father and grandfather's wrestling names.

As a clean-cut, baby-faced newcomer, Johnson wasn't exactly favoured by fans at first.

But after taking a short break from wrestling due to a knee injury, Johnson returned to the WWF with a newfound focus. 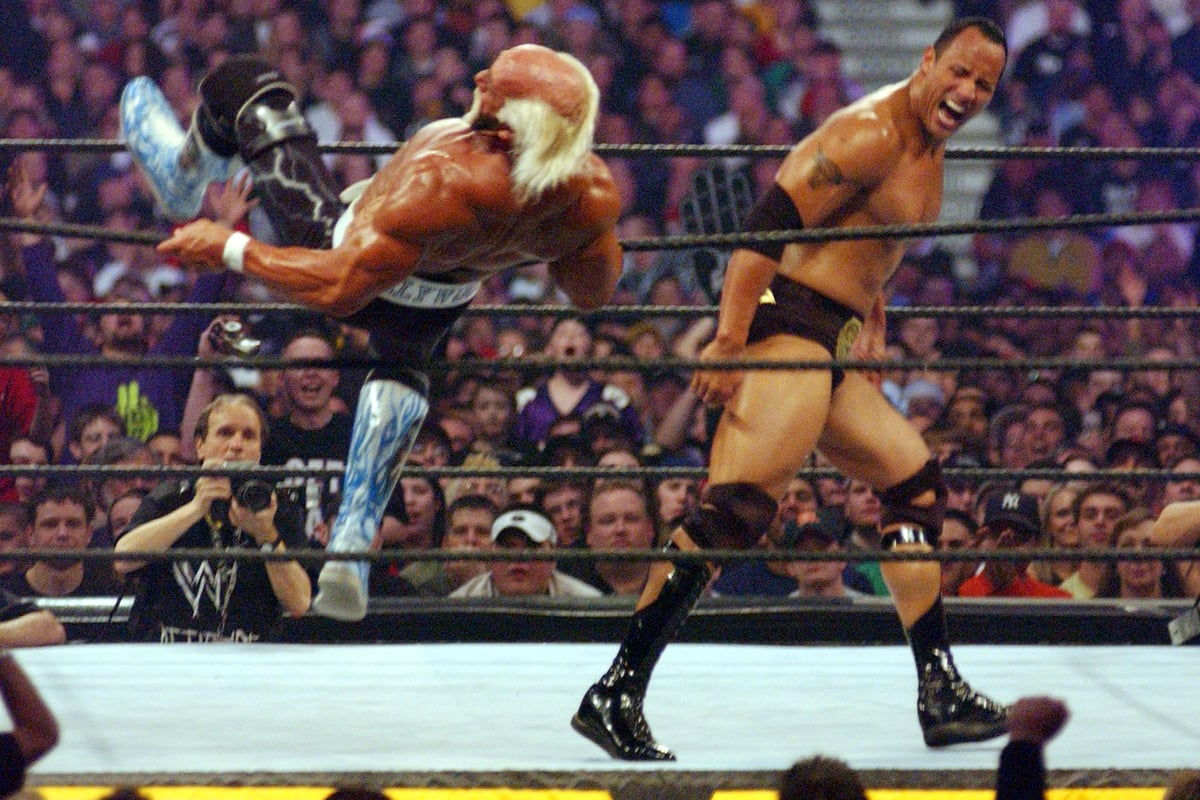 Hulk Hogan and The Rock at Wrestlemania X8. Image: Getty.

Upon his return, Johnson appeared on Monday Night Raw, standing in front of the jeering audience.

"I grabbed the microphone. Fans were already booing. They started chanting, 'Rocky sucks'," Johnson recalled, according to The Huffington Post.

From that moment forward, Johnson became one of the most beloved antagonists in the WWE. Now, Johnson was known as 'The Rock' – an arrogant, brash, bad guy who talked about himself in the third person. A character that referred to himself as the "People's Champion", purely to rile up viewers.

In the years that followed, The Rock dominated the world of wrestling, becoming one of the most-loved figures in the WWE (the rebranded name for the WWF).

He wrested in the WWE for eight years, winning countless championships and headlining the most-bought professional wrestling pay-per-view in history.

But much like other notable wrestlers, including Hulk Hogan, Johnson desired a career outside the ring.

In 2001, Johnson got his start in Hollywood in The Mummy Returns. 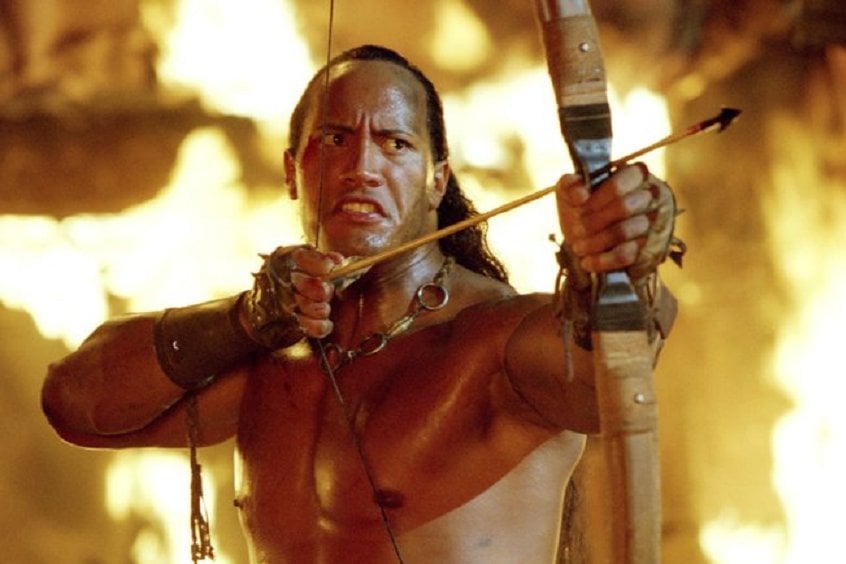 Image: Universal Pictures. As Kotaku put it: "Casting The Rock as an unintelligible half-naked warrior who later turns into a half-man, half-scorpion monster painted with some truly awful early 21st century CGI was pretty much the perfect way to introduce the man to the non-WWE watching universe."

Although Johnson's role in the film was minor, it led to further opportunities, including a sequel made specifically for his character: The Scorpion King.

After retiring from wrestling in 2004, the actor went on the appear in countless roles including Tooth Fairy, The Other Guys, Fast & Furious 6, Hercules, Baywatch, Jumanji, Moana, and Journey 2: The Mysterious Island, sending him on the path to becoming the highest paid male actor in the world.

As for his family life, Johnson married Dany Garcia in 1997, before welcoming their daughter, Simone Alexandra, in 2001.

While the couple have since divorced, Garcia still manages Johnson's career as well as his Seven Bucks Production Company. 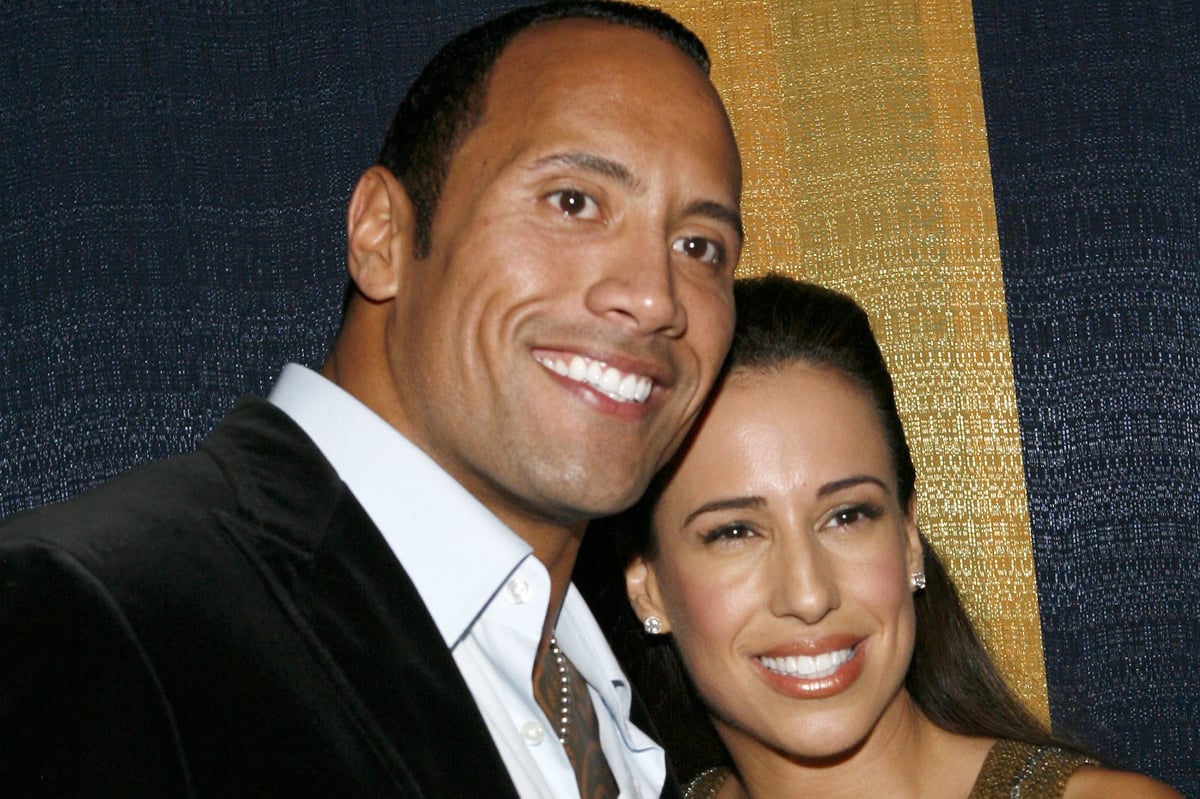 Dwayne The Rock Johnson and Dany Garcia. Image: Getty. "His drive isn't any different than when I met him when he was 18 years old," Garcia told the LA Times. "He was born that way. He's going to die that way, if he ever dies. But he's always had this level of excitement to do more. Like, 'What else can we bring?' It's never, 'Woo-ha! What else can I crush?'"

They have two daughters together – Jasmine, five, and Tiana, three. 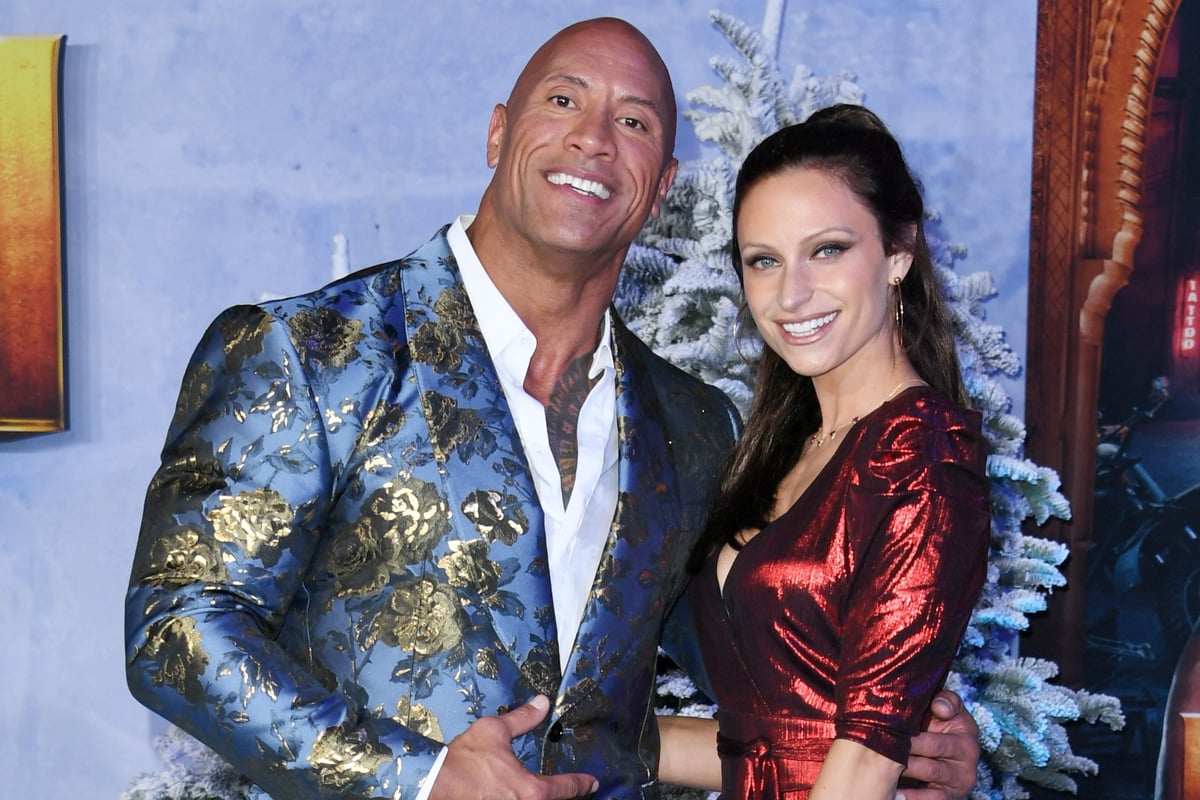 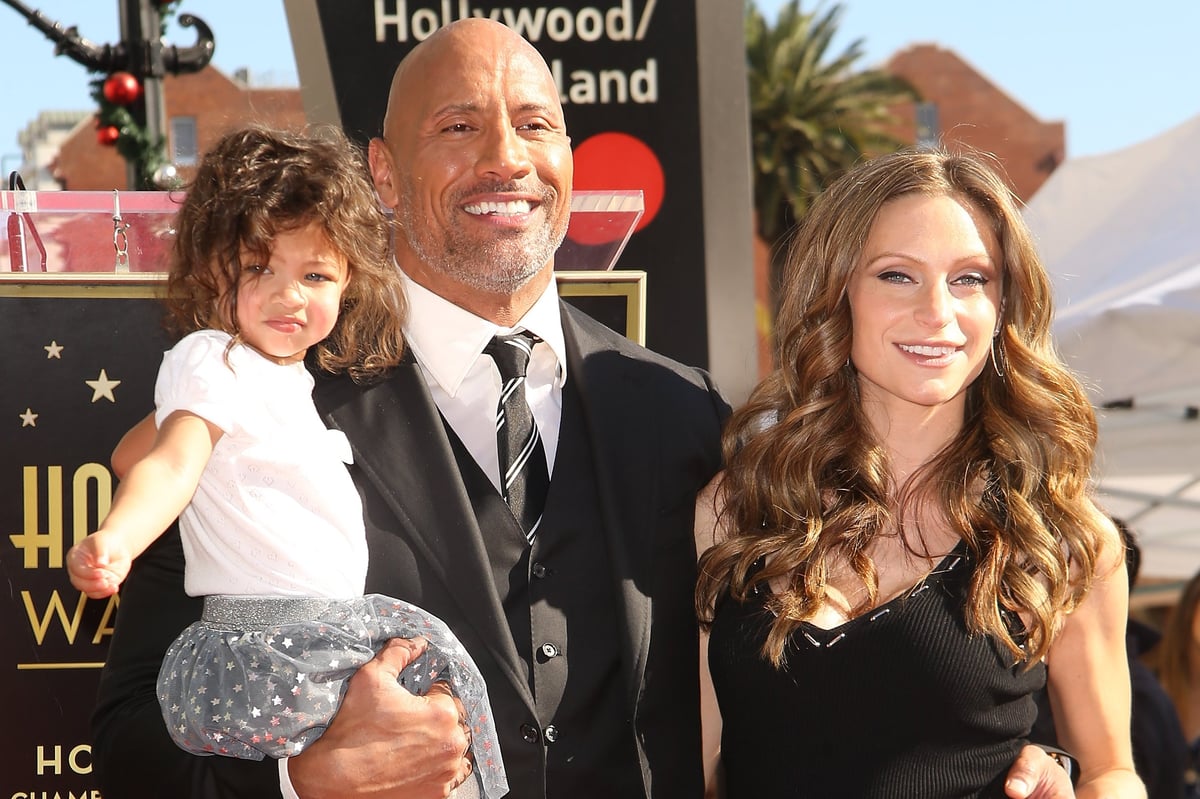 Dwayne and Lauren with their daughter Jasmine in 2017. Image: Getty. Now, after just over two decades in the public eye, The Rock's career has grown astronomically.

In fact, The Rock now has an estimated net worth of US$400 million. And with over 233 million Instagram followers, he's one of the most-loved actors of the 21st century.

It's something Johnson himself has attributed to his childhood and the tough times he endured.

"I know what it’s like to struggle, have no money whatsoever," he told news.com.au.

"I like to keep those times close to my heart and that helps me not so much achieve success, but to appreciate it, and never take it for granted."