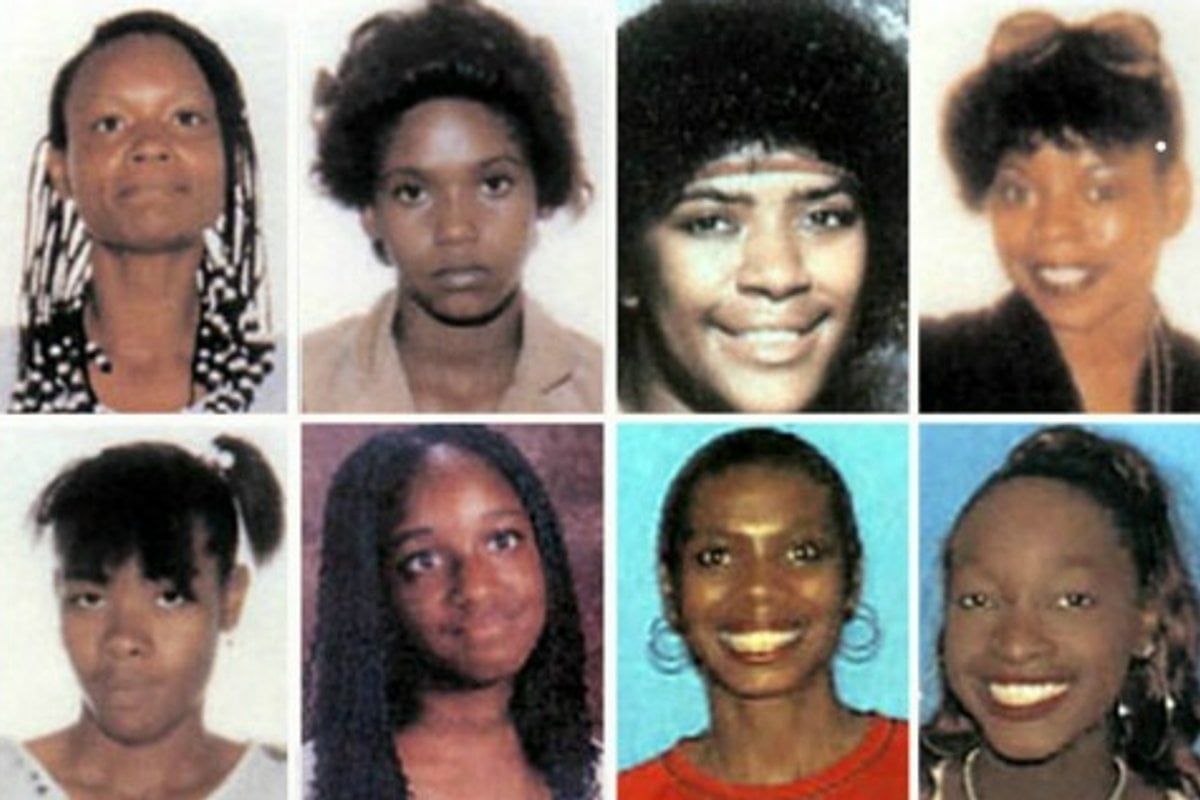 Janecia Peters’ four-year-old son had a Christmas present for his mum.

He’d wrapped it himself, in aluminium foil and red rope. But the little boy never got a chance to give his mum the present.

Janecia’s body, naked except for a gold heart pendant, was found in a skip bin by a homeless man looking for cans.

The following year, Janecia’s mother Laverne spoke to investigative journalist Christine Pelisek at the LA Weekly, pointing out that police had gone “all the way to Aruba” to investigate the Natalee Holloway murder, but hadn’t even offered a reward for finding her daughter’s killer.

“I am just a mother who wishes they would say something about my daughter, like they say about every other kid,” she said.

It was only through the LA Weekly’s article in 2008 that people in LA found out there was a serial killer in their midst.

The article gave him a name, the Grim Sleeper, because he’d started his murder spree in the 1980s and then, apparently, taken a 14-year break before starting up again.

His seven known 1980s female victims included 18-year-old Alicia Alexander, who’d been an ice skater and a cheerleader at high school, 26-year-old Mary Lowe, who her family remembered as a “free spirit” and a great dancer, and 34-year-old Henrietta Wright, who had a young daughter, Rochell.

They’d all been dumped like trash after being murdered, some wrapped in old carpets or hidden under discarded mattresses in alleys.

All the victims were black. Some were sex workers or were struggling with drug addiction.

One woman got away. Enietra Washington, then a 30-year-old mother of two, had been walking to a friend’s house one evening in 1988 when a neatly dressed, polite man in a car had offered her a lift. After some hesitation, she’d accepted.

The man shot her in the chest, raped her and took a Polaroid photo of her. She begged him to take her to hospital, but he refused.

“I said, ‘If I die I am going to haunt you’,” she later remembered.

Drifting in and out of consciousness, she managed to grab the door handle.

He pushed her, and she fell onto the street. She got up and dragged herself to her friend’s house. Her friends’ kids, terrified at the blood-covered woman out the front, wouldn’t let her in, but eventually, her friend arrived home.

Police discovered the bullet that was removed from her chest came from the same gun that had killed seven other women. But they didn’t tell her.

LA had a notoriously high murder rate in the 1980s.

Listen to Mamamia's True Crime Conversations, which features interviews with experts on the world's most fascinating, terrifying and mysterious crimes. Post continues after podcast.

However, things were a lot quieter by 2005, when DNA testing showed the same serial killer had resumed his spree, murdering 15-year-old Princess Berthomieux and 35-year-old Valerie McCorvey.

“I thought, ‘holy s**t,’” Detective Cliff Shepard told the LA Weekly. “This guy is out there working. I was not expecting that.”

Here was California’s longest-operating serial killer. But police didn’t set up a task force. They didn’t even warn people.

It was only after the murder of Janecia Peters that a task force was set up, and only after the media revealed there was a serial killer at work that a reward was offered.

In 2009, 28-year-old Christopher Franklin was arrested for carrying a weapon and had to give his DNA to police.

Finally, they had something. They could see that he was related to the Grim Sleeper.

Detectives followed his father, Lonnie Franklin, to a pizza restaurant.

One detective posed as a waiter and collected his plate, cups and fork, as well as a leftover bit of pizza. His DNA was a match.

When detectives searched his property, they found photos and videos of almost 200 women, some naked, some unconscious, including the photo taken of Enietra Washington after she had been raped and shot.

They found the gun that had been used to kill Janecia Peters. They found ID belonging to 18-year-old Ayellah Marshall and 29-year-old Rolenia Morris, who had both gone missing in 2005.

Lonnie Franklin had been an army corporal and had briefly worked for the police as a garage attendant, but in recent years, had been a trash collector. He had been married for 32 years.

He was convicted on 10 counts of murder and one count of attempted murder and sentenced to death.

Enietra Washington looked him in the eye in court and told him: “You are truly a piece of evil.”

Laverne Peters said he’d taken her daughter, murdered her and put her in a plastic bag “like she was trash”.

“My hope is that he spends the rest of his glory days in his jail cell, which will become his trash bag.”

The 2014 Nick Broomfield documentary Tales Of The Grim Sleeper looked at why it took police so long to find the serial killer, or even to warn people that he was out there.

“This film is a story of disposable human beings,” Broomfield told Vanity Fair.

According to the doco, police officers would use the unofficial acronym NHI, or “no humans involved”, to describe the deaths of sex workers and drug addicts, such as some of the Grim Sleeper’s victims.

Lonnie Franklin’s son Christopher said in the doco that there were police officers who wanted to shake his hand when they found out he was the son of the Grim Sleeper.

“Christopher told me his father had a lot of fans in law enforcement,” Broomfield said. “Some police officers actually admired Lonnie for ‘cleaning up the streets’.”

f this post brings up any issues for you, or if you just feel like you need to speak to someone, please call 1800 RESPECT (1800 737 732) – the national sexual assault, domestic and family violence counselling service. It doesn’t matter where you live, they will take your call and, if need be, refer you to a service closer to home.