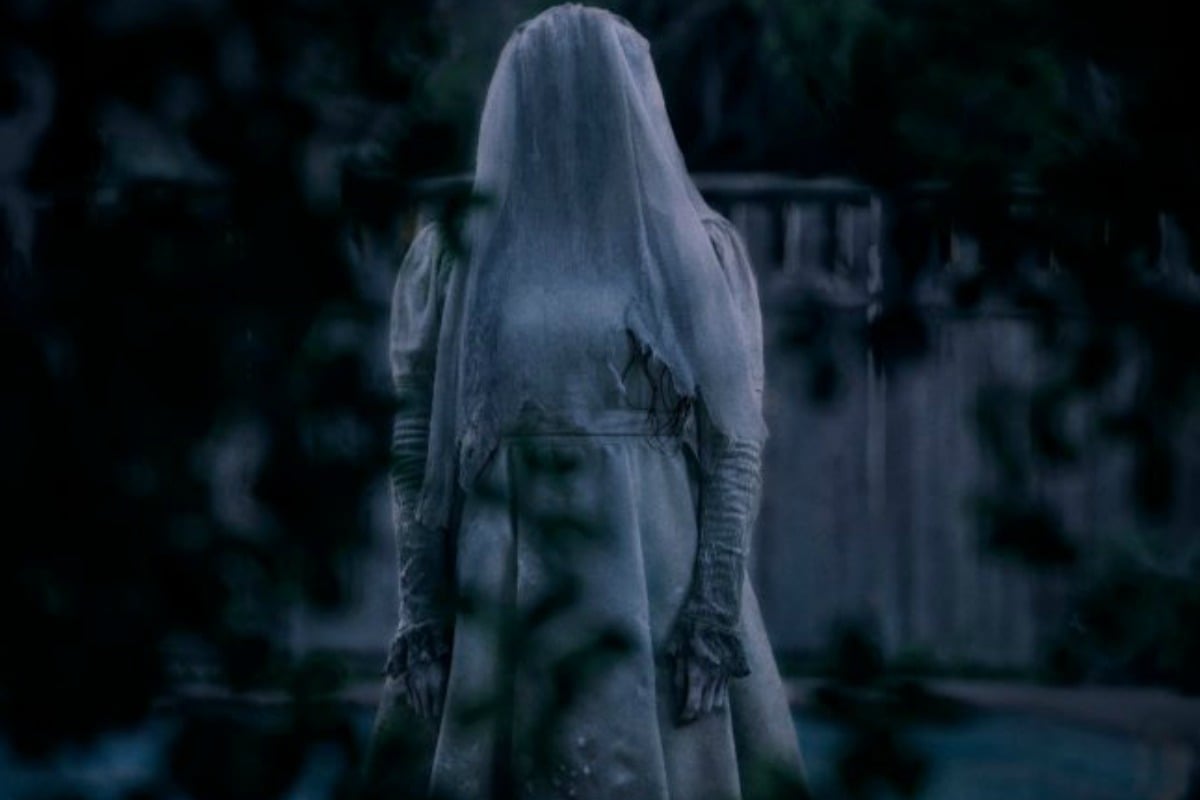 A woman scorned, two dead children, and a wailing woman in white who continues to haunt lakes and rivers in search of her drowned sons.

Behind the jump scare-tastic film, The Curse of the Weeping Woman, is the terrifying Mexican folk tale of La Llorona, a story which continues to be told to Mexican children today.

Watch the trailer for The Curse of the Weeping Woman here:

Taking place in Aztec times, La Llorona was said to be a beautiful peasant woman named Maria who married a wealthier man. Initially they were in love and shared two sons, however he soon became distant. One day, Maria was walking along the river with her children when she saw her husband with a younger woman. In a fit of rage she drowned both her sons in the river, but once she realised her mistake she became inconsolable and spent the rest of her life searching for her sons along the bank, wailing and crying, before she perished too.

There are a few other interpretations of La Llorona.

Some versions paint her to be a neglectful mother who left her children to dance and flirt with men and one night came home to find her sons drowned. While others say she killed her sons in a fit of jealousy and spite because her husband continually paid more attention to them. In another version, La Llorona drowns herself in the river immediately after she realises her sons are dead.

Despite the variations, the story of La Llorona is still told to scare misbehaving children today. Some say the ‘wailing woman in white’ can be heard saying “mis hijos” (my children), while looking for other kids to kill to exchange them for her own. Other interpretations say people hear the cries of La Llorona shortly before they die themselves.

Speaking to Entertainment Tonight, one of the film's stars, Patricia Velasquez, who plays Anna - a mum who loses her children to the curse of La Llorona- says the legend is very much alive.

"I'm Venezuelan but I grew up in Mexico. And La Llorona, this is how Mum got us to make sure we would come back at five, it gets dark, you're inside. Or La Llorona will get you," she said.

"La Llorona is real for us."

"I had someone the other day tell me that La Llorona touched her shoulder. So there's all kinds of stories. If you start asking around, you will be surprised."

Creepier yet, are the real life sightings of the ghost.

According to Legends of America, the "tall wailing spirit" of La Llorona continues to haunt the PERA Building (Public Employees Retirement Association) in Santa Fe, New Mexico, which is said to have been built on a Spanish-Indian graveyard near the Santa Fe River.

"Many people who have been employed there tell of hearing cries resounding through the halls and feeling unseen hands pushing them while on the stairways," writes editor, Kathy Weiser.

They also say a man named Patricio Lugan once spotted the spirit at a creek between Mora and Guadalupita, New Mexico.

"As the family was sitting outside talking, they saw a tall, thin woman walking along the creek. She then seemed to float over the water, started up the hill, and vanished," writes Weiser.

"However, just moments later she re-appeared much closer to them and then disappeared again.

"The family looked for footprints and finding none, had no doubt that the woman they had seen was La Llorona."

Have you watched The Curse of the Weeping Woman? Tell us in a comment below.