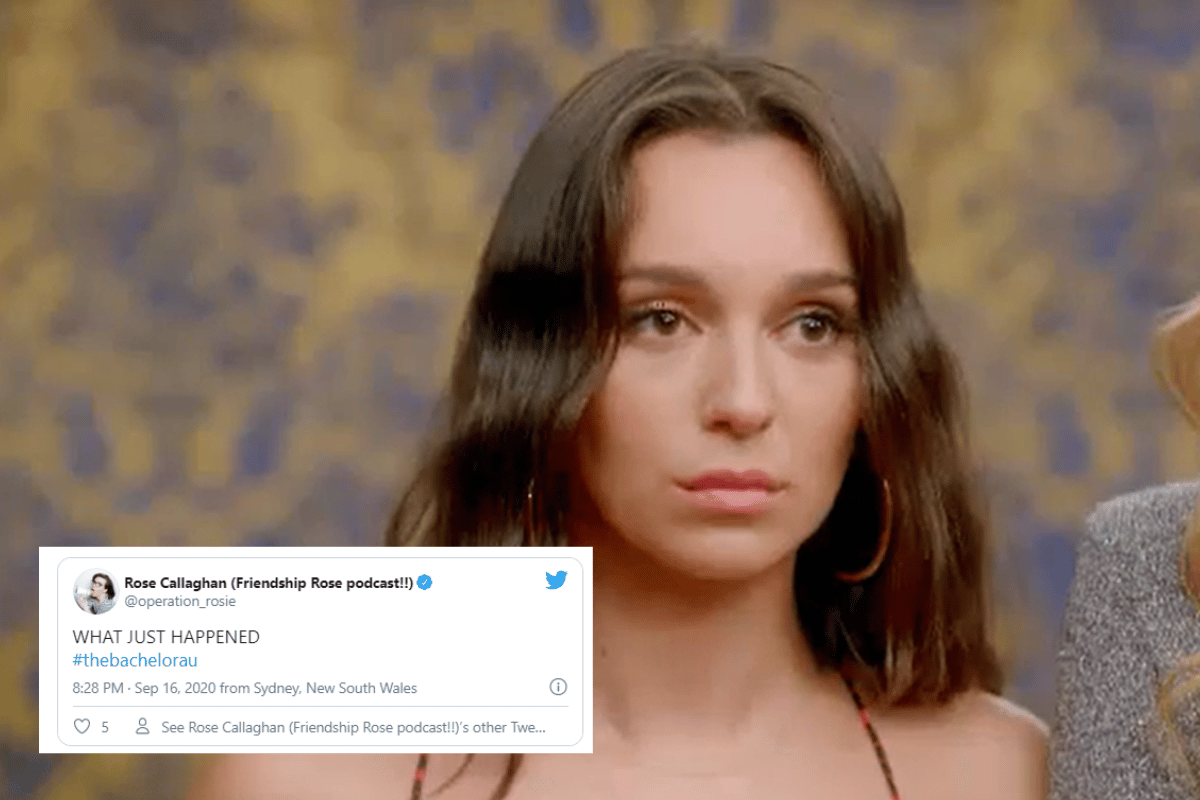 We may have expected a bit of peace in the mansion this week following the epic walkout of Roxi/Rhonda, but that expectation was WELL OFF. Because boy, did The Bachelor deliver on drama tonight.

First, we were greeted to a shocking visual of Locky blindfolded in his undies as the remaining ladies communicated with touch, so they could ~physically reconnect~ after far too many Zoom dates.

Then the beef between Bella and Irena ramped up once again as Irena 'deliberately' scribbled over Bella's kiss on Locky's chest. Irena had some good anatomy comebacks, but ultimately lost the fight and Bella continued to be a sook over the entire episode.

...which didn't bode well when Irena was picked for the coveted single date.

Locky explained that he wanted to take Irena on this date because she's so adventurous/outdoorsy/loves a hike. And let's just say that Bella believes with every bone in her body that this is a LIE.

Bella's fury builds up for the following 50 minutes and then boils over when she's having a chat with Locky at the cocktail party. She tries to explain to him that Irena is manipulating him and isn't really all that outdoorsy, and this side of Bella freaks Locky out big time.

Spoiler alert: Bella very nearly doesn't get a rose, and instead is dragged outside by Locky for a chat mid-rose-ceremony. Things are very tense. Very stressful. And then Bella gets a rose anyway.

But what did the Twittersphere think of all this Bachelor-based drama? We rounded up the best tweets from the evening so you can have a look-see.

2 minutes in and i’m already uncomfortable as fuck #TheBachelorAU

I’m disturbed by you know... touching... during a pandemic... #TheBachelorAU pic.twitter.com/py0l94TmdD

WHY IS THIS MAN IN HIS UNDERWEAR SO OFTEN #TheBachelorAu

Bella getting annoyed about the painted heart but not the kiss???? #TheBachelorAU pic.twitter.com/YsofGX6RfU

Bella: "My kiss was right there and you painted over it"

Irena: "Technically it wasn't on his heart and my heart was on his heard and yours was just to the left"

Bella: "Okay, but you coloured the heart in, over the top of my lips"

me logging in to watch this shit show again after ranting about how i was bored of it last week ugh❤️ #TheBachelorAU pic.twitter.com/BJBnjmKnTx

How did Izzy end up being the big spoon?
The man is so giant he's an entire cutlery drawer. #thebachelorau

When a guy I’ve dated for 7 weeks with 7 other girls asks me if I’d be willing to move to Bali pic.twitter.com/q2lTwBfVWS #TheBachelorAU

THAT WAS CHAOTIC! JULIETTE HAD A FULL ON MOMENT AND LOCKY WAS LIKE lol bye #TheBachelorAU

"I don't want her to get between us," says Bella after directly placing Irena in between them 😅 #TheBachelorAU

Irena being within earshot of Bella bitching about her #TheBachelorAU pic.twitter.com/TjW7XBkEov

Of course she f**king got a rose #TheBachelorAU

What a hot mess #thebachelorau

Maddy & steph after waiting 20 minutes for bella and locky to chat, only for him to pick bella #TheBachelorAU pic.twitter.com/dOv84SuyUq