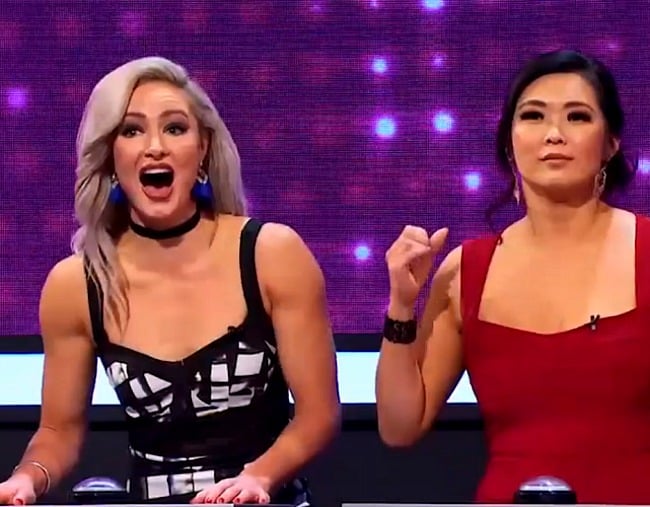 Walking onto the set of a reality TV dating show is very much like stepping through the Gates of Hell.

The rooms are sweltering, bright lights beat down upon you and the twin stenches of debauchery and sin waft through the air and make their way into every fiber of your being.

You’ll also be completely and utterly captivated by all the goings on around you, which is exactly how I felt when I stepped onto the set of Channel Seven’s brand new dating show, Take Me Out.

The set of Take Me Out, which is filmed at Fox Studios in Sydney, looked as if it had been designed by a pair of escapees from My Little Pony, who were unapologetically working off a design found within the pages of a six-year-old’s dream journal.

Everything was bright, shiny and pink, with more flashing lights than a fire engine heading into the mouth of a dangerous natural disaster.

This glorious set-up perfectly set the scene for what we could expect from Aussie TV’s latest voyeuristic offering. A show where once again we are allowed to hide behind a screen and marvel as complete strangers engage in odd pre-mating rituals without feeling an ounce of awkwardness about our behaviour, because it’s all sanctioned entertainment

Before the taping started, our little group of writers was led to the side of the stage to indulge in some light refreshments before we were herded in to take our places within the pink stage set even Barbie would look at and think “…eugh, that’s a little too much.”

(Side note: Say what you will about the struggle of writers, and yes we might go to uni for four years and then never find sustainable employment, but some days you are given free cheese so it all kind of works out in the end).

It was during this little pre-show soiree that Take Me Out Australia host Joel Creasey, one of Australia’s most popular stand-up comedians (or more accurately, according to his Instagram, a “TV presenter, comedian, actor, selfie slut and high class hooker) made his way over to our little group to inform us that the show is “just like The Hunger Games, honestly it’s just a complete blood bath.”

Which just made me even more excited about what we were about to see.

The show kicked off with Creasey descending from the ceiling in a bedazzled elevator, the same elevator which later on in the night would start shooting out a slew of dating hopefuls like some kind of hot human pasta maker.

I was just starting to wonder where these "30, flirty" women were when an explosion of sound and light erupted in the stands behind my seat and suddenly there was a long row of women snaking around the sound stage. They were all dressed to impress, bopping and grinding to the music before making their way precariously down a staircase and onto the stage, all dancing arm-in-arm.

It's hard to know exactly how long they had been standing there, it could have been an hour or maybe even a month judging by their somewhat feverish dancing, but either these ladies all have the stealth skills of perfectly tanned ninjas.

How Take Me Out differs to other reality dating shows is mostly in the speed in which the contestants either get hooked up with a potential life partner or are sent packing. There are no drawn out solo dates, no ludicrous activities to partake in or volatile dinners to sit through.

Basically, the first man was lowered to his potential doom via the aforementioned bedazzled elevator.

Then, the ladies, who were standing behind podiums with their names helpfully plastered across them in case the mix of tension and sexiness caused quick acting amnesia to strike, have the choice to switch off their lights during each "round" of the show.

Pressing the buzzer and causing a "blackout"  signals to the hopeful man that they are in no way interested in his advances, body, or conversation, thank you very much and goodnight, sir.

(I know what you're all thinking, we need these lights for real life situations. Quick, someone get their shit together and pitch this on Shark Tank ASAP).

It's because it's all so rapid fire that things got a little...loose, during the filming of the show and there were a few moments during the process that made me question some of the thought making processes employed by the contestants.

A guy could bust out a sub-par rap routine that was so poorly constructed it wouldn't have got him through the lowest rating season of Australian Idol, yet, on the flip side, a man could politely state that he enjoys the puzzling and ancient art of "reading books" and suddenly all the ladie's lights go out so fast I thought God had struck me down with blindness.

In saying that, however, the contestants are truly the hilarious meat in this TV sandwich, dishing out brilliant one liners and, in what I believe to true reality TV first, do not try to bring each other down in order to claim the top prize.

At the end of each round, the "suitor" is allowed to stroll along the line of podiums and turn off the light of any contestant he does not fancy, therefore eliminating them from their section of the competition.

And, friends, this is where things got truly physical.

All because the women literally threw themselves across each other's podiums in an act of utter sacrifice and bravery, in a bid to stop their friend's lights from being diminished.

It was all just a bit sweet.

Joel Creasey, on the other hand, was pretty much put on earth to host this show. He perfectly treads the line between lightly messing with the contestants and also being their greatest cheerleader. It would not be easy to be the ringmaster of this particular circus, but Creasey deftly pulls it off.

A particular highlight of his reign was when one of the contestants, a self-confessed mystic/psychic/medium starting sweet talking the male contestant by offering to do a reading for him and show him the "death card".

"You're just going off to the Gold Coast together to have some cocktails by the pool," admonished a shocked Creasey. "No one is going to die, love."

Look, yes, I did see some things during the filming of Take Me Out that can never be unseen and that may have tarnished my soul forever, but on the whole it's a rollicking good time.

Australia, if you're into trashtastic shows where lovable bogans and larrikins find their potential soulmates (and, lets be honest, that's all you want to watch) then this might be the show for you.

Take Me Out will premiere on Channel Seven on Monday September 3 and will air on Tuesday nights from then at 7.30pm. You can watch catch-up episodes on 7plus.

For more TV news and reviews, you can follow writer and Mamamia Entertainment Editor Laura Brodnik on Facebook.