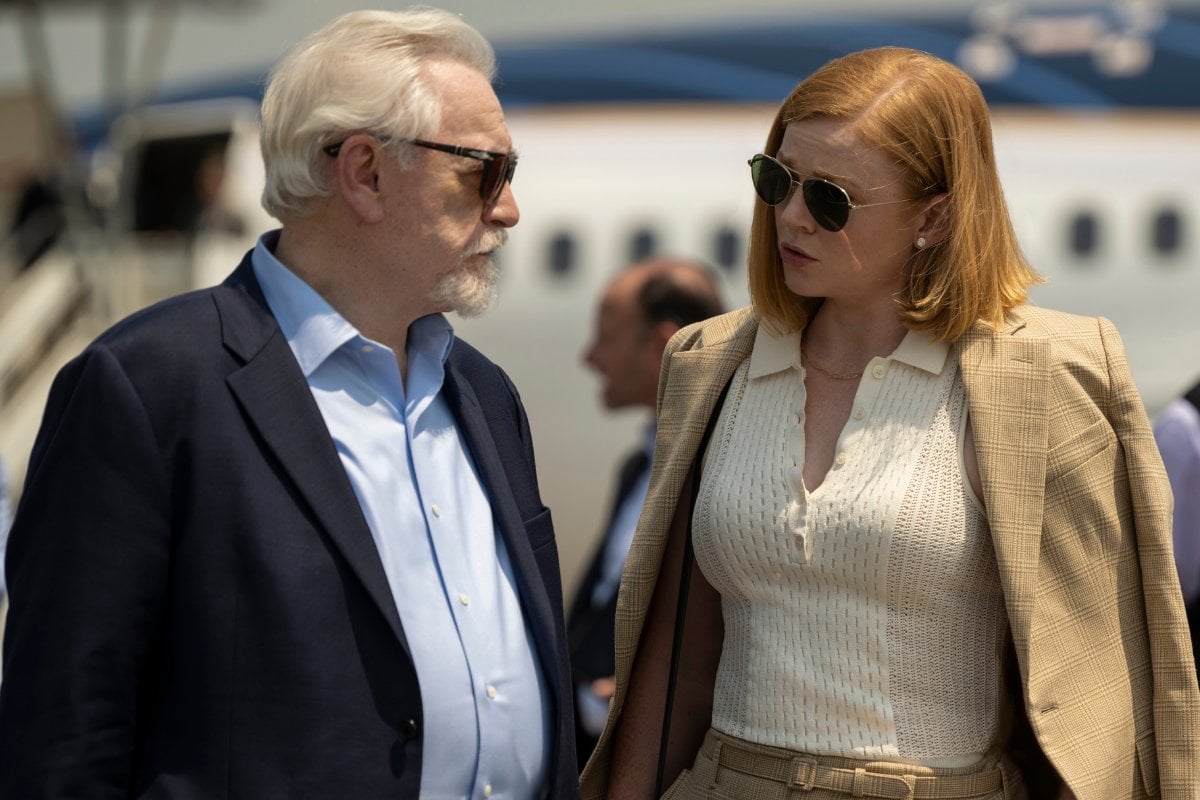 Watch the trailer for Foxtel's Succession. Post continues below.

It's been two years since the Roys were last on our screens, so you're probably going to need a little refresher about who's been backstabbing who and who is currently sitting on the Roy family throne.

Below I unpack everything you need to know before you watch season three of Succession:

OK, give me a quick refresher on the Roy family...

So, sitting at the top of the Roy family's big ole' pile of cash and power is patriarch Logan Roy (Brian Cox), who I like to call Daddy Roy. He's currently married to Marcia (Hiam Abbass).

He has three sons and one daughter. Kendall (Jeremy Strong), bit of a dickhead, ex cocaine addict, closest to the throne. Roman (Kieran Culkin), cheeky lil' fella, doesn't mince words. Shiv (Australian actress Sarah Snook), political fixer and the most competent of them all. And Connor (Alan Ruck), bit of a wet blanket and the eldest of the Roy siblings.

Shiv is married to Tom Wambsgans (Matthew Macfadyen), who feels inferior among the Roys, so he bullies underlings like sweet angel baby Cousin Greg (Nicholas Braun).

OK, so give me a quick recap of season one and two...

At the start of the series, the Roy siblings are gearing up to celebrate Daddy Roy's 80th birthday and he's planning to step aside and give Kendall control of the company.

At the birthday party, he does a big ole' backflip and announces he's staying on as CEO. He also announces he's giving Marcia two votes on the trust to decide his successor upon his death.

During an unnecessary baseball game and some private helicopter rides, the Roy siblings try to negotiate something for themselves in this new arrangement.

Then Daddy Roy has a stroke on the helicopter.

While he's in hospital, Kendall becomes interim CEO. As soon as the papers are signed, Gerri informs him that the company is $3 billion in debt and the creditor is entitled to demand full repayment if the stock falls below 130 points. Kendall tells the creditor to "get f*cked" which doesn't go down well.

Shiv asks Nate Sofrelli, one of her ex-boyfriends, who happens to be a political fixer (kind of like Olivia Pope but a white dude in jeans) to run a background check on Marcia.

Meanwhile, Tom is handed a bunch secret documents that confirm a massive cover-up of crimes committed on the company's cruises, including sexual assault and a potential murder. He tells Cousin Greg to shred them but Cousin Greg holds onto them instead because COUSIN GREG IS STRATEGIC; YOU SEE.

Daddy Roy starts getting real good at putting his socks on and is busy plotting his return to the throne.

At the family's annual foundation gala, Daddy Roy gets wind that Kendall might be going to announce that he's retiring, so he steals his speech and announces that he's actually returning to the position of CEO.

Kendall does a swear. And a stomp.

Kendall, Roman, Frank and Gerri work together to amass a majority vote in favour of removing Logan from his position as CEO. On the day of the vote, Kendall flies to Long Island to visit an ailing board member to convince her to vote with him. The island goes into lockdown and Kendall doesn't make it back in time to vote.

Meanwhile, Daddy Roy is in the boardroom yellin' at everyone and the vote ends up going his way.

When he hears the news, Kendall chucks a tantrum and cuts off communication with his family.

Daddy Roy decides to hold 'family counselling sessions' in New Mexico in which he just berates his children and makes them cry.

Kendall gets back on the gear and Daddy Roy leaks stories about his relapse to the tabloids. Shiv starts having an affair with Nate.

Roman organises Tom's bachelor party and convinces him to have sex with another woman. Meanwhile, Kendall is plotting a hostile takeover of the company with Stewy and Sandy.

Shiv and Tom get married at an English castle. Shiv uses the cruise scandal intel to stop ATN from slandering her boss Eavis over his wife's suicide.

In the final episode, Kendall tells Daddy Roy about his planned takeover bid. Then he does drugs with Andrew Dodds, a young waiter who Daddy Roy had just fired. They go searching for more cocaine, but crash the car and Dodds dies.

Daddy Roy tells Kendall he will bury the story if Kendall stops trying to take over the goddamn business all the time and goes to friggin' rehab for a bit.

Ok season two. Kendall is in rehab in Iceland but he's still on the gear and is also still plotting to take over the company.

Only 48 hours into his stay, he has to leave to give a public statement about that time he tried to do a hostile takeover. He simply says: "I saw their plan, and my dad’s plan was better" as Daddy Roy instructed him to.

The Logan family meet for lunch at their summer home in the Hamptons, and Daddy Roy tells them he's thinking about selling the company. Then he offers Shiv the role of CEO in private.

Eavis promotes Shiv to chief of staff for his presidential campaign. But then she tells Tom about the CEO offer and quits the campaign.

The Roys spend the weekend at the Pierce's estate. When Nan Pierce pressures Daddy Roy to tell her who will replace him as CEO, Shiv announces to the table that she has been chosen.

The following morning, Nan agrees to sell PGM to the Roys on the condition that Shiv is named Daddy Roy's successor on the day of the merger. Daddy Roy refuses and then the Pierces decide to go ahead with the merger, anyway.

New York Magazine writes an expose about the company's cruise line scandal. You know, just all the sexual assaults and murders they tried to sweep under the rug. Kendall, Roman and Shiv sit on a panel to address the scandal and Shiv suggests Daddy Roy should step down.

The event erupts into a brawl, and Daddy Roy hits Roman. Nan Pierce withdraws with deal because... I mean, the Roys be crazy.

Realising that Rhea will bear the burden of the scandal as CEO, Shiv gives Daddy Roy her approval to name Rhea as his successor.

Daddy Roy and Kendall testify in the cruise scandal case then Daddy Roy tells Shiv that a "blood sacrifice" will have to be made to appease the shareholders and then... sacrifices Kendall.

Kendall attends a press conference where he's supposed to take the blame. Instead, he throws Daddy Roy under the bus.

"The truth is, my father is a malignant presence, a bully and a liar. This is the day his reign ends," he says.

SH*T IS ABOUT TO GET REAL.

So, what's in store for season three?

Season three picks up right where season two left off.

Kendall, with the help of his tall sidekick Cousin Greg, is plotting YET ANOTHER takeover of the company.

Meanwhile, Shiv, Roman and Gerri had filed rank behind Daddy Roy who is dropping C-bombs left, right, and centre.

It seems like we're in for a whole lot more backstabbing in season three and this time it's not going to be behind closed doors.

The two alphas of the Roy family are publicly going head to head, and Roman and Shiv are sniffing for blood in the water, ready to jump ship as soon as they spot a power shift.

After a two-year wait, season three is already shaping up to be the best season yet.

This season is all about what the Roys do best - backstab each other and launch hostile takeovers of the company, and never actually do any... work.

They're like sharks in designer suits constantly circling a bloodied pile of money and power.

If you need more shows about rich people doing terrible things to fill in time between episodes, I recommend checking out The White Lotus on Binge, Arrested Development on Netflix, and Billions on Stan.

Succession Season 3 premieres on Monday, October 18 at midday AEST, available to watch On Demand on Foxtel.

The Catch-Up: Everything you need to know before you watch You season three.