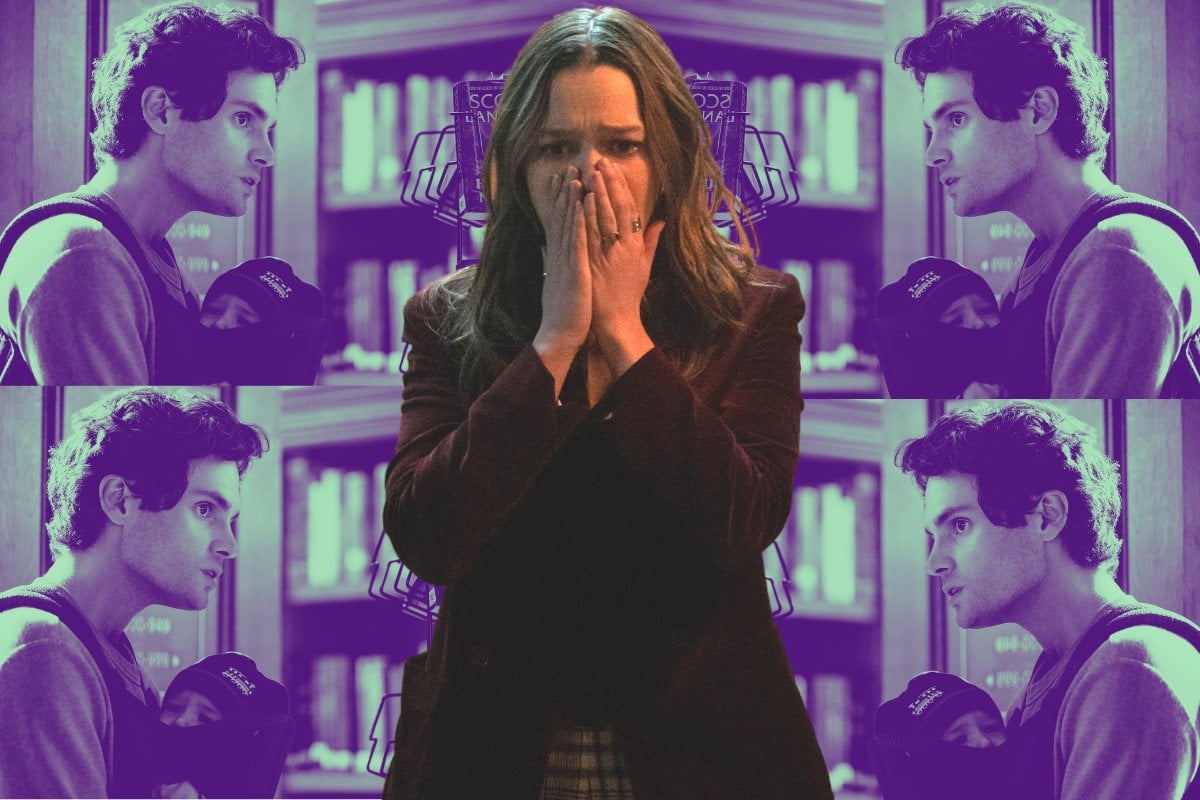 Everyone's favourite friendly neighbourhood murderer is back for a third instalment.

Season three of You lands on Netflix on Friday, October 15.

So does it live up to the previous seasons? And what actually happened in those seasons (apart from a lot of murder)?

Watch the trailer for You season three. Post continues below.

Below I unpack everything you need to know before you watch season three of You:

OK, so give me a quick recap of season one and two...

We first met Joe Goldberg (Penn Badgley) and his murderous ways back in 2018 when season one of You landed on Netflix.

When we were first introduced to grown up Dan Humphries, we learnt he was a mild-mannered book store manager who had a crush on a woman named Guinevere Beck (Elizabeth Lail).

We soon learned that Joe's crush was more... deadly than we originally thought. He stalked Beck, inserted himself into her life, started dating her, and killed anyone who got in the way of their relationship.

HE HAD A GODDAMN GLASS CAGE IN HIS BASEMENT.

When Beck discovered he had killed his ex-girlfriend Candace Stone (Ambyr Childers), and realised who he really was, he killed her too.

In the final scenes of season one, Joe thought he had gotten away with Beck's murder. Then Candace turned up at the bookstore, and she was a little peeved about that time Joe left her for dead.

This is where things get... complicated.

At the start of season two, our friendly neighbourhood murderer moved to LA to get away from Candace, and changed his name to Will Bettelheim.

He rented a room from a freelance journalist named Delilah (Carmela Zumbado) and became protective of her younger sister, Ellie, who is hanging out with a dodgy comedian named Henderson (played by Chris D'Elia... the irony) who once sexually assaulted Delilah.

Will/Joe promised himself that he was going to be a good boy from now on and not keep people in a glass cages/murder them.

But being a big ole' stalker/murderer/gentleman who enjoys a good book, he immediately found a new love interest/target in Love Quinn (Victoria Pedretti from The Haunting of Hill House).

The pair began dating and things seemed to be going well (and not so... murdery) then Candace turned up with a new identity and she was dating Love's hapless brother Forty.

Candace eventually confronted Love and told her who Joe really was, and Love... killed her.

Delilah found out about Joe's murdery ways and he locked her in the glass cage. Then Love killed her because she thought she was a threat to her relationship with Joe.

Joe then discovered that Love had killed her and Forty's childhood nanny after she saw her sexually abusing Forty.

Forty then confronted Love about Joe and was about to shoot him when he was shot and killed by Detective Fincher.

It was at this point that Joe realised Love was probably just as f**ked up, if not more f**ked up, than him and he planned to skip town and leave her but then... she told him she was pregnant.

So, what's in store for season three?

In season three, Joe and Love relocate to the suburbs of San Francisco to live that sweet suburban murdery life.

Love gives birth to their child and they try to fit in with the uptight suburban crowd.

But that's just the beginning.

There's a missing persons case, a sex party, a fire, a hunting trip, and many extramarital affairs.

But does it live up to the hype?

Season three takes all the over-the-top drama and murder from the previous two seasons and takes it to a whole new level.

The relationships become more complicated, the murders more frequent, and the plot twists bordering on ridiculous.

And the final episode sets the show up for the fourth season, which has already been announced.

If you enjoyed the previous seasons then definitely.

None of us are here pretending that You is a prestige drama. It's a dirty little thriller, full of plot twists, that's perfect for a weekend binge.

And season three simply takes that formula that has worked so well for the previous two seasons and amps it up a little.

Also, the glass cage is back.

Once you've binged your way through season three of You, I highly recommend checking out Clickbait on Netflix and Cruel Summer on Amazon Prime Video.

You season three is streaming on Netflix from Friday, October 15.