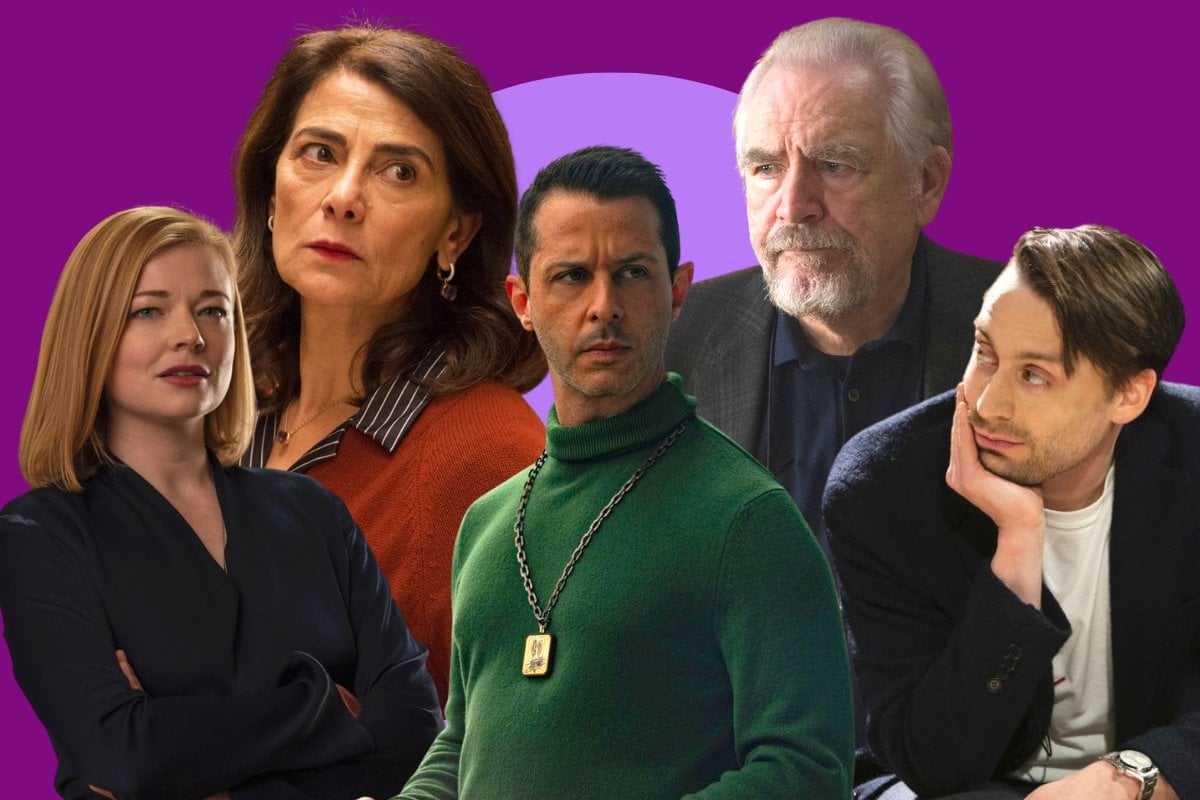 I don't think we're supposed to like anyone on Succession.

All the characters are terrible people, who do terrible things constantly. And yet, all the backstabbing and b*tching makes it the greatest television series of recent years.

Today, we're taking the Roy power struggle one step further, by pitting the family members against each other yet again, for a ranking.

This isn't necessarily about who is the best person, ethically (which would be none of them), or who is the most powerful (Logan, duh). It's more... likeability.

Who is still a terrible person, but... good about it? Whose scenes do we look forward to the most? Who, if I - god forbid - found myself stuck in an elevator with a Roy, do I think I would hate the least?

Non-family members like Gerri, Karl and Frank do not count here. The entire show is about this f****ed up family and their internal brawls, so I am excluding anyone without a blood or marital link. However, if Roman and Gerri make things official...

That would definitely change things.

So without further ado, here are those terrible, terrible Roys, ranked.

It didn't feel right to rank Rava, Kendall's ex-wife, and their children Sophie and Iverson (yeah, I did have to look up their names. I feel like that's not on me. Even Ken barely remembers he has kids.)

Rava seems to have her head on straight, and it's too early to know if those evil Roy genes have been passed onto the kids.

Then there's Willa, who is not yet family but... could be. She puts up with Con's sh*t, which is impressive in my books. She could also, eventually, become First Lady of the United States. Maybe then her play will get good reviews.

Shiv once called Connor the "first pancake", and I cannot sum him up any better than that.

Connor is an idiot, with delusions of grandeur so big he thinks running for president is... a good idea. It's lucky for him that he coerced escort Willa into being his live-in girlfriend (maybe fiancée), because she's much, much smarter than him, and has stopped his campaign from its inevitable crash and burn multiple times at this point.

I'm almost scared to write anything about Logan in case he miraculously jumps out of my TV and tells me to f*** off.

Logan Roy is the greatest TV villain of our time. The founder and CEO of Waystar Royco is just so ruthlessly evil.

Logan has no redeemable qualities. If he ever did feel any sort of positive emotion, they're long gone, leaving behind a megalomaniac who will do anything for power.

To him, his kids are just pawns on a chessboard (or boars on the floor) he can move around to keep himself firmly in control. The only way anyone else is getting his company is by prying them out of his cold, dead hands.

Logan is bloody great to watch on television, because he's SO. BLOODY. HORRIBLE, but the possibility of anyone like him actually existing is... terrifying.

Caroline has ditched the Roy name, but she's still one in spirit. She and Logan are at polar opposite ends of 'terrible parents' but they're both very much on that spectrum. There really was no hope for Ken, Shiv and Roman, was there? 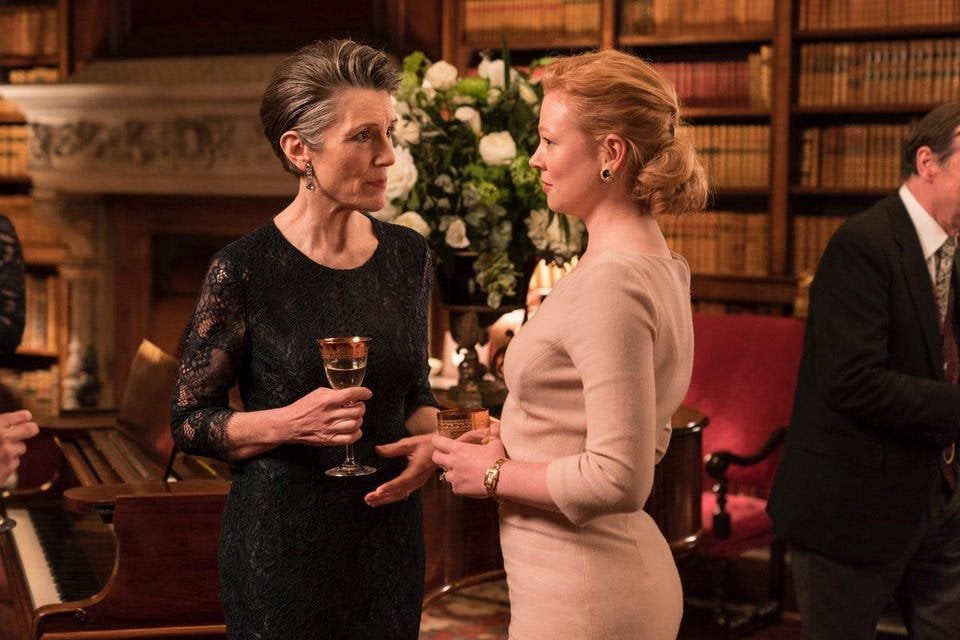 While Logan is firey - he'll burn you, and you'll see it coming - Caroline is such more understated in her disdain. She'll lure you in, drink in hand, and then cut you with an icicle.

On the surface, Logan's estranged brother's hatred of the Waystar Royco empire is noble. Except, well, ol' mate Ewan hasn't really left the family business behind at all. He holds shares and a seat on the board, and the business has netted him a nice little $250 million fortune, which he happily lords over his grandson, sweet angel Gregory.

It's the hypocrisy for me.

Tom wants to be part of the inner circle so badly, he would be thrilled at even being included in this ranking of Roys.

The thing is, Tom is pathetic. There's nothing he craves more than approval, especially from his own wife. He'll do anything, even things he doesn't... want to do (like an open marriage, or going to jail) if he thinks it will get people to acknowledge that he's valuable.

And then he takes all of that ~frustration~ out on Greg, who he uses as some kind of passion project. He bullies and manipulates Greg into doing his dirty work, but then also seems to really care about him.

NO ONE ON THIS SHOW CAN HAVE ANY KIND OF NORMAL RELATIONSHIP.

But, having said all that, Tom doesn't completely suck because Matthew Macfadyen acts the living sh*t out of him, and he's also given some of the best lines on the show ("You don't really hear much about syphilis these days. Very much the MySpace of STDs").

Shiv was always fighting an uphill battle here, even as a Roy. She feels like she's spent her whole life being overlooked and underestimated by the men in her family, because... woman. She's willing to do anything to prove them all wrong.

Shiv is smart and cunning, and she would probably make the most competent successor to Logan. She knows this, and it's the pursuit of this which makes her... suck.

In an alternate universe, Shiv could be a good person. She worked for progressive Senator Gil Eavis, even if most of his appeal was sticking it to her father, and has genuine flashes of morality when the cruises scandal blows up.

But ultimately, Shiv's thirst for power sees her bullying sexual abuse victims, throwing her husband under the bus and publishing a letter publicly labelling her brother a drug addict and absentee father.

Is Marcia still a Roy at this point? Unclear.

She was absent for most of the third season, on account of that time Logan cheated on her with Rhea, but she popped up again at Caroline's wedding in Italy. Sure, she could've just been after some Tuscan sun, but Marcia's smart, so surely she has a good reason for re-entering the Roy mess now.

We don't know much about Marcia's motivations, but I love how she can go from soft-spoken and unassuming to calling Shiv a sl*t in a flash.

Marcia knows where all the skeletons (especially that... waiter one) lie. She's more powerful than we give her credit for.

Kendall is the personification of cringe.

He is also the poor, beaten, damaged heart of the series, being pummelled as he jumps from breakdown to relapse to power play to rap performance to another breakdown.

Oh, and there was that wee spot of manslaughter, remember?

Kendall does so much terrible sh*t, but he always has a sad puppy desperate for love vibe that makes us root for him, regardless.

This show wouldn't work without Roman and his one liners.

While Shiv and Ken are two very serious, uptight fighters, and Con is just... clueless, Roman balances it all out with his off-colour jokes and complete lack of f***s.

Roman started off as a caricature of a snarky, inappropriate sex pest. He's still that, though without much sex, and with lots of added layers. He has evolved into a pretty good businessman without losing that 'I haven't worn matching socks in a decade' chaotic energy, and commanded respect from the Waystar C-suite without stopping telling them to f*** off.

And best of all (c'mon, you know it's true), Roman has developed a very weird psychosexual relationship with his father's General Counsel and sister's godmother. And somehow, made us... want more of that.

Roman's d*ck pic situation is the most uncomfortable thing I've ever watched on TV. And I bloody loved it.

Not a Roy by name nor nature, but you cannot help but root for hapless Cousin Greg. I'd suggest a round of applause, but I don't want to startle him.

Cousin Greg's character development has been great. Throughout the seasons, he's gone from wide-eyed newbie to blackmailer to important ally. Greg wants approval and power like everyone else, but he at least appears to have a greater conscience than most of this family (even if he wanted to sue Greenpeace).

But it's mostly the nervous energy that makes us love Greg: his two-stepping with Tom, the way in which he cannot escape the sidelines of this family no matter what, and how I don't think he's ever uttered a normal sentence in his life.

If Greg hasn't worked his way up from theme park character to CEO by the end of the series, we riot.

A
anon- 8 months ago

Reply
Upvote
I think you mean to refer to Greg's conscience, not conscious.  Most of the family are conscious (except when passed out from excessive alcohol consumption).

Thank you for letting us know, the article has now been amended!