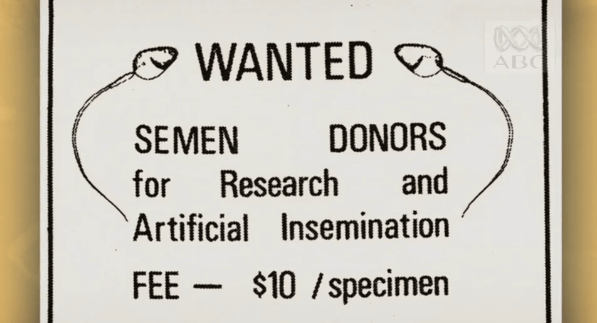 Is it possible to truly know who you are if you don’t know where you come from?

Ross Hunter, Jeff Springfield, Michael Griffiths and Myf Cumberland who were all conceived in the 1970s using anonymous donor sperm, go on their own personal journeys in the documentary, Sperm Donors Anonymous to find out.

The documentary to be shown on the ABC tonight night, follows the cautionary and inspiring journey these four donor-conceived adults undertake to uncover the truth about their genetic heritage and discover the identity of their biological fathers. Fathers none of them even knew existed until they accidentally discovered the fact in adulthood.

With more than 60,000 babies conceived through anonymous sperm donations in Australia, it is little wonder this subject is having a very bright light shone upon it, especially as the donors were always under the impression that they'd have life-long anonymity.

That line is suddenly a little blurry.

The search for their anonymous sperm donors was never going to be easy one, especially as the donations took place more than 40 years ago. Each of them first had to find out their 'donor code', the 2-3 letter and number code each speciment was given. Even when that was found, their efforts were hampered by misappropriated files, non-existent clinics, a sometimes archaic filing system and possible legal ramifications from divulging what was always expected to be confidential information.

Of the four donor conceived children, only three were successful in finding their biological fathers.

To fully understand how their stories though, it's important to remember that the 1970s were a much less ‘policed’ era and even though the advanced technology to freeze and store sperm had became available, the psychological and moral support, for all parties, was yet to catch up.

Initially, medical students from the local university were encouraged to donate their sperm for $10; it was often described as "no different to donating blood". It wasn't long, however, before demand for the donated sperm started to outstrip supply. Donations were then accepted from virtually any willing male around Australia.

Donor Ian Smith recently discovered he has fathered seven children with his donations, and is haunted by the likelihood he will never meet them. He admits that, at the time of donating, he had no real concept of what he was doing and readily admits that if he thinks about it too much, it can take him down a very dark path.

While the subjects of the show have similar stories (all were unaware they were donor conceived and only discovered the truth as adults), they all have very different reasons for wanting to find their biological fathers.

Ross Hunter, a 37-year-old Melbourne school teacher, found out he was donor-conceived as his father was dying of Alzheimers. Ross raced to find his donor, saying: "I'm not looking for another dad, I'm looking for someone who is genetically related to me."

He then discovered the hospital he was conceived in has been demolished. Although a little deflated, Ross was still relatively upbeat.

"When all you have are skerricks of information, they all become so very important. I will keep searching," he says.

Music Producer Jeff Springfield was 25 when he was told he was conceived via donor sperm. He was lucky enough to find some non-identifying information about his father such as his height, hair colour, his then occupation and blood type, but was still hungry to know more.

"You have to ask yourself, what do you want to achieve?" he says. "I want to know my genetic heritage".

Cabaret performer and songwriter Michael Griffiths, 42, discovered he was donor-conceived when he was 30 while reading his mother’s unpublished autobiography.

Michael's hurt is during the documentary is palpable.

"Mum and Dad are wonderful, but I couldn't understand how it could be kept a secret?"

Michael embarked on his search with the belief that "you can't truly know who you are without knowing where you come from".

Myf Cummford story is legendary in donor-conceived circles. She found her donor father, Michael Linden, through a newspaper article in 2001. Even though she has established a good relationship with her biological father, she admits the documentary might make it look as though her new family dynamic, which involves Michael as being ‘another grand dad’ to her children, is simpler than it actually is.

“It’s probably overstating matters to say that it 'works'. It’s more a case of us all being in this situation and having to function and negotiate that the best we can.

"We did, however, make a conscious decision to be really open and accepting, to not place any expectations on each other and to just let our relationship be what it is. And it is still evolving as things happen in our respective lives,” Myf says.

“I don’t think you can ever really prove either way that one is more influential than the other or vice versa. I would just say knowing both is absolutely fundamental to my sense of wellbeing and equilibrium. It’s also really hard to psychologically pick myself apart and conclusively identify what comes from where, however bits of myself that once were confusing and that I didn’t see reflected in my parents now make sense. And my children seem to have inherited little quirks that I can attribute to my paternal family also.”

Like most donor conceived babies of the ‘70s, parents were told to keep it a secret from their children. And even though everyone had the best of intentions at the time, in hindsight, it was ill-conceived and unhealthy advice for the authorities to give.

Myf believes this is why she hasn’t ever heard from any of the other three women who were also donor conceived from Michael’s sperm within three years of her own conception.

“I think it is most likely that they haven’t been told they are donor conceived. I haven’t given up hope of meeting them one day and would really love to, however slim the possibility of that eventuating actually is.”

While there isn’t a happy ending for all four involved in this fascinating documentary, it does lift the lid on a significant moral dilemma of our time, an era where new fertility technologies lead the way in creating babies.

And most importantly, it allows Myf, Jeff, Michael and Ross to share their struggles and joys as they grapple with whole new identity.

Sperm Donors Anonymous (Tuesday 9:20pm on ABC) is a cautionary and inspiring tale about the effects and ramifications of both the sperm donor and essentially 4 donor-conceived children and their families. And is a must see.

Podcast: A lively discussion of secret racists and old sperm.

‘I worked in a sperm bank. This is how I played God.’

‘I had a husband and three gorgeous kids. Then I had an abortion.’