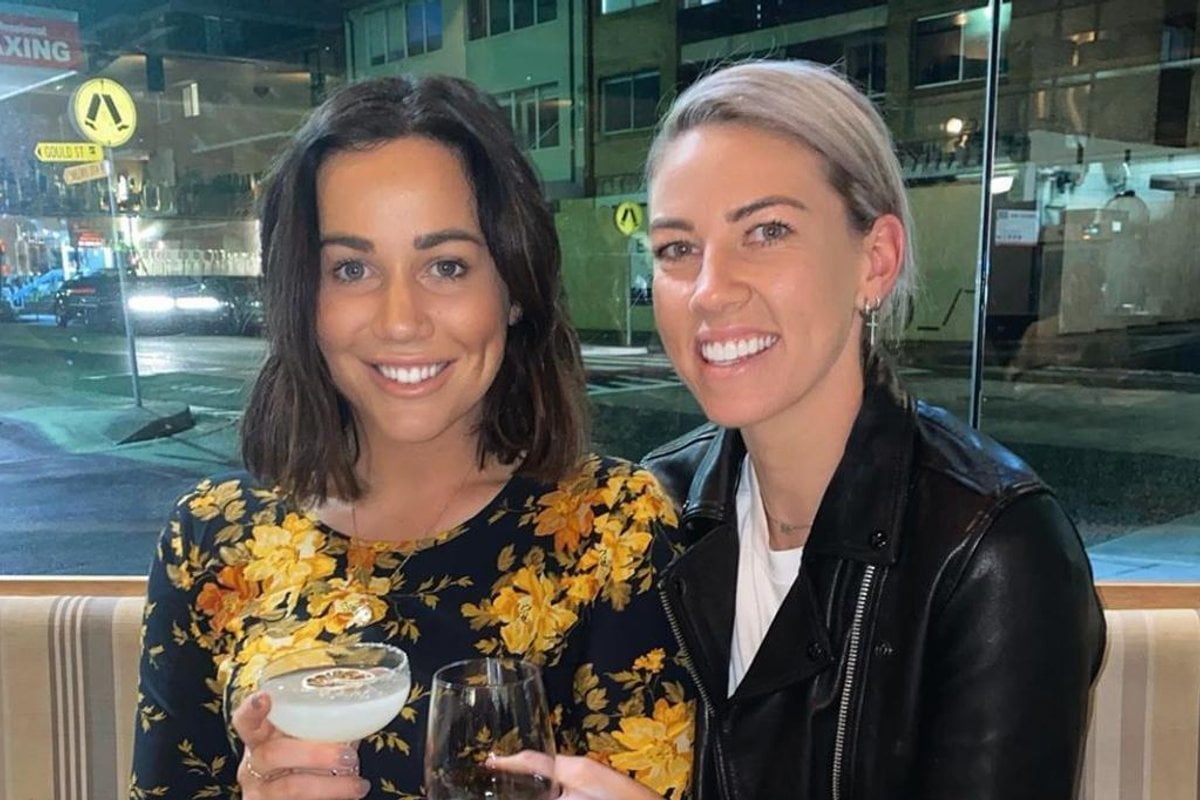 Around six months after Sophie Cachia announced her separation from her husband of four years, AFL star Jaryd Cachia, the entrepreneur and former 'The Young Mummy' blogger revealed she was dating professional soccer player Alanna Kennedy.

It was an intense - and oftentimes volatile - relationship, and one that Cachia is searingly honest about in her soon-to-be-released memoir Then There Was Her and in her chat with No Filter podcast host Mia Freedman.

Listen to Mia Freedman's full interview with Sophie Cachia on the No Filter podcast below. Post continues after audio.

"I don't like to use the word 'toxic' but our relationship at times showed signs of that for sure, which we both contributed to," Cachia, who identifies as 'sexually bisexual and emotionally gay' tells Freedman. "Situations I continually put myself in was [someone] that I don't even know now and I'd never known before."

Read more: 'Everything went blurry.' Sophie Cachia on the moment she was first attracted to a woman.

While she contends that she's a very strong and assertive woman, Cachia found relief in taking on a more submissive role in the relationship with Kennedy.

"Alanna is an incredibly strong woman as well. And I don't say I feared her out of fear for my safety or anything, but I found myself cowering down to someone all the time. Willingly," Cachia reveals.

"And that's not who Sophie's ever been. Five-year-old Sophie wasn't that and 31-year-old Sophie isn't that. And that's what I was attracted to. Because it was such a different relationship dynamic for me. I'd never known anything like that. So I thought, 'Oh this feels different. I'm gonna go with this.'

"It was so attractive to me [to have someone take control]. And again, I'd been a mum, I'd been looking after Jaryd, I hadn't looked after myself. And then all of a sudden, I had someone looking after me... I didn't need anyone to be making me money. But someone did shit for me. Someone goes, 'Hey, we're not doing that, we're doing this'. And I'm like, 'OK'.

"It could have been the littlest decision but I didn't have to think because I got told what to do. And I loved it. So whilst I have never ever wanted to make her sound controlling, because she's not, it was Sophie willingly doing this. Because I was like, 'Someone dominate me. This is brilliant'."

As one of her friends told her, it was like going to Disneyland for the weekend, where she could escape reality completely. "And it was. It was so lucrative," Cachia says. "But I had my blinkers on, because there's no longevity in that, that bubble wasn't going to last forever.

"She always knew that. She always told me that. And that's something I'll give her credit for because she did always tell me that."

Since Kennedy was a professional athlete, travelling to other countries was part and parcel of her job. She would tell Cachia, "I’m going to have to go away one day" and "I'm going to go overseas one day".

"Mind you, this was before COVID. We had connected long before COVID," Cachia says. "So if you'd told me the world was going to shut down and we'd be disconnected, it might have been different. But I’m going, 'Yeah, yeah, it's fine. With my work, I can still travel. I can do this. I've got money. I can come over, wherever you are'."

The wheels of their relationship began to fall off rapidly. The couple would fight about the smallest things, such as "who didn't have a nice tone on the phone or who didn't put a kiss on the end of her message."

Cachia admits both she and Kennedy were "needy". "I know she'll listen to this [podcast] and she will say 'nup, nup, bullshit. No way'. She was very needy as well. And absolutely, I was.

"In a way though, I was needy because she'd made me be like that as well. I never felt secure. She knew that. She knew that her actions were doing that. I did say to her once, 'I don't know if I'll ever get over this feeling. I don't think you'll ever be able to make me secure'."

It was just one of several red flags that she didn't pay enough attention to. "I just settled for a lot less than what I would want in a relationship. I'm very big on open communication, affection, appreciation, all these things," Cachia says.

"That is not to say she's a bad person. That's simply just to say she was not the person for me, which I can wholeheartedly accept now. I'm completely at peace now but for a long time I wasn't because I felt like I changed myself so much.

"All I wanted was for her to just commit - not commit in terms of a marriage sense, but just say, 'Yeah, I'm here. I love you'. And it very rarely came. So I kept saying, 'What can I do to make her stay?'"

The pair fell into a pattern of breaking up and getting back together - and it was always Kennedy breaking up with Cachia.

"[We broke up] four or five times, maybe. I was gutted every time. And every time, I went straight back," Cachia tells Freedman.

"I think I quote that in the book: She was my drug and I was addicted. And if you ask me why, I can't tell you. You know, I loved her. It's as simple as that... I'd been treated like a queen my whole life. Every relationship I'd ended, in high school, whatever. Really, I'd got everything I wanted my whole life. This is the first time someone was going, 'You're not having it'. So I wanted it more.

"That's why I wanted to make it such a feature of my book. We need to somewhat remove the person from it and go, 'That environment and that theme, that's huge in people's lives'.

"And I knew it's not about Alanna Kennedy. I love her as a person. Her soccer things sometimes pop up in my friggin' feed on Instagram. Like, I don't think I'll ever escape her. But I wish her so well. And I want her to have all the success and I truly mean that from the bottom of my heart."

While the pair have recently become engaged, back then their relationship was rocky. Each time Kennedy broke things off with Cacia, she'd run to Garrick. Then when she and Kennedy would reconcile, she'd promptly dump Garrick.

"While Alanna was very hot and cold with me - and there were times I was so angry and upset at her - what was scaring me was how unemotional I was to doing it to Maddie so easily. And that's when I knew that I just wasn't in the headspace to be making any big decisions, because how brutal I was to someone who had been nothing but so kind to me.

"But I was in this stage of my life where, we all hear it, 'follow your heart, go with your intuition'. And that was all telling me 'Alanna'."

Everything came crashing to a halt when Kennedy decided to end their romance once and for all, cutting off all contact. It was a very dark time for Cachia, especially as it happened right in the midst of the pandemic.

"The reality was I'd been cut off by someone who I loved so much and it wasn't just the break up. It was like we faced a situation where 'I might not ever see you again'. So you might break up with someone but they still live in the same city or, you know, there was a way that you may reconnect, but this was breaking up with someone and them literally moving to the other side of the world in a pandemic where there's no foreseeable future at all," she says.

She booked herself in for a doctor's appointment, knowing she needed help. "[The doctor] recognised immediately how bad things were. I was hurting myself. That's a reality. I was self harming," Cachia says candidly.

"And self harming was something that I hadn't done for a while. But it was something that became quite prevalent during that time, because I was feeling... I always saw self harming as a way when my chest hurts so much that I defer that pain somewhere else. And I just wanted to feel pain elsewhere in my body. And all of these things should have been signs that I wasn't in a healthy place.

"But again, I ignored them, which a lot of us do when we're in a pandemic. And so that night when she said to me, 'Don't ever contact me again', I screamed. I was walking around a lake and I screamed and it was raining and it was so cinematic; the wind was in my face and I had snot everywhere and I thought the hurt inside of my chest, I could no longer have. There was no panic attack that was going to get me through this.

"I didn't see any other option, but really hurting myself... these were actually the thoughts in my head: 'I really want to hurt myself, but don't accidentally kill yourself because that will be bad. But no, hang on. Wait, do you want to kill yourself though? Maybe that's a good idea.' Then it’s like, 'No, just break your leg'. These are such illogical thoughts going through my head. But they were so reasonable to me at that time.

"That night when I got home, Jaryd yelled at me like your dad would yell at you if you snuck out and went to a party. He pointed his finger in my face. I get emotional because he felt for me so much. But he said, 'You are never going back!' And he screamed at me with his finger and he said, 'Look at you, f***ing look at you! You are never going back!'

That's when she booked in the doctor's appointment. She had a number of sessions with a psychologist, but even that was difficult due to the lockdown. Everything had to be done via Zoom.

Now that enough time has passed, Cachia can look back on that time reflectively.

"The best thing she ever did - which I now can see, I didn't see at the time - was cut me off completely. Because she had recognised she could no longer do that to me as well. And I needed her to do that because I never would have been brave enough to do it," Cacia says.

"My children were always and will always be my light at the end of the tunnel. And I saw my kids hurting for so long in that period of time too because they saw mum hurting. And when I saw it start to affect them as well, I just knew that it's time to... only you can change this now.

"You can tell everyone, you can get all the help you want. But it's ultimately up to you."

Then There Was Her by Sophie Cachia is published by Simon & Schuster Australia and will be released on May 4.