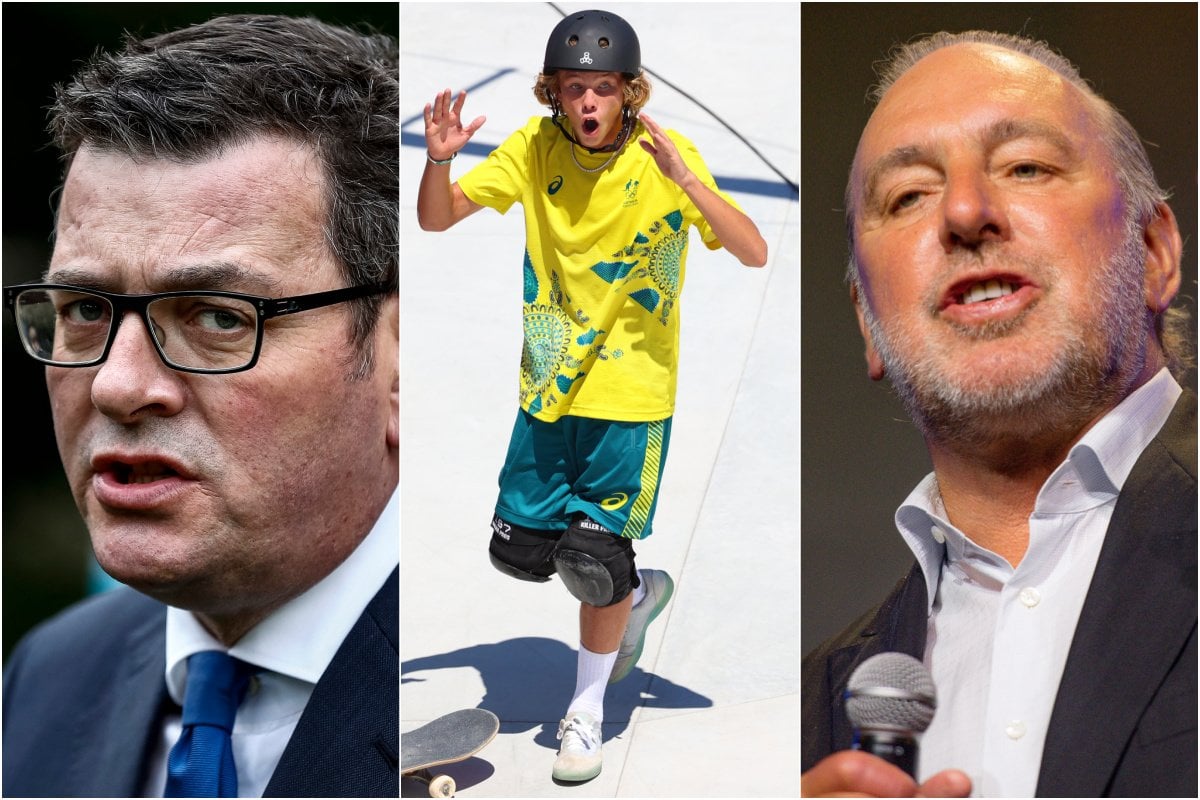 Vic awakes to lockdown with 15 people arrested during mass protest.

Friday marks day one of the restrictions, with more than six million Victorians finding themselves under stay-at-home orders again, only 10 days after coming out of the last lockdown.

Victorians are under the same rules that applied during last month's lockdown, including the five reasons to leave home, the five-kilometre travel limit for exercise and shopping, and compulsory masks indoors and outdoors.

Protesters, some carrying placards and most not wearing masks, gathered at Flinders Street about 7pm on Thursday and moved into Swanston Street as police in masks gathered to try to disperse them.

Flares were lit and the crowd chanted "no more lockdowns," the Herald Sun reported while residents of nearby apartments shouted "Go home, idiots".

Police said "hundreds of people engaged in an unlawful protest" and they made 15 arrests - nine people were held before their identity could be confirmed to issue fines and two were arrested for breaching bail and stating false names.

The seven-day lockdown announced by Mr Andrews began at 8pm on Thursday after the state recorded eight new cases of the Delta variant of the coronavirus.

Mr Andrews said the decision to lock down was "incredibly painful" but there was no alternative and he was determined to avoid an extended lockdown..

Thousands of close contacts are isolating and there are more than 80 exposure sites, with that number expected to grow on Friday.

People in Newcastle and the Hunter region have joined Greater Sydney in lockdown for seven days after NSW suffered its darkest day of the COVID-19 pandemic.

The one-week snap lockdown was called after five new cases turned up in Newcastle and eight more were found in the Central Coast region.

The state saw 262 new local cases reported on Wednesday, of which at least 72 were in the community while infectious.

Five people died in the 24 hours to 8pm on Wednesday - three men in their 60s, a man in his 70s and a woman in her 80s. None were fully vaccinated.

It was the deadliest day of the pandemic, and recorded the highest daily number of cases.

Also in NSW, a 34-year-old woman died of a rare clotting syndrome caused by the AstraZeneca vaccine, the Therapeutic Goods Administration reported on Thursday.

Six people have now died from the condition, out of about 6.8 million vaccine doses.

Premier Gladys Berejiklian says vaccination is the way out of the crisis which has shut down Greater Sydney for almost six weeks.

She said restrictions will remain in some form until 80 per cent of people are vaccinated, and wants 50 per cent jabbed by the end of the month.

Qld waits for clues on future of lockdown.

Queenslanders will have a better idea on Friday if a lockdown in the southeast is likely to end, with authorities hoping for another day of no mystery cases.

The state's COVID-19 cluster has been steadily growing - 16 new locally acquired cases were reported on Thursday.

But authorities have been able to link all of them to the cluster centred on schools at Indooroopilly, Spring Hill and St Lucia, on the northern side of the Brisbane River.

Chief Health Officer Jeannette Young will be hoping for the same on Friday.

If every new case can be traced back to that cluster, Dr Young can be more confident there are no undetected chains of transmission.

She is upbeat about the prospects of the lockdown lifting as planned on Sunday at 4pm.

Hillsong founder and pastor Brian Houston has been charged with concealing alleged child sex offences in the 1970s.

NSW Police will allege Mr Houston knew information relating to the sexual abuse of a young male but never reported it to police.

Mr Houston said he vehemently professed his innocence and would "set the record straight".

"These charges have come as a shock to me given how transparent I've always been about this matter," he said.

Hillsong Church said it was disappointed Mr Houston had been charged and asked that he be given the presumption of innocence.

"Given that this matter is now before the court, neither Pastor Brian or Hillsong Church will be making further statements," it said.

They handed a brief of evidence to the Office of the Director of Public Prosecutions, who gave advice to the police this week.

The founder of the Hillsong Church was among the people Prime Minister Scott Morrison wanted to be invited to a White House dinner when he visited the US in 2019.

The Wall Street Journal reported that the White House knocked back the request, which Mr Morrison only admitted making six months later.

Mr Houston was known to have been under police investigation for his failure to report his father's sexual abuse of children.

Aussies chasing gold in the women's beach volleyball and men's lightweight on day 14.

The Aussies scored two gold medals in the space of 10 minutes on Day 13 in Tokyo, before Melissa Wu won a bronze in the 10m board - her first individual medal at her fourth Games.

One more gold medal would make this Australia's most successful Games, and they will have a triple threat in the women's javelin final with reigning world champion Kelsey-Lee Barber, 2018 Commonwealth Games gold medallist Kathryn Mitchell and MacKenzie Little all involved.

It is the first time in Olympic history that Australia will have a full complement of three athletes in any throwing final.

The green and gold will also be well represented in the women's 1500m title race by Jessica Hull and Linden Hall, who have taken it in turns to hold the national record over the past couple of years.

Already guaranteed a medal, Harry Garside will take on Cuban Andy Cruz in the men's lightweight semi-final for the right to fight in the gold medal bout.

Hannah Green and Minjee Lee remain in contention heading into the third round of the women's golf, Sam Fricker and Cassiel Rousseau will begin their campaign on the 10m diving platform, while Marina Carrier is mid-field heading into the last day of the modern pentathlon.

Australia's Catholic bishops have called for greater action to combat climate change, saying the world is facing an ecological crisis.

Aboriginal and Torres Strait Islander people must be at the centre of caring for country, the Australian Catholic Bishops Conference said in its annual statement promoting social justice, released on Thursday.

"The rest of us need to listen, and to learn how we can walk together to care for the whole of creation - including one another," Bishop Vincent Long said.

Bishop Long acknowledged the world was facing a climate crisis, adding that Pope Francis wanted the church globally "to act with a greater sense of urgency".

"In Australia, passionate individuals, religious institutes, schools and organisations have been working on ecological issues for a long time," he said.

"I want to affirm and thank them all, and to urge the whole Catholic community to join them."

Tokyo has reported 5042 new daily coronavirus cases, hitting a record since the pandemic began as the infections surge in the Japanese capital hosting the Olympics.

The additional cases brought the total for Tokyo to 236,138, about a quarter of the national total. Japan reported more than 14,000 cases on Wednesday for a total of 970,000.

Tokyo has been under a state of emergency since mid-July.

But the measures, basically a ban on alcohol in restaurants and bars and their shorter hours, are increasingly ignored by the public, which has become tired of restrictions.

Experts say people are not cooperating because many feel less of a sense of urgency about the pandemic while the Olympics are going ahead and Suga's government keeps issuing the same requests for people to stay at home.

- France's highest court has upheld a new law requiring the public to hold a health pass to access bars and restaurants and health workers be vaccinated against COVID-19 by mid-September.

- Hundreds of people protested in the Indian capital Delhi for a fourth day, as outrage continues to build over the alleged rape and murder of a nine-year-old girl.

Reply
Upvote
A case of say one thing and do another and our PM rubs shoulders with him big time. PM altered his apology to victims in his speech to appease some other bloke he rubs shoulders with. Very concerning.
C
cat 10 months ago