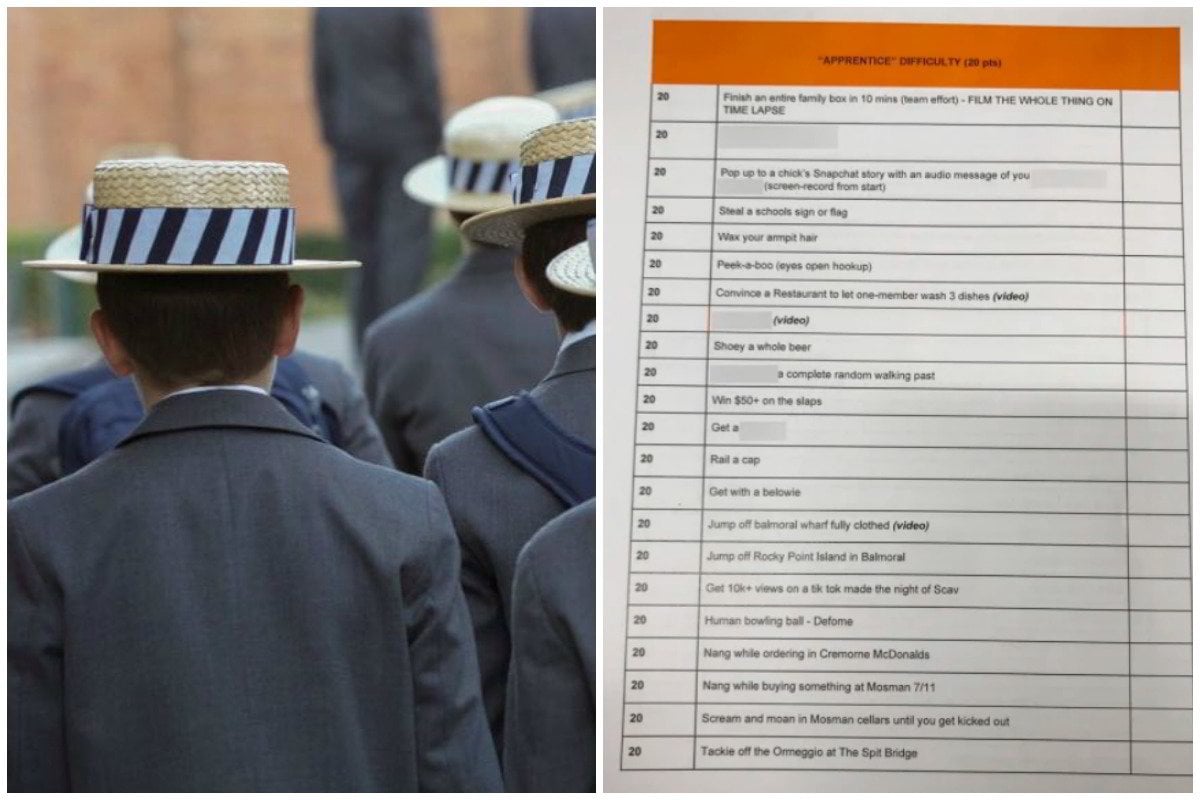 On Wednesday night, the Year 12 students at Shore School in North Sydney, an elite private school, were planning to undertake a scavenger hunt.

It would begin at Waverton Park, where the boys would form teams of five or six.

They would drink to excess, which is nothing new for 17 and 18 year olds. Then, they would embark on something they called the Triwizard Shorenament - a nod to the Triwizard Tournament referenced in Harry Potter.

The activities ranged from being relatively harmless (wax your underarm hair, jump off Balmoral wharf fully clothed), to criminal (steal a school sign or flag).

Challenges included drug taking and trespassing, but the most distressing features of the list referred to neither of those.

They included "spit on a homeless man", "sack whack [hit in the genitals] a random" and "deck [punch] a stranger". The most disturbing challenges also pertained to women, such as kissing a girl under the age of 15, kissing an "Asian chick" and having sex with a woman who weighs over 80 kilos, is aged over 40 or one deemed a "3/10 or lower".

According to The Sydney Morning Herald, the school became aware of the challenge and put a stop to it on Tuesday, alerting police as well as contacting parents and students.

We discussed the now infamous checklist on the latest episode of Mamamia Out Loud. Post continues below.

While the list is abhorrent and whoever is responsible for writing and distributing it should be punished - the problem extends beyond some words printed on a page.

Our horror is twofold. First, we’re grappling with what that list represents. What does it say about the men schools like Shore are producing? Second, we’re aware that everything that list assumes about their place in the world - privilege and a lack of repercussions for bad behaviour - is absolutely true.

That list says: I walk through the world knowing I am better than anyone else in it. They - the homeless, people who aren’t white, women - are pawns for me to play with.

That list screams entitlement and privilege and not even in a covert way. In a cruel way. In a way that says I want to use my power to hurt and humiliate.

But most of all, that list speaks to a truth we’d all prefer to ignore.

One of the points on the checklist is to get arrested. To be taken away by police in handcuffs.

For the students who go to Shore, whose parents are paying more than $30,000 a year to send them there, getting arrested as part of muck up day is a joke. A funny story to tell a group of mates around a boardroom table in 25 years.

But for the kid in some remote suburb that might be economically disadvantaged, being arrested isn’t a joke. It certainly isn’t a joke to a kid who happens to be Indigenous. Being taken away in handcuffs is the kind of thing that could skew the direction of their life, throwing them into a legal system that is not at all in their favour.

What is patently clear from this checklist is that the Shore boys know that.

Nothing scares them - not even being arrested - because nothing ought to scare them. The world they’re entering is a playground designed for them by men who went to similar schools. What better way to celebrate that than by spitting at a homeless man?

And if statistics tell us anything, it’s that those boys, the ones who want to assault strangers and think women who weigh over 80 kilos are worthy of ridicule, will go on to be our law makers. Our politicians. Our corporate leaders. And that checklist tells us the values they’ll take with them.

That’s why this list is more than just a laugh between school boys.

It feels like a potential glimpse into our future. A peek behind the curtain of how the upper echelons of society truly think.

That list penned by some Year 12 boys says an awful lot about the culture that produced them.

And that means we have to look a lot further, and a lot wider, than a handful of students who had their muck up day plans cancelled.

Reply
Upvote
1 upvotes
Over $30,000 of their parents hard earned money and on the cusp of adulthood this is all those boys could produce. An absolute, unequivocal, disgrace.
S
she says shhh 2 years ago