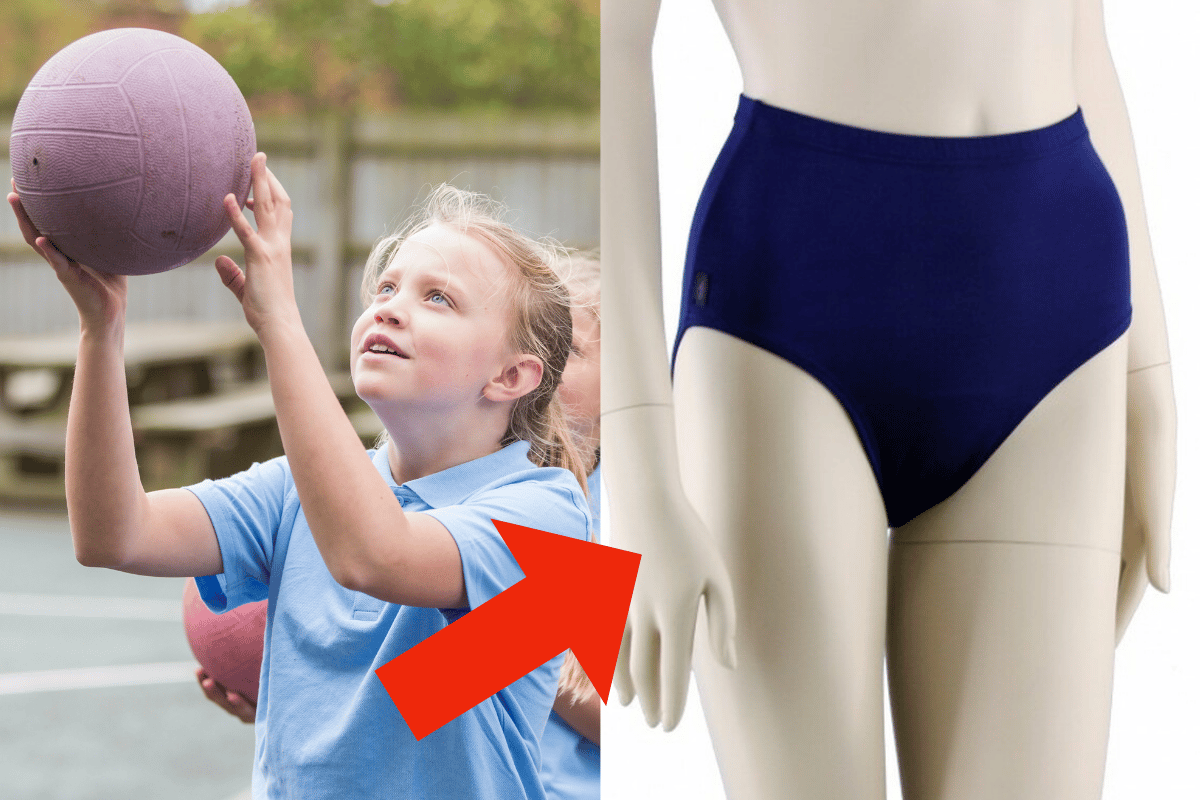 Recently I was cleaning out my wardrobe at my parents' place. It’s a terrifying cavern that displays my hoarding tendencies and is filled - FILLED - with ancient artefacts like my diaries from when I was seven, and, apparently, mouldy netball uniforms.

The uniforms needed to go, but as I was bagging them for the bin I noticed a pair of aggressively nylon, large underpants. My scungies. The uncomfortable underwear you wore... over your actual underwear... for sport.

I suppose the purpose of scungies was to cover up children underwear, so it was less problematic if our skirts flew up? Maybe it was to make us feel more comfortable about wearing short skirts as we ran around a netball court. As a side note, I would have been more comfortable in, you know, shorts like the boys got to wear. But that’s a whole other thing.

The reality was you ended up wearing two pairs of underpants while you ran around a court for an hour, underpants that dug into your legs and restricted your movements so everything was a bit of a waddle.

We just never questioned why it was necessary to wear them OVER underpants, instead of, you know, giving us uniform-toned knickers instead.

The only time I cherished my scungies was during my period - the perfect way to cover those Libra pad flaps.

I posted this musing to Instagram, just to discuss how bizarre the concept was. What I didn’t realise? Apparently, every state had a different name for these over-undies.

This has to be the weirdest term for sports underwear simply from a "where the hell did this come from" perspective. So I investigated. According to the Macquarie Dictionary, scungies is slang for men’s swimming briefs - yep, budgie smugglers.

One contributor said the word is "a cross between the words cungie (a sponge type sea creature) and speedos or swimmers". Do with that what you will.

No information on how this nickname made its way down to girl’s netball uniforms - I guess because they essentially look the same?

Apparently, Queenslanders call these "bummers". I can’t tell you how deeply wrong, yet completely accurate this nickname is. They hold your butt, therefore "bummers" makes complete sense. And yet, please stop this madness.

I was also told that they were called "bummies" for short. Dear lord.

There weren’t any explanations online for this, but this Queensland-based dancewear store has a whole section called "bummers" featuring dance shorts, so it’s official. I guess the Queenslanders were wearing far more sensible, bike short style scungies?

Controversially, some Queenslanders told me you call these "runners". This is a far less alarming name for them, but also less accurate. Haha! You can’t run in scungies! If anything, they constrict your legs so much we’re all lucky we didn’t lose limbs due to lack of blood flow.

I don’t know what you’re doing down there, Victoria, but calling scungies "chunders" is about as bad as it gets. Up here, in Normal NSW, to chunder means to spew. As in, "I ran so much as Centre that I chundered all over the mid-court".

The best evidence I found of this was "chunder-daks", undies that are pulled up over your tummy that cause wedgies. I mean, I guess this is incredibly accurate about the scungies experience.

Ah, New Zealand. Our normal, across-the-sea friends. You always show us up with great female Prime Ministers and appropriate names for items of clothing. Netball Knickers takes the cake.

Also, one New Zealander told me they’re so normal over there, they DID just wear plain old big underwear in uniform colours. See? Our better half.

I could not for the life of me find out what you guys call these. If you played netball in Tasmania or the Northern Territory, let us know in the comments section!

Western Australia is apparently stuck in 1812 and out here calling scungies "bloomers". Are we Edwardian women experiencing a fever-inducing malady caused by one too many turns about the room? Why are we wearing bloomers in 2022?

Look, as a true blue NSW gal, I’m sticking with scungies. It may be the most made-up name of them all, but you’ll never convince me to call those things anything else.