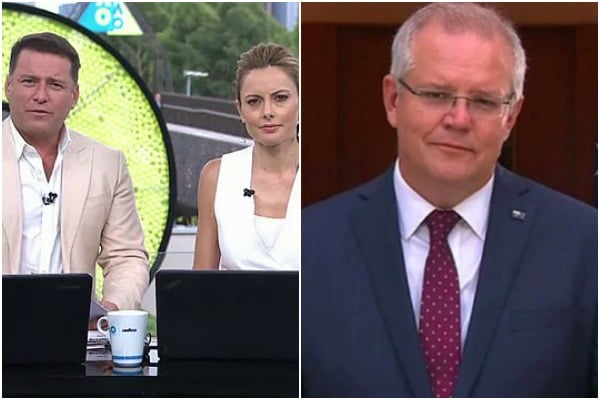 You could practically feel the tension through the TV this morning as Today show host Karl Stefanovic slammed Prime Minister Scott Morrison’s response to climate change.

Stefanovic spoke for many, as he accused Morrison of being “out of step” with everyday Australians.

“The country has been burning. We now have floods. We now have these horrific dust storms. Homes have been lost. We’ve lost lives. And the country is grieving. Farmers are shooting their own cattle.

Here’s a snippet of the interview. Post continues after video.

“I think there is a perception, right or wrong, that you aren’t leading the country on climate change,” Stefanovic said.

“People aren’t satisfied with what you are doing. Are you not concerned in any way, shape or form, that you are out of step with what everyday Australians are thinking and feeling during this crisis? And it is a crisis,” he added, before allowing Morrison to respond.

“We’ve got longer, hotter summers,” was the reply.

“I think there’s a lot of misinformation out there,” Morrison added. “For example, we will reduce our carbon emissions per capita by half between now and 2030. We are leading the world on renewable investments in technology and in energy.”

He was interrupted mid-spiel by Stefanovic who butted in to say: "Whether it's just perception, that's fine, but the perception is that you're not. And people want you do something more. They feel it."

Ruling out a carbon tax, Morrison pointed instead to building dams, and increasing hazard reduction as the way forward.

Australia has one of the highest rates of carbon emissions per person in the world, and has been criticised by world leaders for not reducing its targets enough. For example, we rely on coal burning for 75 per cent of our electricity, according to Geoscience Australia.

A UN report said: "There has been no improvement in Australia's climate policy since 2017 and emission levels for 2030 are projected to be well above the target".

When asked by Today show host Allison Langdon about disunity amongst his own frontbenchers on the issue, Morrison was quick to call the claims a "beat up".

NSW State Environment Minister Matt Kean has been vocal about Coalition MPs pushing for stronger policies to ensure "prosperity for future generations," but Morrison assured the Today hosts: "I don't know what he's talking about".

"I think Matt can focus on hazard reduction and I will focus on emissions reduction," he said.

"No, it's all a beat up,"Morrison replied.