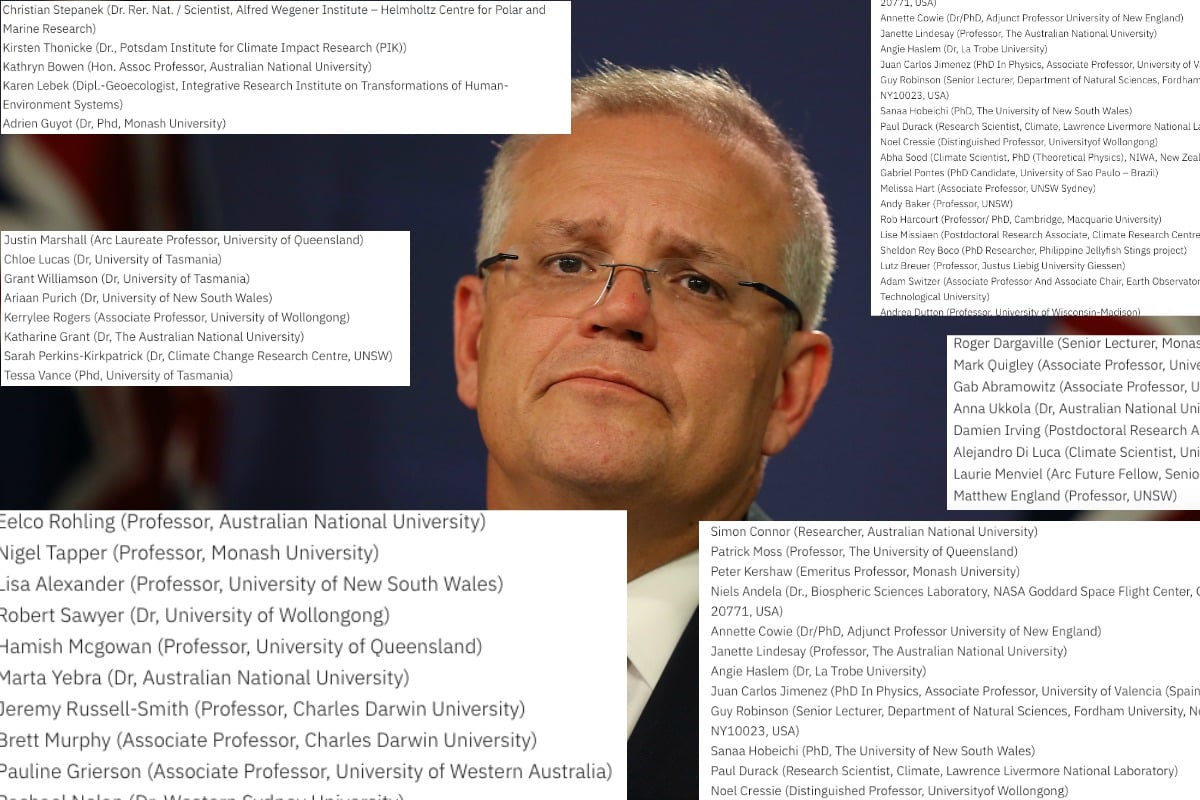 These are the first four names of the 274 scientists who have signed an open letter directed at our leaders (aka Prime Minister Scott Morrison and our government), just to give you an idea of the kind of calibre we’re dealing with.

To say that these people are experienced in this field is a big understatement.

These scientists, who are not just from Australia but around the world, have issued an urgent, stark warning to our government.

“Scientific evidence unequivocally links human-caused climate change to the increasing risk of frequent and severe bushfires in the Australian landscape. That same science tells us these extreme events will only grow worse in the future without genuine concerted action to reduce global emissions of greenhouse gases.

“We, the undersigned climate, weather and fire scientists, call on our country’s leaders and policymakers to develop science-informed policies to combat human-caused climate change. To be successful, these policies must urgently reduce Australia’s total greenhouse gas emissions and lead to constructive engagement and agreements with other world leaders for coordinated global climate action.

“We call on our leaders to unite to develop non-partisan, long-term policies that will enable the managed transition to net zero greenhouse gas emissions by 2050 that the scientific evidence shows is required to avoid dangerous human-caused climate change. The science is clear. It is time to show leadership and set a clear path to protect our country and way of life for future generations.”

The letter goes on to outline very clearly, their key points, their scientific reasoning, and 2019 in perspective.

You can read it in full here.

Their letter comes after one of the most terrifying summers we’ve ever experienced.

Devastating, damaging bushfires which have been burning up and down our country for five months: killing at least 33 people, destroying more than 12 million acres, and leaving more than a billion animals dead. They are our worst fires on record, but there’s one big reason (of many) that our leaders refuse to properly acknowledge.

Our globe is warming, and we, Australia, aren’t doing enough to stop that.

“The thick, choking smoke haze of this summer is nothing compared to the policy smokescreen that continues in Australia,” University of NSW climate scientist Professor Katrin Meissner said in a statement today.

“In spite of the scientific evidence and the extreme weather we’re living through – bushfires, hail storms and drought – the government still hasn’t joined the dots and taken action to tackle the root causes of the crisis,” Oxfam Chief Executive Lyn Morgain said in a statement.

It's hard to stay positive when we keep getting ignored.

It's hard because our government and our leader continues to ignore facts presented to them by experts with far more experience in the field than them.

He again said that we were "playing out part" in reducing emissions.

Not according to the 274 scientists who signed that letter.

Not according to the 23 fire chiefs who have been trying to meet with Scott Morrison since April to talk about climate change.

We keep being ignored.

What we're experiencing now are the effects of just 1C of global warming. If we remain on this trajectory we'll end up at 3C by the end of the century.

Our Prime Minister likes to remind us that we only make up 1.3 per cent of global emissions but we are in fact the 14th largest emitter of global carbon dioxide emissions out of 208 countries.

If every country emitting what Australia is emitting was lumped together however, the combined emissions would be as big as China and India combined.

These are the letters sent by former NSW Fires Chief Greg Mullins and 22 other former emergency chiefs to the Prime Minister in April and September predicting a bushfire crisis and requesting a meeting. #nswfires #auspol pic.twitter.com/djhHjHknAe

So we have to keep trying.

We have to keep writing letters, pushing the government and putting pressure on our leaders.

We have to. Because what's the alternative? We stop talking and nothing changes. That's just not a reality we can afford.

As David Attenborough said just a few weeks ago, "we have been putting things off, year after year."

The moment of crisis has come, and our current emission reduction targets are simply not good enough.

Just ask the 274 scientists who wrote a letter to our government.

Conservative parties are built around tradition and keeping things the same. They resist change. Adhering to science would mean overturning long-held beliefs, causing constant modernisation. This would make the Conservative party and what they stand for obsolete. We see the conflict of interest.

In order to follow climate science, we must make Conservative parties obsolete. They realise this and waste precious planetary time creating a religious discrimination bill to save themselves. The climate won’t wait for us to change. Australia will continue to enjoy stunted progress and a global reputation for backwardness the longer we allow faith to dictate politics. We cannot afford further Conservative governments. We must modernise and stop voting in dinosaurs. That is how we act on climate change.