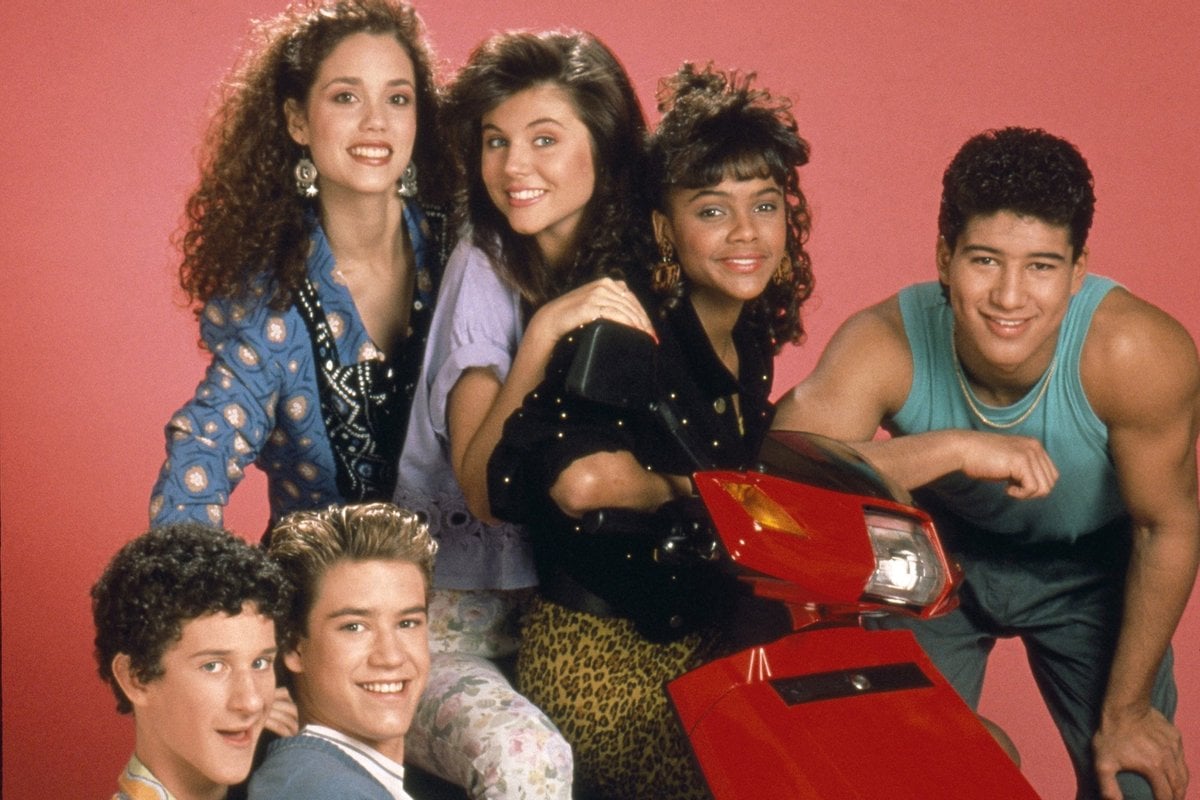 It’s finally time to go back to Bayside High.

Over 30 years on from the debut of Saved By The Bell, the sitcom has returned to our screens.

As a part of NBCUniversal’s new streaming service, Peacock, the brand new reboot features the children of the original characters as they embark on their new journey at Bayside High.

Watch Stan's official trailer for Saved By The Bell below. Post continues after video.

Here’s the show’s official synopsis: "When California governor Zack Morris gets into hot water for closing too many low-income high schools, he proposes they send the affected students to the highest-performing schools in the state – including Bayside High. The influx of new students gives the over privileged Bayside kids a much needed and hilarious dose of reality."

Amid the release of the new series, which premieres exclusively on Stan on November 26, we took a look back at what the original cast are doing now.

Mario Lopez was just a teenager when he played Bayside High's wrestling jock A.C. Slater in Saved by the Bell.

Since his time on the show, Lopez has become one of the most successful Saved by the Bell alums.

Amid his career in acting, however, Lopez made a transition from actor to entertainment journalist.

Since 2008, the now 47-year-old has hosted entertainment news program, Extra.

Lopez has also co-hosted The X-Factor, competed on Dancing with the Stars, released a memoir and appeared as himself in a number of shows, including Jane the Virgin and Brooklyn 99. He also co-created a comedy series with Seth Kurland called The Expanding Universe of Ashley Garcia, which debuted earlier this year.

In 2004, Lopez married actress Ali Landry after six years of dating. However, following claims that Lopez had cheated on Landry in the days before their wedding, the marriage was annulled after just two weeks.

After meeting Broadway dancer and actress Courtney Mazza in 2008, the pair married in 2012. The couple have three children together – a daughter and two sons.

Elizabeth Berkley stared as Jessie Spano in Saved by the Bell.

After her role as the go-getter who earned straight A's, Berkley was the first cast member to majorly distance herself from her character.

In recent years, Berkley has competed in Dancing with the Stars, guest starred in an episode of New Girl, and released a self-help book.

In 2003, Berkley married actor Greg Lauren. The pair welcomed a son together back in 2012.

While working on the show, Gosselarr dated three of his co-stars – Lark Voorhies, Tiffani Thiessen and Elizabeth Berkley – at different times.

Although Gosselaar will always be known as Zack Morris, the actor has gone on to have a career in TV, appearing in NYPD Blue, Franklin & Bash and Pitch.

Gosselaar was married to former model Lisa Ann Russell from 1996 until they finalised their divorce in May 2011. The pair share two children – a son and a daughter.

In August 2011, Gosselaar became engaged to advertising executive Catriona McGinn. They married in 2012 and have since welcomed a son and a daughter together.

Tiffani Thiessen appeared in Saved by the Bell as Kelly Kapowski.

After the show wrapped up, Thiessen went on to appear in another teen sitcom, appearing in Beverly Hills, 90210 as bad girl Valerie Malone.

Since then, Thiessen has had appearances in White Collar and Netflix sitcom Alexa & Katie.

She was also the host of her own cookery show, Dinner at Tiffani's, which featured guest appearances from her former co-stars Mario Lopez and Elizabeth Berkley.

Lark Voorhies appeared in Saved by the Bell as Lisa Turtle.

Although the actress appeared in the soap opera The Bold and the Beautiful and sitcom In The House and written three self-published books, Voorhies has stepped away from the spotlight in recent years.

Dustin Diamond played the nerdy Samuel 'Screech' Powers in the sitcom. He also appeared in the late-'90s spin-off, The New Class.

Since the show ended, Diamond has appeared in small roles in a number of movies and TV shows and toured the world as a stand-up comedian. He also appeared in Celebrity Big Brother in 2013.

Over the years, Diamond has seemingly lost contact with most of his co-stars.

In 2006, the now 43-year-old famously released his own sex tape, which reportedly featured a "stunt double".

In 2009, Diamond released a memoir called Behind the Bell, which included a number of outrageous claims against his cast mates.

Unlike his former cast members, Diamond won't appear in the Saved By The Bell reboot.

During an appearance on the OWN Network, Diamond later claimed that the book was ghost written and included fabricated details.

In 2016, Diamond served a three-month prison sentence for allegedly pulling a switchblade knife on a man during a bar altercation.

Since the shows wrapped up, Haskins has had a number of guest roles in Mad Men, New Girl, How I Met Your Mother, and more.

He has also released an album, which features covers of songs including 'Piano Man' and 'Mustang Sally'.

Saved By The Bell premieres on November 26 on Stan.