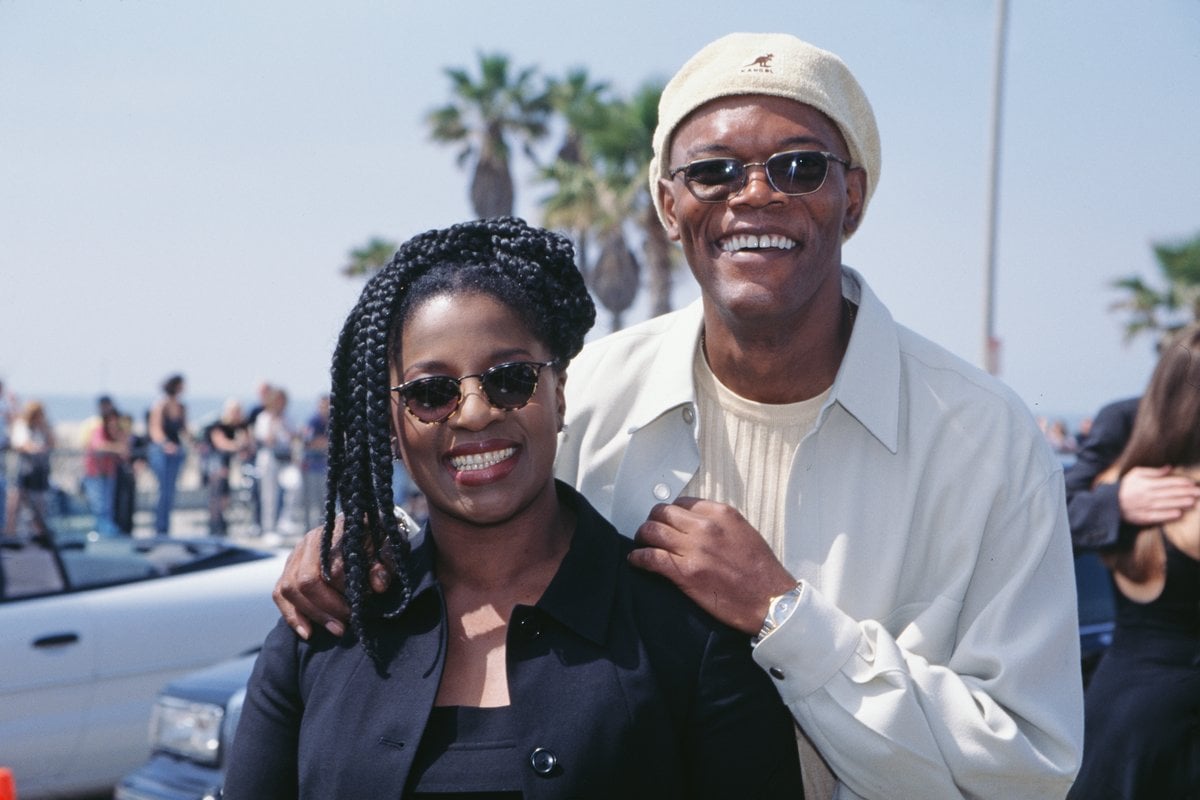 Samuel L. Jackson is one of the most bankable actors of all time.

In his 73 years, he has appeared in over 120 movies, which collectively have grossed well over US$13 billion, hits including Pulp Fiction, The Hitman's Bodyguard, The Hateful Eight, Kingsman: The Secret Service and Kong: Skull Island.

Jackson's star was rising in Hollywood in the early 1990s after he starred in a bunch of successful films. But behind-the-scenes, the actor was at his lowest, and was dealing with a serious drug addiction.

Since his college days, Jackson had been dabbling in various drugs including LSD, heroin and marijuana, along with heavy alcohol usage. By 1990, he was dealing with a serious crack cocaine addiction, and things were unravelling quickly. But by his side the whole time was his wife LaTanya Richardson Jackson.

The pair first met at a theatre club as students in the '70s in Atlanta, Georgia. Jackson was studying marine biology and LaTanya was studying theatre. Then in 1980, they wed.

"50 years ago we started dancing, it was all fun and games. 40 years ago today, sh*t got real! The slow drag of our lives pressed together, I led sometimes, sometimes she did," Jackson reflected in an Instagram post.

Two years after getting married, the couple welcomed their only child, daughter Zoe Jackson.

But the early years of their marriage were rocky, because of Jackson's drug addiction, which had begun to spiral.

"I had basically moved into the basement of our brownstone [New York townhouse]," he said to PEOPLE this week. "I was like the troll in the basement, and every now and then I'd come upstairs and hover around to do something. I was addicted and being crazy."

"I was a f**king drug addict and I was out of my mind a lot of the time, but I had a good reputation. Showed up on time, knew my lines, hit my marks," he told The Guardian. "So I was doing things the right way, it was just that one thing that was in the way - my addiction."

Things at home were becoming overwhelming for LaTanya and their daughter Zoe.

Referring to this period as her "villa in hell", LaTanya told PEOPLE that leaving Jackson didn't cross her mind.

"I couldn't do that because I felt as though God had spoken to me and said, 'Now, you can't leave this young man like this. Give him some help. And then, if you feel like leaving afterwards, we'll talk about it'. We'd vowed to be an intact revolutionary Black family. But it was very, very hard."

"I bought the cocaine. I went home. I cooked it. And when I woke up, LaTanya was standing over me," he said to CBS. "I was passed out on the floor. I never got to smoke it. And the next day I was in rehab."

LaTanya immediately began ringing around for availability at rehab centres, telling Jackson he needed to get help.

"I'd been getting high since, sh*t, 15 or 16 years old, and I was tired as f**k," Jackson said. "She didn't have to try to fix me. She could've just said 'get out,' and left me into the world, let me go and be whatever I was going to be. It was important for us to tell this story."

So Jackson went to rehab in order to get clean.

"She could have just taken Zoe and walked out and been done with me. But she didn't. That's a greater love than I will ever know. Because I don't know that I would've done that," he said to CBS.

While in rehab, Jackson received a script from director Spike Lee for a film called Jungle Fever.

He was incredibly keen on the role, but those around him weren't so sure if it was the right move for him. Mainly because he would be playing a "crackhead". And given he had only been clean for a short amount of time, perhaps playing a person addicted to drugs wouldn't help his sobriety. But Jackson disagreed.

"All the people in rehab were trying to talk me out of it," Jackson recalled to The Hollywood Reporter. "You're going to be messing around with crack pipes. All your triggers will be there. Blah, blah, blah.' I was like, 'You know what? If for no other reason than I never want to see you motherf**kers again, I will never pick up another drug'."

So in 1991, he starred in Jungle Fever and it was the first role he played sober. He has been sober ever since.

This year, the actor is celebrating his 41st wedding anniversary with LaTanya.

"We finally found that rhythm where there was no leader, we moved as one. We're still glued together, hip to hip, holding each other up, not covering as much of the dancefloor, but owning and loving the space that's ours," he shared recently.

As for what has kept them together these past four decades? The couple says it's a combination of being friends, loving one another and having common interests.

"The secret to our success? Well, I guess we still love each other," Jackson said to Us Weekly.

"Couples are always breaking up [in Hollywood]. Our job is just a job, you go to work, we go to work. We both come from the theatre. She's on Broadway right now doing To Kill a Mockingbird, I'm out in the world doing movies. We understand the bond we have, the commonality of experiences, the commonality of joy of the theatre and of our lives and of our daughter's life, so it's easy for us to stay connected."